New phase of matter was first predicted in the 1960s

Researchers have found evidence of a new phase of matter first predicted in the 1960s – the excitonic insulator.

ARC Centre of Excellence for Future Low-Energy Electronics Technologies (FLEET) researchers from the University of Wollongong (UOW) and Monash University conducted the study.

The research team observed the unique signatures of an excitonic insulating phase in nanoflakes of the chemical element antimony.

In semiconductors and semimetals, negatively charged electrons and positively charged holes carry electrical current by moving in opposite directions. However, if electrons and holes were to form electrically neutral pairs, the material might stop conducting electricity and become an excitonic insulator.

Scientists have predicted that excitonic insulators will have many novel and useful properties, with potential uses including for the development of new technologies for low-energy electronics for use in high-performance computing.

Since they were first proposed, breakthroughs in finding excitonic insulators have attracted keen attention among condensed matter physicists and two-dimensional material scientists. 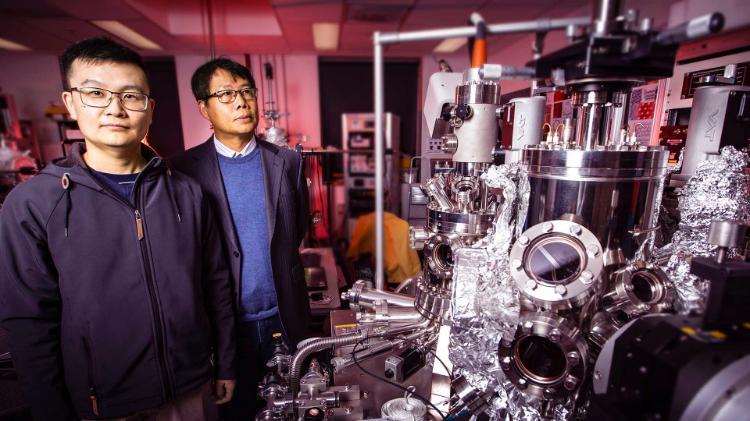 Dr Zhi Li and Professor Xiaolin Wang in the lab at UOW’s Institute for Superconducting and Electronic Materials.

The research paper’s lead author, Dr Zhi Li, is a Vice-Chancellor’s Research Fellow at UOW’s Institute for Superconducting and Electronic Materials (ISEM) at the Australian Institute for Innovative Materials.

Dr Li’s mentor and co-author Senior Professor Xiaolin Wang, Director of ISEM and node Director of FLEET, said the discovery of new phases of matter was one of the major goals of condensed matter physics.

“Over the past decade, ISEM has been at the forefront of efforts worldwide to find new classes of electronic materials,” Professor Wang said.

“We have invented a new class of materials – spin gapless semiconductors – which has been theoretically and experimentally verified by more than 100 groups in the world. We have also pioneered the study of some novel properties of topological insulators, which is a new class of quantum matter.

“Our findings of the new excitonic insulator together with the topological insulators and the spin gapless semiconductors are significant for developing new technologies for low energy electronics, which is the main goal of FLEET.”

The findings provide a novel strategy to search for more excitonic insulators, while further studies will be required to fully understand the rich physics of this new phase of matter.

“The experimental observation of the new excitonic insulator will boost our research in ISEM on future exploration for new classes of materials and physical properties,” Professor Wang said.

The ARC Centre of Excellence for Future Low-Energy Electronics Technologies (FLEET) is a collaboration of more than 100 researchers, seeking to develop ultra-low energy electronics to face the challenge of energy use in computation, which already consumes eight per cent of global electricity, and is doubling each decade.