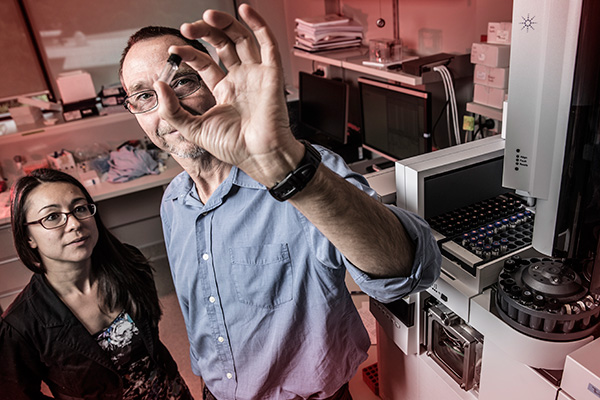 A study to determine how and why the main gene responsible for late-onset Alzheimer’s Disease regulates neuron survival is underway at UOW.

Professor Garner, Acting Executive Director at the Illawarra Health and Medical Research Institute (IHMRI) based at UOW, said while Alzheimer’s was first described in 1906, our understanding of this terrible disease is still in its infancy.

“Alzheimer’s is the leading cause of dementia and there is no curative treatment for this devastating disorder, which by 2050 is expected to affect more than 900,000 Australians.”

Professor Garner and his team are poised to isolate and characterise the enzyme that splits the protein ‘apoE’, which is encoded by the main risk gene for late-onset Alzheimer’s, into tiny fragments within the brain.

“Understanding how this gene controls Alzheimer’s risk will resolve a major unsolved question in the field and could reveal a new therapeutic avenue,” Professor Garner said.

The characterisation of apoE has previously been too difficult due to the complexity of brain tissue. However, as a result of a new collaboration with neuroscientist and stem cell expert Dr Lezanne Ooi, also based at IHMRI, the researchers have discovered a new way to model the enzyme split in the dish.

“We are using skin cells that have been donated by Alzheimer’s patients to unravel the mystery of why apoE is such an important risk factor in Alzheimer’s disease, “ Dr Ooi said.

“By converting the cells into pluripotent stem cells and neurons in a dish, we are able to study fundamental differences in the proteins made by cells from Alzheimer’s patients.”

Professor Garner and his team hypothesise that apoE protein fragments may play a neuroprotective role in the brain.

“We think apoE fragments bind to receptors on the surface of neurons, triggering pathways that promote survival,” Professor Garner said.

This research project is funded by a $416,000 National Health and Medical Research Council grant as part of a national strategy to target dementia-related diseases.

Professor Garner is also concurrently working on another groundbreaking project to find out whether a lack of vitamin-B12 could be associated with the development of Alzheimer’s.