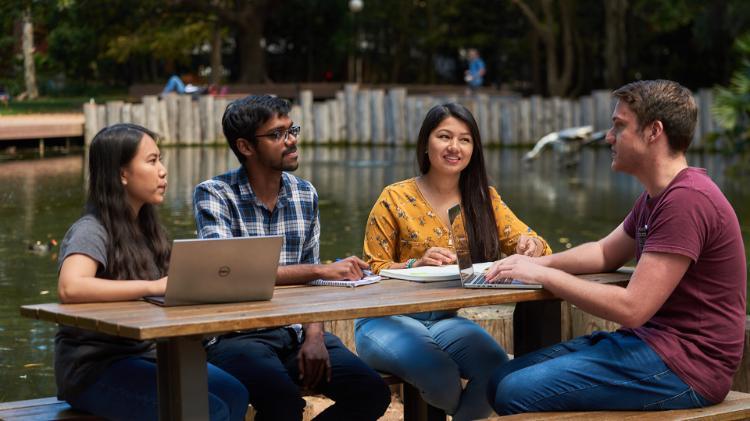 A new opportunity exists for donors who wish to make a greater impact by establishing a named scholarship within the framework of our flagship equity program, Transforming Futures.

Each scholarship will provide one student $5,000 per year for three years, totalling $15,000, and will be offered to commencing students who demonstrate the greatest need and commitment to community. Evidence suggests that this level of giving provides better outcomes for equity scholars and keeps them enrolled in their studies through to completion.

Generosity runs in the family: an interview with Peter and Elizabeth Moore. 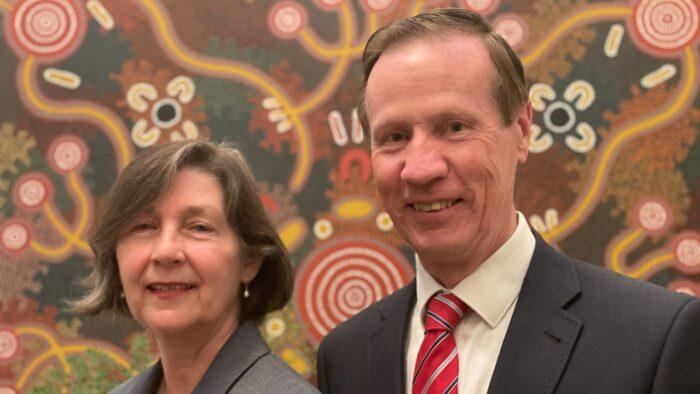 What does ‘philanthropy’ mean to you?

When we established our family foundation several years ago, we wrote the following mission statement: “to improve the lives of disadvantaged people living in Australia through education, the arts and mental health support, with a focus on supporting women and girls”.

The statement reflects our view that people who experience disadvantage deserve support and respect and that education can provide a pathway to a different life, one that is more satisfying and gives back to the community.

We also recognised at the start of this journey that we needed to focus our efforts. As a family of three women and one man with strong links to education, mental health, and the arts in Australia, we wanted to choose a mission that was relevant to all of us.

Our focus then moved to identifying areas where we could make a difference – mostly smaller organisations which were doing excellent work, but where our additional funding would make a material difference. We also sought to have a personal engagement with the organisations that we supported. In some cases, our engagement and advice have been appreciated as much as the funding and we receive a great deal of personal satisfaction from the relationship in return.

Why have you chosen to support student scholarships through the Peter and Elizabeth Moore Foundation?

Peter is an alumnus of the University of Wollongong and grew up in a new, immigrant-dominated suburb. He witnessed many talented students miss out on the opportunity to go to university due to their personal circumstances. Ten years ago, he decided to support a scholarship to help underprivileged students get to UOW. Over the years, the contribution has grown to the level it is today. It’s still a relatively modest contribution, but every bit helps.

Why is this cause important to you both?

Our parents had a strong belief in the value of a good education and we have benefited from their support and wisdom. We have passed that on to our daughters and believe they have the same values. While there are many pathways to a successful, fulfilling and happy life, it’s sad when someone has the talent and desire to pursue a career through education and is unable to do so.

What is your hope for the students who been the recipients of these scholarships?

How do you feel that you’re making an impact?

Peter has met several of these students and spoken to others on the phone. In all cases, the students would not have attended university without this help and the recipients were extremely grateful for it. For the students and recent graduates spoken to, the support was having a significant impact on their current lives and future prospects.

Do you feel a special connection with UOW, given your history with the institution and having had studied yourself here?

UOW is only one of four universities with which Peter has connections, but it was where he obtained his first degree and so the one with the greatest emotional connection. In addition, UOW has been the best at maintaining personal contact over the years and that has been very much appreciated.

What would you say to anyone else considering making a gift to support our students here at UOW?

While our family commitment continues to assist students in financial need, it is important to recognise that, at present, only 2.5 per cent of eligible students receive a scholarship. There are still many young people out there who have the talent to achieve great things for society, or even just a better life for themselves and their family over time, if given a helping hand.

A belief in the power of education: an interview with David Groves and Jon Preedy – son and grandson of Frederick Groves. 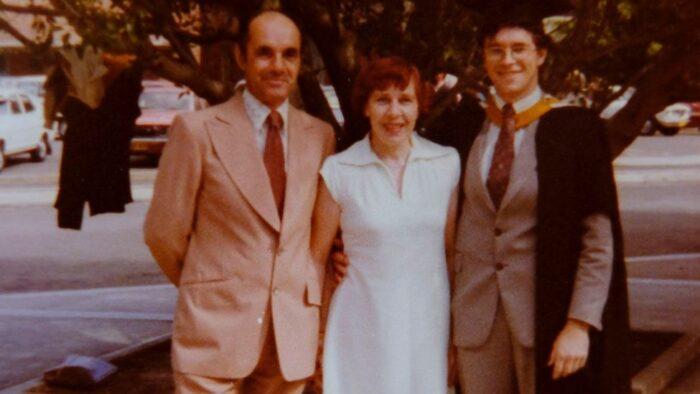 (L-R) Frederick Groves, Ann Groves and David Groves at his UNSW graduation in 1980.

The Frederick Groves Transforming Futures Scholarship was formed by six donors from one family, all united around a vision to create opportunities for future students. The family’s connection to UOW is multigenerational – Frederick is a former staff member at the Faculty of Engineering, while four other family members are UOW alumni, including David Groves, Jacqueline Preedy, Jon Preedy and Adam Preedy. Together with Edwina Groves and Christopher Groves, they are an inspiring example of the power of family giving.

We were delighted to talk to Jon and David about creating a legacy to honour Frederick Groves and reflect his values and his commitment to education and to the University of Wollongong.

Could you share some of Frederick Groves’ life story and explain why, as a family, you decided to name this important scholarship after him?

Frederick Groves was born in 1928 in Newcastle-upon-Tyne, England. He was the youngest of three children and had an interest from a very early age in all things mechanical, his father being a motor mechanic and managing a garage in the city of Newcastle, opposite St James’ Park football ground.

Despite wanting to continue studying in order to become a marine engineer, at his father’s insistence he left school at a very early age and trained as a fitter and turner. He did his National Service in the British Army’s Royal Engineers and served in Berlin, Germany. He married Ann Skipsey in 1953 and David and Jacqueline Groves were born in 1955 and 1956 respectively. He had a lifelong interest in education and, in the very late 1950s, he started part-time study to qualify as a mechanical engineer. In the very early 1960s, the family moved to Hereford where he continued studying part-time and working for Bulmers Cider.

In 1964 the family migrated to Australia, arriving in Port Kembla on September 10.

Frederick worked as a fitter and turner while at the same time completing his studies to become a mechanical engineer. After various jobs including time at Rennex Transport, BHP and Thirlwell & McKenzie, he was successful in obtaining a job as a Technical Officer in the Metallurgy Department at what was then the Wollongong University College of the University of New South Wales. This was the most rewarding and enjoyable time of his professional life and he went on to forge many long-term friendships with both staff and postgraduate students before retiring in the mid-1980s.

He thoroughly enjoyed an active retirement, travelling extensively in Australia and in the UK and spending much precious time with his five grandchildren. He died in Wollongong Hospital from complications relating to cancer in 1997.

We chose to name the scholarship after him because of his very strong personal belief in the importance of education, the pleasure he got from working at the University, and because he would have been so happy to help someone who could not afford to study at UOW. (David) 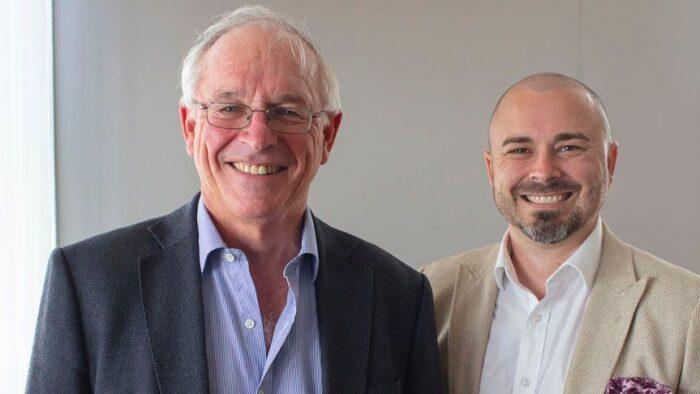 The fact that Frederick worked at UOW is incredibly important to us. What do you think he enjoyed most about working in the Engineering Faculty at UOW?

Frederick derived the most pleasure during his career at UOW from providing practical solutions for an academic team that just didn’t have the hands-on mechanical experience he had. He often told the story of starting work and being shown a room full of broken equipment, most of which he had working again very soon thereafter.

He took equal joy in helping postgraduate students with their research. We have clear memories of him driving over the coal dumps at Port Kembla Harbour in a university-supplied four wheel drive taking some sort of readings for one student’s research and enrolling in a photography course for another student so they could take better pictures of steel fracturing as it was bent. This was after he had delighted in designing and constructing the hydraulic equipment needed to bend the various steel samples and incorporating the necessary cameras. (David)

Why is this cause important to you as a family?

It is a way of both preserving the family’s connection with the University and of honouring the value Frederick Groves placed on education and hard work. (David)

What is your hope for the students who have been the recipients of these scholarships?

I hope that they succeed. Not just academically but in their personal lives, their families and social groups. I hope they will change their communities and challenge the status quo and I hope that, in time, they will look back and help lift up others in turn. (Jon)

Four of you are UOW alumni. Do you feel a special connection with UOW, given your history with the institution and having studied here yourselves?

I do feel a special connection with UOW. I laid the foundation for my career and met my future wife while studying for my degree, so the campus will always hold a place close to my heart. I grew up in the area and, when I finished high school, UOW felt like a natural progression. I’ve fond memories of the Duck Pond Lawn, the UniBar (both old and new), and the diverse cohort I studied with across the rambling campus. (Jon)

I also have a special connection with UOW. It was very small when I was there and you had a very close relationship with the students and staff at the time.

It became a University in its own right while I was studying there. When we graduated in 1977, we had a choice of taking a UNSW degree or a UOW degree.

I chose UOW as did most of my cohort. Separately from this scholarship, I have been donating to UOW for a number of years because of the connection I feel. In 2017, I became a member of the University of Wollongong Council and I’m a member of the Council’s Finance Committee and the Remuneration Committee. (David)

What does ‘philanthropy’ mean to you?

Philanthropy represents an opportunity. Having been able to achieve success in my career, I believe it is incumbent on me to “send the elevator back down” and help empower others to make brave decisions and aspire to great things. (Jon)

What would you say to anyone else who might consider making a gift to support our students here at UOW?

This kind of giving has the real opportunity to change lives – just do it! (Jon)