UOW’s Wollongong Campus has a number of natural creeks that flow from the escarpment through the campus.  There are also a number of artificial wetlands, ponds and swales.   The campus was once cleared farmland with very little vegetation. Since the 1960s it has been transformed into the beautiful grounds that we have today and provide habitat to a diverse range of animals.  The campus has five ponds and wetlands that have been constructed since the 1970's.  The management of these water features has focused on:

The McKinnon stream and pond was constructed in the 1994 (known at the time as Keiraview ponds).  It is an artificial water way and pond system. The water in the pond is pumped to the start of the stream near Building 30.  At Building 30 the water flows down the stream back into the pond to be re-circulated.

The pump within the pond became blocked with debris in 2015 which meant the pond needed to be drained and the debris removed.  This also identified issues with the pond lining which had to be resurfaced. At the same time the pond edge slope was also changed  to create a gradual slope.  This improved the pond safety but also provided a better habitat for frogs. To prevent future debris related issues the stream was revegetated with wetland plants.  These wetland plants act to collect the debris and also filter nutrients.  These works have improved the water quality and habitat for the insects, frogs and birds. 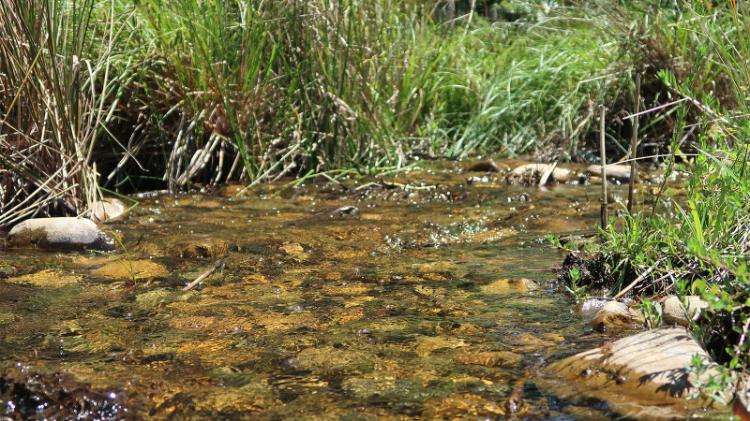 The Administration pond and headwaters (or dragonfly pond) is also an artificial system and was built sometime in the 1990s.  The water is pumped from the pond and circulated to the headwaters (dragonfly pond) where if flows down through the rocks and waterfall and back into the larger pond. The ponds are also known as the eel ponds by the landscape staff and there are over 90 eels living in this pond.  Minimum water levels must be maintained in this pond to prevent the concrete liner from moving. Nutrients also need to be managed due to the numbers of non-native ducks that live in this pond.

In 2016 actions were done to manage the nutrient load and improve habitat and safety around the pond.  Wetland plants were planted in the headwaters to assist with reducing nutrients and improve habitat.  However, planting tube stock did not working as the water birds were ripping out the plants.   To fix this problem a new method of wetland planting was trialled. UOW Landscape worked with Harris Environmental to grow 140 coir mats (1 metre square).  These mats were pre-planted with a mixture of native species for use in the pond system.  These mats were allowed to establish and grow in shallow water offsite for a period of six months.  They were then transported to UOW for planting. The process of planting was quick and easy.  The mats were placed in the pond and weighted with rocks to stop movement.  Over 630 plants were planted in 3 hours using this method.   The wetland plants established quickly and there were no plant losses due to bird activity. Wetland plants were also planted around the edges of the larger Administration pond.  Sandbags were used to build up the soil around the edges providing the shallow edge required for the plants to grow.

To further improve water quality more aeration and water circulation in this pond is required. 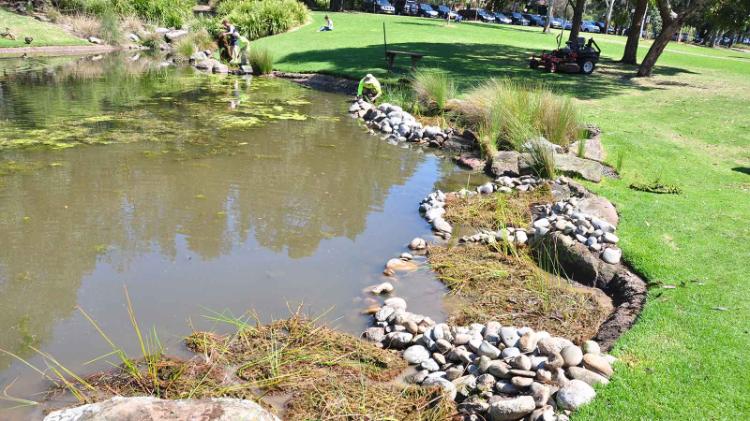 The Duckpond was the first pond created on campus and was constructed in the 1979.  It has been a focal point for staff and students on campus. In 1979 and 1980's, rainforest species were planted around the sides of the pond.  These were planned to screen the Duckpond and lawn from the Library.  Many of the species in the Janet Cosh Herbarium Campus Tree Walk are found in this area. 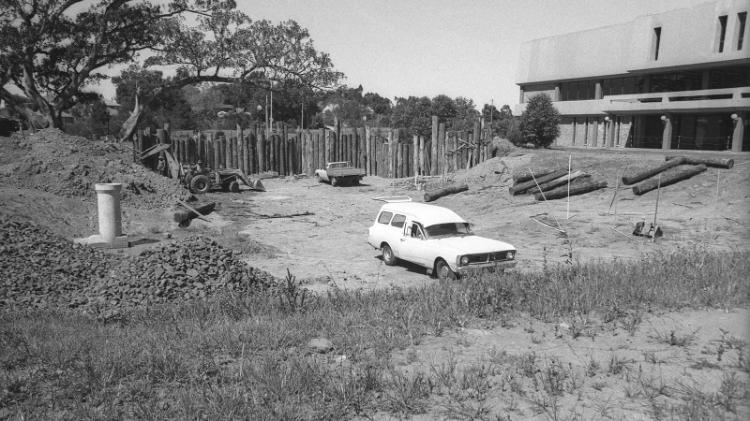 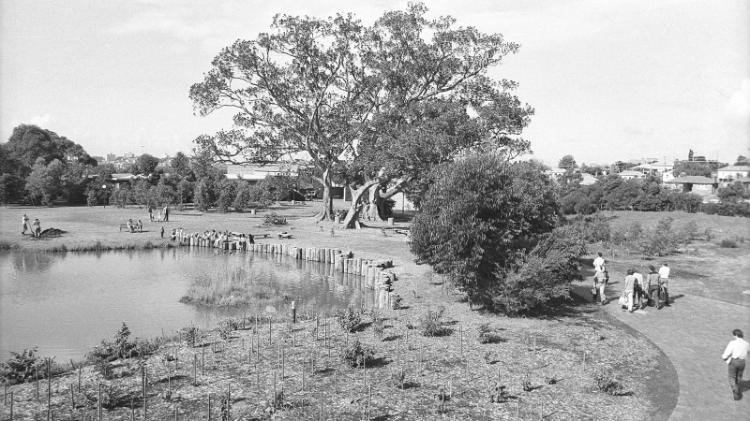 The Duckpond is fed by rainwater and the roof run off from the Library.  Due to odour and organic material build up the pond was drained in 2015.  The build-up of organic material was removed and a submersible pump and two aeration pads were installed to improve oxygen levels and water circulation.

The Kooloobong pond is in-stream and forms part of a natural waterway. The waterway flows from the escarpment, through the Kooloobong pond, and then downstream into the creek beside Northfields Avenue.   This pond was created sometime between 1976 and 1984 for flood mitigation.  The pond helps to retain and slow down the water during high rainfall events.  Plantings have been conducted to create a gradual slope at the edge of the pond to improve safety and habitat. 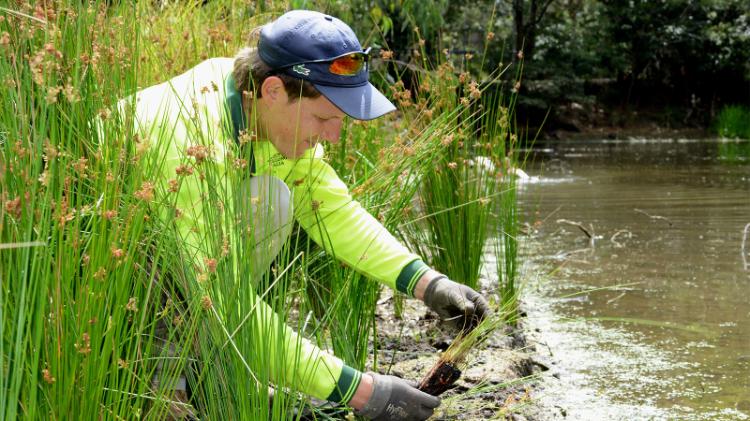 Image: Wetland plantings being conducted at the Kooloobong ponds in 2016

The Teaching and learning ponds

A proposal to create ponds near the Ecological Research Centre as a teaching and learning space was put forward in 2016.  Funding and approval was obtained and two ponds were created.  Within a matter of days the pond was home to four species of frog and a family of Australasian Wood Ducks.  Many water insects and dragonfly species were also observed. The pond provides a secure and safe location to send students for field activities. 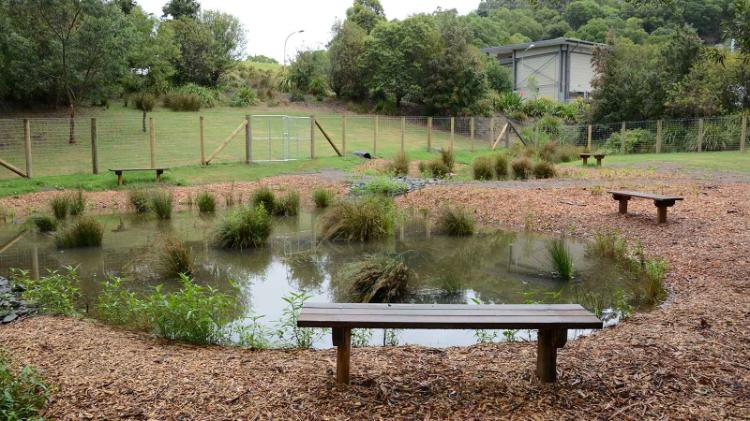 Image: Teaching and learning ponds in 2016