As a former reporter and long-time lecturer in journalism, Dr Shawn Burns understands words have power, that the language news organisations use can have impacts that ripple through society.

Indeed, it is this understanding that provided the inspiration behind his PhD, which examined how people with disabilities were characterised in news coverage of the National Disability Insurance Scheme (NDIS) and what they thought about it.

It was, in many ways, a personal endeavour for Dr Burns, whose son, Mac, has a severe physical disability. Dr Burns has been a fierce disability advocate for many years and said his PhD felt like his two worlds – of advocacy and media – colliding.

“The primary focus was to ensure that people with disability had their say in how they felt they were represented in the NDIS coverage, and the impact of that representation,” Dr Burns said. “It is incredibly important that news reporters, journalists and editors understand that their words have power. Words matter.

“Journalists and journalism are incredibly important when it comes to ensuring there is a greater understanding that disability is part of the fabric of humanity.”

What Dr Burns discovered, after six years of research, was not a surprise to him, but it was a call to action for the media to do more and do better when it comes to covering issues that impact people with disability and their families.

“People with disability, even in the coverage of the NDIS (a program designed to empower people with disability to be manifestly in control of their own lives and, in doing so, be significantly productive economically and socially), were represented as recipients of charity and gifts, burdens and objects of pity,” Dr Burns said.

“The people I spoke with simply wanted to be included in discussion about the NDIS and its implementation. They wanted people with lived experience of disability to be at the centre of the scheme, not somehow seen as added extras who don’t have an opinion or a say.

“People with disability were, understandably, dismayed with much of the coverage of the NDIS, most significantly in that it largely ignored the potential benefit of the scheme of the entire community and instead drew on familiar and comfortable news stereotypes of disability.” 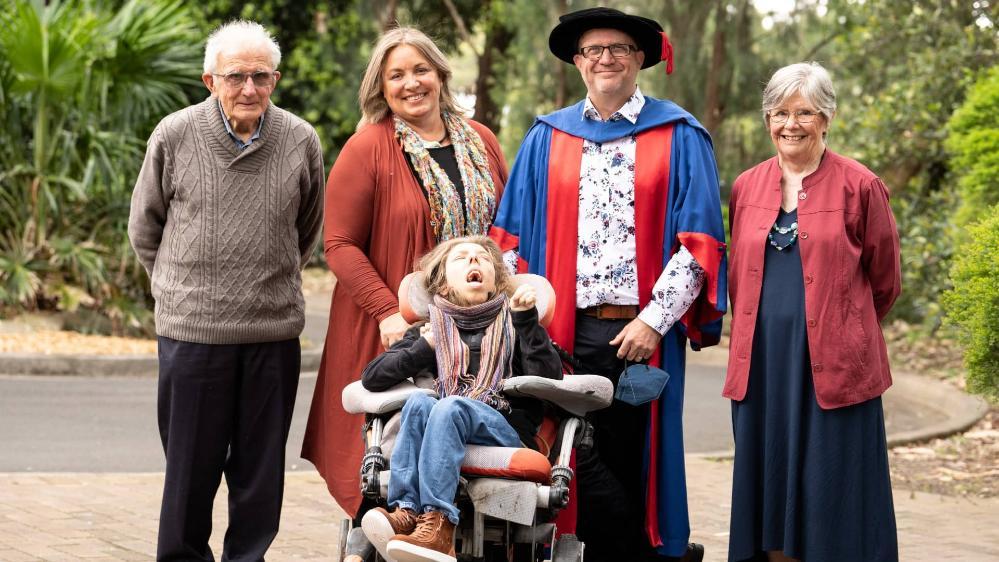 Dr Shawn Burns on his graduation day with his mother, Sue, his wife, Gina, his son, Mac, and his father-in-law, Brian.

Today (Thursday, 3 November), Dr Burns celebrated the end of his PhD journey during the Faculty of the Arts, Social Science and Humanities graduation ceremony at the University of Wollongong (UOW). The day represented the end of six years of research, of balancing his role as a full-time lecturer in journalism at UOW’s School of the Arts, English and Media with his part-time study, and family life.

Dr Burns said the past few years of COVID lockdowns had enabled him to finish his PhD, with the time spent commuting to work spent writing and editing. He also thanked his colleague and supervisor, Professor Steve Tanner, for his support and for “helping steer a course through occasionally rough waters”.

The pandemic has also, however, brought a level of deep concern for Dr Burns, who has spoken publicly about his fears for his son in the wake of numerous COVID waves over the past two and a half years. For that reason, Dr Burns and his family all wore masks during the graduation ceremony and continue to significantly isolate and shield Mac from exposure to the virus.

Dr Burns’ mother, Sue, his wife, Gina, his son, Mac, and his father-in-law, Brian, were all there to celebrate his graduation. He paid special tribute to Gina and Mac, for providing him with the “sacrifice and support” to finish his studies.

“As everyone who has done a PhD would acknowledge, it’s largely a test of endurance. Nothing is achieved without the support of others and, in many ways, it’s a selfish endeavour,” Dr Burns said.

“My wife and son were along for the ride and, thankfully, indulged me enough to get it done. I literally would not have completed it without Gina’s support, knowledge, and patience. Gina is an incredible disability advocate, specifically in the education space, and is a passionate and skilled campaigner for disability inclusion.”

One of the highlights for Dr Burns is being able to graduate alongside many of his students. A passionate and engaged lecturer at UOW, Dr Burns has overseen the careers of many established and up-and-coming journalists. He hopes the lessons he has gleaned from his research, and the empathy, compassion, and curiosity he has instilled in his students, will be evident in the next generation of journalists.

“I consider it a great honour to be graduating with some of my students and many other undergraduates. They are the reason I am still at UOW,” Dr Burns said.

“I love teaching and revel in their successes. My wish for all those graduating is that they maintain the clarity of thought that has got them to this moment, that they follow their passions, and that they use what they have learned and experienced at UOW to make the world a better place.

“The news media is a vital part of democracy, but it needs to acknowledge its flaws and be prepared to change. Change often comes with time and, hopefully, the journalism graduates from UOW are, and will continue to be, at the forefront of that change.”