Ten years ago, as a 15-year-old high school student, Dr Jessie Posar had a conversation that would change the trajectory of her future.

Her science teacher at Camden High School told Dr Posar that she had a natural aptitude for the subject, and particularly for physics, and should consider studying the discipline as she moved into her senior years.

“My teacher was trained in physics and she was fantastic. She was also female, and she really challenged the stereotype of what a physicist could be,” Dr Posar said.

“I didn’t really know what physics was, but I thought I would give it a go, and then I discovered that I really enjoyed it. I wasn’t necessarily gifted in physics but I was passionate.”

Now, at the age of just 25, Dr Posar is celebrating the end of her PhD in physics. Her thesis, under the supervision of Associate Professor Marco Petasecca and Distinguished Professor Anatoly Rozenfeld from the University of Wollongong’s (UOW) Centre for Medical Radiation Physics, explores the use of novel materials to monitor the bodies exposure to ionizing radiation during radiotherapy treatment.

She also completed her Bachelor of Science Advanced at UOW, a four-year degree with honours that gave Dr Posar an understanding of how to conduct research in the academic world.

The decision, to go to university and to pursue physics, was exceptional in many ways. Dr Posar was the first in her family to attend university.

“I’m from Camden originally, and at high school, it was always more focused on sport and agriculture. I think I was lucky enough to have that teacher, who encouraged me and had such an impact on my life. 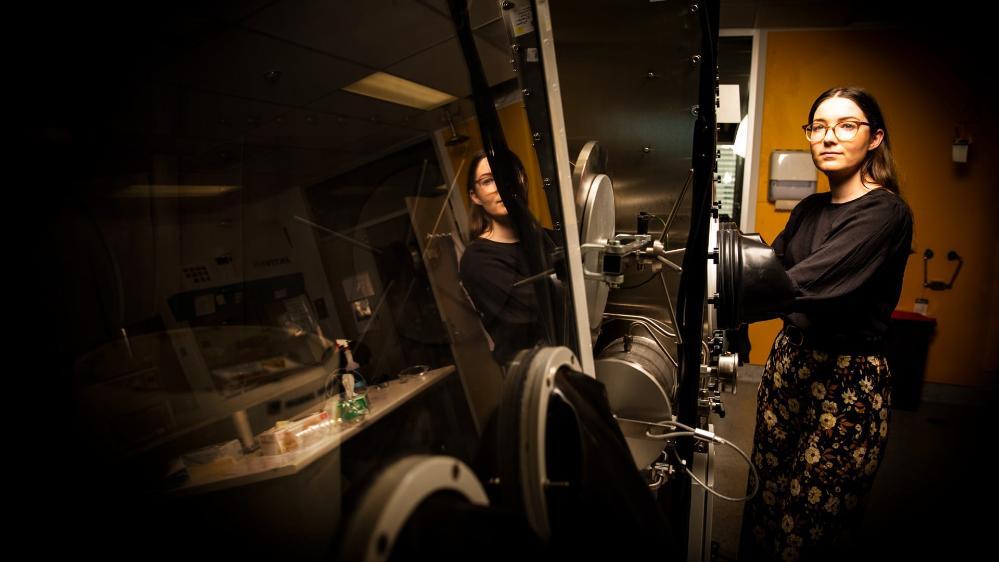 Dr Posar’s research has been inspired by her desire to make a difference in the field of cancer treatment. When a patient undergoes radiation therapy, their body is exposed to the radiation. Dr Posar has been investigating the use of materials that can wrap around the body, and ensure all the radiation is focused on the tumour.

“With the external beam [of radiation therapy] hitting the body, you don’t want to hit other vital body parts. You want to target the tumour, not the areas around it. The novel materials I have been working on are flexible, and they sit on the patient during treatment,” Dr Posar said.

While the product is not yet a reality, Dr Posar said her research and development in the lab has enabled her to create the product from scratch, and to then take the material into a hospital and test the response, to see whether it works in a clinical environment.

“There are a few design rules that still need to be worked out before commercialisation, but it is very promising,” she said. “It has a lot of potential. The end goal is for it to be used on patients in radiation therapy.”

For her PhD thesis, titled ‘Characterisation of Organic Semiconductors for Ionising Radiation Dosimetry in Medical Applications’, Dr Posar was recently announced the recipient of the Australian Institute of Nuclear Science and Engineering (AINSE) Scholar Gold Medal. It was a huge honour for Dr Posar, and one she never imagined would become a reality.

The medal was presented yesterday (Wednesday, 18 May) during the AINSE Annual General Meeting.

“When I found out I was successful, I was stunned. As a PhD student, you’re just taking each small step at a time, you never question if you’re good at it or if anyone else recognises the value. So, it was a nice recognition that the work I was doing was important and had an impact. It’s a good feeling.”

This month, Dr Posar also attended the Materials Research Society Spring Meeting in Hawaii, where she presented her research as a finalist for the Graduate Student Award. The awards honour and encourage graduate students whose academic achievements and current materials research display a high level of excellence and distinction. Dr Posar received Gold in the awards, the highest honour.

It also adds further weight to Dr Posar’s push to challenge the stereotype of who can and should study physics. It is a topic she is clearly passionate about, and throughout her time at UOW, she has volunteered with In2Uni and mentored other students, with the aim of encouraging more girls and women to pursue physics.

“During my undergraduate, I was one of the mentors to go into primary schools and high schools and talk about science and physics. I love breaking through the stereotype of what a physicist and a scientist look like. I love introducing myself as a physicist, and explaining what that means to young students.”

Dr Posar is now based at the University of Sydney, where she is continuing to develop the research from her PhD as a Postdoctoral Researcher. She maintains her connections with UOW, and with her supervisors, and looks forward to collaborating on multidisciplinary research in the future.

It is evident that Dr Posar, with a PhD and an impressive track record at just 25, will be a name to watch in the field of physics.

Her aim is to continue pursuing research and shatter the perception that physics, and science more broadly, is the domain of men.

“It can be difficult being one of few females in lectures or presenting research at conferences.. I want to try and change that in any way I can. I hope to see a future of diversity in science.”