"There's no place like..." explores place and our relationship to it

A new podcast by University of Wollongong (UOW) researchers uncovers forgotten corners of the Illawarra, exposing the beauty of places that are often overlooked or deemed ugly.

“There’s no place like…” started out as a conversation between Dr Chantel Carr, a human geographer from the Australian Centre for Culture, Environment, Society and Space (ACCESS), and local journalist and producer Jennifer Macey.

Episode one follows Dr Carr, Associate Professor Michael Adams, Dr Jenny Atchison and Dr Leah Gibbs as they explore the riverbanks of Allens Creek. The sounds of flowing water and chirping birds compete with the rumble of heavy machinery and traffic from the industrial estate through which the creek flows. 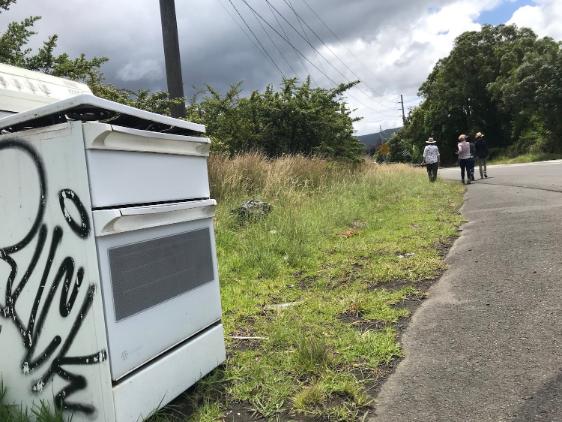 Associate Professor Adams explains how this little-known waterway flows through an industrial estate at Unanderra, reaching the sea at Port Kembla.

“The creek has been described as the worst creek in the Illawarra, most people wouldn’t expect to find much here,” he said.

“But this dirty little creek is actually bursting with life, from birds, oysters and water dragons to edible plants like blackberry, mulberry and olives.”

The geographers marvel at the abundance of life thriving on the banks of Allens Creek and the history the creek and surrounding escarpment holds.

Dr Gibbs notices a red cedar tree as she explores the creek and delves into the history of timber getters in the Illawarra.

“There’s this really rich history of the timber getters in this area, so pulling huge trees out of those slopes on the escarpment, over many decades and centuries, has had massive impacts in terms of increasing erosion and this has contributed to the deepening of these creeks,” she says.

The geographers discuss the significance the landscape has to Aboriginal people and the impact of development on the creek and surrounding life.

Dr Atchison says the growth of nearby suburbs including Mount Kembla, Cordeaux Heights and Farmborough Heights has affected Allens Creek in different ways.

“This creek is quite interesting in that it displays a typical feature in the Illawarra in that the creek has deepened because of the increasing run-off from the upstream areas. So these banks here are steep, quite possibly because there’s been a bit of extra fill, but also because of what’s going on in other places,” she says.

The geographers follow Allens Creek as it bends and winds through the steelworks on its way to the ocean at Port Kembla. Dr Carr (who started her working life at the steelworks as an apprentice electrician) explains the significance of the steelworks to the local area. 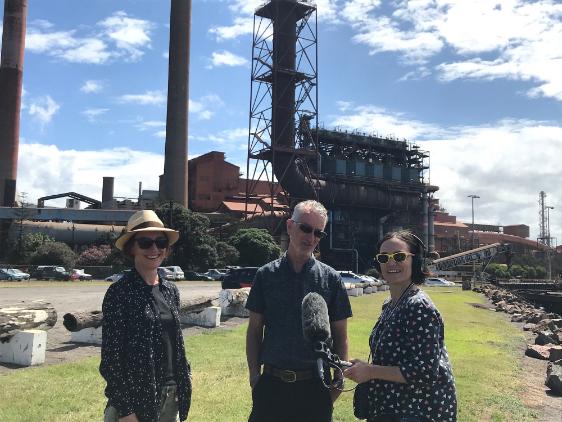 The researchers during the recording of "There's no place like..." Photo: Chantel Carr.

“We think of this landscape as an object within the Illawarra landscape overall, but it’s actually a number of different plants,” she says.

The “There’s no place like…” podcast has two episodes available to download now. Future episodes, related to a series of public lectures presented at Wollongong Art Gallery, will continue to invite listeners to rethink their relationship with nature. Upcoming topics will include Aboriginal women and cultural burning; the Great Barrier Reef; and the unexpected story of a black marlin swimming through a creek in the Port Kembla steelworks.

You can listen to the podcast at:  https://shows.acast.com/theres-no-place-like/