Ozone depletion in the stratosphere continues to affect not only ultraviolet (UV) radiation levels at the Earth’s surface but also climate in the Southern Hemisphere, an international study reports.

The paper, published 25 June in Nature Sustainability, reports on the complex interactions between ozone depletion, UV radiation and climate change, and how they impact human health, food and water security, and the environment. While ozone depletion has long been known to increase harmful UV radiation at the Earth’s surface, its effect on climate has only recently become evident.

Professor Sharon Robinson, from the University of Wollongong’s (UOW) Centre for Sustainable Ecosystem Solutions and one of the paper’s lead authors, said the ozone hole above Antarctica in particular was having a far-reaching effect on climate in the Southern Hemisphere.

“It is now clear that ozone depletion is directly contributing to climate change across the Southern Hemisphere,” Professor Robinson said.

“Ozone is a greenhouse gas, so the ozone hole has kept Antarctica cooler, pulling the westerly wind jet that circles the continent closer and tighter to Antarctica. This has increased the speed of the wind, making Antarctica cooler and drier, pulling other Southern Hemisphere weather zones further south.”

The Southern Annular Mode describes the north-south movement of the wind belt that circles the Southern Hemisphere. Analysis of ice cores shows these winds are the furthest south they have been for a thousand years.

“We are seeing changes across the Southern Hemisphere, from the pole to the tropics,” Professor Robinson said. “Some areas are getting more rain and some have become drier, which has a huge effect on plants and animals, including on agriculture.

“On the western side of New Zealand and South America it has gotten drier – the trees are growing less well and there’s less water in the hydroelectric schemes. The drying that Western Australia is experiencing is likely linked to this as well.

“At the same time, the eastern coasts of New Zealand and South America have become wetter and so, for example, you’ve got increased agriculture in the south of Brazil. In the same way, some areas of the ocean have become cooler and more productive and some have become warmer and less productive.”

Some species have benefitted while others have suffered. Warmer oceans are linked to declines in Tasmanian kelp beds and Brazilian coral reefs, and the ecosystems that rely on them. Cooler waters have benefitted some populations of penguins, seabirds and seals.

“At the moment penguins and seals are winning out because they are close to areas of the ocean that have become more productive so there is more krill and more fish. The penguins don’t have to swim as far to get food and therefore they have earlier egg laying and improved chick development.

“Albatross are also doing better because there is more wind. One study reports female albatrosses have become a kilo heavier as a result of ozone depletion. They’ve got better reproductive success because they can glide more and use less energy and therefore have more food to give their chicks rather than using it for further foraging.” 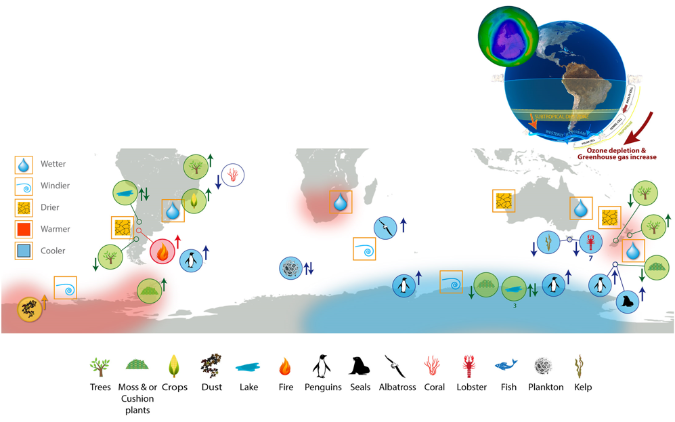 Above: A schematic of the environmental effects, and associated biological impacts, of ozone-driven climate change in the southern hemisphere.  Picture: Andrew Netherwood

The paper, written by members of the United Nations Environmental Effects Assessment Panel (EEAP), synthesises the leading peer-reviewed literature in this area from the past four years. The assessments produced by the UNEP EEAP address many of the United Nations Sustainable Development Goals.

The EEAP is one of three scientific panels that reports to the United Nations about global ozone depletion and UV radiation with reference to the Montreal Protocol. This environmental treaty has helped phase out production of ozone-depleting substances such as chlorofluorocarbons (CFCs), thus protecting the ozone layer, Earth’s main filter for solar UV radiation.

Associate Professor Stephen Wilson from UOW’s Centre for Atmospheric Chemistry is also on the EEAP and contributed to the paper. He said the main environmental threat to human health from ozone depletion came from the effect of UV radiation and climate change on air quality.

“Air quality causes millions of deaths per year and has been assessed as the largest global cause of deaths due to environmental factors. Even small changes in air quality in either direction have a large impact on public health,” Professor Wilson said.

“Air quality is driven by so many factors, from car emission restrictions to global warming, and the interactions between them are nuanced.

“As atmospheric ozone levels recover there will be winners and losers in terms of ground-level air quality. Modelling indicates that air quality in cities will improve, while regions outside those urban areas will be worse off.”

ABOUT THE MONTREAL PROTOCOL

The Montreal Protocol is the first multilateral environmental agreement to be ratified by all Parties of the United Nations (197 in 2008) and has been an enormous success, preventing increases in solar UV that would have had a catastrophic effect on human health, agriculture and the environment.

It has also done more to curb rapid climate change than any other human action to date. CFCs are also potent greenhouse gases, the ban on them has mitigated global warming. Without the Montreal Protocol CFCs would, by themselves, have caused a 2°C rise in global mean temperatures by 2070, climate models indicate.

The new paper reports that ozone levels in the stratosphere are recovering, and projected to reach pre-1980s levels by the middle of the 21st century, provided the Montreal Protocol is adhered to. Monitoring has revealed recent unexpected increases in CFC emissions. If these continue, they could reverse some of the gains that have been made. 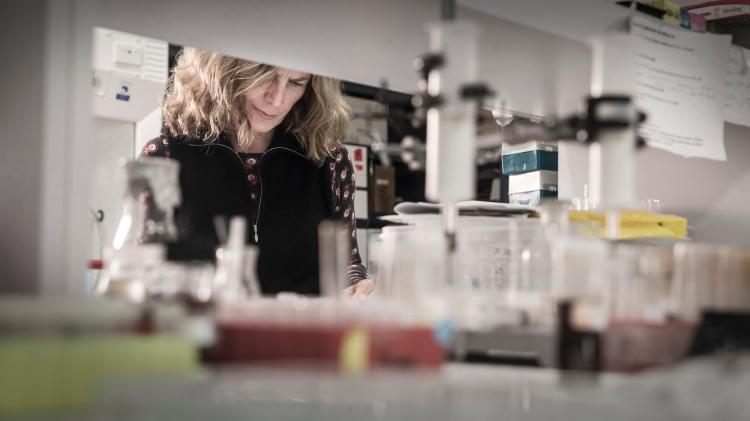