At first glance, Dr Erin Twyford’s PhD is about numbers. But, dig a little deeper, and it becomes apparent that her thesis is actually about people. It is about the ways numbers and people intersect to enable suffering on an immense scale, the ways that governments use numbers to control and harm their citizens.

Dr Twyford, from the School of Accounting, Economics and Finance in the Faculty of Business, used her Doctor of Philosophy to examine the role accounting played in the Holocaust, through the lens of Nazi Germany. It is a sobering and, at times, heartbreaking topic, one that brought together Dr Twyford’s divergent interests in accounting and history.

“My research looked at how governments use accounting to inflict harm on their citizens,” said Dr Twyford, who today (Wednesday, 24 July) graduated from the University of Wollongong (UOW).

“In Nazi Germany, the practice of accounting was essential to the persecution of the Jewish people. It enabled the government to put a number on human life. Accounting holds the power to transform the human in the numerical, a power that results in the dehumanization of people.

“Once people are stripped of their human essence, they become easier to govern and discipline in line with political or capitalistic aims.”

The extensive bureaucratic mechanisms of Nazi Germany, in which the entire state was precisely documented, enabled Hitler’s government to dehumanise its people, and thus reduce each life to a number in a book.

Dr Twyford’s thesis uncovered a dominant theory, in which governments use accounting to strip people of their economic life, by taking away their financial livelihoods and businesses. This is followed by robbing them of their political life, and then the loss of actual life. In the case of Nazi Germany, it was placing prohibitive and onerous taxes on the Jewish people, before instigating an extensive series of anti-Semitic laws that placed strict prohibitions on their movements and freedoms. Once the Jewish people had been stripped of their autonomy, and dehumanised, the next step was to take away their actual lives. This, Dr Twyford said, was primarily orchestrated through concentration camps, with Zyklon B, a German-produced pesticide, used as a tool of mass extermination.

Dr Twyford details how the rise of professional accountancy in Germany went hand in hand with the rise of the Nazi State. Thus, accountants were forced to adopt the government’s anti-Semitic views and practices. With the help of accountants, Jewish people were excluded from the German economy, in a process known as Aryanisation. 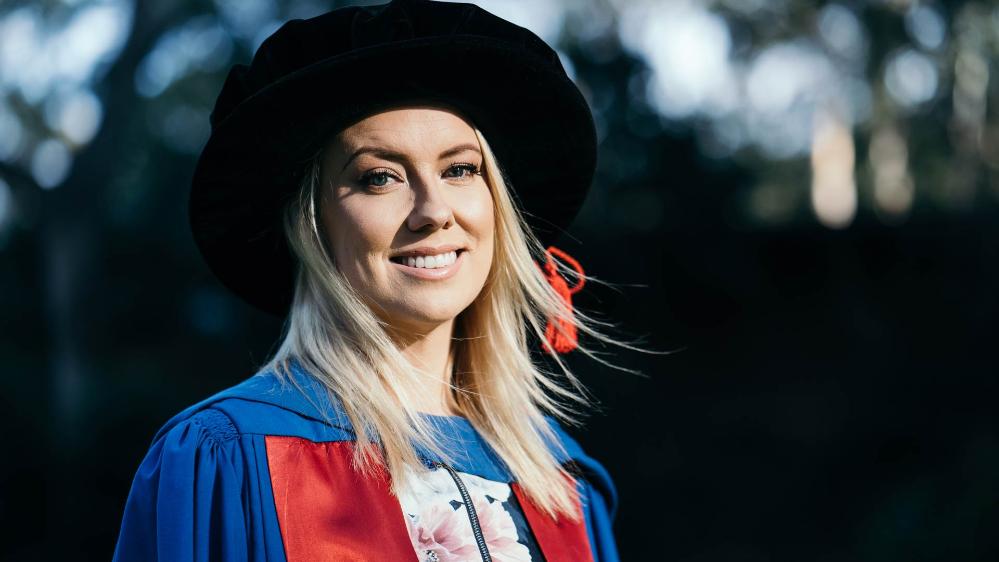 The government could seize their property and business; banks took control of their incomes, investment and assets; they were moved into the highest tax bracket, regardless of their income; and their passports were confiscated, to ensure they could not escape Germany without paying the Reich Flight Tax. All in all, accountants enabled the Nazis to confiscate billions of dollars worth of assets and income.

Weaving the tales of Holocaust survivors with the economic theory, Dr Twyford’s thesis is an engrossing, yet bleak read of the cruelties that humans inflict upon each other. At times, she said, she would break down after a day of reading the archival material.

However, her five-year journey to her PhD – which comes on the back of a Bachelor of Laws and a Bachelor of Accounting (Honours), also from UOW – was not all darkness. The arrival of three children during her studies brought immense light and joy to Dr Twyford’s life, and taught her the delicate juggle that comes with balancing family and university.

Just 36 hours after completing her thesis for her Bachelor of Accounting (Honours), Dr Twyford welcomed her son, Archibald. Just over a year later, she fell pregnant with twin girls, who arrived two months early and spent the early part of their life in hospital.

It was a tough time for the family. Dr Twyford and her husband had three children under two and a half, an exhausting struggle for any parent.

“We are very lucky to have a lot of family support,” Dr Twyford said. “And my husband is incredible. He is really involved, and would chat to me about my PhD. He asked such interesting questions and always wanted to know more about my work.”

Dr Twyford entered the world of academia from a career in finance, with the aim of striking a greater work/life balance. Although originally not drawn to the research side of the role, her PhD has made her fall in love with the process. Now a Lecturer in the School of Accounting, Economics and Finance, Dr Twyford relishes working with students but is also intent on further developing her thesis theory.

“I want to examine how it can be applied in contemporary society, because there are instances of financial and political loss,” she said. “We look back on the Holocaust and we still can’t quite believe it happened, but there are warning sides there for contemporary society, too. If we can engage with the financial side, we can understand how people become dehumanised and how the process to end their actual life occurs.

“Accounting enables us to disguise and reveal information. Accountants were complicit in the Holocaust. They were the ones who were figuring out how much to tax the Jewish people, how to take in their wealth. Otherwise, how would the state have known what to take?

“Accounting formed part of the techniques required to translate Nazi ideology into destruction. They followed the directions of the Nazi state and this decision would ultimately lead to the implication of the accounting profession in some of the worst acts perpetrated against humanity.”