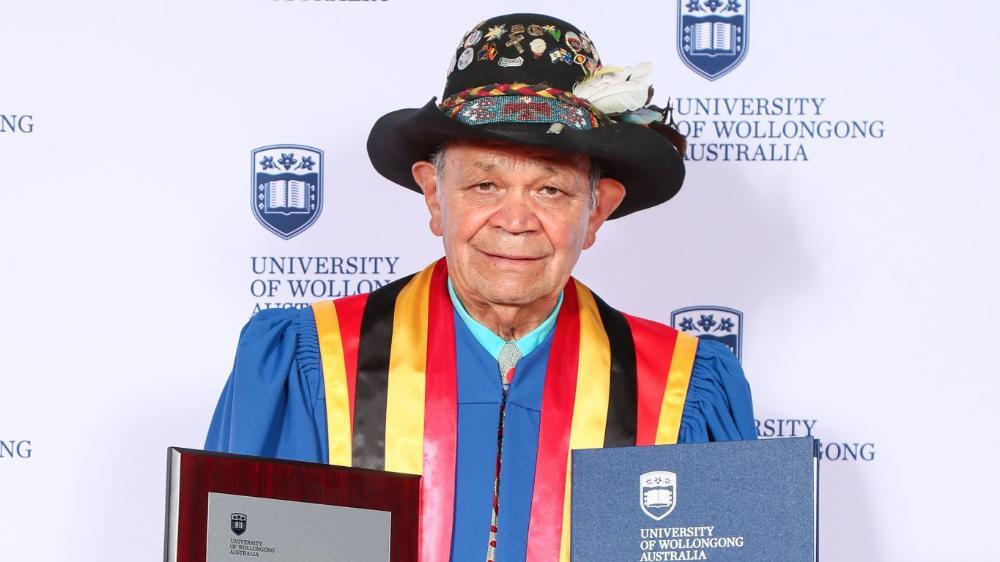 Chancellor, I present to you Oswald Cruse MBE AM.

Pastor Ossie Cruse has dedicated his life to the advancement of Aboriginal people and the survival and sharing of Aboriginal culture and knowledge, uniting generations in intercultural understanding and respect.

Growing up in a time of extreme racism and destruction of Aboriginal culture, Uncle Ossie left school at 11, living what he describes as a hard and rough life until the early 1960s. Finding Christianity and overcoming alcoholism, he turned his focus to providing for his family and improving the lives of his fellow Indigenous Australians.

He embarked on a landmark tour of post-colonial African countries together with former Prime Minister Gough Whitlam and fellow activist Michael Anderson in 1982, garnering support for a treaty for Aboriginal people. He took his message to the United Nations, subsequently advocating on the global stage through his work with the World Council of Indigenous Peoples and the Pacific Asia Council of Indigenous Peoples.

Uncle Ossie is driven to ensure the survival and transference of Aboriginal culture and knowledge through education. His vision enabled the creation of the Monaroo Bobberrer Gudu Cultural Heritage Keeping Place, and earned him an award for lifetime contribution to Aboriginal culture by Museums and Galleries NSW. He also led the revitalisation of the traditional trade language of the South Coast with the local public school, has aided UOW students and staff in their quest for knowledge and contributed to the University’s Jindaola Indigenous perspectives program.

A man of deep faith, compassion and strength, Uncle Ossie is the Pastor of the Aboriginal Evangelical Church in Eden. Here he has guided the development and delivery of a range of community initiatives – among them an Aboriginal youth camp that is the realisation of a lifelong dream.

At 85 years old, Uncle Ossie is the oldest living Aboriginal person on the South Coast and among Australia’s great Aboriginal patriarchs. His service to Aboriginal peoples, and social justice, spiritual welfare, health and land rights in particular, has been acknowledged with numerous awards including an MBE and the Order of Australia.

Chancellor, Pastor Ossie Cruse is an outstanding ambassador for cultural integrity and a passionate supporter of education in our region.

It is a pleasure and a great privilege to present Pastor Ossie Cruse for admission as a Fellow of the University of Wollongong.