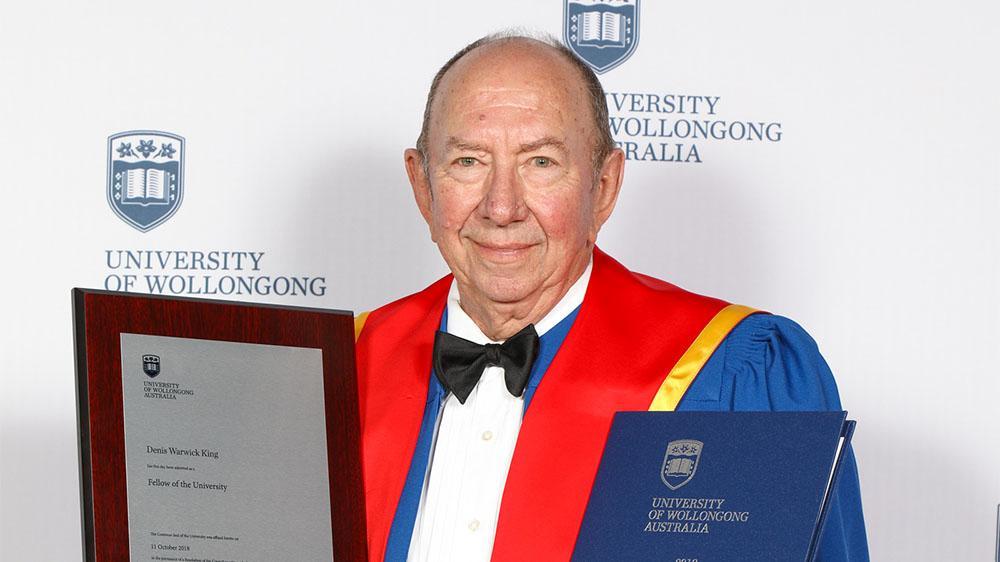 Chancellor, I present to you Denis King.

It is rare to meet, much less have the opportunity to work with, someone of Professor Denis King’s calibre, and the University of Wollongong has been fortunate indeed to have benefitted from his time and talent both as a Clinical Professor with the School of Medicine, and as a member of the University Council.

For more than forty years, Denis has provided extraordinary service to medicine as a leading consultant and specialist surgeon, and his career has seen him practice, teach and consult in Australia and overseas.

Graduating with a Bachelor of Medicine/Bachelor of Surgery from the University of Sydney in 1966, Denis was a member of the first group of medical students to intern at St George Hospital, and in 1969, the first Surgical Registrar to train at St George. He went on to be appointed as its first Director of the Division of Surgery in 1989, and served as the Director of the hospital’s Division of Critical Care and Surgery between 2000 and 2003.

Alongside his heavy clinical load, Denis has been a prodigious contributor to academic research in his field of surgery, publishing 65 original articles in prestigious international journals, including The Lancet. He has delivered 78 presentations at scientific conferences both nationally and internationally, and a further 28 as a special invitee. He has also won four National Health & Medical Research Council grants and supervised doctorate-level students.

Professor King is a Fellow of the Royal Australasian College of Surgeons and has been highly sought-after for his expertise in clinical management and clinical services, serving on many Boards, advisory and taskforce groups over the course of his career, including UOW’s Illawarra Health & Medical Research Institute. Additionally, he was Senior Clinical Advisor to NSW Health (2010 to 2011), Executive Clinical Director, South Eastern Sydney & Illawarra Area Health Service (2006-2009), and Chaired the Surgical Stream of the South East and Illawarra Health Service (2003-2005) and the NSW Health Ministerial Advisory Committee (2011-2015).

Professor King’s exceptional service to medicine, medical education and to professional organisations was recognised in 2010 with the award of a Medal for the Order of Australia. The following year (in 2011), his extensive clinical experience in the Australian public health system saw him appointed as Chair of the Illawarra & Shoalhaven Local Health District Board. In this role, Denis is overseeing the growth of our regional clinical infrastructure, working to deliver better health care, services, outcomes and experiences, including the expansion of Wollongong Hospital. Although healthcare delivery is a complex, team effort, much of the material improvement in our regions’ access to and quality of care has been made possible by Denis’ work.

After such an extraordinary career, one might think Denis would be looking forward to putting his feet up in retirement, but no. Citing his future goals as, “a busy retirement” with “continued involvement with the health system, particularly in the Illawarra and Shoalhaven”, the coming few years look to be just as full as the past 50. Although family is equally as important in Denis’ life and spending time with his wonderful wife, children and most particularly, his 10 grandchildren, is also a high on ‘the list’.

It is a privilege and a pleasure to present Denis King for admission as a Fellow of the University of Wollongong.