US research exchange to expedite development of next-generation condom

What started as detour through an undergraduate degree in science before launching into medicine has landed Dr Simon Cook at the forefront of developing a medical technology that could prevent the spread of sexually transmitted infections (STIs) and unplanned pregnancies in some of the world’s poorest countries.

He has been awarded a prestigious Fulbright Future Scholarship (Postdoctoral) that will enable him to spend four months working with experts at Kinsey Institute for Research in Sex, Gender and Reproduction at Indiana University in the United States.

The Australian-American Fulbright Commission promotes education and cultural exchange between Australia and the United States, with a scholarship program providing support for students and scholars to study and research in either country.

Dr Cook is part of Project Geldom, a joint University of Wollongong and Swinburne University of Technology initiative that is based on the idea that a condom that people want to use could revolutionise the definition of safe sex, with huge impacts on public health programs aimed at curbing the current global rate of 1 million new STIs contracted every day.

The Geldom is based on a material called tough hydrogels. These tissue-like materials act like rubber, the material used for condom production used for over a century but have significant advantages like enhanced feel, self-lubrication, no adverse odours or tastes, can be loaded with drugs and do not cause allergic reactions.

"Of key importance is the user acceptance research. If people don’t want to use it
we won’t have addressed the fundamental issue."

Central to the development of this hydrogel condom is a user-driven design process that has been established to understand the core barriers to regular condom usage and user preferences.

“This technology has the potential to completely revolutionise health service impact while also disrupting the current condom market, which is worth more than $8 billion with 27 billion condoms produced annually.

“But of key importance is the user acceptance research. If people don’t want to use it then we won’t have addressed the fundamental issue. Working with industry leaders in the Kinsey Institute will accelerate the deployment of the condom worldwide.”

Tracing back through his career and education to his role in Project Geldom, Dr Cook said that the path was not straightforward, but based on grabbing opportunities.

“My career so far has been built around collaboration and communication,” Dr Cook said. “As you can imagine, it takes a very multidisciplinary and diverse group of people to develop and deliver an idea like a next-generation condom.

“New places and people make for new opportunities that you might not even realise at the time. Project Geldom has been successful so far because it is a real collaboration between UOW and Swinburne University.

“The whole team, including overall project lead Associate Professor Robert Gorkin, have spent huge amounts of time drawing in experts, advisors, collaborators, stakeholders, industry partners and other researchers to help make this concept become a reality, and we don’t plan on stopping that strategy any time soon.” 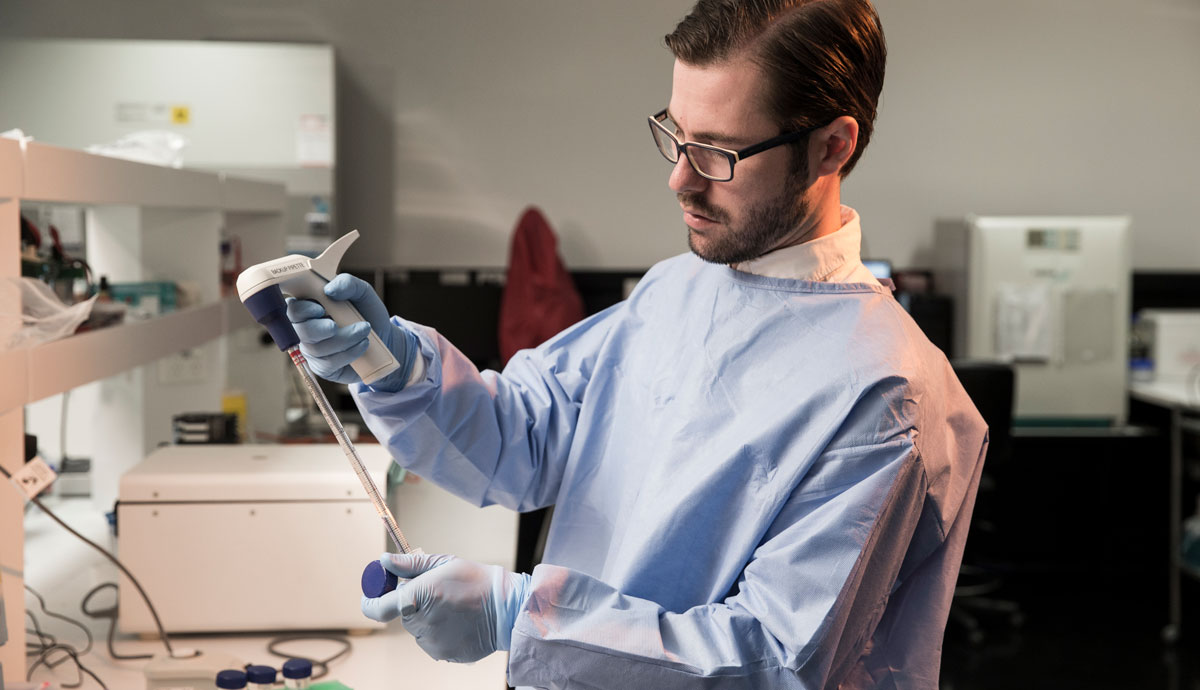 Since he was young he’d wanted to be a doctor or surgeon, but his interest in molecular biology was piqued when he took on an Honours project connected to his Bachelor of Biotechnology undergraduate degree that looked at pathogenesis, or how diseases develop.

“I loved the project I was working on as it had real potential for clinical and social significance,” Dr Cook said. “I was offered a PhD scholarship after my Honours year and because I hadn’t completed the admissions test for graduate medicine I kept going with molecular biology.”

His PhD at UOW involved investigating Group A streptococcal (GAS), the common pathogen that causes sore throats and other infections, and a particular protein called streptokinase.

The work was primarily aimed at understanding the role of streptokinase in disease but also provided valuable insights into how the clot-busting drug of the same name could be improved.

Following graduation in 2014, a new career opportunity kept Dr Cook in the lab, but now funded through a small grant from the Bill & Melinda Gates Foundation (BMGF). The foundation was offering seed funding to come up with a new condom that would help address the spread of STIs and aid family planning in the world’s poorest countries.

The idea gathered momentum, winning support from UOW’s Global Challenges Program and a second, much larger grant from BMGF, allowing it to expand to collaboration with researchers at Swinburne University of Technology, where Dr Cook is also now based.

In a whirlwind four years since its initial funding, the research and development effort has demonstrated that tough hydrogels have the potential to make more sensitive and attractive condoms, are an effective biological barrier to STIs, comply with tough health regulations and can be manufactured to international standards.

"One of the most satisfying parts of this project is that it is research that almost everyone understands,
is interested and has their own opinion on the subject."

Much to the satisfaction of the researchers, novel sensory perception testing using neurofeedback showed people like the feel of the material compared to latex.

“One of the most satisfying parts of this project is that it is research that almost everyone understands, is interested and has their own opinion on the subject as soon as I start talking about it. That is really rare for a research project.

“I continually get a buzz from talking about the project then having people touch the material and always say something like, ‘wow that feels cool’. I get excited by the possibility and it makes the benefit and need for the work very tangible from the get go.”

Looking back on his undergraduate and PhD studies, Dr Cook said one of the best things about UOW was the culture and the positive environment it fostered to learn and develop as an academic.

“The main thing that has been important for my career progression is understanding how essential it is to collaborate and learn from people with expertise and backgrounds that are different to yours.”

Asked what advice he’d pass on to his younger self or other people thinking about careers in science Dr Cook said: “Always wear personal protective devices … On a more philosophical note, always be open to new interesting opportunities that may take you somewhere away from where you thought you were going.

“Taking risks on new ideas helps you avoid being pigeon-holed into something you might lose interest in.”

The Scholars will be officially recognised at the 2019 Fulbright Gala Presentation Dinner, held at Parliament House in Canberra on 28 February 2019.