Researchers at the University of Wollongong have been awarded funding from the European Space Agency to further develop a unique microdosimeter that measures the amount of radiation that astronauts and electronic instruments are exposed to in space.

The $480,000 (€300,000) in funding will be used by UOW’s Centre for Medical Radiation Physics (CMRP) and its development partner, Norwegian microelectronics foundry SINTEF, to design and fabricate a prototype of the radiation detector that can be used on space missions.

The patented silicon-based microdosimeter was invented by CMRP Director Distinguished Professor Anatoly Rozenfeld. CMRP is internationally recognised as a leader in the field of radiation sensors for use in space exploration, medicine, aviation and homeland security.

A multidisciplinary team at CMRP has been working on the microdosimeter for a number of years, in collaboration with international agencies including the National Space Biomedical Research Institute (USA), the United States Naval Academy, the Australian Nuclear Science and Technology Organisation, the Australian National Fabrication Facility at UNSW and SINTEF.

The European Space Agency is interested in the microdosimeter as a means of improving the safety of humans and electronics during space missions. It can act as a personal dosimeter for astronauts, predicting biologically relevant levels of hazardous space radiation, and also as an optimum radiation detector for predicting radiation damage in space microelectronics.

Cosmic radiation is one of the main health hazards associated with space travel and exploration. In humans, overexposure to radiation can cause cancer, damage to the foetuses of pregnant women and genetic defects that can be passed onto future generations. It can also cause damage to microelectronics during long-term space missions and high altitude flights. 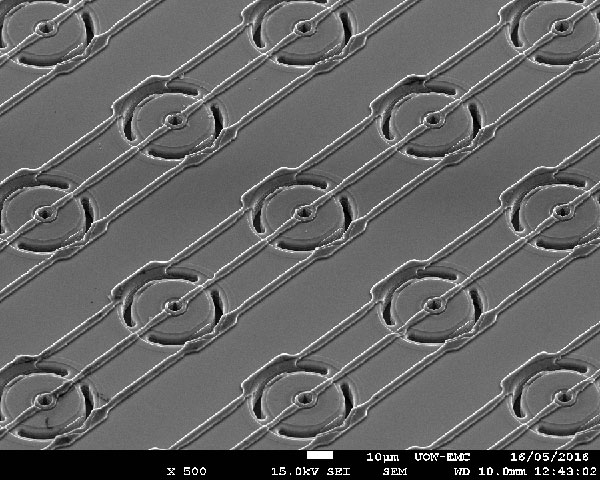 The microdosimeter under the microscope, showing the “mushrooms” - micron-sized cylindrical sensors that mimic biological cells.

Professor Rozenfeld said the space radiation environment is very complicated, consisting of mixed radiation fields of low and highly energetic ions, electrons, gamma photons and neutrons, which made it hard to know how much radiation astronauts and equipment would be exposed to.

“Space weather is not always predictable and can produce harmful effect in electronics and to humans,” Professor Rozenfeld said.

“For example, on a spacecraft, a chance incident where an ion strikes a sensitive node on a microchip can lead to what’s called a Single Event Upset (SEU), which can totally destroy the chip functionality and leave the satellite without communication and navigation.”

“Radiation damage to human cells by a single ion passing through the cell, or in close proximity to cell, is similar to SEU in microelectronics and can damage or kill the cell, which can lead to the formation of cancer.”

The microdosimeters contain an array of sensitive micron-sized cylindrical sensors, nicknamed “mushrooms” by the CMRP team, which mimic biological cells.

CMRP physicist Dr Linh Tran, who contributed to the design and technology of the sensors and is leading the experimental studies of the technology, said the science of microdosimetry was continually advancing.

“We are planning to further develop solid state microdosimetry and nanodosimetry for space application to better understand the biological effects of space radiation and its effects on semiconductor microelectronics,” Dr Tran said.

“Our recent results in a study of low-energy ions utilising a newly fabricated version of ‘mushrooms’ go far beyond what we have previously achieved.”

The European Space Agency will be used by CMRP and SINTEF to: