A tough and durable hydrogel condom that could help prevent unwanted pregnancies and the spread of sexually transmitted diseases across the world has been granted $1 million as part of the NSW Government’s Medical Devices Fund.

Geldom, the brainchild of a team of University of Wollongong researchers led by Associate Professor Robert Gorkin, was announced one of seven recipients of the $9.85 million fund, announced by NSW Health Minister Brad Hazzard last night (Wednesday 8 August) at Parliament House in Sydney.

Two of the successful recipients were based on research that began at UOW.

The hydrogel condom was developed at UOW in 2013, as part of the Global Challenges Program, after the researchers came across an initiative from the Bill and Melinda Gates Foundation to combat unplanned pregnancies and the rise of sexually-transmitted diseases such as HIV in developing countries.

At the time, the team were working with hydrogels, and they set out to discover whether the materials would translate to a condom that users would want to wear.

The hydrogel condom they have spent the past five years creating aims to mimic the feel of skin; the result is a soft, squishy condom that is non-allergenic, for those who are allergic to latex, and blocks viral molecules, bacteria, and sperm.

Associate Professor Robert Gorkin told the Sydney Morning Herald that the researchers are “redefining what a condom could be”.

“There are one million new STIs diagnosed every day, 80 million unplanned pregnancies per year, a $60 billion global burden, and the biggest issue for condoms is feel,” Professor Gorkin said.

“Our product is designed to over the number one issue with condoms because ultimately the choice of using this medical device is up to the consumer.”

The team will use the government grant to launch a human trial by 2018. 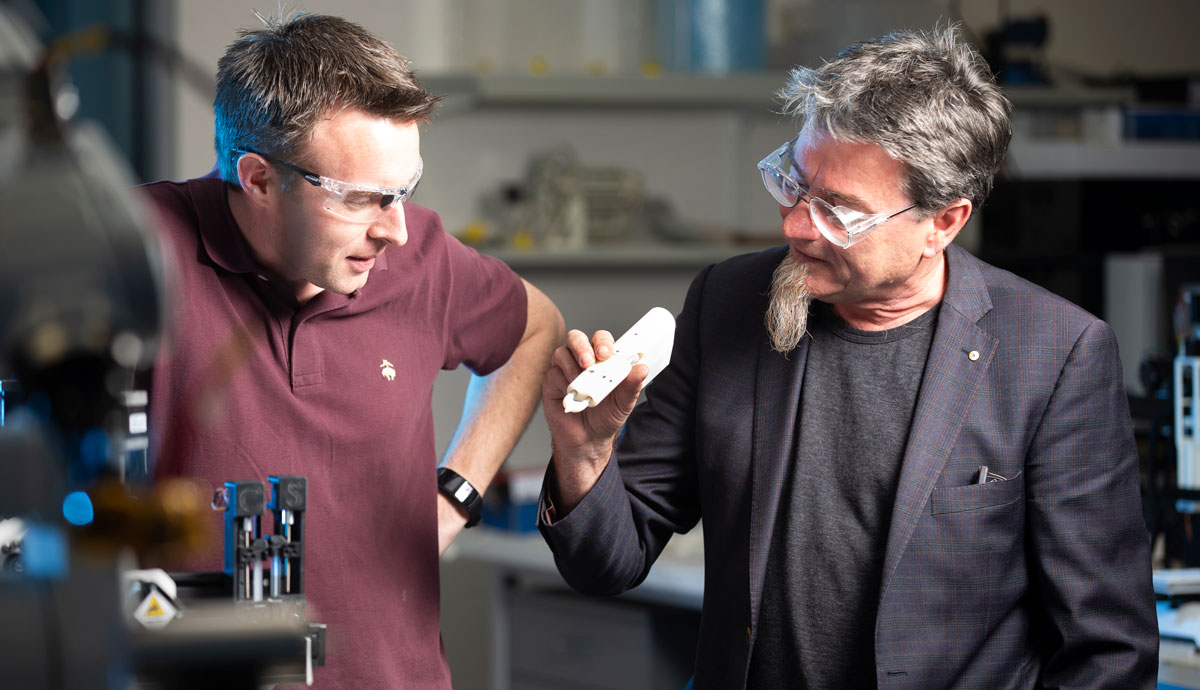 Researchers at the ARC Centre of Excellence for Electromaterials Science at UOW were also successful in last night’s grant announcement, receiving $1.15 million to further develop the iFix system.

Developed in collaboration with the Lions NSW Eye Bank and the University of Sydney’s Corneal Bioengineering Group, the iFix system is a medical treatment technology that incorporates 3D printing to repair corneal ulcerations.

It distributes a 3D-printed structure directly onto the eye, using the iFix Pen developed by ACES researchers. The iFix Pen is a handheld 3D-printing device that delivers a specialised bioink formulation to the eye defect with high accuracy.

The research is poised to transform the treatment of corneal diseases and injuries.

ACES Director Professor Gordon Wallace said the support provided by the NSW Government Medical Devices Fund will facilitate the translation of research over the past year into a commercial product.

“We have partnered with the NSW Lions Eye Bank led by Professor Gerard Sutton and the University of Sydney’s Corneal Bioengineering Group to bring together the variety of skills needed to tackle this challenging area practically and successfully,” Professor Wallace said.

“We believe the advancement of this technology through the Medical Devices Fund will have a significant impact on reducing corneal blindness in Australia and around the world.”

The NSW Government’s Medical Devices Fund is a competitive technology, development and commercialisation program that encourages the development of and investment in new medical devices that will improve our health and wellbeing.