A research team from the University of Wollongong (UOW) and the Australian Nuclear Science and Technology Organisation (ANSTO) has flown more than 10,000 kilometres to collect cosmic radiation.

UOW's Centre for Medical Radiation Physics (CMRP), led by Professor Anatoly Rozenfeld, has for the past 20 years been developing a range of radiation sensors, called microdosimeters, that measure radiation dosage or exposure.

The sensors can be used in a range of settings, from detecting cosmic radiation in space or on aircraft to protect flight crews and equipment, to making cancer treatment safer by ensuring the dosage is adequate and correctly targeted to the tumour.

Antarctica was the destination on the Antarctica Flights and Qantas Boeing 747 flight path because the earth's magnetic poles provide the best opportunity to observe galactic cosmic rays with minimum shielding effects from the atmosphere.

Cosmic rays are part of the same phenomena that, in the right conditions and locations, cause auroras that produce vivid light shows for people close enough to the poles to see them.

However, researchers have discovered that the very same particles hitting the Earth from space could be harnessed to treat previously untreatable cancers with emerging techniques, such as heavy ion therapy.

The advanced CMRP microdosimeters are highly portable and were set up in an area about two-square metres over the wing section of the plane. 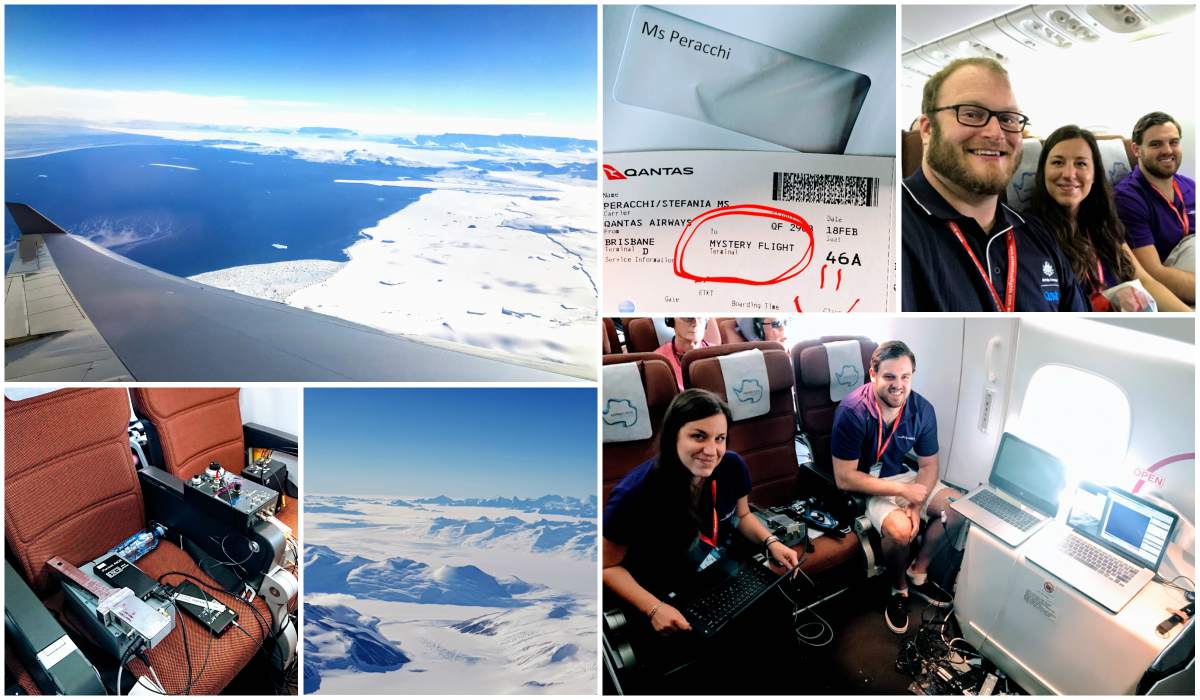 Also tested on the flight was a Timepix detector developed by CERN and supplied by the University of Houston where former CMRP PhD graduate Dr Stuart George and collaborator Professor Larry Pinsky are working on space radiation dosimetry.

"This instrumentation is exactly the same as the devices currently measuring the radiation environment on board the International Space Station for real-time measurements of particles that approach Earth from outer space," Dr Prokopovich said.

"It was an opportune time to be able to collect data in real time as it was the solar minima, when magnetic activity from the sun is at a low.

"This means you get a stronger signal from the galactic cosmic ray particles coming in."

As the plane approaches Antarctica, it drops in altitude from approximately 9,000 metres to 5,000 metres, allowing passengers a closer view of the Earth's southern-most continent.

Dr Prokopovich, who completed a PhD on microdosimetry for space and aviation environments under Professor Rozenfeld at UOW, said the passengers on the charter flight were intrigued to see real-time research being conducted.

The technology developed under Professor Rozenfeld's guidance is capable of operation in a wide variety of radiation fields, from background levels to high-intensity radiation, and has recently been developed to confirm the biologically relevant dose of radiation administered to patients receiving particle therapy treatments for cancer.

The research recently received a grant from the Norwegian Research Council to progress from prototypes to fabrication at the independent Norwegian research and development company SINTEF as a joint commercialisation project.