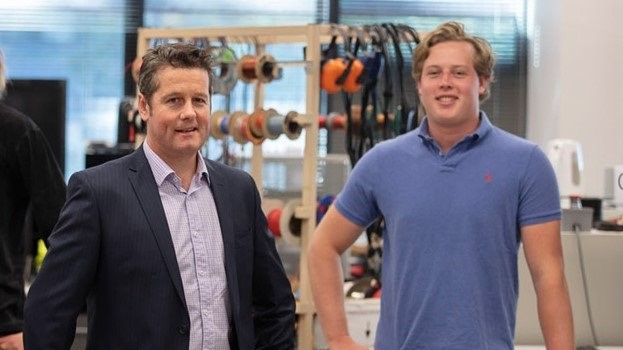 In 1946 a young Bill Tyree started an engineering business in his garage in Sydney. His business quickly grew to become one of the largest electrical manufacturers in the southern hemisphere with several thousand employees.

Sir William died in 2013 but his legacy of giving continues. Today, the Foundation receives most of its donations from the Tyree Group, which donates up to 50 per cent of its trading profits to the Foundation.

Michael Stack, General Manager and Technical Lead at Tyree Group, said that the organisation has a unique structure and is committed to ensuring proceeds for the Tyree Foundation’s charity work.

“Throughout the years, the Foundation has worked alongside the business, but when Sir William died, he entrusted the ownership to a structure that ensures the commitment to the Foundation,” he explained.

In 2018, the Foundation opened the Sir William Tyree Engineering Scholarship at the University of Wollongong (UOW). This Scholarship supports high performing electrical and mechanical engineering students from regional and remote areas with financial assistance of $15,000 per year. Scholarship holders are also given work experience at the Tyree Group.

Michael, who is a UOW graduate (Bachelor of Electrical Engineering), said the Sir William Tyree Engineering Scholarship at UOW gives students real-world and hands on application for what the scholars are studying.

“The scholarship provides exposure to a working business with a practical experience base. It’s giving the scholars exposure to the energy industry and there’s also a financial benefit for students.

“The main reason why the scholarship is for regional and remote students is because we want to give opportunity to students who may not have had the chance or ability to study otherwise.”

Sam Eberle is in his final year of studying a Bachelor of Engineering (Honours) at UOW and in his fourth year of work experience at Tyree Group thanks to receiving the Sir William Tyree Engineering Scholarship in 2018.

Sam grew up in a small town in regional NSW called Stockinbingal. He was born and raised on a three and a half thousand acre cattle and mix crop farm.

Sam said that there was a lot of machinery on his family farm and since it was in a remote area, if machinery broke down, he would need to fix it.

“From a very young age I’ve always been dealing with machinery – fixing it up, manufacturing parts, and doing a bit of mechanic work. Then going through school, I really enjoyed the mathematics and science subjects and did well in them. So, when it came to the end of school and I was trying to figure out what I wanted to do, engineering was the perfect mix between something in the STEM field and dealing with machinery and manufacturing.”

Sam said he looked on the UOW website and found the Sir William Engineering Scholarship. He decided to apply for it because he liked the fact that it had a work experience component.

“I was so lucky to receive this scholarship. It’s a work integrated learning scholarship which means that every year of my degree I do 10 weeks of work experience. It’s been great to go into a professional setting and see how I can apply the theory I’ve been learning in university and what the engineers do in their day-to-day role.

“Putting the practical side on it has been really beneficial. It’s helped me a lot with developing my technical and communication skills. By the end of my fourth year, I’ll have 40 weeks of experience under my belt which puts me ahead of a lot of graduates.

“I’ve also been able to network with professionals in the industry. Tyree gave me a mentor so they could answer any questions about university and offer advice with where to go next. It’s been very valuable.”

Sam said that the financial component of the scholarship has allowed him to focus on his studies.

“The scholarship has meant that I don’t have to worry about trying to put too many hours to another job on the side and because of that, my grades have been high. It pushed me to try and do the best that I possibly can.”

Sam is currently completing his Honours thesis and will be set to graduate from UOW in November 2022.

“I’ve accepted a job for next year, so I’ll be going straight into the workforce. It’s nice to have that security and it has a lot to do with having that experience over other undergraduates and strong results – Tyree have helped me a lot with that.

“Sir William Tyree started a legacy with trying to improve manufacturing in Australia, to get more people in engineering, and getting Australia to produce world leaders so products can be made locally. The support gets people into engineering and makes you strive for your best. It’s a great cause.”