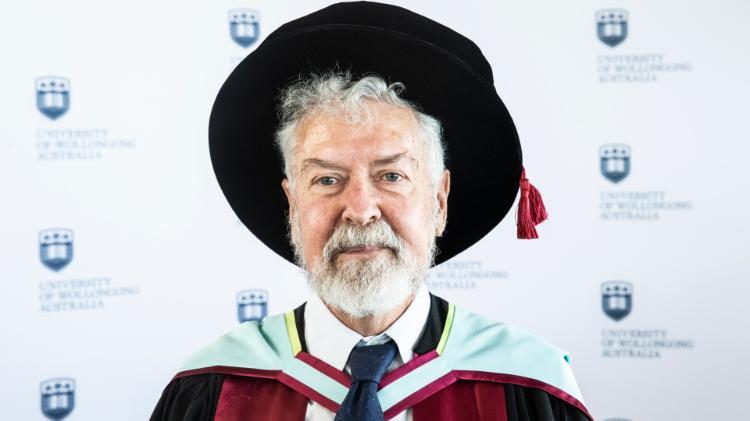 Citation delivered by Professor Colin Picker Executive Dean, Business and Law at the University of Wollongong on the occasion of the admission of Graham Williams as an Emeritus Professor of the University on 8 December 2020.

During his 33 years with the University of Wollongong, Graham Williams provided outstanding intellectual, collegial and professional leadership across multiple disciplines and was among the University’s most esteemed scholars and teachers.

Born and educated in Adelaide, Graham earned his PhD from the University of Adelaide and was awarded a prestigious Rothman’s Fellowship to further his research at the Australian National University. He lectured at ANU and the University of Melbourne before joining UOW in 1985 as a lecturer and research fellow in the Department of Mathematics.

As a researcher in the fields of pure mathematics and computer modelling, Graham garnered international respect and admiration. His published works for journals and conferences are widely cited; two of his most influential series continue to attract higher citation rates now than when first published. Alongside his prolific research activities and keen supervision of emerging researchers lay a deep interest in teaching and governance that was to underpin his significant University-wide impact.

Early in his UOW career, Graham coordinated the large and wide reaching first year mathematics subject before taking on increasingly senior leadership roles. In 1996, he was made Associate Professor and Sub-Dean of the Faculty of Informatics, becoming Associate Dean and then Acting Dean soon thereafter. He served as Acting Head and then Head of the School of Mathematics & Applied Sciences, and variously as Associate Dean, Deputy Dean and Sub-Dean across fields as diverse as informatics, humanities, law, creative arts and business.

In each role, he actively modelled the values and ideals of the University, inspiring those around him to do the same. In long periods as Acting Dean he ably steered the Faculty of Informatics through many challenges, and provided highly effective and collegiate leadership in other faculties including Business, Law, Humanities & the Arts, and Information Sciences.

Among Graham’s most abiding contributions to this University are his service through countless committees, subcommittees and working groups across the University. At faculty level, he served on all committees relevant to his role as Associate Dean and chaired those relating to teaching and education, including leading several curriculum and degree reviews. At University level, he was Deputy Chair of Senate for six years and spent another six as Chair of the Transnational Education and Strategic Alliances Committee. Graham gave his time and expertise on grants panels for the University Internationalisation Committee, Community Engagement Committee, and major education quality and teaching award groups, and was a long-time member of the UOW College Academic Board. These are but a few of his many pan-University influences.

Graham also commendably represented UOW on an array of external committees, including 15 years on the UAC Technical Scaling Committee and three on the Board of Studies Curriculum Review for Mathematics. His continuous commitment to collegiality, logic and effective decision-making has generated profound impact – not only at UOW but throughout the higher education sector and beyond.

In recognition of his contribution and status, Graham was among a select group promoted to Professor in 2010. He maintained this role until his retirement in late 2018.

Deputy Chancellor, Graham Williams has made an enormous contribution to UOW through excellence in research, teaching and governance. His rich gift to the University through more than three decades of outstanding service will surely be continued through this award.

It is a privilege to present Professor Graham Williams to be admitted as an Emeritus Professor of the University of Wollongong.