New Vice-Chancellor on her love of nursing, what drives her, and her ambitions for UOW

Kindness is not a word usually associated with leadership. Nor is empathy nor compassion.

But for Professor Patricia M. Davidson, they are qualities that are at the heart of who she is and how she sees her new role as the University of Wollongong’s (UOW) fifth Vice-Chancellor.

A few weeks into the position, Professor Davidson has immersed herself in the world of UOW and is relishing every moment. Much of her calendar has revealed the priorities she has brought to the job, and hopes to enact in the months and years to come.

Professor Davidson has attended several Reconciliation Week events, advocated for the Illawarra region during the taping of ABC’s Q+A in Wollongong, and met with academic and professional staff across campus. It is evident that equity, diversity, and social justice will provide the foundation of her approach, as will ensuring that staff and students feel connected to the University’s greater mission. 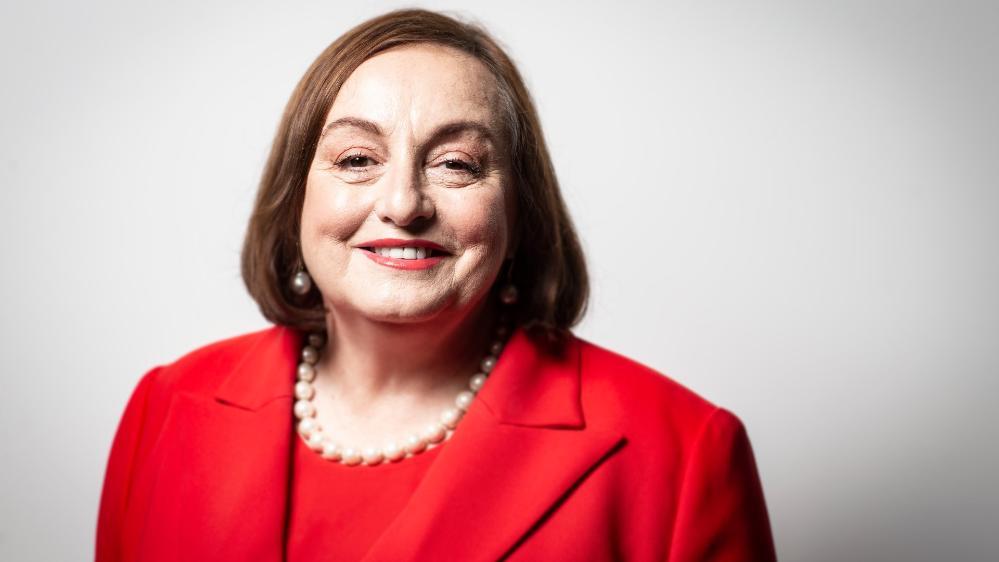 “Kindness is hugely underrated,” Professor Davidson says, during a rare quiet moment in her office. “Approachability and accessibility, too. I believe that if you have the discretion to help someone else, you should always use it.

“I believe in just being kind. It doesn’t mean I will always get it right, and that I don’t have those same emotions that everyone else has. But if you can help a student or a staff member by showing some compassion and understanding of circumstances, you’re always going to be better off.”

Professor Davidson has long been considered a leader in her field. She came to UOW from Johns Hopkins University in the north-eastern US city of Baltimore, where she spent eight years as the Dean of the School of Nursing. Before that, however, Professor Davidson was Professional Chairs in Cardiovascular and Chronic Care at Curtin University and the University of Technology, Sydney, and Professor of Cardiovascular Nursing Research at Sydney’s St Vincent’s Hospital.

Her global positions are equally impressive and impactful; currently, she is Co-Secretary General of the World Health Organisation Collaborating Centres for Nursing and Midwifery and Counsel General of the International Council on Women’s Health Issues.

But Professor Davidson says that, above all, she is a nurse. It is in the hospital that her training began and, many years later, that desire to help others and that passion for medicine has never left. 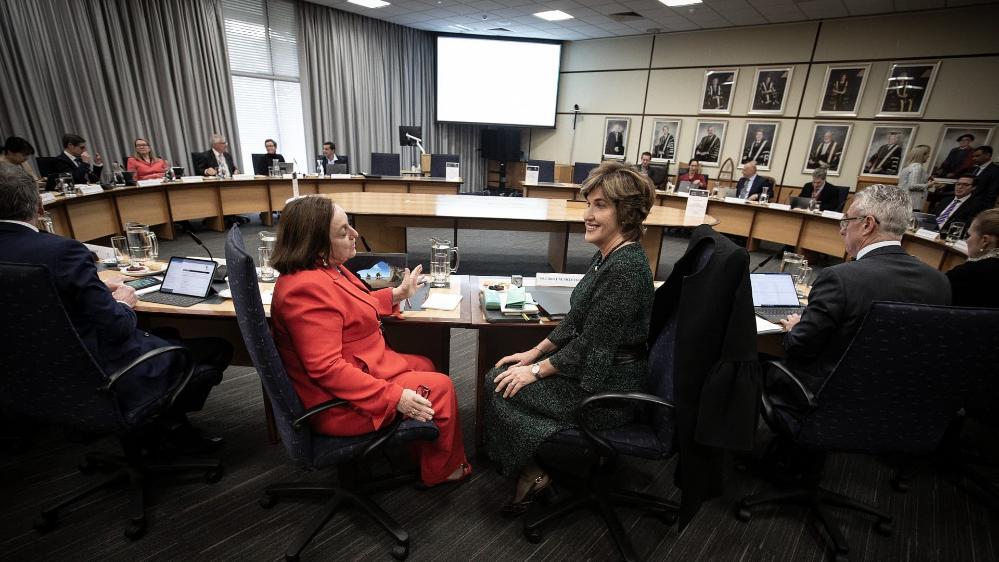 Professor Davidson with UOW Chancellor Christine McLoughlin AM FAICD during the Vice-Chancellor's first meeting of the UOW Council.

But it was a career that had its roots in wretched circumstances: the loss of her mother as a teenager.

“I was in Year 12, in sixth form as they called it then, when my mother died,” says Professor Davidson, who grew up in Canberra. “I think it was watching the nurses in the hospital and what they do that inspired me. I went to ANU [Australian National University in Canberra] for a year but I dropped out. No-one in my family was doing well at the time, after my mother died.

“They were different times, it’s not like now when we have palliative care. What was planted in my mind was the importance of the nurses. I was waitressing but soon realised that wasn’t my life’s calling.”

One of Professor Davidson’s colleagues had decided to become a nurse, so she decided she would also give it a try. She relocated to Wollongong and began her clinical training at Wollongong Hospital.

“From the very first day, I loved it,” she says. “And I still love it.

“Nursing is about connecting with people, about doing meaningful work. It is that combination of art and science that I love. You need to have a good grasp for the science, but it has that human aspect that I love. It’s about connectivity between people.”

Professor Davidson was a qualified nurse when she arrived at the University of Wollongong to study a Bachelor of Arts in the 1980s, followed by a Master of Education, which enabled her to communicate the science, policy, and ideas that she had gained from her first degree. She is the first UOW alumna to become Vice-Chancellor. Professor Davidson takes part in a smoking ceremony at Woolyungah Indigenous Centre to welcome her to UOW.

She loved the University at the time, but the idea that she would one day return as Vice-Chancellor would have been mind-boggling to the young nurse.

“I never would have imagined that I would end up back here. At the time, I was a young person who was finding her feet. The one thing I really remember about that time was that the people and teachers at UOW were incredibly kind, generous and caring. As a teacher, it is about sliding doors. Throwing a lifeline to someone and being supportive of their dreams can be life-changing.

“What I also learnt during my time here was the importance of the social determinants of health. Education, gender, status and power, how they all contribute to our health and wellbeing.”

That thread of social justice, of looking at the whole picture of who we are and how that influences our health and our trajectory, has been ingrained in Professor Davidson’s career from the very beginning.

She is passionate about and committed to the needs of women, the disadvantaged and marginalised, and culturally diverse communities.

Professor Davidson is the first female Vice-Chancellor of UOW, a fact that should not be ground-breaking in 2021, but it is.

“It should be the norm, but it’s not. It is about showing people that you can do it,” she says. “In the NSW Vice-Chancellors Committee, there are only two women. I love that quote from Michelle Obama, ‘no-one told me I could do it.’ And I really hope that I can be a role model, that I can tell women they can do it. I was at a Reconciliation Week event the other day and I said to one of the academics, ‘maybe you’ll be our next Vice-Chancellor’, and she looked at me in shock. I don’t think anyone ever tells women that they can do it.

“I think women have much greater career longevity. When I got this job, the Dean of the School of Medicine at Johns Hopkins said ‘why are you doing it?’ I’m 64 and he thought I had rocks in my head to be taking on this role at that age. But I think I have a lot more left in my career.” 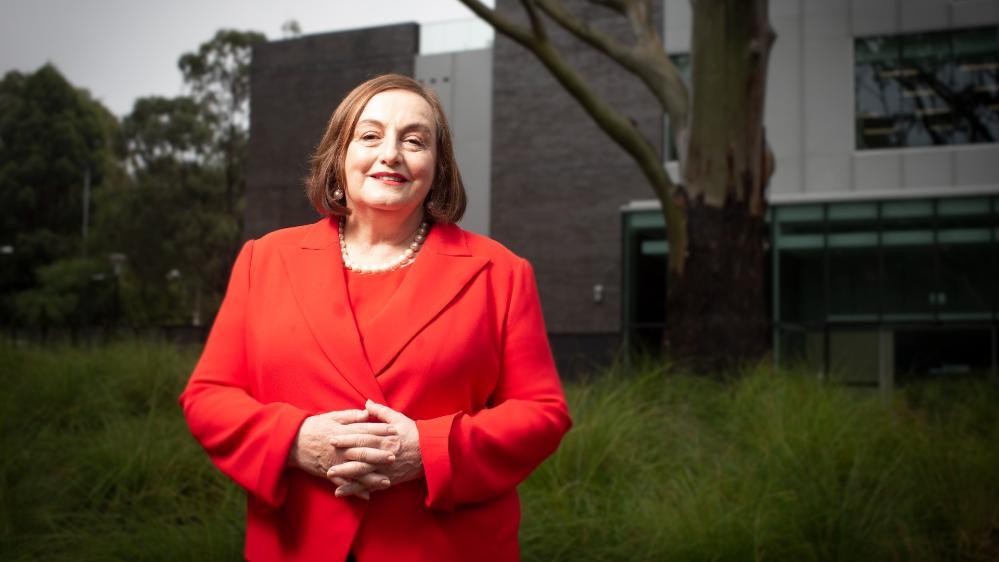 Professor Davidson, a mother of two, says that balancing parenting responsibilities and her career has been demanding at times. However, she is a firm believer that women can have it all, just not at the same time.

“When I look back on my career, there were moments when I was much too hard on myself. I think women need to be in the moment, whatever that moment is. I believe things come, but at a different pace from what is expected.

“I am often reluctant to say it, because people think you are valuing it above all else, but I believe motherhood and parenting is the hardest and the most rewarding job in the world. We should really value those years because everything else will come again.”

Professor Davidson says her own career and her priorities shifted as her two children grew up. It was only once they had left the home that she was able to focus on one of her long-term goals: working overseas.

“Like most women, I didn’t have a linear trajectory in my career. I have two amazing children, but for a lot of my career, working overseas was not an option. But it was always something I wanted to do. Then one day I got a call from a head-hunter at Johns Hopkins. I asked my husband what he thought, and he said ‘you don’t want to die wondering’.

“I wouldn’t have gone anywhere but there was a lot about Johns Hopkins that appealed to me. It is embedded in the community, had a strong social justice angle, and it was focused on excellence without elitism.” 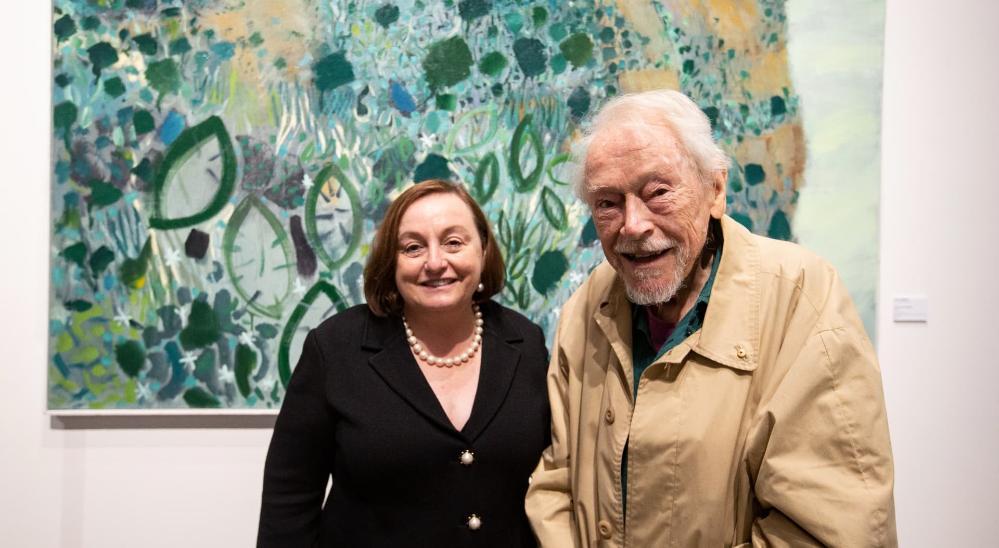 Professor Davidson with artist Guy Warren at the launch of the Hills and Wings exhibition at UOW.

When it comes to lifting women up in academia, Professor Davidson says one of her priorities is to boost the number of women in senior research and leadership positions. But she is also focused on professional staff, and ensuring that women feel they can pursue both parenting and leadership roles, without having to compromise one for the other.

Her focus on gender is part of her overall desire to further cement UOW’s agenda of diversity, equity, and inclusion.

“I am hoping to address and increase the ranks of women in our senior and distinguished professors, and I am passionate about working towards an agenda of diversity, equity and inclusion,” Professor Davidson says. “I want to ensure everyone feels valued on campus. Part of this, which has been amplified with COVID, is how international students have been treated as commodities. My focus is, how do we make people feel valued, no matter what background they are from?

“One of the things that I think is so important about UOW is the power of education to transform people’s lives. For every student going through here, their life is going to better and richer because of their education, and we have all contributed to that.

“Levels of education are directly related to the gross domestic product, particularly for women and First Nations people and minorities, so it is critically important that we get that right. UOW also has many first in family students, and education is life-changing for these students. They are going to have a better life because of it.”

While Professor Davidson is relishing the challenge of her new role, she is also enjoying being back in Wollongong for the first time in a decade. Like many, she was inspired by COVID to make the move back to Australia, but there was one other factor that was calling her home: her young granddaughter.

“The pull of family and the pull of home was big. Before COVID, you knew that you could be home in about 24 hours if you needed to, but now, if someone gets sick or something happens, you might not get home in time,” Professor Davidson says.

“I have two children and they’re both back here, but I also became a grandmother. I have a granddaughter who is 18 months, and everything about being a grandparent is amazing.” 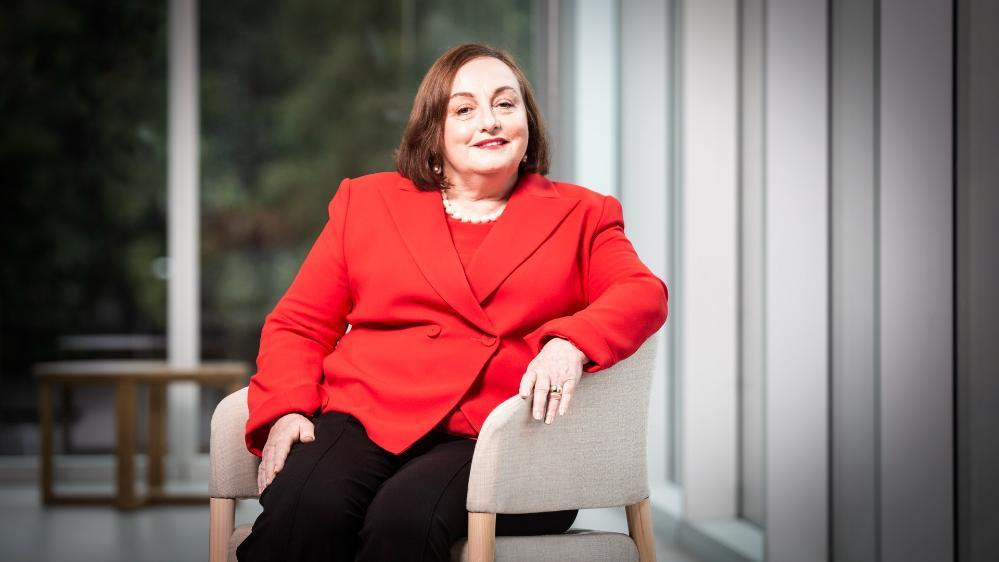 COVID placed her on the frontline of the pandemic, and she spent part of the last year voluntarily giving vaccinations in Baltimore alongside her colleagues. It has made her even more grateful to be a nurse and for Australia’s robust healthcare systems.

So, with the post-pandemic period representing a tremendous challenge and opportunity for universities, what type of leader does Professor Davidson hope to be?

“Good leaders try and meet people where they are at. I don’t believe in a top-down approach. The most effective leaders are the leaders who want to be with people and surround themselves with people who are smarter than they are.

“I really believe in servant leadership. It is not about me, it’s about UOW, the people who study and work here, and the community. UOW has done so well but it has a lot more potential.

“I know people are critical about rankings. In the US, I had the honour and privilege of leading the number one school, but it’s not just about being number one. It’s about what you do what with that. The more successful we are at UOW, the better funding and interest we will attract, and the communities that we are embedded in will become richer and stronger.”