How the Women's Weekly changed our food culture

From birthday cakes to mock chicken

The Australian Women's Weekly changed the way we eat, the recipes we cook, and the food we love.

One of Lauren Samuelsson's earliest, and fondest, memories of food is of eating tongue sandwiches at her grandmother's kitchen table. I can't help but screw my face up in disgust, as the University of Wollongong (UOW) PhD student recalls peering into the boiling pot and seeing, well, "a big, old tongue". She laughs at my horrified expression and points out that "it actually tastes okay. You just have to peel the taste buds off before you eat it."

Perhaps it was this childhood exposure to the curiosities of cooking that led to Lauren's lifelong fascination with food and the cultural context in which it is consumed. Maybe it was the other staple on her grandmother's kitchen table - the stack of Australian Women's Weekly magazines, which Lauren spent many happy hours poring over.

When Lauren was searching for a PhD topic, it made perfect sense to explore her love of food, and the way Australians eat it, through the pages of The Weekly. Her thesis - A Matter of Taste: the Australian Women's Weekly and the birth of a modern Australian food culture, 1933 to 1982 - explores the cultural links between our Australian heritage, how we eat and why. 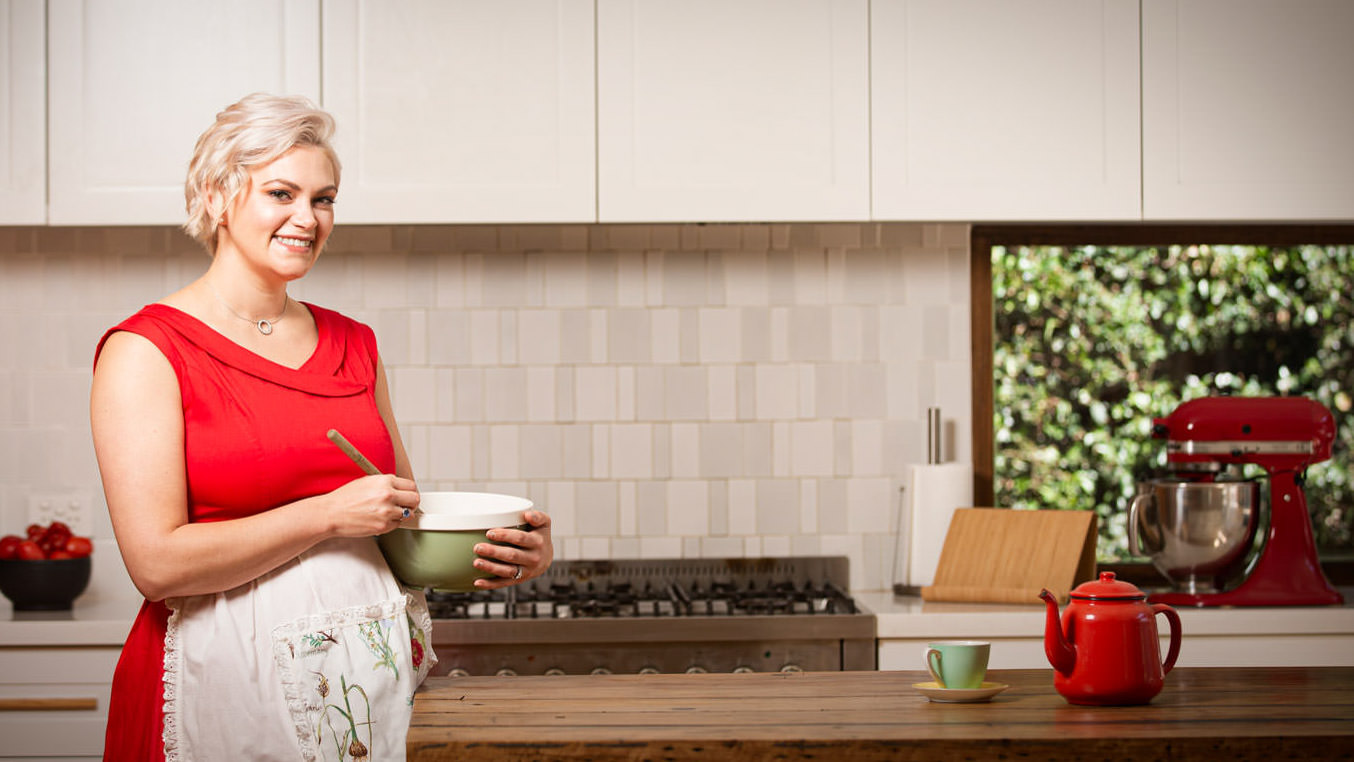 The Weekly is still Australia's most widely read women's magazine, a position it has held since its inception in 1933. During the 1950s and '60s it had the highest circulation (per capita) of any women's magazine in the world, says Lauren. If a recipe was featured in The Weekly, it was guaranteed it would appear on myriad dinner tables across the nation that week.

Lauren proves the timeless popularity of The Weekly when she mentions the Children's Birthday Cake Book. Almost everyone born in the 1970s and '80s has happy childhood memories of a cake baked from this now iconic book.

"The swimming pool was a favourite, filled with jelly and drowning in lollies," grins Lauren, her smile wide with childhood nostalgia. "In the 1950s they had birthday cakes for kids but they were fruit cakes, they had to be out of necessity. Back then there was little refrigeration and fruit cakes had a longer shelf life." 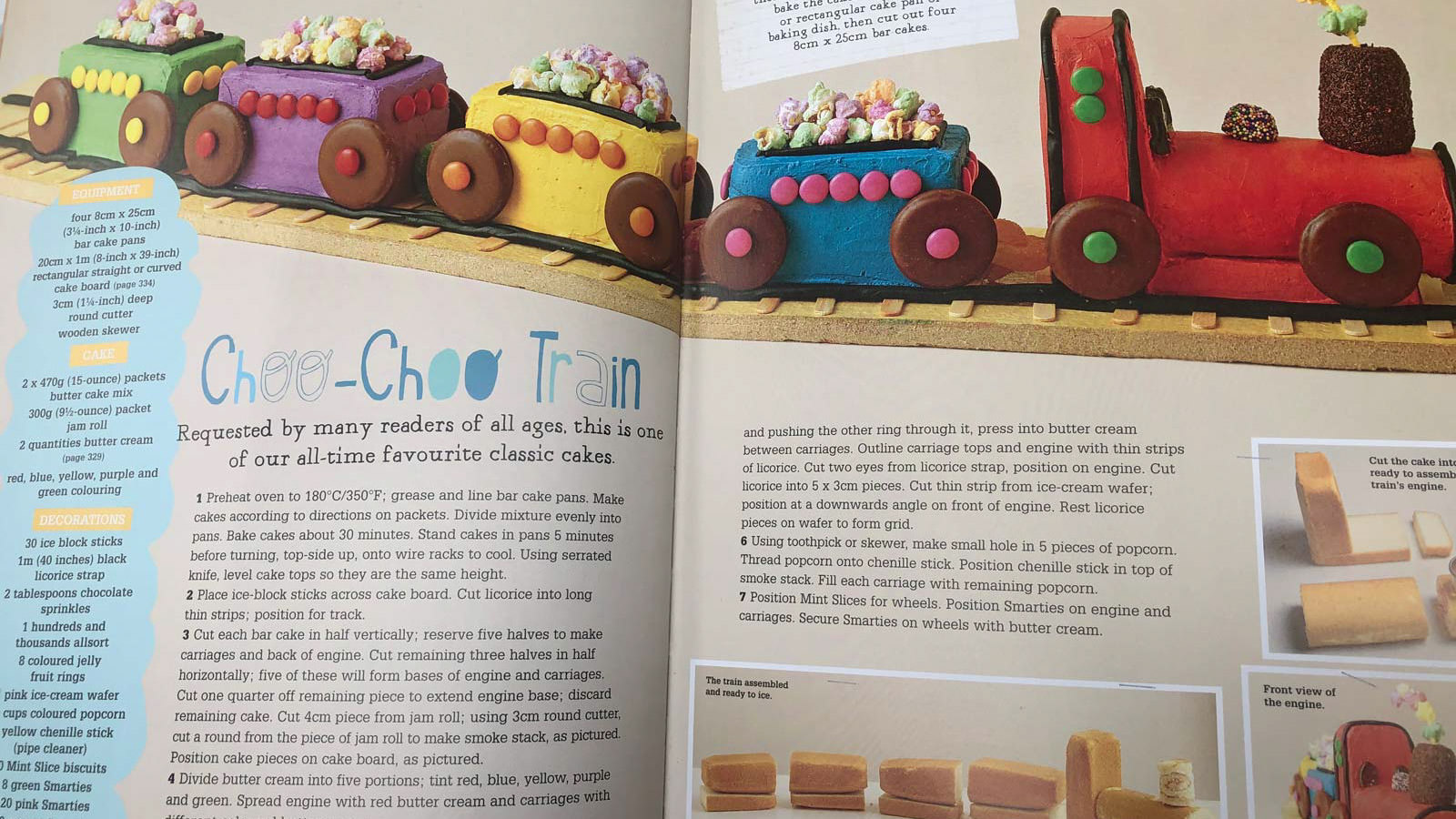 The Choo-Choo Train, one of the original designs from the iconic birthday cake cook book.

But once fridges became household norms more elaborate cakes started to emerge, such as the now ubiquitous layer cake. "The layer cake, an American import linked with over-the-top glamour, and the wedding cake, which people would make themselves during the period I was researching, were among the most popular cakes featured in The Weekly," says Lauren.

"Despite the elaborate nature of the cakes, back then they were purely about celebration. Now, cakes are a status symbol, driven by social media. They have to be Instagrammable, and are about performative parenting. 'Look at this amazing layered rainbow cake, when you cut it open all the lollies burst out. How good a parent am I? I spent 12 hours making this'."

Lauren believes there has now been a cultural shift back to simpler cakes, like the ones featured in The Weekly in the '80s and earlier, where packet mix was encouraged, you didn't require a chemistry degree and no-one cared if the finished product didn't replicate the picture.

It is these cultural trends and shifts that Lauren explores in her thesis, giving us a snapshot in time of society, through the lens of the family dinner table. Besides the fact we have a sweet tooth, what else does The Weekly tell us about the way we eat and why?

A scarcity of food

Meat was a household staple on Australian dinner tables from the 1930s to the 1950s. Even during times of austerity women found a way to serve it by creating mock recipes and "transforming low-cost, unrationed ingredients from the mundane to the novel". Of all the mock recipes invented - mock duck, mock oysters, mock champagne - by far the most popular was mock chicken.

"In the 1930s, chicken was considered fine dining," says Lauren. "People had them in the backyard but you'd want the eggs more than the meat, so people had to be creative with their cooking."

In the 1946 February issue of The Weekly Miss M Bell from South Australia won the recipe competition for her Savory Mock Chicken Pie, substituting tripe for chicken. This was something of a cultural revelation, says Lauren, because Australians generally associated eating offal with poverty.

"But Miss Bell, simply by calling the recipe by a more creative name made it palatable to The Weekly's middle-class readers, winning one pound for her ingenuity." Perhaps Miss Bell was the 1940s equivalent of an Instagram influencer, convincing readers that tripe really wasn't that bad if you called it chicken. 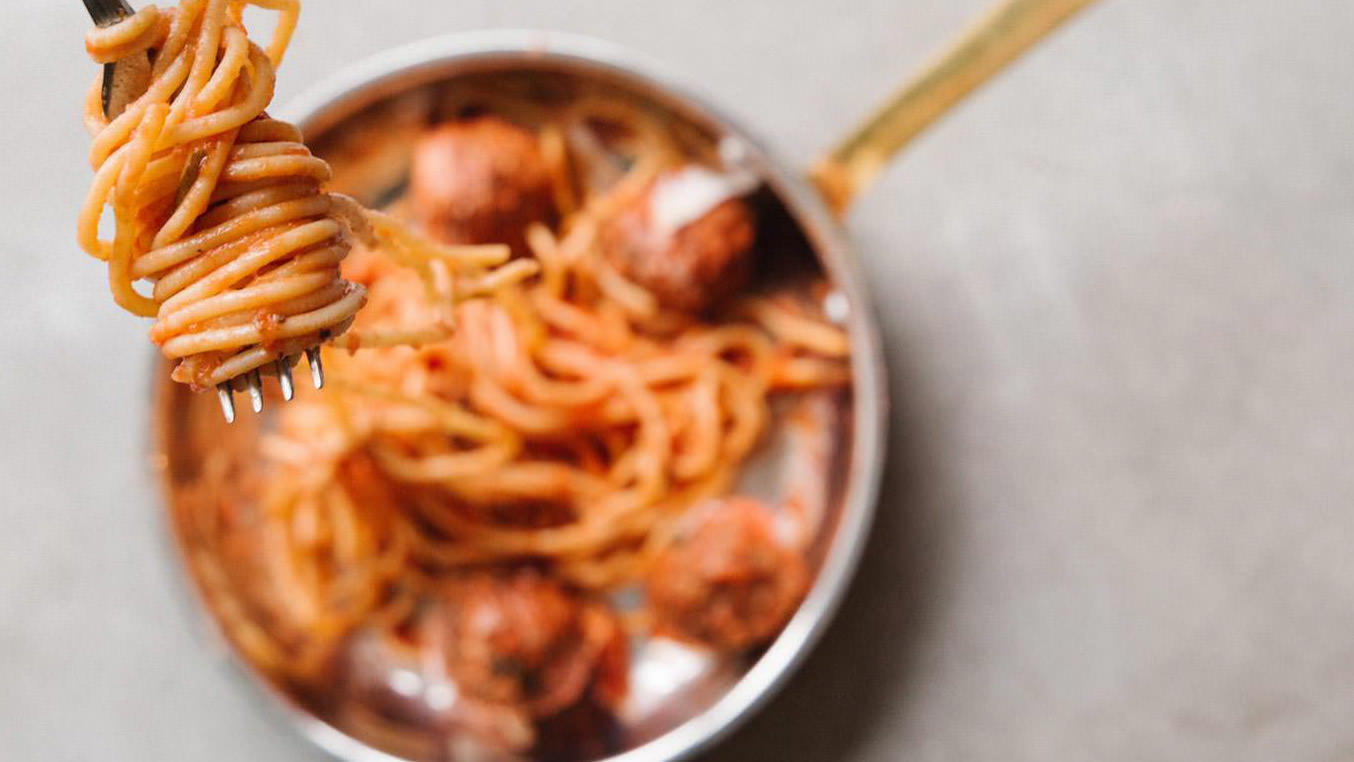 A modern version of spaghetti bolognese, which originally appeared in the pages of the Australian Women's Weekly in 1952. Photo: Unsplash

But by the 1970s mock chicken recipes were non-existent in the pages of The Weekly, real chicken had become cheap and plentiful due to mass farming practices and is still the most popular meat eaten today. Culturally, the thing mock foods tell us, is that in times of necessity Australian women were "creative, innovative and willing to improvise to create quality family meals with limited ingredients".

"These are all key elements of our modern Australian food culture," says Lauren. "Despite lots of people writing off early Australian food culture as being boring or terrible, women were doing their best to create delicious, nutritious, adventurous meals with the limited ingredients they had, and The Weekly encouraged and celebrated this."

Despite women doing the heavy lifting in the kitchen it was meat-loving men who dictated what we ate.

The influence of men

"Women were cooking for men, to men's tastes, and that comes through a lot in The Weekly where meals were meat-heavy," says Lauren.

"Articles would encourage women to 'cook this for your husband, he will enjoy it'. There was no mention of what women might enjoy. Women would often write in to The Weekly saying they really wanted to try Chinese cooking but they have to serve up meat and three veg.

On the rare occasion men were featured cooking in The Weekly, they were generally professional chefs barbecuing or cooking for elaborate dinner parties. When men cooked, it wasn't the domestic drudgery of a family meal. It was the rockstar stuff, the status cooking that featured exotic, experimental and often expensive ingredients. 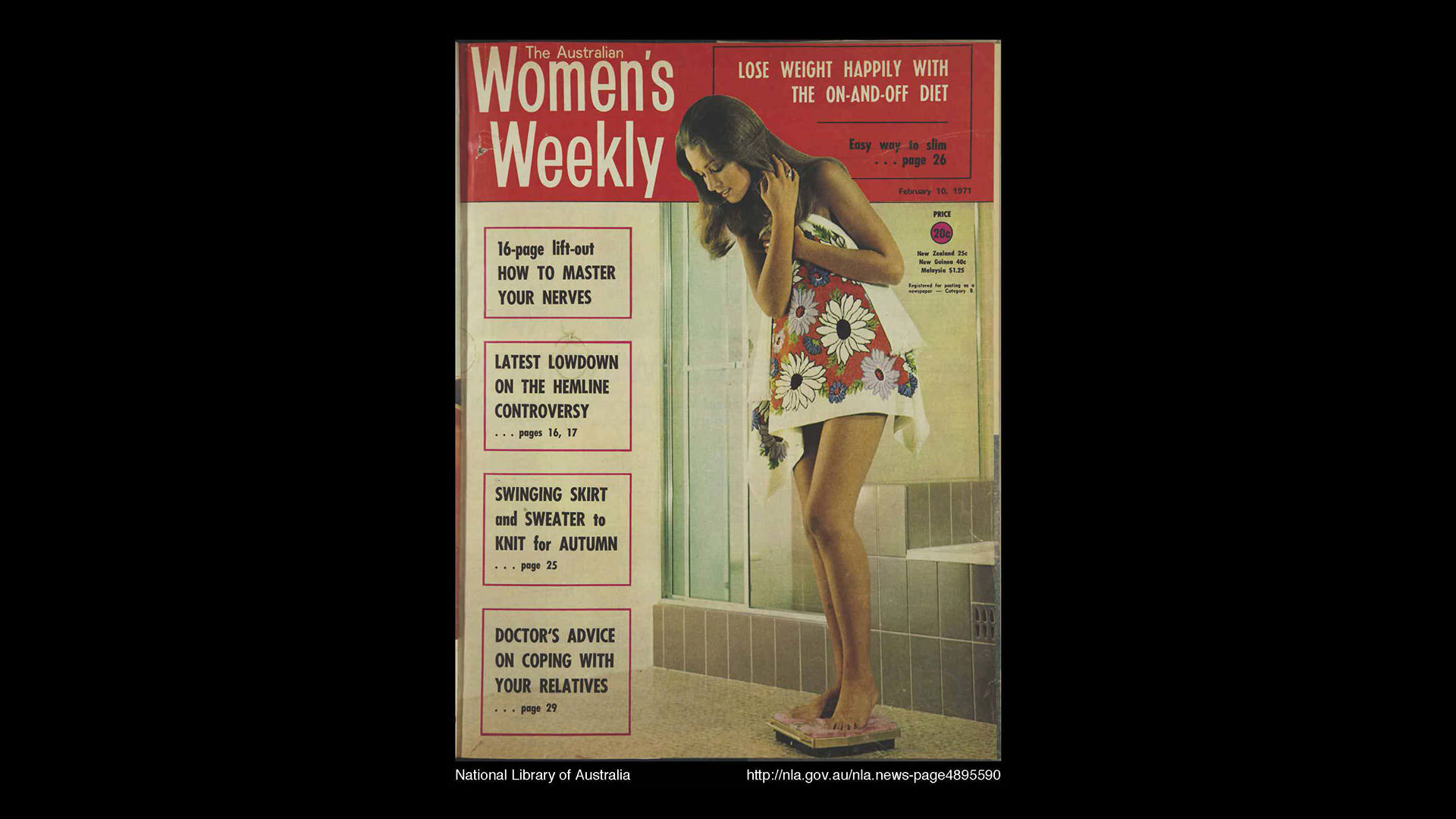 A cover of the Australian Women's Weekly from 1971 showing a woman weighing herself. Photo: National Library of Australia

The birth of diet culture

"I have to imagine that a lot of The Weekly diets were for entertainment purposes," laughs Lauren when I ask this question. "A lot of them were crash diets, that recommended eating nothing but apples for three days. There was a Vogue diet in the 1970s that suggested eating nothing and drinking only a bottle of wine and coffee each day. That one was never reprinted."

What The Weekly tells us about this time is that women cooked out of necessity - to feed their family and friends; men cooked for status - to impress their peers.

And sometimes women cooked but didn't eat at all.

But crash and fad diets didn't really become "a thing" in The Weekly until the 1960s, when wealth, status and fashion became part of the cultural norm.

"There were a few diets in the pages of The Weekly in the '30s, none in the '40s - people were struggling to get enough food - but things really picked up in the late '50s, and early '60s when people were finally more affluent," says Lauren.

"They could afford food and weight gain started to become a problem, a lot more processed food was available, we were driving more because we had cars. Fashion promoted the teensy, tiny waist. And Twiggy came to town."

She recalls an issue of The Weekly featuring Twiggy's engagement on the cover. "Pure celebrity gossip," says Lauren. "But emblazoned across the bottom is a 16-page dieting feature. So there's obviously implicit links there saying The Weekly diet can make you look like Twiggy."

And when Weight Watchers started in Australia in the 1970s diet culture snowballed. "Weight Watchers would advertise in The Weekly and do 16-page supplements, recommending diets and meal plans, showing before and after weight loss shots, with articles from male doctors telling women how to lose weight," says Lauren.

"Many diets were published in September so you could have your summer bod, and we still see that now. The only real difference is that diets are framed as wellness, that's the new buzzword. And instead of cutting out all food and just drinking wine, there is a push to cut out food groups such as carbs."

On the topic of carbs, is the lamington the one food we can quintessentially call Australian? 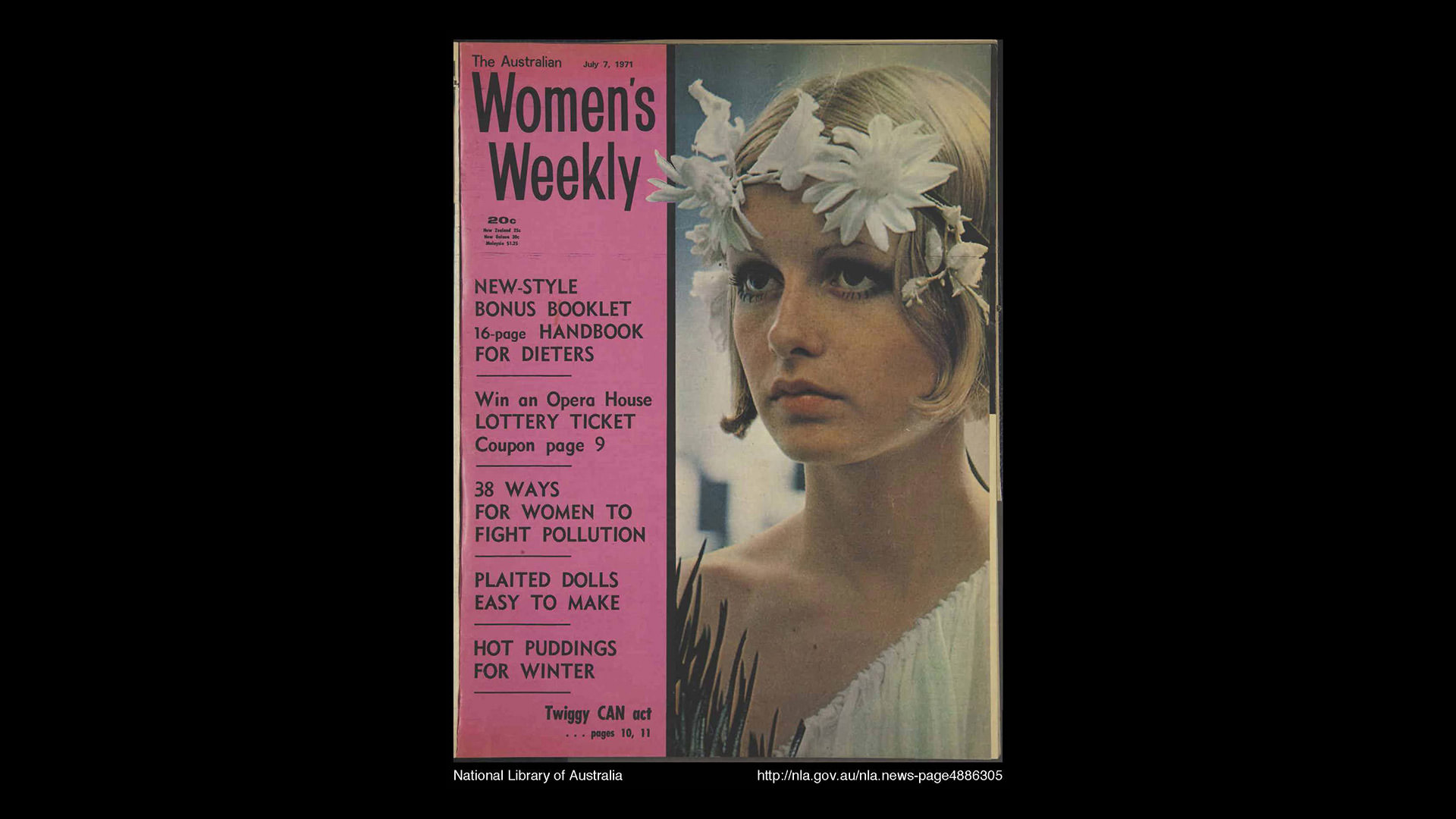 "Australian food is defined by its eclecticism," says Lauren. "There is no real food that we can definitively say is Australian, except maybe the lamington. Definitely not the pav, New Zealand has us beat there. Perhaps roast lamb. Mutton and lamb were really popular because we had a big wool industry and the meat was secondary, so we would roast it."

Native foods such as kangaroo were rarely on the menu, except when boiled over a billy and turned into stew. Lauren points out that Australians have only recently embraced native foods and ingredients.

Thankfully we have seen a big shift in this type of thinking, both socially and gastronomically, and Aboriginal culture is now celebrated and embraced.

How has our food culture evolved and changed?

"One of the most important things that comes out of my research is that The Weekly gave women a voice and space to share their stories," says Lauren.

"It shows that women were essential to the development of food culture in Australia, basically the choices that they made became iconic meals. Take spaghetti bolognaise for example. Australian women made this a household staple. I cook it, you cook it and even though it bears no resemblance to anything Italian, we made it our own - a meat-heavy spag bol!

"Sometimes there were recipes in The Weekly that were a bit adventurous if you wanted to go there. But the majority of the recipes were about cooking for the average person, which tells us more about food than trends in fancy restaurants, because these were the things people were eating everyday, unless you were on one of those crazy diets," she laughs. 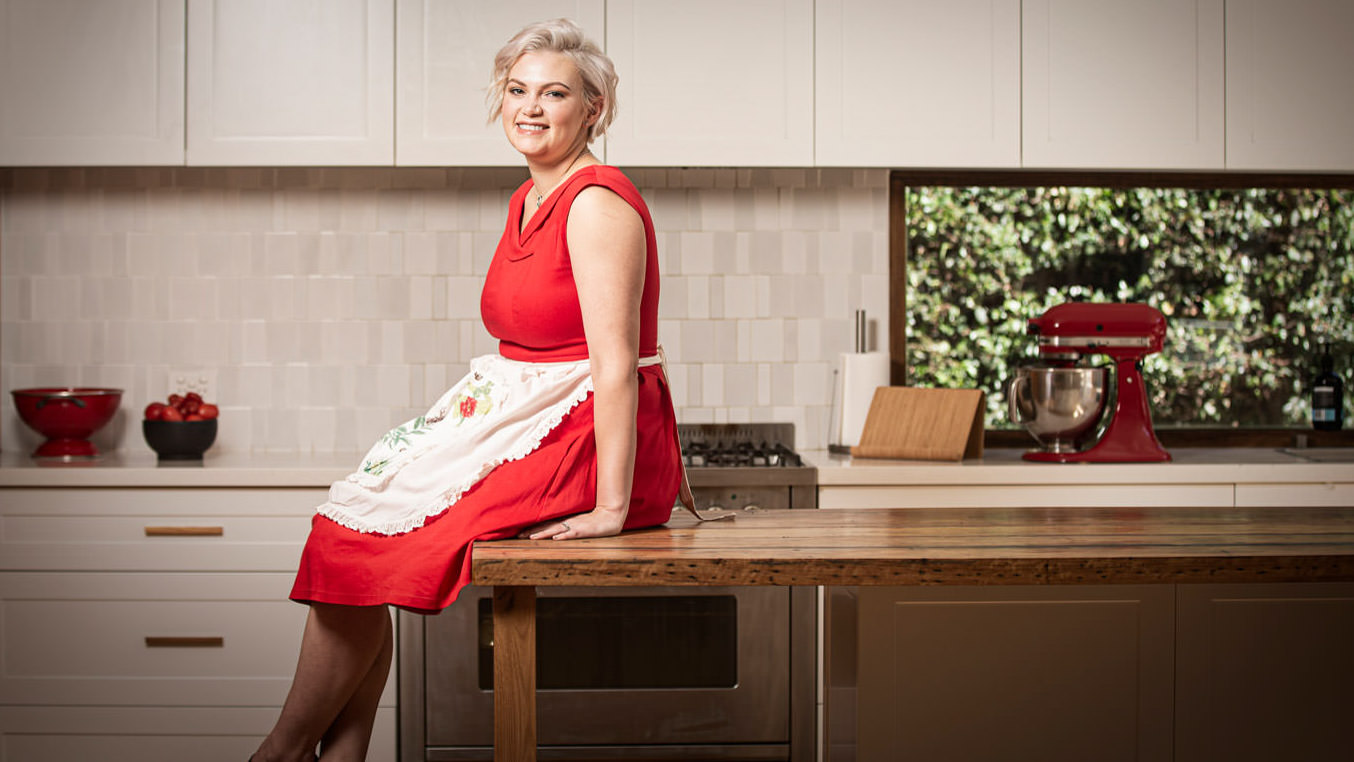 Lauren hopes to turn her research into a book that is accessible to people beyond academia "because food resonates with everyone. It is such a large part of our celebrations, we have a lot of memories of food and being able to tap into or trigger those memories is such a valuable thing".

"I want people to start thinking about why they ate the things they ate, and to know that there is a cultural reason behind it," she says. "It wasn't just because Mum cooked it, it's also about understanding what Mum's limitations were, where she was getting ideas from, what produce was available. It's all linked to a snapshot in time of our national food culture."