Did you know a plastic recycling initiative is emerging on campus? And it’s about to gain momentum

Ethical dilemmas are likely to arise in the workplace from time-to-time, no matter what job you do. If, for instance, your workplace doesn’t have a recycling system in place, it is easy to blame the company when you find yourself throwing recyclable items in the trash.

Instead of blaming the system, when faced with an ethical dilemma, UOW environmental engineering student Lachlan Crawford set out to improve the system. His engagement with UOW’s Student Makerspace led to a keen interest in 3D printing, which unfortunately produces a significant amount of plastic waste. 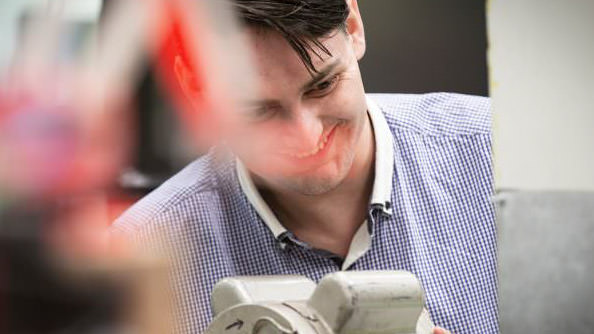 About 60 per cent of the plastic used in 3D printing goes to waste.

“I was asked a question, ‘As an environmental engineer, do you ever feel bad about the amount of plastic you’re consuming for 3D printing?’” Mr Crawford says.

“It really got me thinking, ‘Yes, it does bother me, so let’s do something about it’.”

The problem of plastic waste also became clear to Nathan Riggir when the University of Wollongong opened its Student Makerspace in the library in 2017.

“The nature of 3D printing is that the prints don’t always work,” says Mr Riggir, the Student Makerspace Coordinator.

“We quickly realised how much waste was coming out of the 3D printers. So we started to investigate solutions and discovered a concept inspired by the precious plastics initiative.”

Mr Riggir made a conscious decision to change the plastic used in 3D printing to polylactic acid (PLA). This is a thermoplastic aliphatic polyester derived from renewable resources, such as corn starch.

“It’s still going to be there for a long time before it breaks down.”

He and Meaghan Quirk, Library Client Relationship Officer, decided that recycling was the way forward.

They acquired the tools to turn the 3D filament waste into new filament for 3D printing.

Their tools are fairly limited at this stage. There is a shredder operated with a hand crank, used to break the plastic into tiny pieces before it is heated up and fused together again. 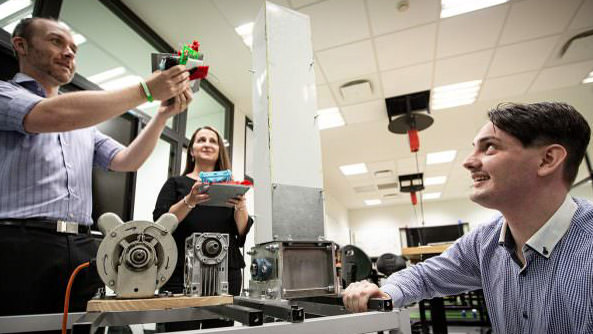 “We’ve just sourced a gear box and a motor, my goal is to have the motorised shredder up and running for Climate Change Week,” Mr Crawford says.

Global Climate Change Week is a big deal at UOW.

Global Climate Change Week, which originated in Wollongong in 2014, is the brainchild of UOW academics and students. It aims to encourage academics in all disciplines and countries to engage with each other, their communities, and policy makers on climate change action and solutions.

So, in a small way, the Student Makerspace will be taking part in the week of action from October 14 to 20.

On average, Australians use 130kg of plastic per person per year. Only 12 per cent of that is recycled. Up to 130,000 tonnes of plastic will find its way into our waterways and eventually into the ocean. Now the wheels are beginning to fall off our recycling system. In the past, we shipped our problems overseas, but a number of countries which once willingly took our waste are shutting us out. China, Malaysia, and India are refusing to take our plastic bottles and other recyclable materials. 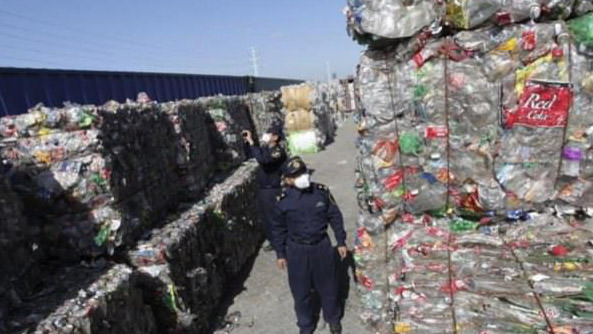 China says it will not accept any more imported garbage

Mr Crawford says Australian companies are beginning to warm to the idea of recycling plastics.

“I know Bluescope is looking at different ways to recycle their plastic and reduce consumption,” Mr Crawford says.

“There are so many discussions about how the climate is changing these days. There’s that follow up discussion about plastic pollution. More companies are becoming aware and wanting to do something, but not always knowing how.”

They want to draw attention to the problem –at least on campus.

“It’s about being aware of what the waste is and where it goes, which is why we’re thinking of making it more engaging, using an exercise bike to break down the waste, so they can stop on their way to class out the front of the library and shred their own waste,” Mr Riggir says. 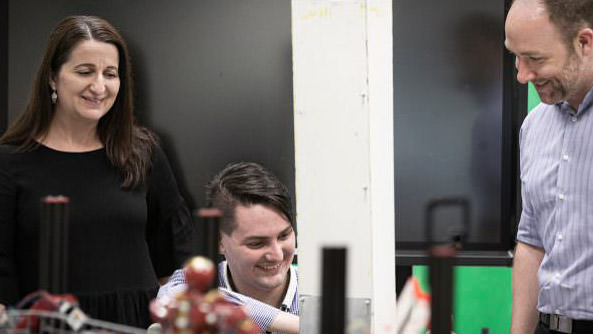 Meaghan, Lachlan and Nathan working on the recycling initiative at UOW

Students are time poor and Mr Riggir has had trouble finding students available to collaborate on the recycling project. He would like to work the recycling initiative into the curriculum, and he’s working with a couple of subject coordinators to try and make this a reality in 2020.

What can they do with the plastic once it’s shredded?

They will need to create moulds so they can remodel the plastic into items of choice once it’s been melted down.

“The moulds themselves are quite expensive, so if we do something like a Keep cup, a lot of people use them and they’re very standard,” Mr Crawford says.

“You could make a lot of Keep cups from all the recycled plastics on campus.”

While it would be great to recycle tonnes upon tonnes of plastic, there is a more significant goal in mind. All three agree that too much plastic is being used needlessly on campus. To make a serious impact, people either need to change their habits or a ban must be enforced.

“To really make a difference I’d be looking to minimise the waste we have on campus,” Ms Quirk says.

“We go through more than 100,000 water bottles per year. I’d like to see single-use coffee cups banned on campus. Coffee cups are worse than water bottles and we can’t recycle them with the equipment we’re making. Plastic cutlery, plates and all polystyrene needs to go too.”