Over the past year, the $80 million building has taken shape

You could walk past the latest construction site at the University of Wollongong and think that it's just another building going up, with the usual cranes and noise.

But behind the scaffolding is one of the most complex and ambitious building projects being undertaken anywhere in the world. And although Wollongong is geologically stable, this building is being constructed as if it's in an earthquake zone.

That's because the Molecular Horizons Building will house two of the most advanced pieces of scientific equipment in the world - Transmission Electron Microscopes (TEM), which are so sensitive, they need to be completely isolated from all forms of vibration and magnetism. And that has presented some interesting engineering challenges.

Distinguished Professor Antoine van Oijen, Research Director of Molecular Horizons, says the research facility is at the forefront of scientific discovery. The Titan Krios microscope, Australia's most powerful biological electron microscope, is central to these breakthroughs; it illuminates how life works at a molecular level.

"When you think of a microscope, you usually think of looking into an eyepiece," says Professor Van Oijen. "But using light, there is a limit to what we can observe - we can't see anything smaller than the wavelength of light. Using a beam of electrons, however, we can magnify things by the millions instead of hundreds. And that makes these machines so sensitive, everything around them needs to be exquisitely still, free of vibration and electromagnetic interference (EMI)." 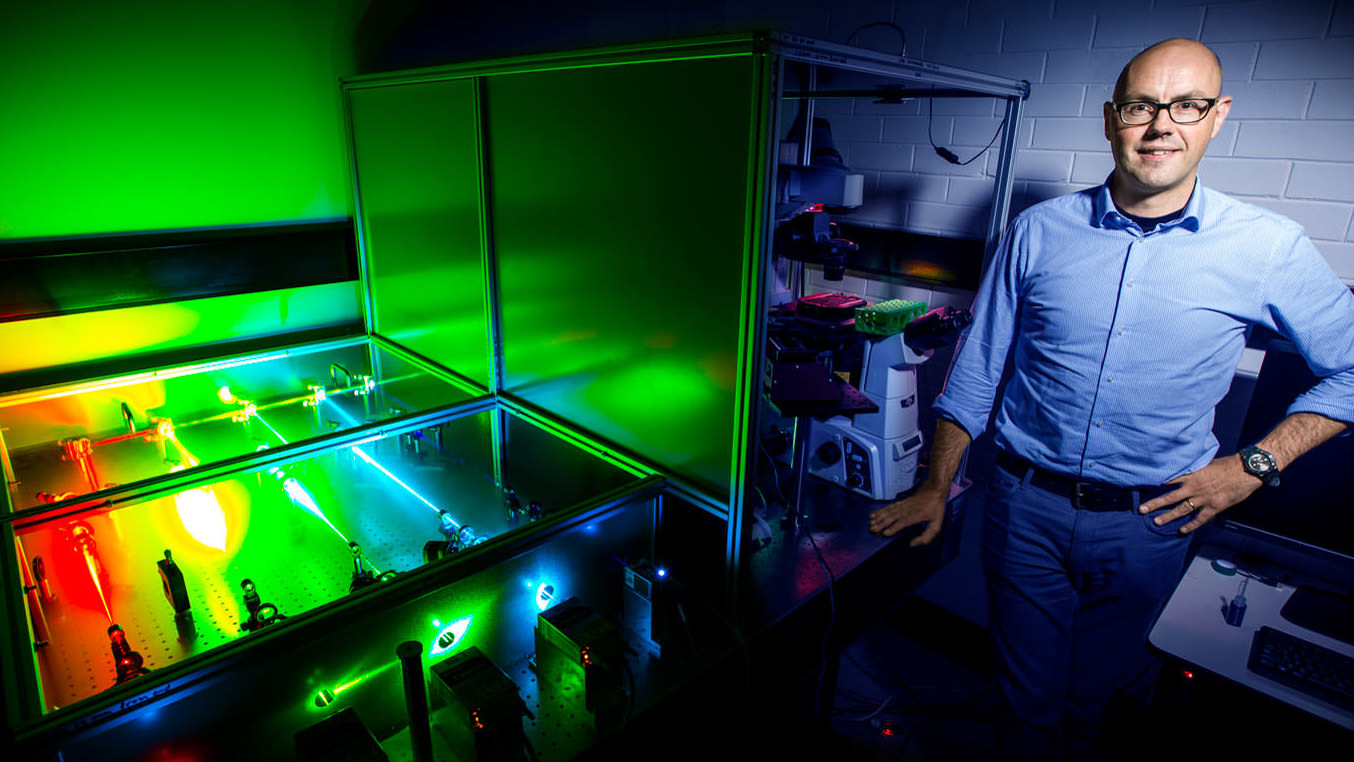 "It's the ultimate expression of 'form follows function'," says Mr Boase. "Once you understand what the microscopes need, then you design everything around them.

"The challenge comes when trying to celebrate the science in the aesthetic of the building, when the microscopes are hidden away in shielded suites deep within the building. This has been achieved through the striking design of the building façade, which also extends into the interior." 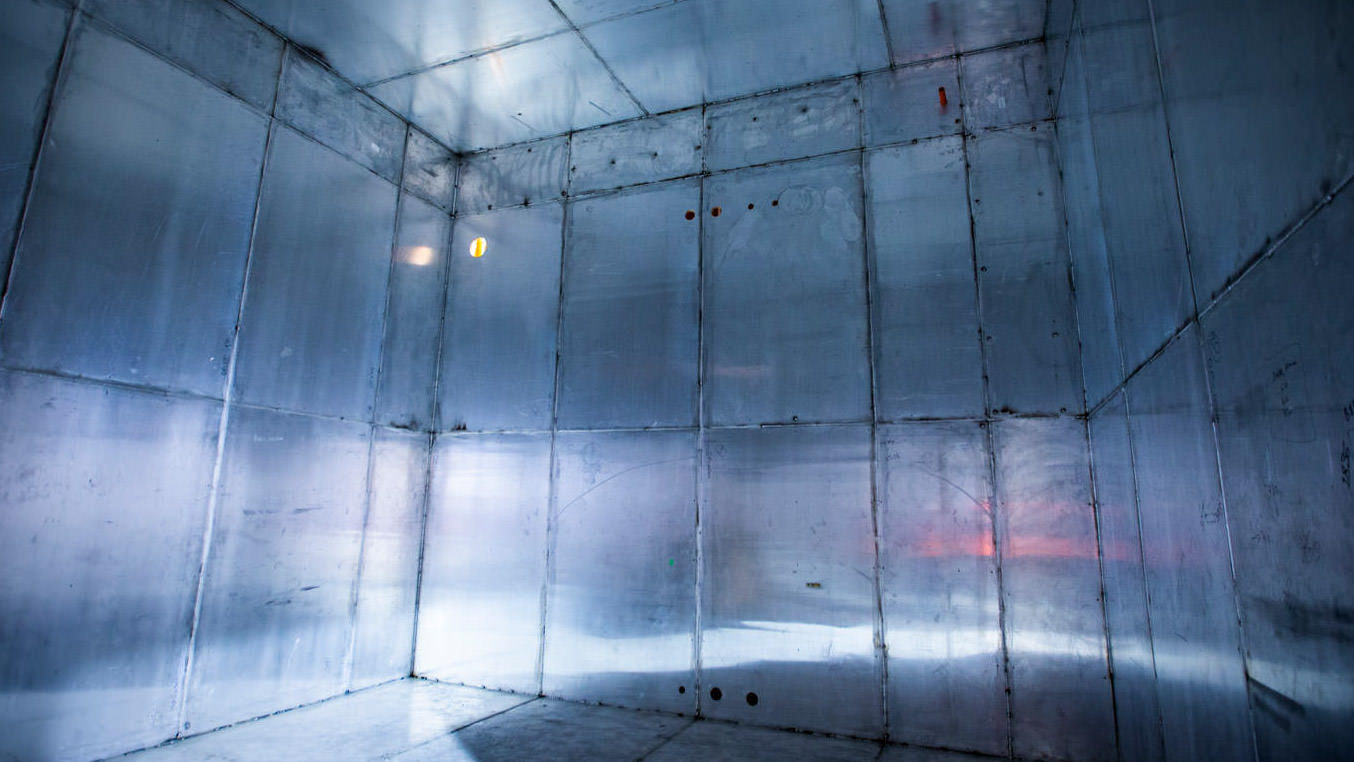 The inside of a stainless-steel microscope suites in the new Molecular Horizons Building. Photo: Paul Jones

Blake Preston, UOW's Senior Manager of Project Delivery, agrees that the Molecular Horizons Building is one of the most complex in the world.

"We had to take into account the vibration from the cars and trucks that pass by, and we also had to put the lift in a separate building. We also can't allow any kind of oscillation either, so that means no dishwashers or washing machines in the building," Mr Preston says.

The biggest challenge, however, is to remove any kind of electromagnetic interference. Even the smallest magnetic field nearby can throw off the microscopes' incredible precision. Any kind of ferrous material can become a source of magnetism, so the designers had to choose a completely different material to reinforce the concrete.

Concrete is a magnificent, versatile building material under compression, but it needs steel reinforcing bar (usually known as "reo" in Australia) to give it strength under tension. Just about every concrete building in Australia uses steel reo. But not Molecular Horizons.

"We have to use a glass fibre reinforced polymer reinforcing bar imported from Canada," says Mr Preston, "And since we can't use the steel wire that usually ties it together either, we use plastic cable ties. There are over a million cable ties in this building."

The heart of the building are the two "TEM Suites" that will house the microscopes. These are lined with non-magnetic stainless steel shielding, on top of concrete piles that are dug more than 14 metres into the ground.

It's the first time in the world a building has been made like this, and the builders, Richard Crookes Construction, have had to adopt the Canadian building code and overlay it on the Australian code. It's a similar process to building foundations in an earthquake zone, topped with multiple layers of non-magnetic stainless steel and polymer. The aim is to create an area of complete isolation - known as "The Zone of Influence" - around the microscopes.

The Zone of Influence will become familiar to the scientists and other staff working in the Molecular Horizons Building. When the microscopes are working, there will be indicators to tell people not to cross the line into the Zone, as even a footstep might set up an unwanted vibration. 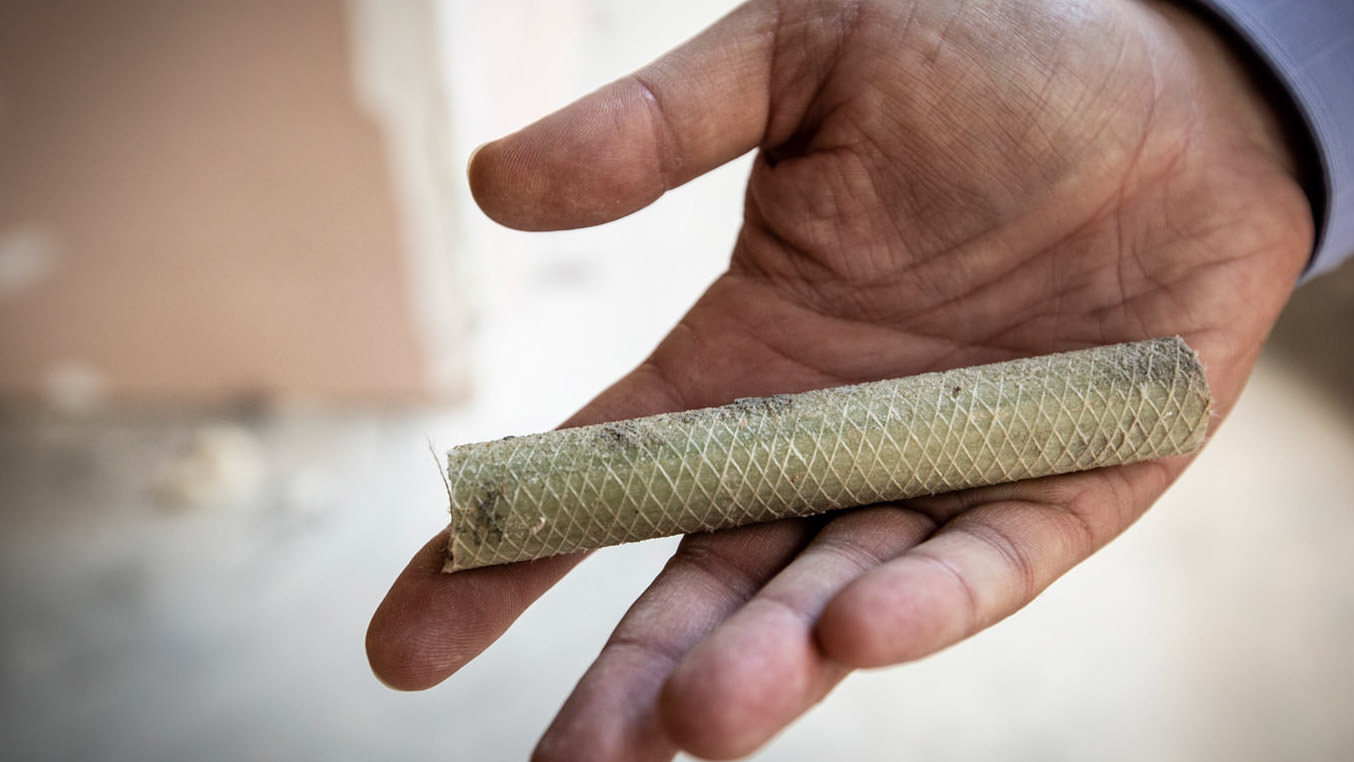 This level of architectural and design detail might seem extreme, but Mr Boase loves it, having designed high-tech facilities for the Australian Nuclear Science and Technology Organisation (ANSTO), among many others. There is no room for error in this type of project.

"Most architecture revolves around the way people live, and rightfully so," he says. "You want to make them comfortable in their homes, for instance. But this project is all about what the microscopes need to work at their optimum. It's either right, or it's wrong. I get great satisfaction in getting it right."

That's not to say the human factor hasn't been taken into consideration. "Once we got the building engineering for the microscopes solved, then we looked at ways to make it flow as well as we can for the people in the building too."

Considering the incredible work that these microscopes can carry out, it doesn't seem too much to walk a few flights of stairs, or go without a dishwasher.

The engineering in this building is not the only cutting-edge aspect. Even the finances took some lateral thinking - after all, how do you quote on something that's never been done before?

"It's taken a real sense of trust between the architects, the builders and the University," Mr Cole says. "They come across a new challenge, such as using the polymer reo bar for the first time, and we have to find a way to solve it and cost it. But I'm glad to say we're on time and on budget." 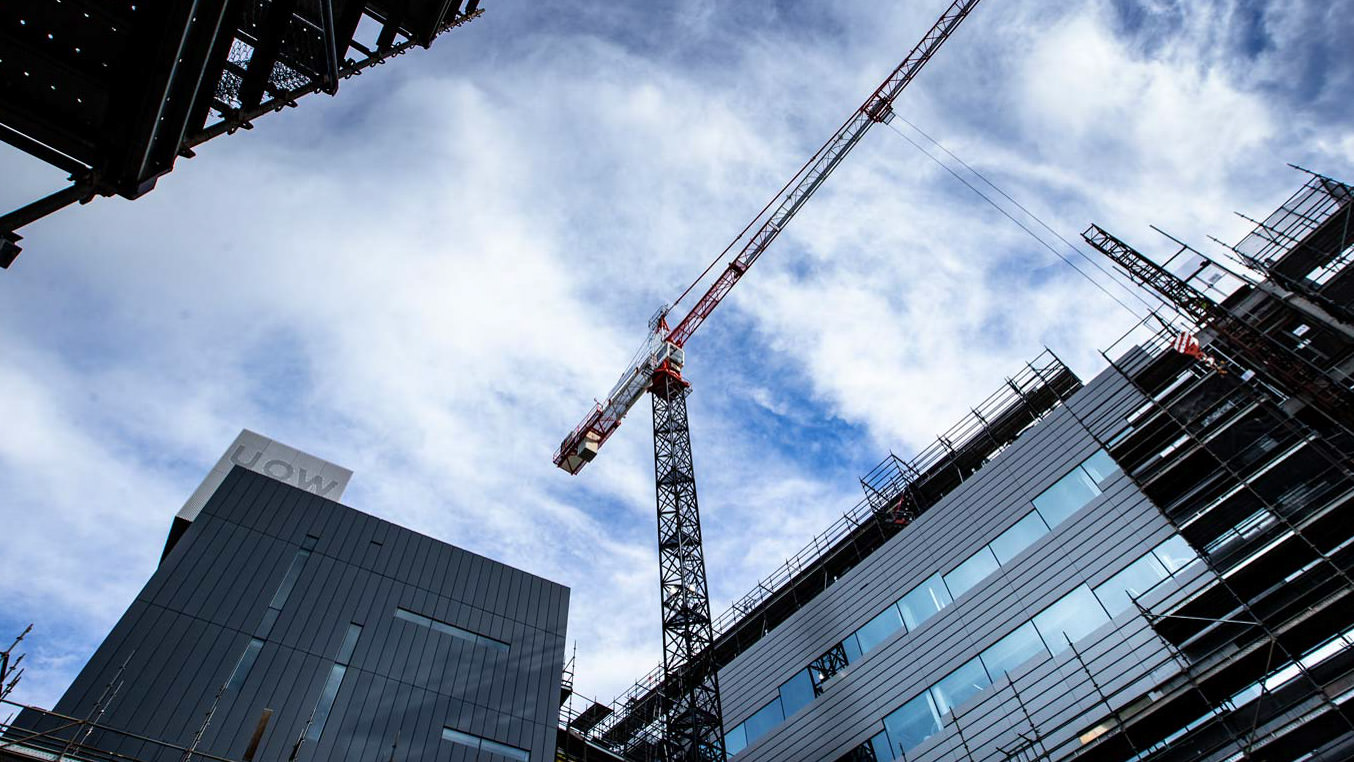 It has been a fascinating, and at times stressful, experience for Professor van Oijen, as he has watched the building that will be home to his team of groundbreaking researchers come to life.

"I've never had to look after a whole building before," he says, "We used consultants on EMI, and another firm of consultants on vibration, for instance. Watching it all come together has been a combination of exhilaration and nerves. But there has been an enormous sense of pride in delivering a high quality outcome, especially from Richard Crookes."

You can sense that the whole construction team, from the apprentices to the project managers, has been energised by the fact that they are creating the most advanced building in the Southern Hemisphere. And one day, they all hope the scientists using Molecular Horizons will start to make some life-changing medical breakthroughs.

So, what are these machines capable of? Professor Van Oijen, appropriately, uses a building analogy.

"Seeing the actual shape of molecules, especially proteins, is the real power of these microscopes," he says.

"Think of it like a lock and key. In the body, imagine there's a protein that's not functioning any more, and it's creating a disease, like a cancer. That protein is the lock, and we're trying to 'open' it with a drug, which is the key. So instead of fiddling around trying different keys, we can use the microscope to see its exact structure, and make a specific key to fit."

As Mr Cole stands in one of the stainless steel-lined microscope suites, he reflects on the potential of this immense, groundbreaking project to shape the future of health research.

"It's been incredible," he says. "It's going to be huge, for the University, and for the world." 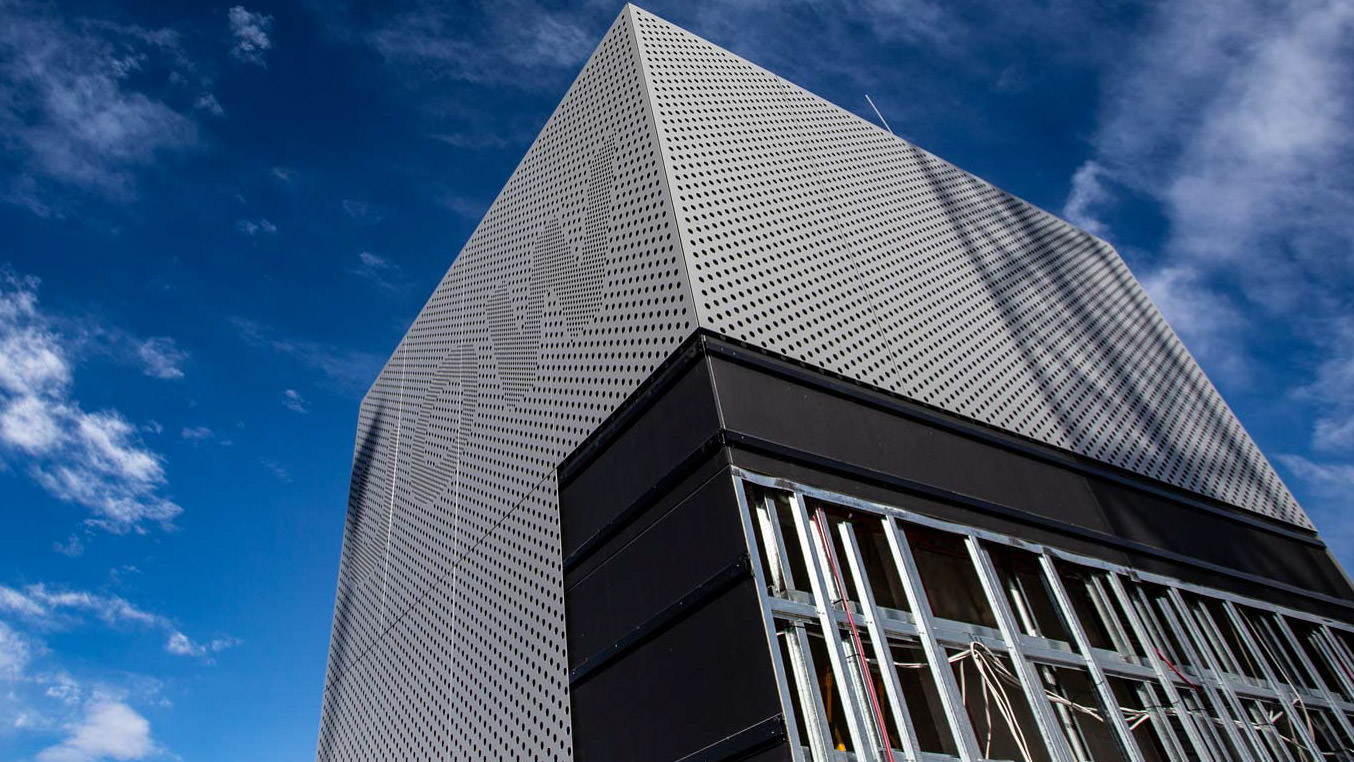