Facing one of the greatest 21st century health challenges

You could be forgiven for thinking this is a description of life in the middle ages, but the phenomenon is on the rise and it's known as antimicrobial resistance, or superbugs.

According to Distinguished Professor Antoine van Oijen, it represents one of the biggest health challenges of the 21st century.

As a molecular biophysicist with the University of Wollongong's (UOW) School of Chemistry and Molecular Biosciences, Distinguished Professor van Oijen likens the seriousness of superbugs to that of global warming.

"In the mind of many people, superbugs are the 21st century health challenge," he says.

"There are some scary predictions out there that say by 2050, the number of deaths globally attributed to superbugs is going to be far more than the number of people dying from cancer and cardiovascular diseases.

"It's something that scientists have been saying for decades, but has only recently been picked up by policy makers and the general public at a level that I think is comparable to global warming in terms of seriousness.

"Every time you have surgery, it's a standard thing that you would use antibiotics to make sure that you don't get any internal infections.

"These kinds of very obvious things that we take for granted could go down the drain."

Distinguished Professor van Oijen is leading a team of researchers to tackle this challenge from all angles: understanding the science of superbugs; developing new drugs and diagnostic equipment; determining how superbugs travel; and how changes in our behaviour could stop them from spreading.

Interdisciplinary research groups, which already exist in Wollongong, have been focused on antimicrobial resistance for several years. They will soon be propelled even closer to answers with UOW's $80 million Molecular Horizons: Centre for Molecular and Life Sciences, due for completion in late 2019.

The facility will house cryo-electron microscopy, powerful visualising equipment allowing researchers to examine diseases down to the finest detail, or the molecular and even atomic level.

An Artist's impression of UOW's $80 million Molecular Horizons: Centre for Molecular and Life Sciences, due for completion in late 2019.

The building itself, the technology, and the researchers are coming together to achieve a common goal: to drive outcomes for our health and ultimately save lives.

The ability to see what is happening to bacteria and how it is changing is one piece of the puzzle. Equipment at Molecular Horizons will allow researchers to visualise these changes and develop new antibiotics accordingly.

"We've launched a number of programs which, in part, look at the molecular mechanisms that cause bacteria to become insensitive to antibiotics," says Distinguished Professor van Oijen.

"This information would allow us to develop alternative antibiotics that circumvent these mechanisms. Seeing is believing: we take an approach of visualising the molecular and cellular players. The moment you know how the molecular elements in bacterial resistance mechanisms look like and how they behave, you can start to think of ways to interfere with these processes and prevent them from happening."

As bacteria changes and outgrows the drugs of today, new drugs must be developed. While this approach to fighting superbugs is essential to future health outcomes, Distinguished Professor van Oijen says it has its limits.

"In my view, developing new antibiotics is important, but in the end, it's kicking the can down the road. No matter what drug you put on the market, the bacteria will eventually become resistant to it. 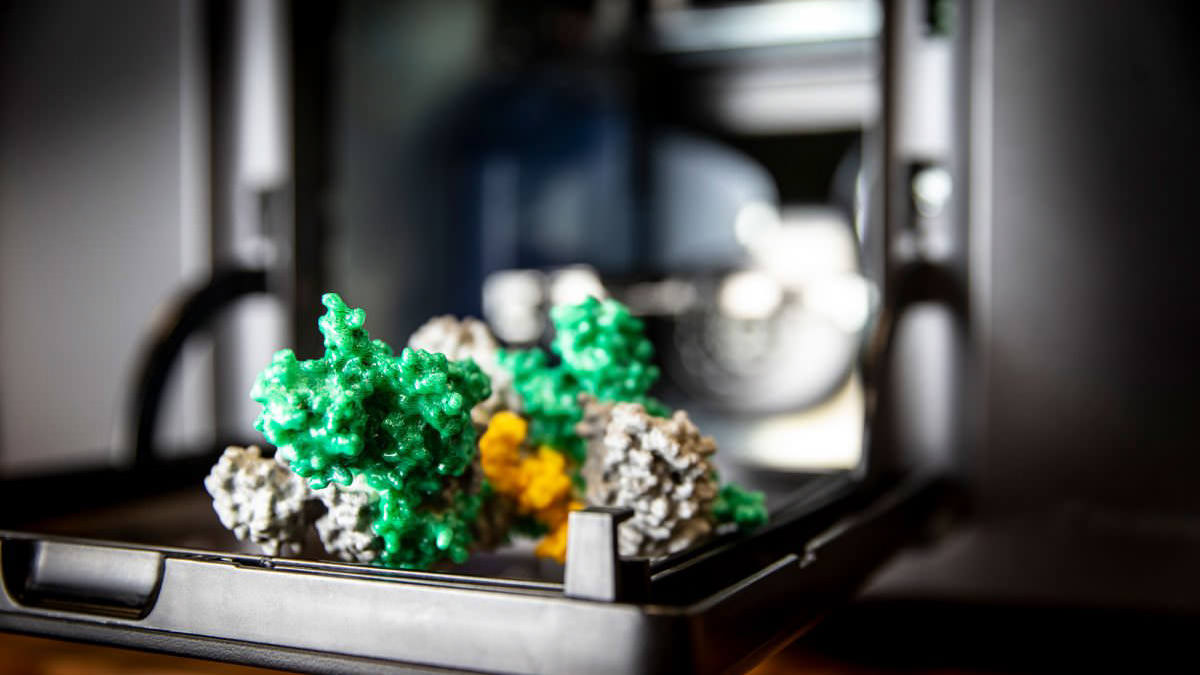 This problem of antibiotic overuse leads researchers to question our behaviour - how, why, and when do we use antibiotics? The team is looking beyond cells, drugs and diagnostics to also focus on antibiotic consumption.

"As a community, we consume antibiotics at an alarmingly high rate, not just by us as patients receiving antibiotics from GPs, but also through agriculture. There is lots of antibiotic use in the livestock industry," says Distinguished Professor van Oijen.

"We are trying to understand the drivers there. What are the policies and prescription guidelines? What is the dynamic like between patients and GPs? Often patients walk in with the sniffles and almost demand antibiotics, because at least then they feel they have gotten something out of their visit."

All of these behaviours can potentially either help or hinder the spread of superbugs, which is something researchers are also tracking.

This is where the sciences, such as biology, chemistry, and physics, meet the social sciences of public health, psychology, sociology, and more to understand how antimicrobial resistance unravels throughout the community.

To do this, UOW researchers are using the Illawarra/Shoalhaven region in New South Wales as a test sample.

"The cross section of the population in terms of age, socioeconomic status, percentage of Indigenous people, education level, ethnicities - it's almost a perfect match for the entire country. The Illawarra/Shoalhaven is truly a microcosm of Australia as a whole," says Distinguished Professor van Oijen.

"We are rolling out a number of studies in the region to understand how antimicrobial resistance, or superbugs, travel through the community.

"As a second phase, we will start to put in place interventions - actual steps you can take to reduce the burden of superbugs.

"Those interventions can be anything from behavioural changes, for example the GP-patient interaction, such as helping GPs manage patients who walk in and demand antibiotics, but also the science intervention, such as diagnostics that would allow a GP to conduct testing on the spot and have a result in 15 minutes.

"The uniqueness is you can do this research in this region and then measure whether it helps. It will act as a litmus test for the rest of the country." 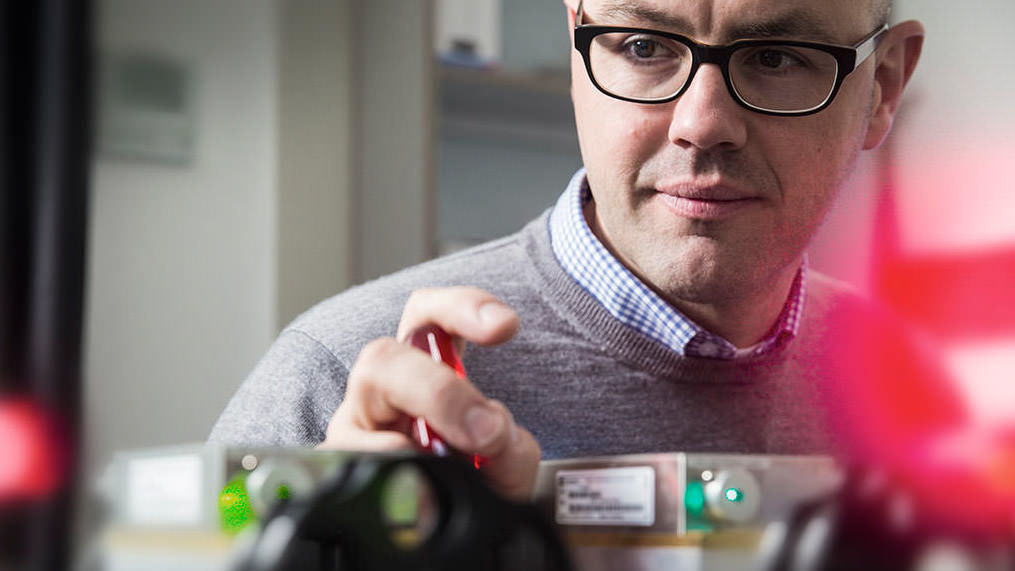 Distinguished Professor van Oijen, a molecular biophysicist with the University of Wollongong's (UOW) School of Chemistry and Molecular Biosciences.

New diagnostic technology is another important component of the research that will have an almost instant impact in curbing the spread of superbugs.

"At the moment, if you go to the GP and they suspect you have a bacterial infection, you deliver a sample, but it takes two to three days for a result to come back. That's too long to wait to start treatment, so the GP will give you a script for antibiotics just in case - essentially not knowing which antibiotic might be effective.

"That's a big problem. It allows bacteria to become resistant.

"One thing we want to do at Molecular Horizons is to develop tools and diagnostics that allow GPs to test your symptoms in their office. These new methods might give them a result within the hour and will then allow them to decide on which is the best antibiotic to use.

"I think that's a really good example of technological development that will have an immediate impact on health care."

UOW's multidisciplinary approach to combating antimicrobial resistance is strengthened through international collaborations, incorporating knowledge from researchers at several United States universities, including The Rockefeller University, University of Southern California, and University of Wisconsin to name a few.

What does it all mean?

Although the research is ongoing, successes in this area will mean new technology, new drugs and new policies so that when you get a bacterial infection, it can be cured.

It means if you need minor surgery, your life won't be at risk. It means better health outcomes for society.