Chernobyl: a lesson in truth

Secrets were kept, mistakes were made, and people were exposed.

There was a time when no one knew what happened at Chernobyl. Secrets were kept, mistakes were made, and people were exposed. Now, more than 30 years later, and with the release of HBO’s successful mini-series, the disaster is once again in the spotlight.

On 26 April 1986, a catastrophic accident occurred at the Chernobyl Nuclear Power Plant, located just outside Pripyat, in Ukraine's north and the then Soviet Union. A standard test to see how their No. 4 reactor would fare in the event of a power outage led to a reactor core explosion, which sent unprecedented amounts of radiation into the atmosphere. It remains the worst nuclear accident in history.

Distinguished Professor Anatoly Rozenfeld was one of the 300,000 people asked to work in the affected area surrounding Chernobyl afterward. Using his own patented technologies, Professor Rozenfeld, now Director of the Centre for Medical Radiation Physics at the University of Wollongong, contributed his expertise within the Radiation Protection Team in the three years following the accident. 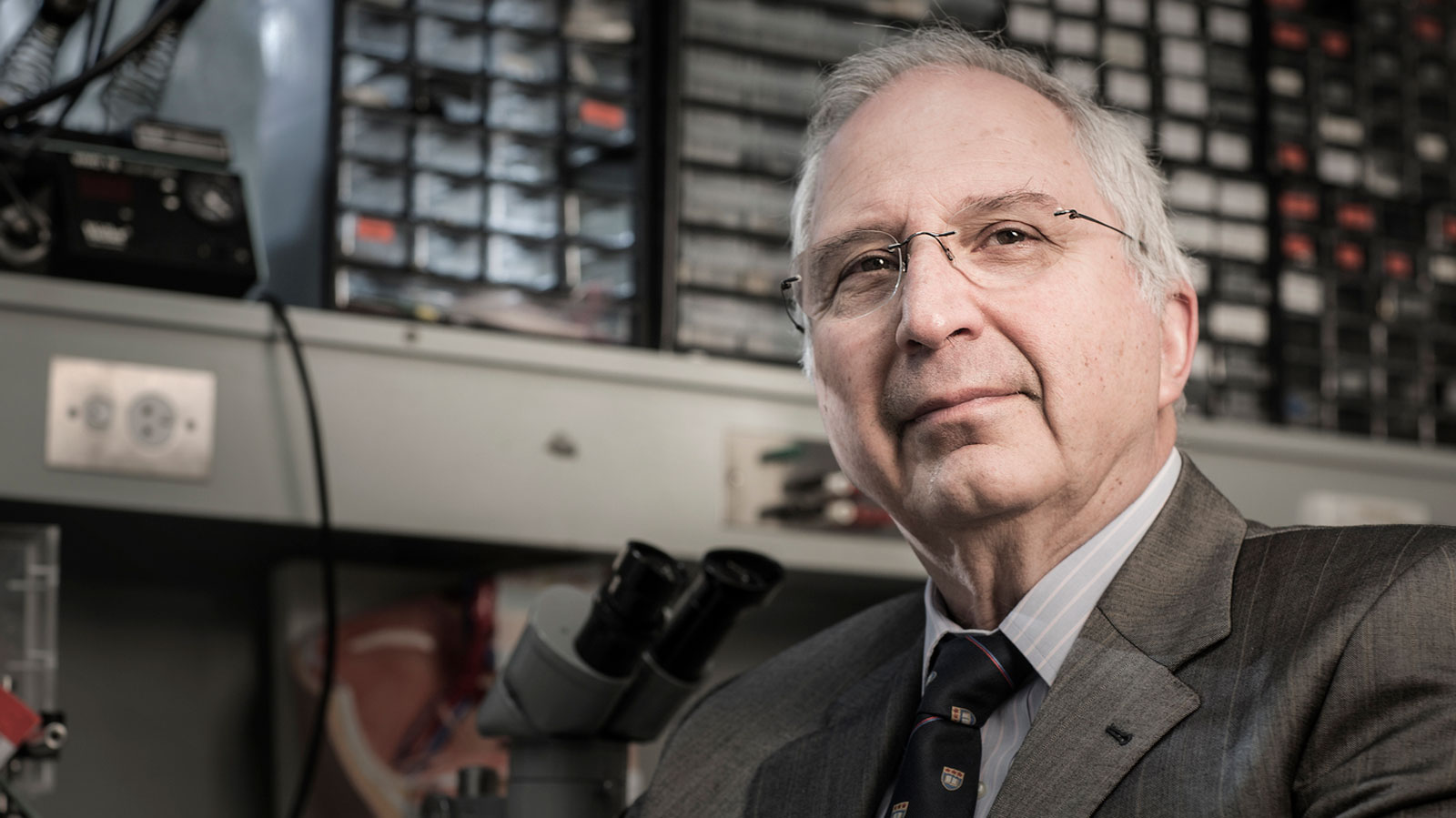 Professor Rozenfeld sits at the desk in his neat office on campus, awards and photographs stored proudly in a glass cabinet. A meeting table sits beside a large bookshelf holding PhD theses of his students. He's brought a small suitcase with him and pulls from it a folder of old photographs and documents from his time in Chernobyl.

Although they hold bleak black and white images upon their surface, the photographs are displayed, one by one, with a certain pride.

"There are a lot of memories. It's a bad story, a human mistake, a reactor design flaw," Professor Rozenfeld says. 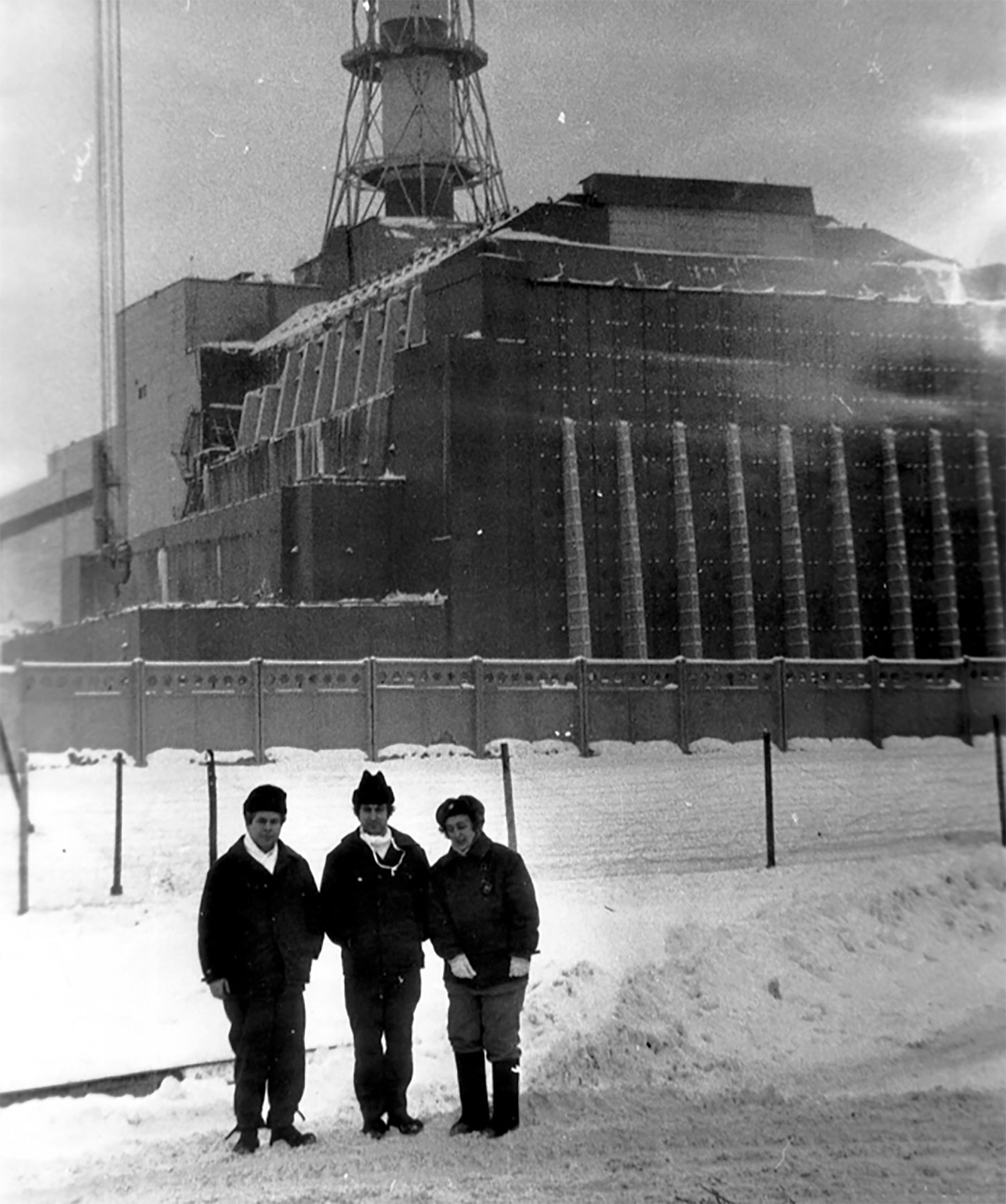 The renowned radiation physics researcher crammed his viewing of HBO's acclaimed Chernobyl into the weekend just before we meet.

"It's true. It's like it was in reality. The reproduction was quite accurate," he says of the portrayal.

On April 28 1986, two days after the explosion, Professor Rozenfeld arrived at his workplace at the Institute for Nuclear Research in Kyiv, 140km south of the Chernobyl Nuclear Power Plant.

"I remember, we came to work and all the dosimeter alarms in each building were ringing. We couldn't understand why."

At first, they were convinced the contamination must have been internal, brought in from their experimental nuclear reactor, perhaps on the bottom of someone's shoes. But within 30 minutes, the physicists had made a phone call to Chernobyl and a thermal (heat) explosion was reported. This of course, was not entirely correct.

Ulana Khomyuk, a fictional nuclear physicist played by Emily Watson in HBO's Chernobyl, was created by the show's screen writers to represent the many scientists who worked behind the scenes. Like Khomyuk, Professor Rozenfeld recalls taking a test smear off the window and using nuclear spectroscopy detectors to measure the radiation. What he found was an unusually high 50 or more isotopes, which could not have been a byproduct of a mere thermal explosion.

"We got together and said yes, it was a nuclear accident," he says. 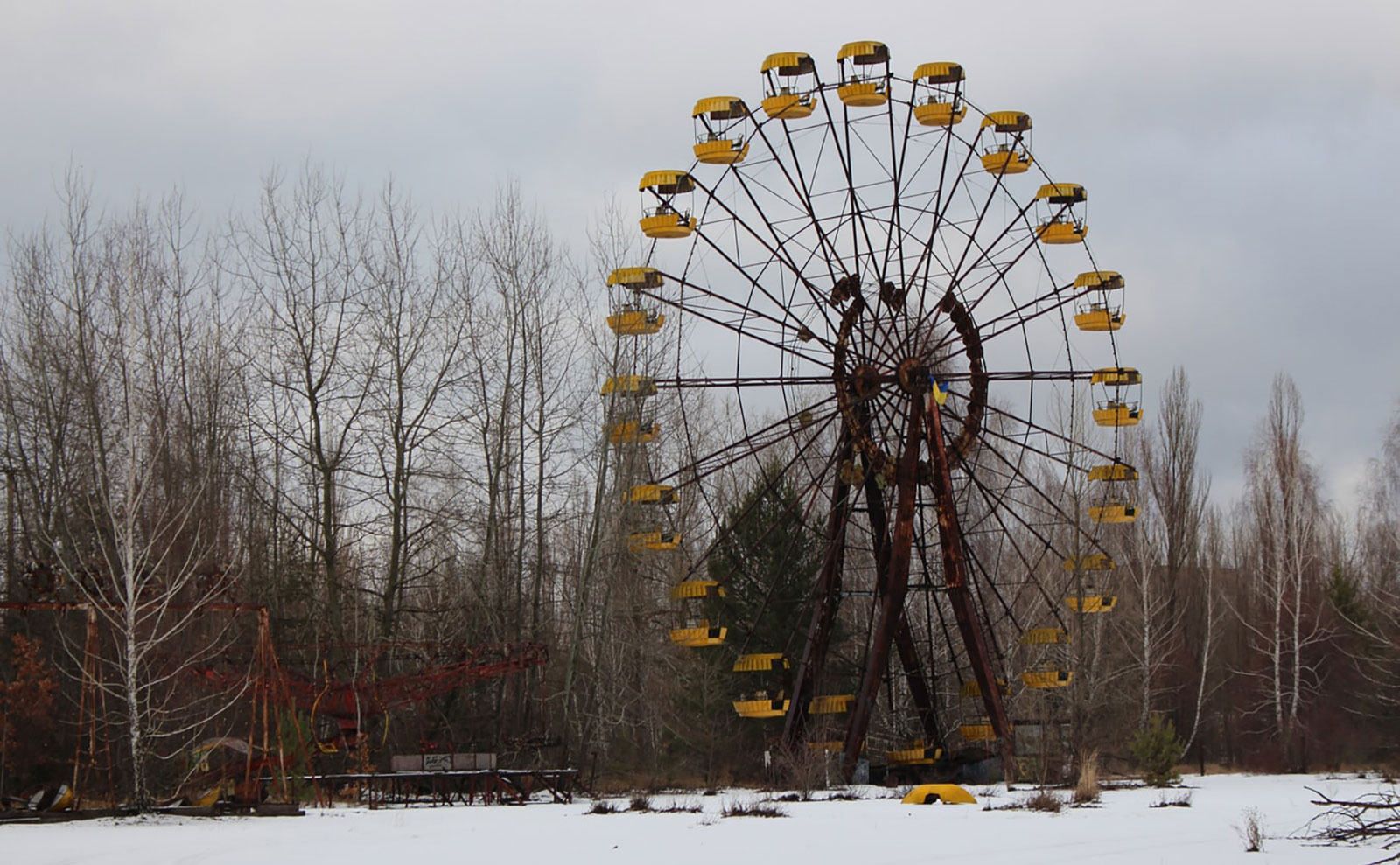 Like many of his colleagues, Professor Rozenfeld was sworn to secrecy. "We were not allowed to tell anyone," he pauses "but certainly, I told my wife and my family to close the windows and put protective strips of paper and glue up along any openings. I told my friends with children to go East, outside 1000kms to Crimea".

Though, even at that point, they had limited information and were unaware of how serious it was. After the late-night explosion of the No.4 reactor, plumes of radioactive steam were sent into the atmosphere. The radioactive fallout spread across Eastern Europe with the wind, impacting not only Ukraine but also nearby Belarus and Russia. An open-air reactor core fire burned for nine to ten days afterward, producing the same amount of radioactive contamination as the initial explosion. 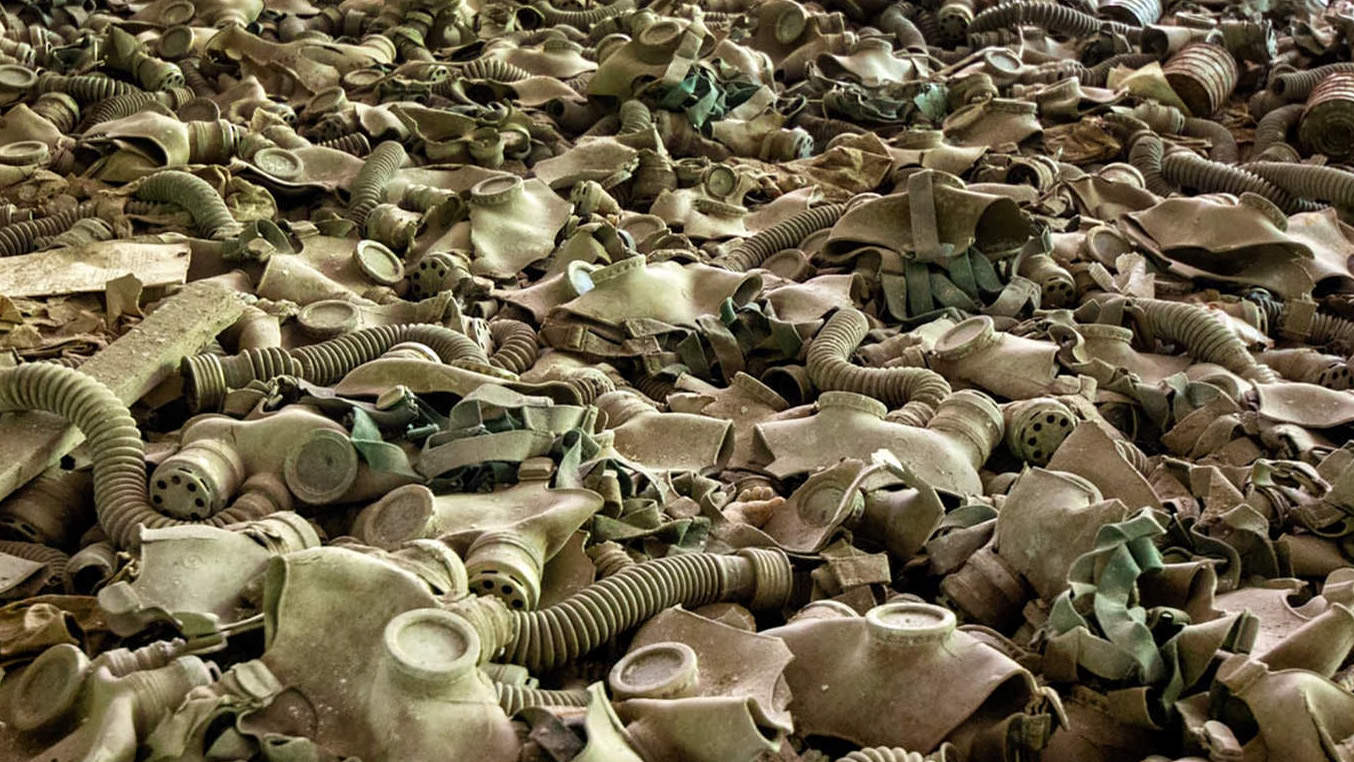 It is estimated that Chernobyl, as the accident became known, was the cause of at least 49 deaths within two months of the explosion and thousands of cases of cancer, particularly thyroid cancer, that emerged in the years following the explosion.

Unfortunately, more problems were created while trying to fix the original.

"In reality, everyone is good," says Professor Rozenfeld, "but that situation with Level 7 radiation had never happened before. People simply didn't know what to do".

Misinformation and a lack of understanding what had initially happened, meant mistakes were made.

"Science education in the Soviet Union was top and the physicists at the time were very good, they were some of the best in the world," says Professor Rozenfeld. "Politics was involved, which meant people didn't like to share their opinions". 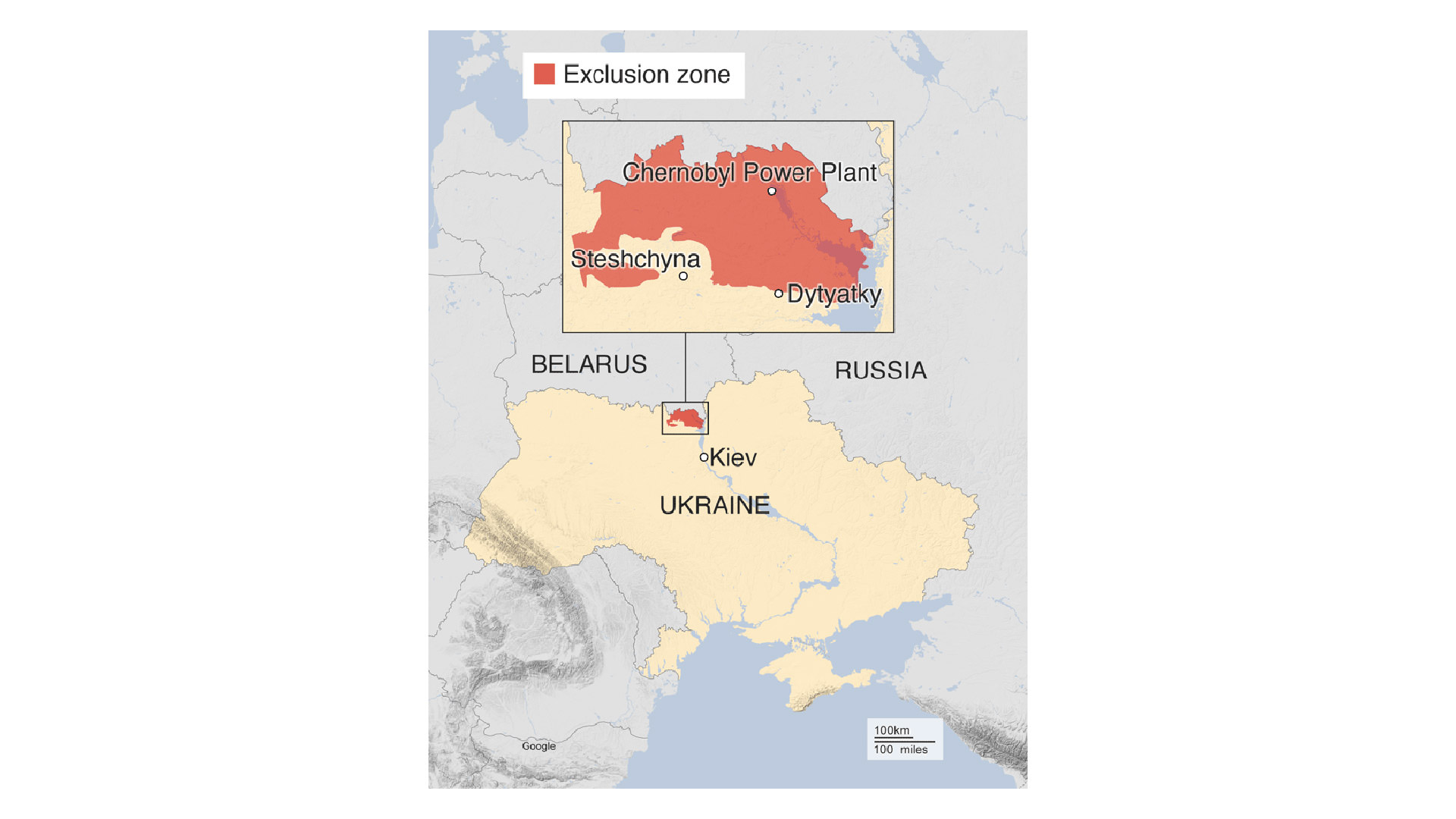 It took 36 hours before people within a 10km radius were evacuated and nine days before Valery Legasov, the Chief of the Commission Investigation and the protagonist of the TV series, played by Jared Harris, was able to convince authorities to act on removing citizens from what is now known as the Chernobyl Exclusion Zone.

Professor Rozenfeld puts this down to people being too scared to make decisions with such high stakes. Of the evacuation, he says it was "exactly how it was in the series: endless buses coming, taking people. Initially it was 10km zone, then 30km, then it became 50km". 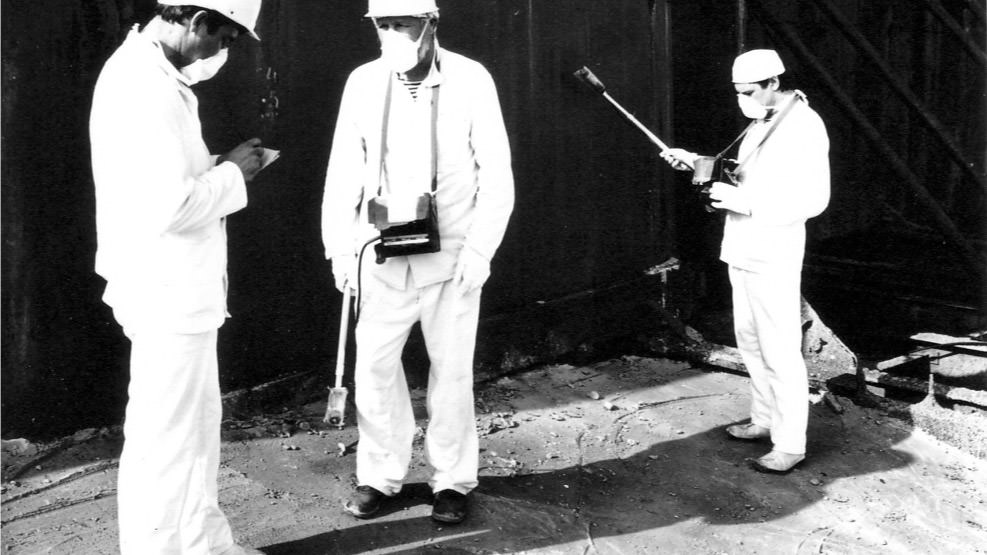 Professor Rozenfeld's colleagues, physicists from Kiev Institute for Nuclear Research (KINR) surveying a wall after construction of the concrete sarcophagus at the No. 4 reactor, 1986. Image supplied.

His work at Chernobyl took place in the three years following the accident, which isn't depicted in the series. He was never there for more than three days in a row. When he arrived there about a month after the accident, the radiation in some areas was at normal CT scan levels (a single CT scan of the chest is equivalent to the radiation exposure of 70 chest X-rays), that is, much higher than the natural background radiation levels before the accident.

"In terms of research, it was very interesting. But it was also dangerous. People were not always equipped with proper dosimeters," Professor Rozenfeld says.

He goes on to explain that the radiation exposure outside of the reactor was 'mixed', including both gamma and strong beta components. This is what made interpretation of the doses difficult to determine, especially as displayed by some of the available dosimeters at the time. 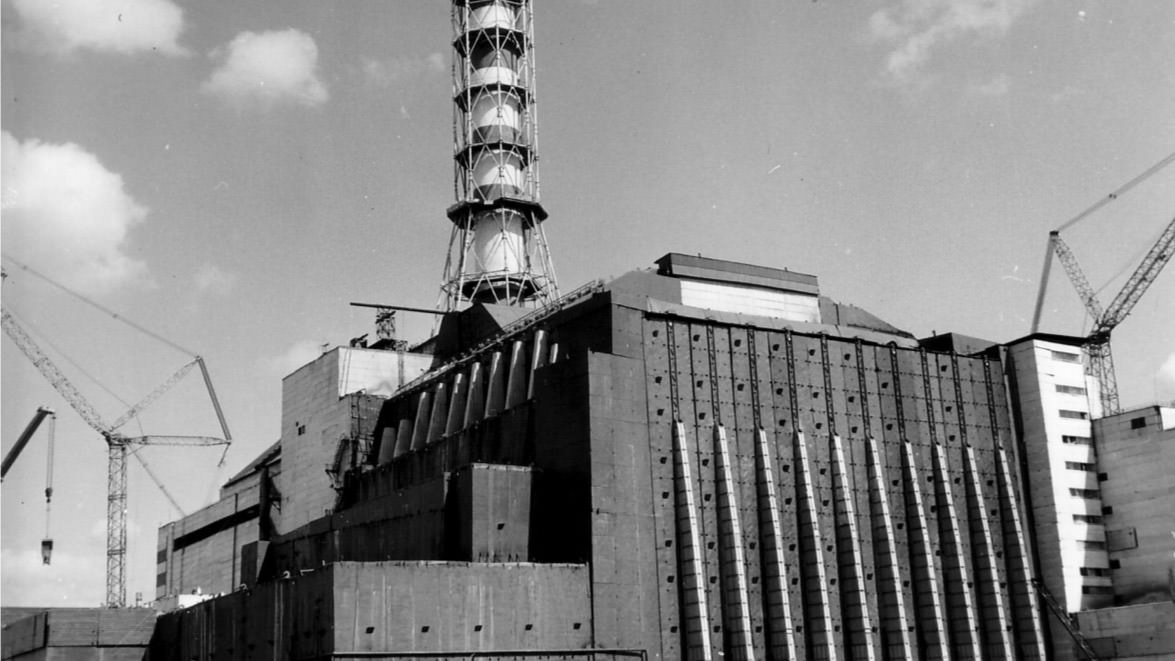 The finished sarcophagus at No. 4 reactor, built in extreme conditions to contain contamination, November 1986. Due to continued deterioration over time, a new structure was put in place in 2018. Image supplied.

The team of physicists and engineers working on measuring the radiation in the ensuing years were called Liquidators. Their main contributions were to measure radiation doses outside the reactor and develop mixed radiation field detectors for a monitoring system, made up of nearly 200 different types of sensors. Along with his colleagues, Professor Rozenfeld patented radiation detector technologies that were used for neutron and gamma radiation detection inside the sarcophagus, a protective shelter built over the No. 4 reactor to contain contamination. "These were monitoring the doses of thermal neutrons in the extremely strong gamma radiation background," he says.

Each Liquidator received a certificate of thanks and a medal for their work from the Soviet politician who supervised the crisis management of Chernobyl, Boris Shcherbina, played by Stellan Skarsgard in the adaptation. Their measurements of radiation levels provided the data that would dictate safety measures within exposure parameters. An example of this from the TV series was when men were asked to remove rubble from the roof of the reactor. They had a 40 second time limit, exposing them to the maximum dose a human should receive in their lifetime. Any longer and they could have died. 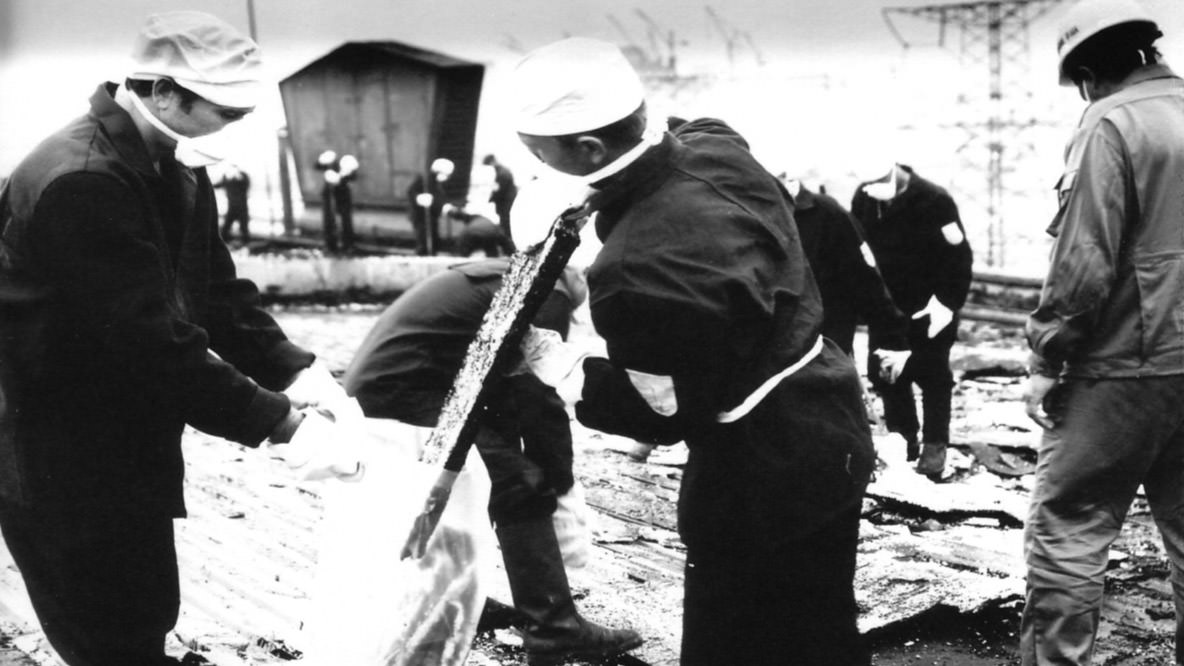 Professor Rozenfeld was keen to ensure the inclusion of someone very important in this story, who he believes should have been mentioned in the film. Professor Lev Fedorovich Belovodsky, Head of Radiation Protection and in charge of the clean-up prior to the construction of the sarcophagus.

"We collaborated together on the development of the gamma-neutron dosimeters before and after the Chernobyl disaster. He was a great scientist and a really famous guy," says Professor Rozenfeld, who brings out a photograph of Professor Belovodsky in a control room, viewing live footage from the robots used in a clean-up attempt of the roof. 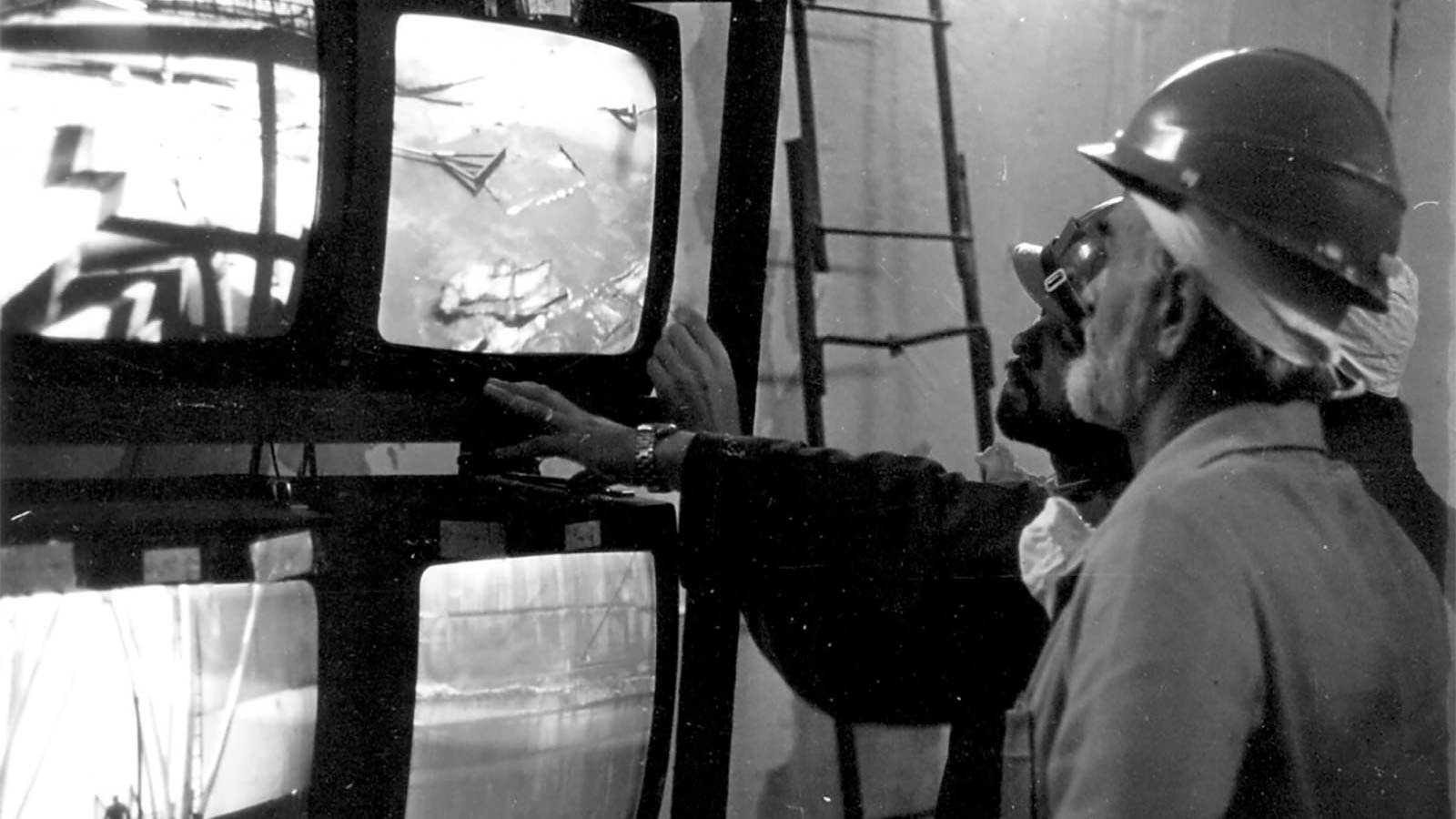 Belovodsky monitoring the clean-up on the roofs of the reactors, 1986. Image supplied.

"He contributed a lot. Due to his unique previous experiences, he knew how to deal with this radiation accident, and he took it all on his shoulders."

Friends for many years after, Professor Belovodsky visited Professor Rozenfeld at UOW in 1994, where he presented a lecture and his own documentary movie about the Chernobyl disaster. Despite having lost touch in more recent years, he still holds a strong admiration for his courage and dedication to doing the right thing.

In the years since Chernobyl, Professor Rozenfeld moved to Wollongong, where he set about building UOW's capability in medical radiation physics. As the Director and Founder of UOW's Centre for Medical Radiation Physics, he heads a team of more than 100 researchers, adjunct staff and student researchers, making cancer treatment safer and more effective.

A natural teacher, Professor Rozenfeld draws a diagram in a notebook full of similar sketches to explain how their cancer treatment works. He's enthusiatic in his explanation, always keen to include the names and successes of his collaborators. He smiles as he says "I am very excited about it all." 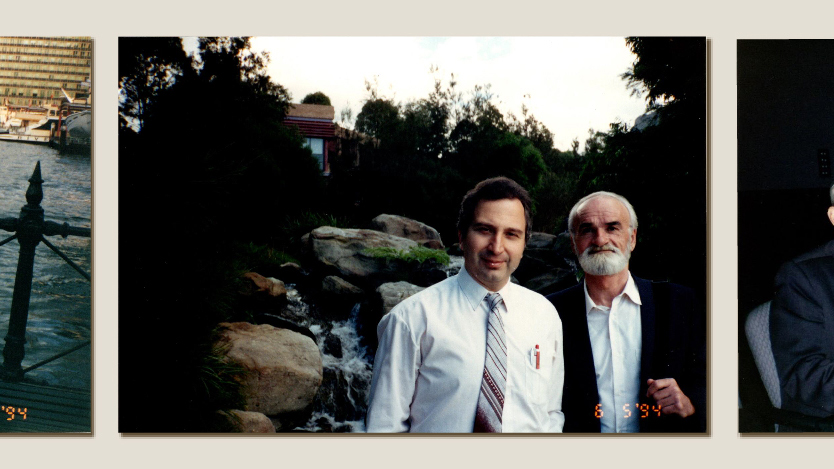 Placing the old photographs back into their folder, Professor Rozenfeld reflects on the legacy of Chernobyl.

In response to a particularly poignant quote attributed to Valery Legasov, the disaster is referred to as "a gift" for its power to prove that science and truth do not care about our wants or needs.

"The truth… doesn't care about our governments, our ideologies, our religions. It will lie in wait, for all time," Legasov said.

It is a sentiment with which Professor Rozenfeld agrees. "It's not good when science is allocated political agenda," he says, "The truth is most important".