Can the arts and sciences save the Great Barrier Reef?

This is the story of how two artists, a marine scientist and a social scientist joined forces to raise awareness of the threats facing the Great Barrier Reef.

Dr Sarah Hamylton has spent close to two decades studying the wonders of the blue.

A scientist and diver, she has watched with increasing desperation as the Great Barrier Reef, the site of countless hours of fieldwork, has become ground zero for climate change. But the scientific facts and urgent missives from scientists on the frontline, who have been experiencing the devastation of warming ocean temperatures and rising ocean acidification for years, have not cut through to policymakers.

Dr Hamylton and a team of interdisciplinary researchers from the University of Wollongong decided to try a different way of getting the message out.

How can art, science and social science work together to save the Great Barrier Reef? This was the provocative question they posed at the outset of their project. They didn’t have the answer, but it was worth a shot. 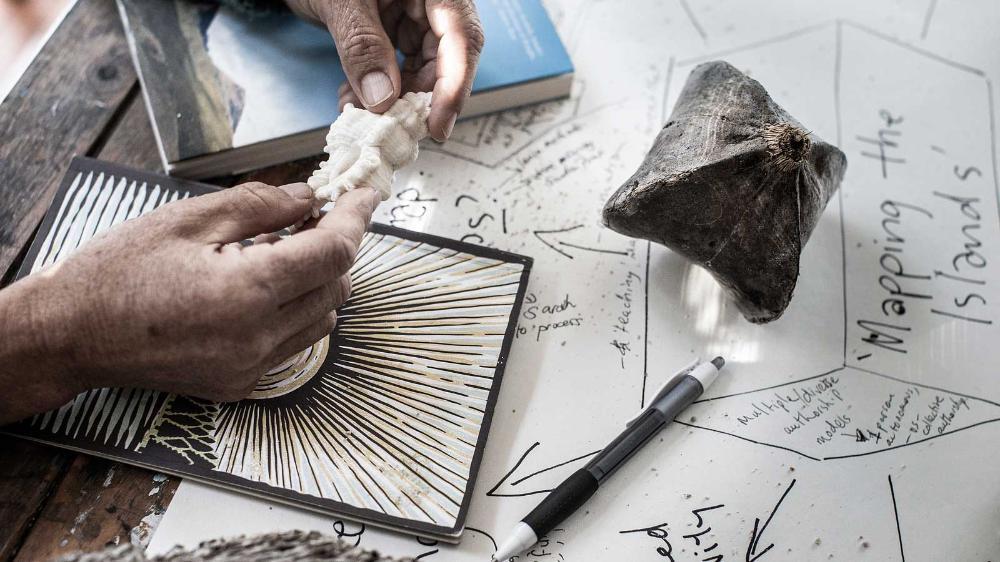 Dr Hamylton, Dr Leah Gibbs, Dr Lucas Ihlein, and Ms Kim Williams came to the project from diverse backgrounds, and brought a passion to try to change the conversation and raise awareness about the urgent situation facing Australia’s national treasure.

“In the last few years, the Great Barrier Reef has twice undergone mass coral bleaching,” Dr Hamylton explains. “This is an unprecedented phenomenon, which has killed or severely impacted up to two thirds of the Reef’s coral.

“Now, more than ever, it is imperative to translate the findings of environmental science into sustainable behaviours that can address this challenge.”

The team had known each other for several years, but had never before joined forces in the name of research. Dr Gibbs is a social scientist, Dr Ihlein is an artist and research fellow who explores environmental problems through socially engaged art, and Ms Williams is an artist whose PhD research focuses on the connection between art and the environment.

Working together on the Global Challenges-funded project pushed them all out of their comfort zones. The interdisciplinary program brings researchers together to solve complex, global issues.

“We’re working outside our comfort zones, which is great, it’s very stimulating. But when you do that you need to trust the people you’re working with and the process.”

Dr Gibbs is a human geographer, whose work focuses on cultural and political relations between people and nature, especially aquatic and marine environments.

“Sometimes when we talk about arts-science, the social sciences drop out of the conversation. But social, cultural, political, economic questions are vital when we’re thinking about climate change and the Great Barrier Reef.”

Dr Gibbs hadn’t been to the Great Barrier Reef before this trip, and was struck by what she found. “The evidence of our connections with the environment was everywhere we looked. The coral bleaching beneath the surface, and the plastics—fishing ropes and transport crates, and everyday items like thongs and dishwashing liquid bottles—that are now embedded in the material of the islands.

“It was a very humbling experience.”

For her part, Dr Hamylton has spent 17 years connected to the Reef. She has seen firsthand the changes that have taken place, and the apparent lack of urgency by those in power to address the issues facing the largest living thing on Earth. She is drawn to both the beauty and the science of the area.

“The Great Barrier Reef has been fundamentally impacted by climate change. I’ve been diving it for the last twenty years, so I can see how the underwater communities have changed. Through my research, I’ve found a way to bring together some of the things I love -spatial statistics, diving, making maps – to add real, creative value through scientific insight.

“The science is there on climate change,” Dr Hamylton says. “But how can we bring about social change? What is the next step to make people care and to change the conversation?”

The history of art and the Reef

It is not the first time that the arts have been used to catalyse change on the Great Barrier Reef. In the 1970s, the specter of mining – for oil and coal – hung over the Reef, during the leadership of then-Premier of Queensland Joh Bjelke-Petersen. In response to this threat, Judith Wright, a poet and fierce conservationist, worked with ecologist Len Webb and artist John Busst to preserve the Reef. The trio’s campaign was successful, with the Federal Government intervening to protect the scientific integrity and natural beauty of the Reef and create the Great Barrier Reef Marine Park Authority.

In 2018, the UOW team set out to once again use art to make an impact. The aim was to create a collaborative work that would engage with the urgency of protecting one of the world’s most precious assets.

Dr Hamylton, Dr Gibbs and Ms Williams travelled to the Reef aboard research vessel the MV Kalinda. They spent 10 days exploring the spectacular beauty of a group of reef islands and gaining inspiration for their work.

During the trip, they mapped four reefs and islands using drone technology, took photographs on land and underwater, made drawings, worked on writing projects, and created materials that would provide the foundation of their project.

“It’s not a knowledge deficit,” Dr Hamylton says. “It’s working out how we can communicate in a meaningful manner that urges people to act. We are using the arts and sciences together to open up new ways of understanding.”

Ms Williams has visited the Great Barrier Reef as a tourist a number of times over three decades and has watched with dismay as bleached and dead coral has become more apparent with each successive visit. She was thrilled to be part of a team looking at ways of working across disciplines to address this national and global issue.

“I was very excited about the prospect of learning from scientists and geographers and seeing the Reef from their perspective. I boarded the Kalinda with a ukulele, a video camera and some drawing equipment, but I actually had no idea of how we would work together”.

On this trip, one of the catalysts for interdisciplinary collaboration that emerged was music. Halfway through the journey, along with marine geologist Dr Rafael Carvalho, they formed a band – The Blue Spotted Rays – and began to put their lyrics down on paper. The process emerged as a fun and constructive way to collaborate. It provoked endless conversations, about marine life, conservation, energy policy, climate change, politics, and, of course, who could play the tambourine.

“The process took us beyond the immediate scope of our individual experience, skills and knowledge,” Dr Hamylton recalls of their song writing experience on the boat. “It gave us the collective confidence and credibility to reach beyond our customary practices and disciplinary conventions for conveying our understanding of, or opinion about, the environment.”

The process of working together evolved over the course of the field trip.

“When you are immersed in an environment, ideas emerge from your experience of being in that place,” Ms Williams says.

Aside from the numerous “science” tasks that kept people busy each day—aerial, underwater and land-based mapping surveys—the researchers found time to take a more exploratory approach together.

“Writing and making music and having lively conversations is what sparked our imaginations and forged a fruitful working relationship,” Ms Williams says.

“Recording songs together and releasing them into the wider world has been a great way of blending our skills and knowledge, while at the same time challenging us all to push our own boundaries”.

The ongoing inspiration of the Reef

The Blue Spotted Rays returned from the Reef, but they continued to be inspired by the experience. They were accepted onto Bundanon Trust’s Artists in Residence program. On the banks of the Shoalhaven River they continued to develop their music, their maps, their writing, and their thinking about how diverse disciplinary approaches can add richness and new insight into all-too-familiar ‘real world’ problems.

“The project pushed us all to sing,” Dr Gibbs recalls, with a laugh. “We’re not all musicians! But we’ve been encouraging each other and learning from each other. And that process fosters new perspectives on our research questions.” 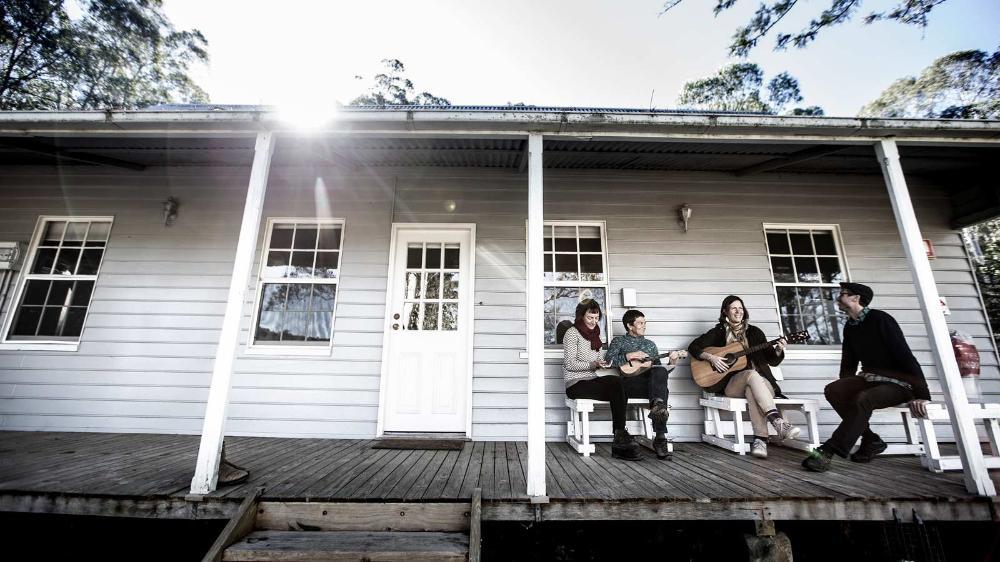 A sense of collective confidence emerged from the process of writing a song about the environmental plight of the Great Barrier Reef that would have eluded them alone. They moved beyond their individual skills and knowledge, while also extending their customary practices and methods.

Dr Hamylton says she has always been drawn to music and it proved the perfect way for this disparate team of researchers to harness their creativity and find a new platform for their message. After their time at Bundanon, The Blue Spotted Rays recorded a song: Rock The Boat.

Rock the Boat was initially inspired by the swaying motion of the Kalinda, an uncomfortable experience for some of the researchers.

“It also proved to be a handy metaphor, as we call out for people to speak up and defend our precious Great Barrier Reef from the effects of climate change,” Ms Williams says.

“For me, music provides a powerful and provocative avenue for engaging with a particular theme,” Dr Hamylton says. “I have always been impressed that doing the washing up at 11pm, when everyone else has gone to bed, can be a joyful experience when music is involved.”

How science and the arts came together

The merging of the arts and sciences brought the team together in a way they had never expected. They drew on their creative inspiration and scientific insight, bringing to life a song that is catchy, heartfelt, and draws on the folk-infused political songs of the past. It could have been torn from the 1960s counterculture of San Francisco.

So, what next for the little song that could? The Blue Spotted Rays are sending Rock The Boat out into the world, where, through radio play and podcasts, it is already connecting with the public in ways that scientific data typically do not. The vinyl is set for release in September. They plan to send a copy to Prime Minster Scott Morrison.

The band is hoping it can play a part in continuing the conversation about the need to act on climate change and the urgency of the threats facing the Reef.

“An interdisciplinary collaboration saved the Reef in the 1970s, and, now that the challenge has been scaled up, we hope to learn from that story and share insights that will allow it to be saved again,” Dr Hamylton says.

“Most people see art and science as a binary, but there is an often unacknowledged creativity in science. Creativity is the heart of the best, most useful science. It is really about thinking outside the box.”