Coral bleaching and the future of the reef.

As climate change and rising sea temperatures cause once colourful coral to turn brown and die, researchers explore what coral bleaching means for the creatures that call the reef home.

We dive over a huge dead coral stump from what I can only guess would have once been a massive table coral. Dr Marian Wong, a behavioural ecologist of fish from the University of Wollongong (UOW), points out the stump and indicates with the drag of a finger across her neck that the coral is now dead. A large majority of the once colourful corals surrounding Lizard Island, located in the far northern sector of the Great Barrier Reef, around 240 kilometres north of Cairns, has now turned a ghastly shade of brown.

Coral bleaching is a global problem that researchers all over the world are trying to mitigate. Over the last three years it has led to a widespread coral decline and habitat loss in the northern part of the Great Barrier Reef. It is in stark evidence at Lizard Island, labelled the ground zero for two mass bleaching events that have killed an estimated 29 per cent of shallow water coral reef-wide, according to findings by the Great Barrier Reef Marine Park Authority.

In December 2015, the Great Barrier Reef was exposed to above average sea surface temperatures, due to the effects of climate change. Then in the late summer of 2016 a mass coral bleaching led to another loss of shallow water coral. Winter sea surface temperatures in 2016 remained above average, and by the beginning of 2017 the accumulated heat stress on the reef resulted in a second wave of mass bleaching.

“There are still patches of colour, but so many corals are dead now with algae growing over their skeletons,” Dr Wong says, back on the water’s surface.

The sun-bronzed, self-confessed fish lover has been coming to the Australian Museum’s Lizard Island Research Station (LIRS) since 2003.Dr Wong works with a team of researchers from UOW, Southern Cross University and The University of Technology Sydney, looking at the behavioural patterns of and the effects of coral bleaching on species of anemone fish and goby fish that live within the reef’s anemones and corals.

Following along with the “Fab Four of Researchers” we locate a family of anemone fish living within a host sea anemone via the GPS coordinates from a previous trip. Two divers swim to the bottom and set up cameras to film the fish’s behaviour, while the other two divers survey the area for more sea anemones.

Back in the research station lab later that afternoon, Dr Wong explains the process while looking through the day’s video footage.

“The fish’s behavioural traits will be counted, including boldness, activity, sociability, exploration and aggression. This project will provide a better understanding of how behaviour may be modified by coral bleaching, which will help in the management and conservation of this species in the future,” she says.

I'm Dr. Marian Wong. I'm a senior lecturer at the University of Wollongong. I'm originally from the UK, now based in Wollongong, and I teach marine and freshwater biodiversity, and fisheries and aquaculture.
So we're at Lizard Island, which is an island in the Great Barrier Reef, and on this island we've got a research station that's run by the Australian Museum. And we're able to conduct all sorts of research on the reef base at that research station.
On this particular trip we are looking to monitor the recovery of coral goby populations following the bleaching in 2016, and we're also going to be observing behavior of anemone fishes, so all different species, and to try and quantify their behavior on bleached and unbleached anemones.
So the bleaching occurred in March of 2016 and there was another bleaching event in 2017, but after the 2016 bleaching event most of the Acropora corals bleached and subsequently died, so with the particular species that I work on they are almost symbiotic with the corals in which they live. So when the corals bleached those fish can remain in the coral for a while, but then when the corals die and subsequently algae grows on the coral the gobies have to move and they end up dying as well.
So a goby is a fish from the family 'gobiidae' and it's actually one of the most diverse of the fish families from around over 2,000 species. And these particular goby spend their entire lives living within the branches of corals, so all different species of corals, and there's a lot of different species of gobies that like certain corals and others are more generous and live in all sorts of different corals.
So these fish are really quite small, about two to three centimetres in length. They can't live without the coral and they rely on it as a source of shelter, food and breeding sites.
I'm Siobhan Heatwole. I'm a PhD student at the University of Wollongong and I'm studying the evolution of social behavior in anemone fishes.
I first came to Lizard Island in 2010 and I've been coming here roughly every two or three years since then.
I guess above water everything looks pretty much the same as it did in 2010 when I first came, but under the water definitely the condition of the reef has deteriorated a lot, even since I was last here in 2015, the reef was in quite good condition then, but this time it looks, yeah, there's a lot of dead coral compared to before, so it's quite upsetting really.
Well, for me, I'm interested in how fish behavior would change with changing environmental conditions. So in terms of finding out whether behaviour change with these changes that we're seeing on the reef, that's interesting I suppose.
I just love being underwater, I love diving, I love seeing all the awesome creatures underneath the sea swimming around and doing their thing. I think their behaviour is so interesting and I've just been interested in marine science since I was a kid.

Clownfish and sea anemones, and gobies and corals, are obligatory symbionts, which means that each species is highly dependent on the other for survival. Symbiosis between the two species is achieved in a variety of ways, including a mutual protection from predators, and the exchange of nutrients. The clownfish can also tolerate the anemone tentacles covered with thousands of tiny stinging capsules called nematocysts.

Across the table is Dr Anna Scott from Southern Cross University, who says the anemones, on which clownfish fish depend, are threatened by warming sea temperatures in a similar way to other corals on the reef.

“Clownfish, in turn, use the anemones as shelter to lay their eggs and raise their young. Lose sea anemones and you could say that Nemo may be left homeless.”

But clownfish are not the only reef dwellers in danger. Goby fish are also having a hard time. These inch-long, brightly coloured fish lead fascinating social lives and enjoy nothing more than removing toxic algae from coral. But as the coral bleaches and then eventually dies, the goby fish have nowhere left to live.

“With the huge death of corals around Lizard Island the effects on those fish that depend closely on coral is really worrying. Many marine animals rely on coral reefs for habitat and food. Severe coral bleaching undoubtedly has an impact on marine life like the goby fish. The big question is: ‘How long it will take for the reef to recover from ocean temperature rises?’,” Dr Wong says.

Coral bleaching is caused when the temperature of the ocean rises above normal for an extended period of time. Corals can put up with high temperature for a short amount of time, but if they are exposed to too high temperatures for too long, they bleach and that means they lose or eject their symbiotic algae called zooxanthellae. This algae give the coral nutrients.

Once corals bleach they begin to starve. While some corals are able to feed themselves, most corals struggle to survive without their zooxanthellae and if the stress persists on the already bleached corals, they often die.

After corals die, turfing algae rapidly invades the space left free by the dead corals. The loss of these corals resulting from the bleaching then affects the new reef-building corals. It’s these new coral constructions that serve as a nursery and shelter for dozens of fish species.

Current trends in ocean temperature – and future predictions – suggest coral bleaching could occur each year within the coming decades. Some reefs around the world have experienced consecutive years of bleaching, with barely any opportunity for colonies, let alone reefs, to recover. 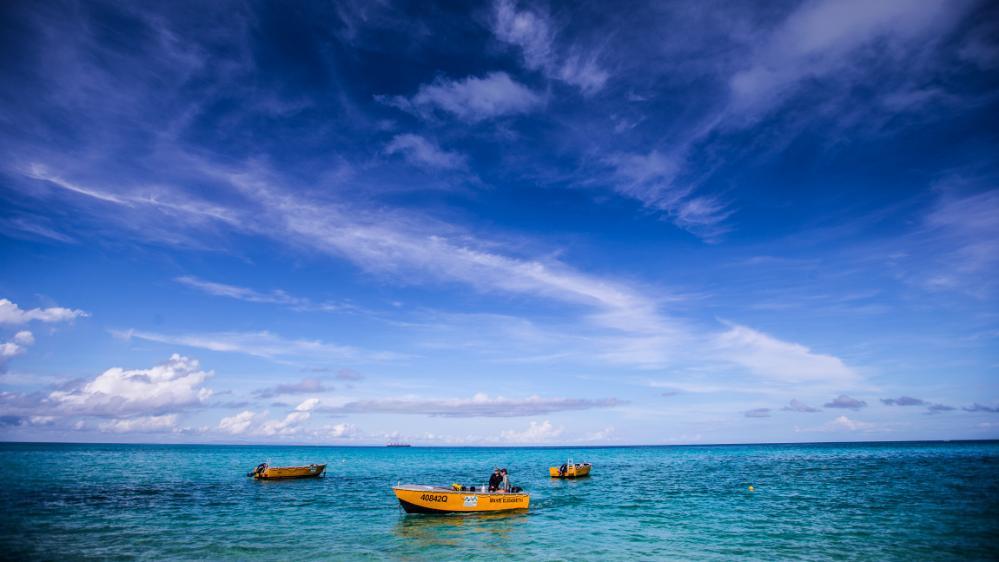 Dr Lyle Vail, director of the Lizard Island Research Station, said the majority of the flat reef surrounding the island has been hammered by warming temperatures and cyclones over the past three years.

“The category four cyclones Ita and Nathan in 2014 and 2015 stripped out all but the most robust corals. But it was nothing compared to the extensive coral bleaching in 2016,” Dr Vail says.

The area most severely affected by the cyclones and the bleaching event was the formerly pristine northern third of the Great Barrier Reef. An average of 67 per cent of shallow-water corals died, according to a large-scale survey by the ARC Centre of Excellence for Coral Reef Studies.

“In summer a lot of that hot water on top of the reef is just staying there and cooking the coral,” Dr Vail explains.

Ocean warming threatens the structure and function of coral reefs worldwide. There is no longer any doubt about the impacts of global warming in relation to our reefs. The cause of coral bleaching is well known to scientists. Now researchers are looking at new studies that deal with its effects on the structure of communities of hundreds of species of reef-colonizing fish.

UOW PhD student Siobhan Heatwole, who is studying the social behaviour of habitat in reef fish, is taking a deeper look at the behaviours of anemone fish.

“I’m especially interested in clownfish and whether they show any behavioural traits in relation to their changing environment,” says the young biologist, who has been visiting Lizard Island for the past eight years.

The most significant impacts of climate change on clownfish are those affecting their coral reef habitat, water temperature and chemistry.

“One of the key behaviours we are looking at is the measurement of boldness and shyness. And are clownfish more fearless on bleached coral reefs.”

Dr Marian Wong says it is highly unlikely that reefs will be granted enough respite to get the decades they need to recover. In fact, the frequency of bleaching events is forecast to increase.

“The reef may never be the same ever again, we may have a reef but it’s not going to be like the one I remember,” she says. 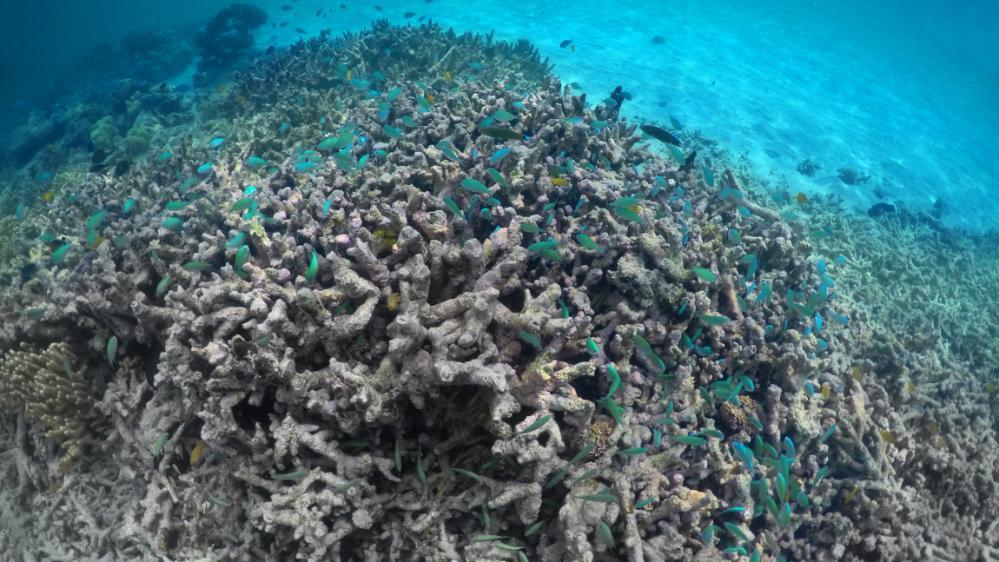