The search for answers to epic questions.

Category
Arts and CultureScience and Technology

There are pages missing from the Australian history books. Pages that Distinguished Professor Richard ‘Bert’ Roberts hopes to fill with answers to some of the most fundamental questions about our continent and its inhabitants.

When and how did people arrive in Australia? What have been the major changes in our climate? How did the landscapes, plants and animals respond to altered conditions?

These are all interesting questions, but – besides fulfilling our inherent curiosity – what benefit or value comes from answering them?

Professor Roberts says it goes beyond the need to simply find a missing piece to a puzzle. He firmly believes that answering these questions about our past will lead to a better future.

“To adapt successfully to future challenges, we must dramatically improve our understanding of Australia’s past,” Professor Roberts says. “History governs where we are now and our immediate trajectory.

“By filling these vast gulfs in our knowledge, we will be better able to predict environmental changes and the knock-on effects for biodiversity and Indigenous heritage. We will be better placed to protect our precious national assets.”

Headquartered at UOW and led by Professor Roberts, the Australian Research Council Centre of Excellence for Australian Biodiversity and Heritage (CABAH) is starting to discover more about our continent’s rich history.

CABAH brings together researchers from science, technology, engineering and mathematics with scholars from the humanities, arts and social sciences.

Professor Roberts says new insights from these disciplines will transform our knowledge of past environments and human activities in Australia and the neighbouring regions to our north.

“Creating an environment in which researchers from very different disciplines can collaborate revolutionises the way we investigate the processes that shaped this continent and the story of its people,” he says.

I used to be of the opinion that history doesn't matter. I say history does matter because it governs a lot of where we are now and our immediate trajectory going forward.
Every new generation that comes along sees a new baseline. Trying to get people to change their behavior is very hard when they can see that there's been almost no change in their lifetime, but over several lifetimes a lot has changed.
Let's try to get people to sort of think differently.
I do think we are getting to a tipping point, where people need to reimagine what the world could be like going forward. You know, we can't continue along that train for the next 200 years, 300 years.
There are plenty of old climate deniers in the world because it suits their political agenda and they built up wealth. The young people haven't got that luxury of sitting back. I mean, after all, the students now are going to inherit the earth that we leave them and they realise it's not, it's not going well. So yeah, people do come through with much more of an open attitude to what can we do to, you know, help the planet.
I think the strength of Wollongong is it picks what it's going to be really good at and so that's where we're gonna put our money. You get a leg up because you can actually make things happen very fast.
People I think get the idea when they come here that, you know, they can really, they can make a difference because they can think they can make a change quickly and they can make a change efficiently, and they can make something happen.
To all incoming graduates, you know, as a university student, your responsibility is to your community and to the world at large. We've got to be community-minded going forward to save the planet I think.

Professor Roberts, an Australian Laureate Fellow with the Australian Research Council, has spent much of his career investigating turning points in human evolution and dispersal.

He has been at the forefront of pioneering research in geochronology and built the optically stimulated luminescence (OSL) dating laboratory at UOW into one of the most research-active in the world. OSL dating is used to determine the time since naturally occurring minerals were last exposed to light. This gives researchers a more accurate timeline for artefacts, fossils or other evidence of past climates buried in the sediments.

“Accurate dating of key events in Earth’s history is fundamental to provide an historical framework,” he says. “OSL dating has created new opportunities to investigate human interactions with their environments.”

Luminescence dating has had a major impact on our understanding of human settlement and migration patterns, by providing a reliable timeline for important archaeological and palaeoanthropological discoveries.

Professor Roberts led the dating of the cave deposits on the island of Flores, Indonesia, where the skeleton of a new species of human, Homo floresiensis – nicknamed The Hobbit – was discovered in 2003.

He has also applied single-grain OSL techniques to piece together the timing and routes of humans across South Asia and contributed key data to debates on megafaunal extinction events in Australia. 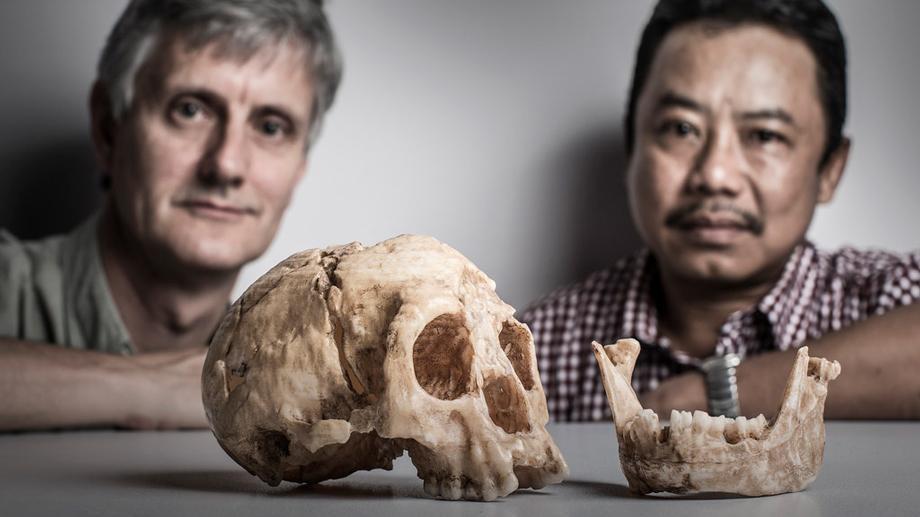 Leaving the world to the next generation

On top of searching for answers to Australia’s past, CABAH is encouraging young scientists of the future through education and outreach programs at Australian schools and museums.

“Our groundbreaking research discoveries will be taken into Australian school curricula and shared with the wider community through these exciting programs,” Professor Roberts says.

And it seems the next generation already understand our future challenges with Professor Roberts seeing a change in the attitudes of his current students and young researchers.

“Students now are going to inherit the earth that we leave them and they realise it’s not going well,” Professor Roberts says. “People do come through with a much more open attitude to how they can help the planet.

“I do think we are getting to a tipping point where people need to reimagine what the world can be like going forward. We can’t continue along this train for the next 200 years. As a university student, your responsibility is to your community and to the world at large – we’ve got to be community-minded going forward to save the planet.”

Professor Roberts says Australia’s cultural heritage, landscapes and biodiversity are under threat. If we are to build a more sustainable future and more fairly manage our finite resources, we urgently need to understand our environmental history and Indigenous heritage.

“If we can fill the missing pages of the past, there’s every chance we can influence the upcoming chapters of our epic story.”