Putting science education under the microscope

How Dr Walt Carroll went from researcher, to public servant, to one of TikTok’s biggest science stars

It’s not unusual for Walt Carroll to drive 90 minutes to Wollongong’s rock pools, collecting samples to take back for microscopic analysis at his home in Goulburn.

“I was planning to do the trip again about a week later and return the sample because I thought it would be mostly seaweed and a few microorganisms. But I saw so much life when I looked at it that day, I knew I had to put it back as soon as possible, so I drove back the next day to return the critters back to their home. I wouldn’t be able to sleep after seeing the incredible amount of life, all in a few milliliters of ocean water.”

It’s this dedication that has seen Walt become a global TikTok phenomenon, reaching millions of people in under a year.

Walt’s passion for science and research is what took him to a Bachelor of Medicinal Chemistry (Honours) at the University of Wollongong (UOW).

“I really didn’t know what jobs would be available, I just knew medicinal chemistry was flexible. I had a lot of friends using their degree as a stepping stone to go into things like pharmacy, medicine, and surgery. Doing my Honours year gave me a taste of the research life,” he says.

With first-class Honours came four more years of research, with Walt completing his PhD in 2018 where he found a passion for sharing his love for science with students.

“I was signing up for everything. I was teaching first and second year, sometimes even third year subjects and demonstrations. It was just an absolute delight, one of the best experiences I had,” he says.

That passion for sharing his scientific knowledge has seen him become an online sensation through his TikTok account, OneMinMicro.

From one minute to one million

Walt had acquired a microscope at university and decided to film what he saw through the lens. He started a YouTube channel and called it One Minute Micro, but it never took off. Then in early 2021, his sisters introduced him to TikTok.

“The want to do that kind of thing had been there for quite a while, even probably when I started university, I just didn't have the software or the knowhow to stitch videos together and do a bit of a voiceover. TikTok had straightforward in-house editing, so I thought ‘maybe I’ll give this whole video thing another crack,’” he says.

It started as a hobby outside of his nine-to-five job at IP Australia. He uploaded one video every day, filming different samples under the microscope. As he got introduced to other microscopic science content, he discovered a video which showed microplastics in processed food.

Then, one of his viewers asked to see the inside of a cigarette.

“I thought it would be interesting to look at the components inside, so I uploaded the video and within about a minute it had 4,000 views. Then I realised I had just put music over the top [and no voiceover] and I couldn’t consciously keep it up without explaining the context of what was shown, because I knew there were some young ages using the app,” he says.

“I deleted the video and reuploaded it with a voiceover explaining that cigarettes contain some pretty toxic chemicals. When I woke up the next morning, it had over half a million views.”

Walt has since uploaded hundreds of educational videos, analysing everything from toothbrushes to toilet water, amassing a global fanbase of more than 1.5 million followers and almost 30 million likes. He has collaborated on social media with the World Health Organization and partnered with brands to create sponsored content, proving that science really is for everyone.

“The audience is very general, but I think of all my followers as mini-scientists, or people that want to know more about the world around them. I have kids as young as five (through their parents) asking me to look at puddle water. When I video reply to those comments, they are some of the best performing videos,” he says.

“I also know there are some school teachers using the material in class. I had a teacher reach out to me and ask if I could look at a frog under the microscope, as she was showing the videos to her class as a reward at the end of the day.” 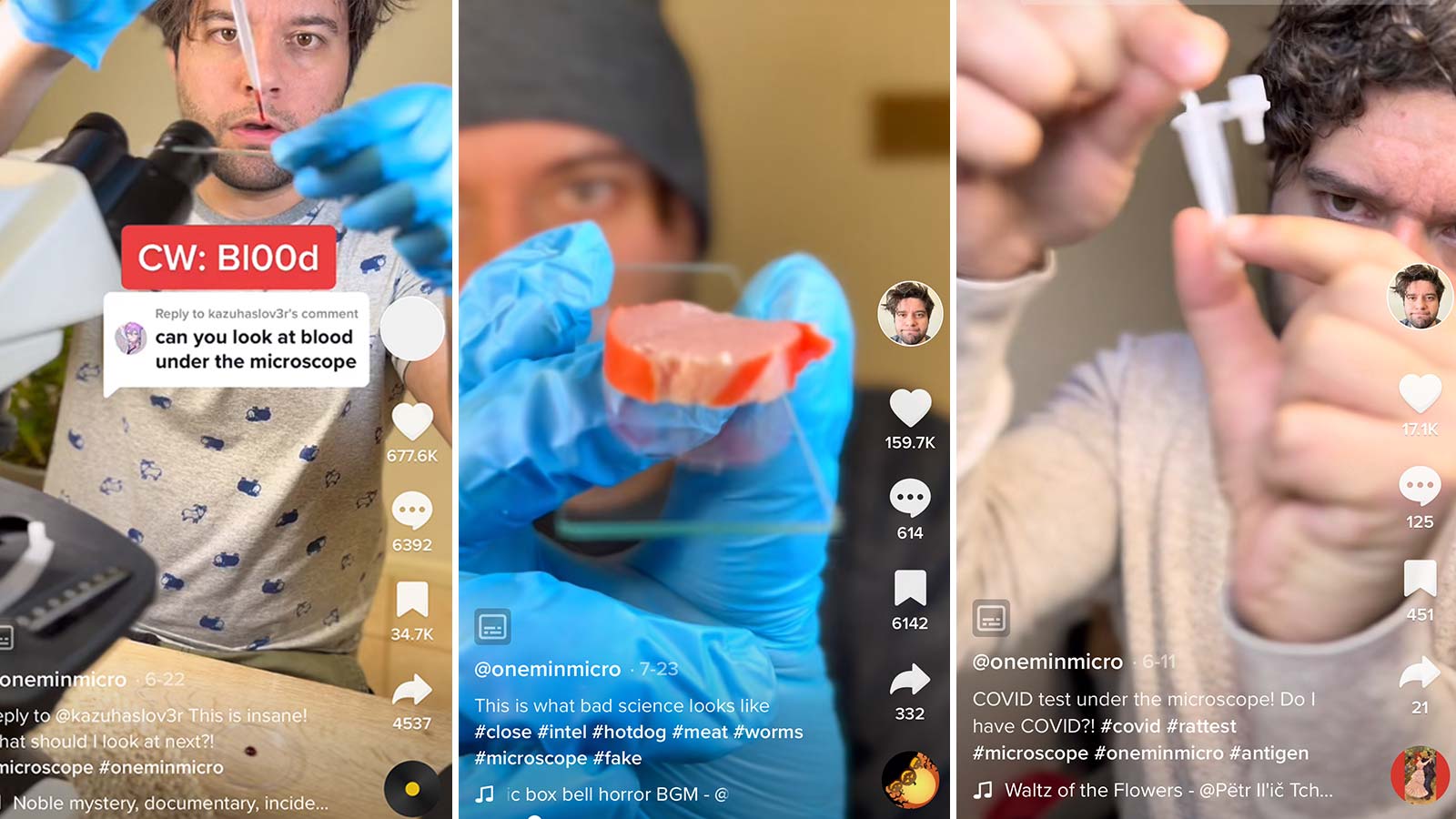 Walt says the constant interaction with his followers reminds him of why he started the channel in the first place: to make sure that everyone can learn about the world around them.

“One of the underlying reasons for the channel was to just showcase science, particularly to the younger generations that are coming up now. I want to see the creation of more science jobs out there, and I think engaging and showing its relevance is really important,” he explains.

He says his time teaching during his PhD cemented his love for sharing his knowledge and reminded him that not everyone learns in the same way.

“I’m a visual learner. There were times [teaching at UOW] where I'd have to think up a creative analogy, without being condescending, to convey a scientific concept, for those like me who need a little bit more or maybe a different visual,” says Walt.

“I recognised that I am able to take maybe a really complex subject and break it down into simple components, and the simplest videos seem to do the best. It also helps me learn things as well, so I'm learning at the same time as my audience.”

And while the pressure of a global following, sponsorship deals and being on TikTok Australia’s radar could get to some, Walt says producing his videos is still as fun as when he first began.

“My huge interest is microscope stuff. I don’t see it as a job, it’s just a hobby that I absolutely love and I’m able to share with the rest of the world. Although it can be time consuming, I always feel recharged.”