More than fun and games

Ashleigh and Grant Neill met while balancing education degrees and jobs at a South Coast theme park. Seventeen years later, the husband and wife have built an acclaimed business that is raising the bar for children’s care—while they raise their own family in the process.

For Ashleigh and Grant Neill, success is simply a matter of saying yes.

It’s a mantra that has seen the pair through thirteen years of marriage and the birth of two children, but also what led them to co-found Peak Sports Learning, a before and after-school care service that is changing the way the industry tackles childhood obesity.

Ash and Grant met while both  working at Jamberoo Action Park, a large employer of uni students in the region.

While Grant initially studied property economics, and Ash was accepted into nursing, they each discovered their passion for education through UOW teaching degrees, while navigating a teetering balance of work, studies and social life. “We had fun on the weekends working together, then at university you would see each other walking around,” says Grant of the time. “It was a fun place to work, but it connected us at university too.”

Listen to the full interview with Ashleigh and Grant.

By O-Week, the pair admitted there might be feelings involved.

“I would see Ash from afar and thought she’s out of my reach, so I didn’t think to try at first,” laughs Grant.

“I always had an inkling that was going to be something more for sure,” Ash responds.

The pair synchronised their schedules so they could commute, spend class time, study and party together as much as possible.

It was during this time at UOW that Grant took an interest in something that would ultimately catalyze he and Ashleigh’s future business: childhood obesity.

Grant’s interest in the causes of childhood obesity became his primary research subject. His advanced studies hinged on a seemingly simple observation: that the way a child spends their afternoon could have a lifelong impact on their overall health.

“For a lot of kids from dual-income families, their parents aren’t that excited about having them running around unsupervised; staying in and watching TV is the safer option,” he says. “I had completed a study on how not having access to physical activity in an afternoon was directly linked to childhood obesity. That’s where the business idea came from; ‘why can’t we get children moving in an afternoon?’ I chatted to Ash about it, and we were all on the same wavelength that this could be something fun to be a part of.”

The duo pitched the idea to John Good, a close friend who had previously worked both in teaching and for the NRL. With his endorsement and valuable input, the business was born.

While initially envisaged as a passion project and a chance at secondary work, Peak Sports Learning was founded (with business partner John Good) as a way to apply their skills in a more flexible environment.

“There was never an inkling that it would become what it is now,” Ashleigh says, describing a typical day early on as waking up at 6AM to run before-school care, before going on to a full time teaching role, running after-school care, and then running the business at night.

“We were accustomed to hard work, but it was our little project and our baby so it didn't feel like work. And it still doesn’t.”

Now, Peak Learning caters for over 800 kids in 21 centres with over 200 staff. They are one of the largest employers of university students in the Illawarra, who the pair refer to as ‘young, enthusiastic, and always enjoyable to be around.’ It’s good for the students too, who get a chance to test their studies in the field before going into full-time employment.

This might all sound like fun and games (and for the kids it is), but Peak Learning’s success is the result of meticulous research, evidence-based programming, and results-driven refinement.

It started with a mission to build the foundations of a lifelong interest in physical activity. Now, Peak Learning fosters a more rounded experience that incorporates reading time, mindfulness exercises, and physical games that side-step the anxiety of competitive sports in what’s referred to academically as ‘game-sense learning’.

"It’s our philosophy to not have TVs or video games. What we do have is really good staff who model really good behaviours and teamwork skills. The children develop friendships with those staff and see them as positive influences in their lives. The staff become part of what the children engage with and part of what they learn about. That’s a real bonus.”

And finally, it’s backed by a rock-solid understanding between two co-founders who bring their own skills (and seventeen years of partnership) into the equation.

“Grant is a people person, and that’s really helpful for some of the harder parts of running a business,” says Ash, who focuses on developing programs and liaising with their broader teams. “I could never do what he does. He’s always pushing us to do more active and fun things that I’d never even consider.”

“Ash is the kind of person who puts everyone before herself,” responds Grant, who focuses on the overarching strategy, expansion and administration of the business. “She likes to make sure everyone is happy. Sometimes I can be the ‘let’s get it done’ person, where she’s more happy to relax, which is good for both of us.” 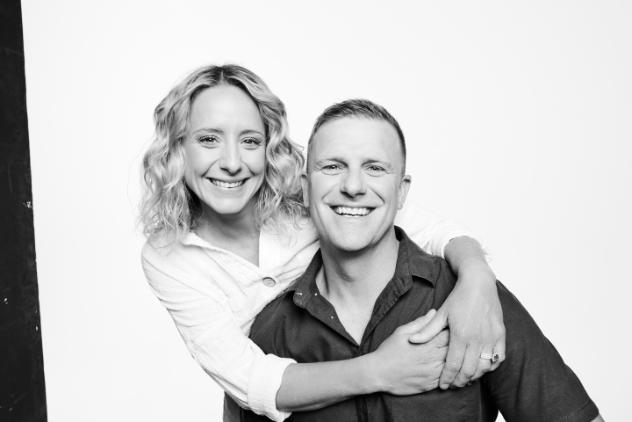 Lef to right: Ashleigh and Grant
Though enrolments mark business success, studies conducted by UOW have quantified the impact the program has on children's overall health. "The data from UOW says kids in our centres have higher heart rates, that they are moving more, that the menu options are healthier…” says Grant, noting that the pair are regularly asked to contribute to industry panels and show their findings. “Enrolment is one measurable, but having researchers come in and say that we're achieving our goals, as well as ways we can improve, is even better."

Despite the challenges of COVID, which saw  their student intake drop  to a tenth of its pre-COVID levels, Ashleigh and Grant have persevered through a mixture of determination, open communication and willingness to try new things. Both of them attribute these qualities to time they spent in and out of the classroom at uni.

“Being at uni helps you build social skills and establish relationships. You have to get out of your comfort zone and meet new people, and if you do that you have a far more enjoyable experience,” says Grant.

“No business owner knows everything, it’s impossible. But with those social skills I can pick up the phone and ask for help. You learn that through meeting different people: lecturers, tutors, everyone interacting in different ways, You get a different perspective on life.”

But the true key to their success comes back to that simple mantra….of almost always saying yes.

“During university we were very much ‘Yes’ people.” says Grant. ‘Do you want to play a lunchtime sport?’ Yes. ‘Should we hit the pub after class?’ Yep, let’s do that. ‘Do you want to go to that party?’ Of course. We didn’t say no to much at all, and today it’s much the same. We see an opportunity and ‘yes,’ we’re there.”

“If someone was thinking about going to university, I’d say just take those opportunities and say yes to everything. Really involve yourself in the culture. Get to know the campus and who you’re studying with. And if someone says ‘do you want to come along?’ just go with it. You’ll enjoy yourself, and your long term life will probably be better for it.”