People often talk about making life-long friends at uni as if these meetings were mere strokes of luck. But these formative years of your life always forge unusually strong bonds of friendship. Barron Hanson and Michael Appleford’s 16-year friendship is a testament to that.

Born and raised on the south coast of NSW, Barron and Michael (‘Apples’) initially crossed paths in their early-teens as “two of the smaller kids” on the same AFL side, before both unknowingly enrolling at UOW.

Drawn by the extra UAI points offered to prospective students from the local area, it wasn’t until the pair arrived on campus that they realised it was an experience they should take advantage of. “I’d moved out of home at 17 and was a little lost after high school '' says Michael, who enrolled in computer science before changing to communications. “Once I started uni, I realised that high school wasn't really the end of things, but the start. You realise that life is yours for the taking and you can do what you want." It was a feeling shared by Barron, who had just spent a gap year travelling before deciding to come back and live in student accommodation. “Coming back to Wollongong was like grounding myself. It was like ‘this is exactly where I need to be right now’,’' he says.

Listen to the full interview with Barron and Michael

“Landing on campus and meeting a new bunch of friends and starting adult life, it felt like the right time and the right place. Everything was new and fun and exciting."

Barron was recruiting for the UOW Snowsports Club when he noticed his old footy teammate walking around the duckpond lawn. Before long he’d convinced Michael to sign up, and the rest was history. "In those formative years when you're just out of high school you're becoming your adult-self and finding your crew, the Snowsports Club was what brought us all together initially. Then we started travelling internationally and that really brought us together,” says Barron.

After a trip to Queenstown, Barron says the Snowsports Club represented the broader UOW experience: it’s as much about what you sign up for as anything else. “Going away with people, socialising, snowboarding and all the other things in-between - you really become quite close. That’s turned into our adult friendships too."

Fast forward a few years: Barron and Michael both graduated before moving to Sydney. With Michael scoring a “dream” graduate job in marketing for the NRL, and Barron running snowboard tours for a travel agency, they both emphasised the importance of having a friend to navigate a brave new world with. “We were both discovering the city for the first time,” says Barron. “I think that was really important; having someone there who's going through a similar experience to you."

But as the thrill of one city waned over time, Barron went in search of a fresh adventure— leading him to fulfil a lifelong goal of moving to New York City. "I ended up there without much of a plan other than to go and see what happened,” he says, describing the difficult first few months that any expat will experience before finding their own crew—something that Michael was sensing remotely back home.

“For the first two or three months we would chat every single day, and I could tell he was struggling,” says Michael. “He’d gone over looking for something and I don’t think he found it right away.” Michael even arranged to go over and surprise Barron. "I knew he was struggling with loneliness at the time. So I organised for his girlfriend to take him out to dinner where I'd be waiting at the table instead.” Barron described the surprise as “the furthest anyone could travel for you.”

While Barron soon thrived in New York, opening a creative production firm with a group of Australians (called Convicts), the impact on Michael back home got lost in the rush.

“I probably found [those initial few months] tougher than Barron did, because I’d convinced myself that I had been left behind,” Michael says, noting that this was an internal narrative rather than a real one. “But the best friendships will be supportive and appreciative rather than resentful, and I've since been stoked to see him grow and achieve his goals and develop. That's where I think we both developed into becoming adults, moving forward on our journeys.”

“Of course, our lives change and we go through ups and downs together, but the strength of that friendship, having gone to uni together, there was a baseline that would always be there,” adds Barron. 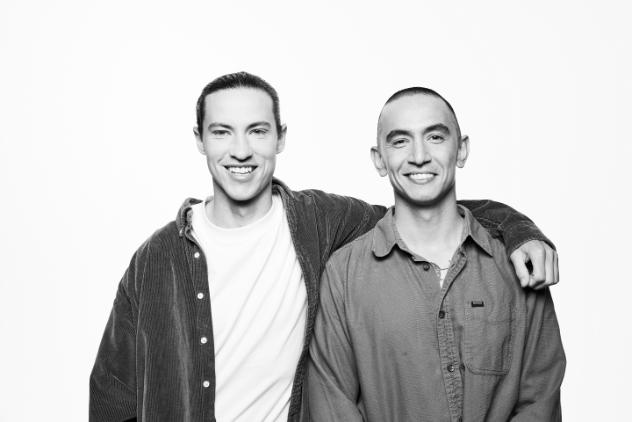 After seven years in New York, Barron has just returned home to open an Australian Convicts office, right around the time that Michael and his partner Tess opened their own marketing and design agency Salt + Kin Studio. Like the pair of friends, these two businesses share similarities and unique differences.

"The mission statement for Convicts is ‘Troublemakers for a better world’,” says Barron, now boasting 20 staff across three offices. “We create documentaries, short films, advertisements and events. But with every piece of content we make we’re asking ‘how does this make the world a better place, and how is it different to what anyone else would have done?’”

With Salt + Kin Studio, Michael and his partner Tess focus on connecting brands to audiences through graphic and web design as well as digital marketing. He notes that while Convicts’ work is larger in scope, they both share an ambition of designing a more creative and sustainable future for everyone. It’s here that their friendship—set up over 16 years—finds its current iteration.

“It’s been awesome watching Apples start his business and reconnect on that level, sharing the growing pains and talking them through,” says Barron. “It really deepened our friendship at both an adult and professional level.”

Looking back at over a decade of friendship, Barron and Michael both attribute the other as a vital influence at every junction. It’s that rare friendship that doubles as a support system for the pressures of the time: whether that’s on the slopes of Queenstown, a diner in New York City, or back home on the south coast. It’s a perfect case study of the education you get outside of the classroom, and the idea that you really get out of uni what you’re willing to put into it.

“If you think about the iterations, there was the teenage version of our friendship, then the uni version, then our early professional lives, and now us as business owners,” says Barron. “It’s cool to connect on all those different levels throughout time. When you consider what I learnt and what I most cherish from UOW, it was those friendships…that time you spend at the Unibar, on the snowfields, the socialising and all the things that come between your academic life that’s been so important. That’s the value of our friendship that is still paying dividends ten years later.”