The race to save the corroboree frog

As bushfires raced through Kosciuszko National Park in January, researchers from the University of Wollongong watched in horror. Only weeks before, they had dropped more than 100 precious corroboree frogs into the area as part of their species recovery program.

Just before Christmas last year, 115 corroboree frogs were helicoptered into Kosciuszko National Park, where they were delicately and individually introduced into custom-built enclosures.

Laboratory-reared at the University of Wollongong (UOW), the frogs had been afforded premium care that included a performance-enhancing diet as part of a breeding program to save their dwindling numbers from extinction.

So, just weeks later it seemed unthinkable that they, like many species in the surrounding communities, faced total devastation as fierce bushfires bore down on their fledgling colony.

"When the fires flared, we immediately discussed the possibility of racing in to recover the colony but it was too late because we weren't allowed access," says Professor Byrne.

"All we could do was hope, but with access to the Rural Fire Service 'Fires Near Me' app, that hope faded as we watched with heavy hearts as two fire fronts converged on the frogs' release site." 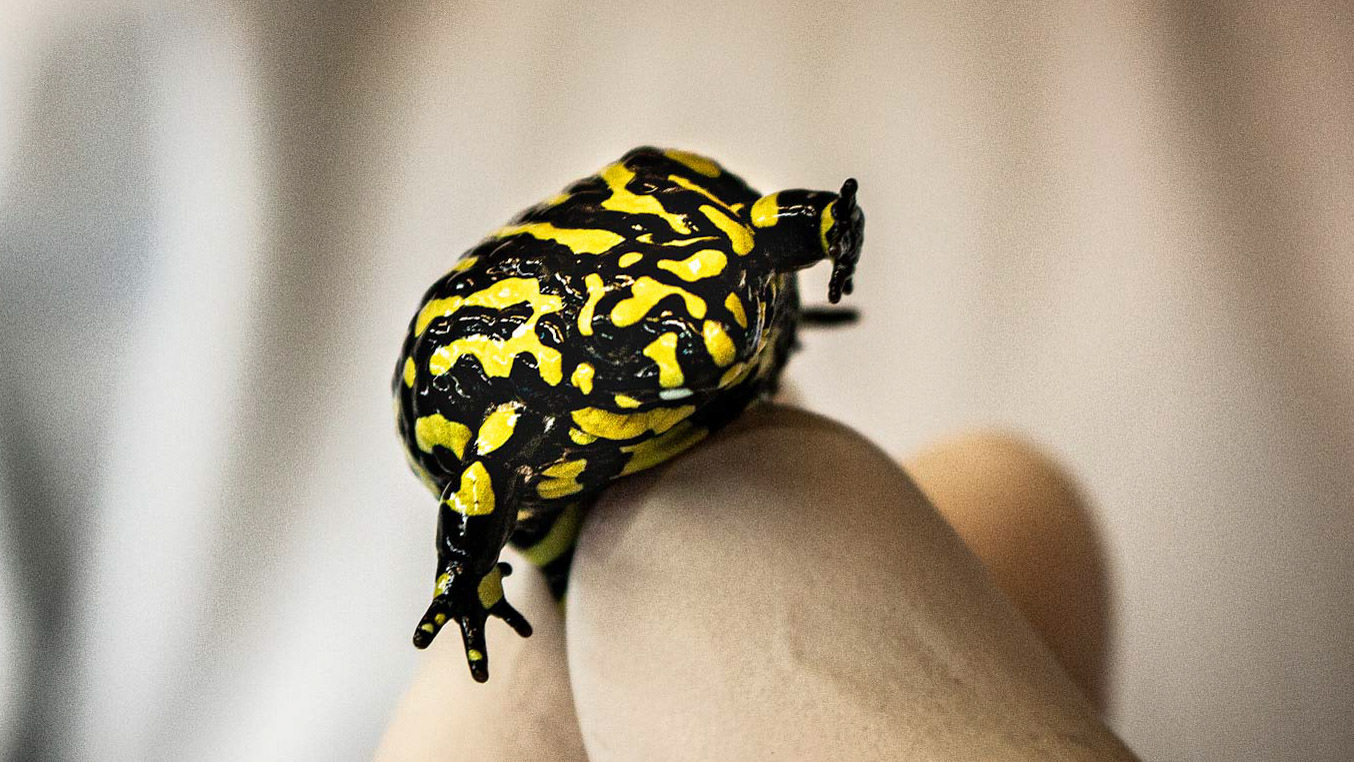 A corroboree frog in the lab at UOW. Photo: Paul Jones

Dr Silla agrees that despair descended on the entire team.

"We were all glued to our phones and laptops, and given the chance, any one of us would have jumped in to evacuate the frogs."

Miraculously though, once Dr David Hunter from the NSW Department of Planning Industry and Environment (DPIE) and Taronga Zoo's Michael McFadden were helicoptered in by members of the Australian Defence Force, they found 40 of the 115 frogs had survived.

Considered one of the most visually spectacular frogs in the world with their black and yellow colouring and striped patterning, the corroboree frog (both southern and northern species) are among Australia's most endangered vertebrates. 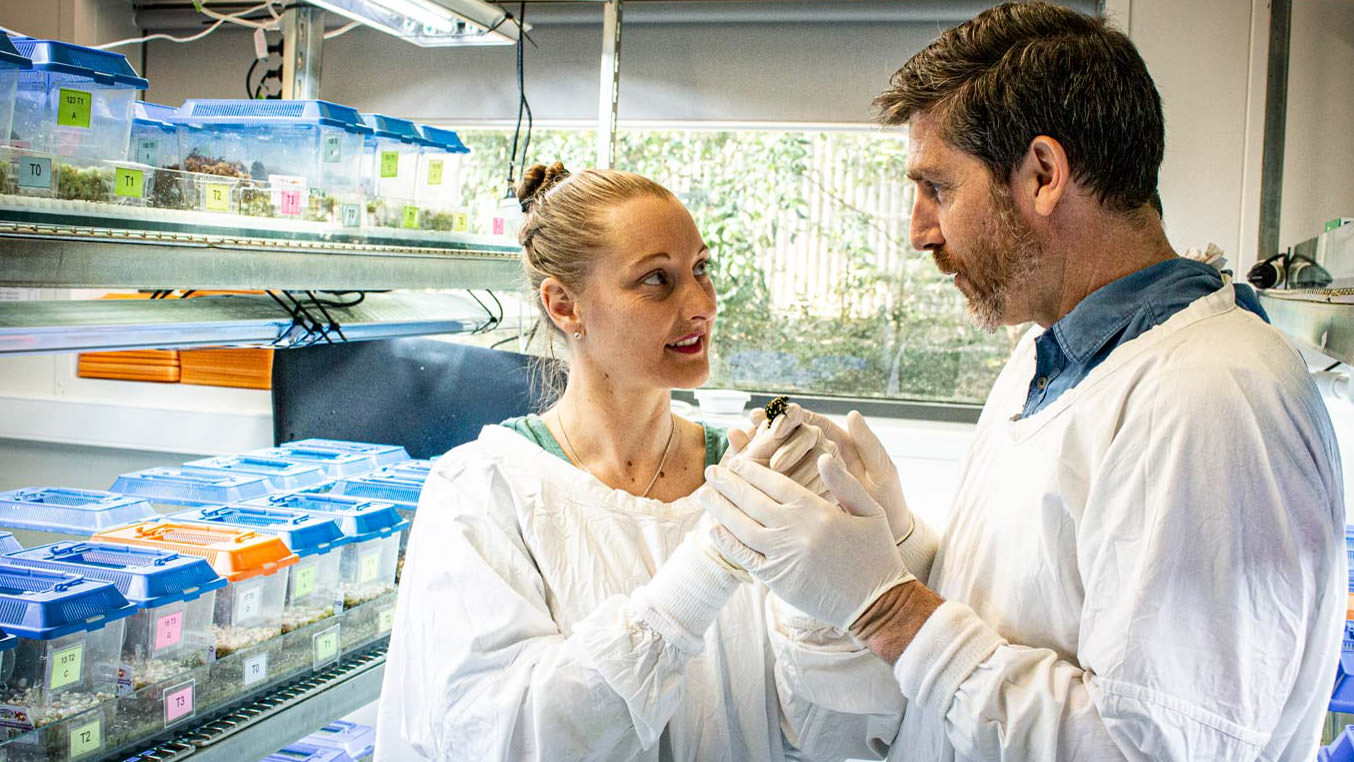 Dr Aimee Silla and Associate Professor Phil Byrne in the lab with a frog.

They are found in sphagnum bogs, wet heath and sub-alpine woodland under leaf litter, logs and bogs in south-eastern NSW and the ACT.

Before the recent release into the national park, close to a historic breeding ground, it was estimated there were only about 50 southern corroboree frogs left in the wild. Numbers for northern Corroboree frogs remain marginally higher.

The frogs have few predators because when threatened they exude toxins from glands that make them distasteful and even deadly to animals who eat them.

The primary cause of the species' decline that started in the 1980s is chytridiomycosis, a virulent skin disease caused by the amphibian chytrid fungus, which has resulted in the disappearance of hundreds of amphibian species worldwide.

Climate change is also a major threat with increases in temperatures and the intensity and frequency of drought, which negatively affects breeding sites and opportunities for reproduction. 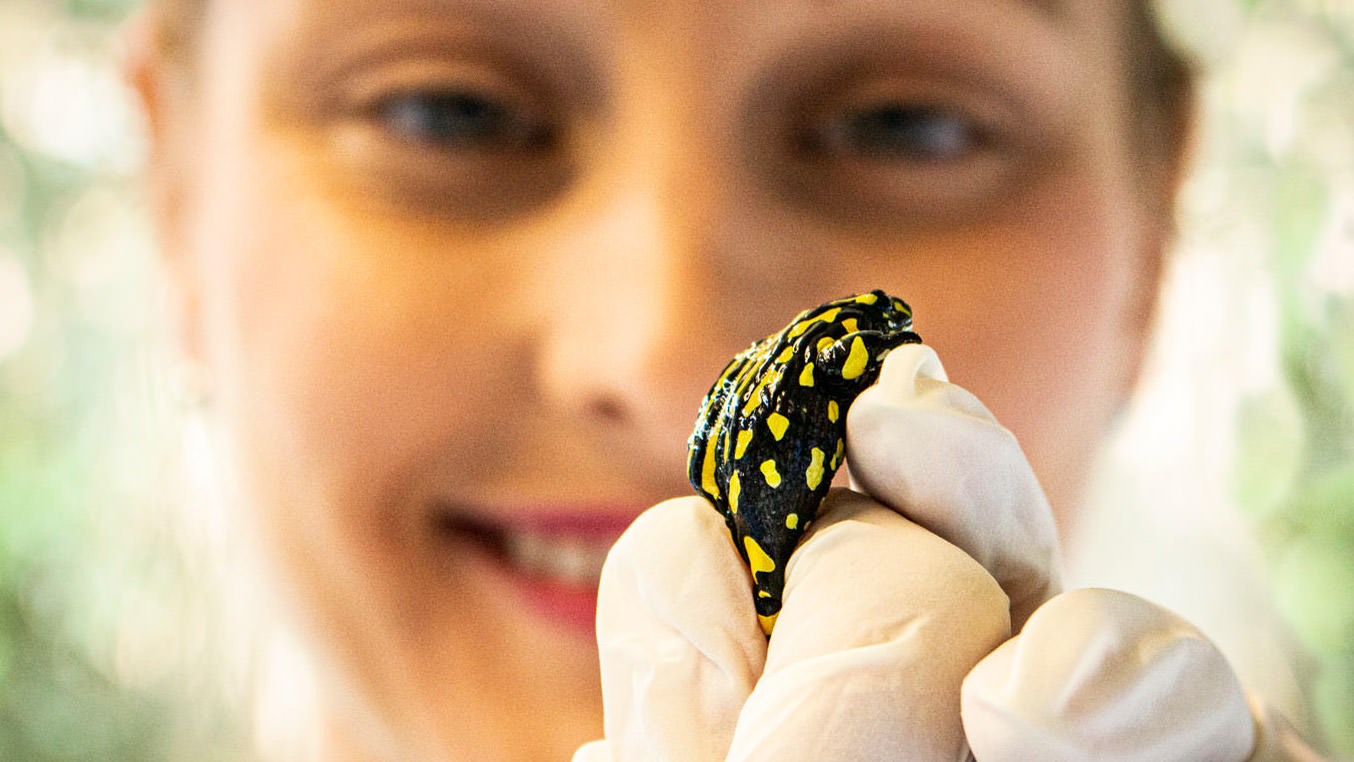 The news that about a third of the colony released in the Alpine region had survived was joyously received by the researchers and it gave evolutionary biologist, Professor Byrne, and reproduction biologist, Dr Silla, new research avenues to explore.

To put the survival story into perspective, intense bushfires are known to reach heats of up to 800 degrees Celsius, hot enough to melt metal.

Professor Ross Bradstock, Director of UOW's Centre for Environmental Risk Management of Bushfires says the heat pulse alone experienced during an intense bushfire can be lethal for most organisms.

"But a thick layer of soil or bark as small as two centimetres is enough to protect most animals if they can shelter in burrows, under rocks or in hollows," he says. 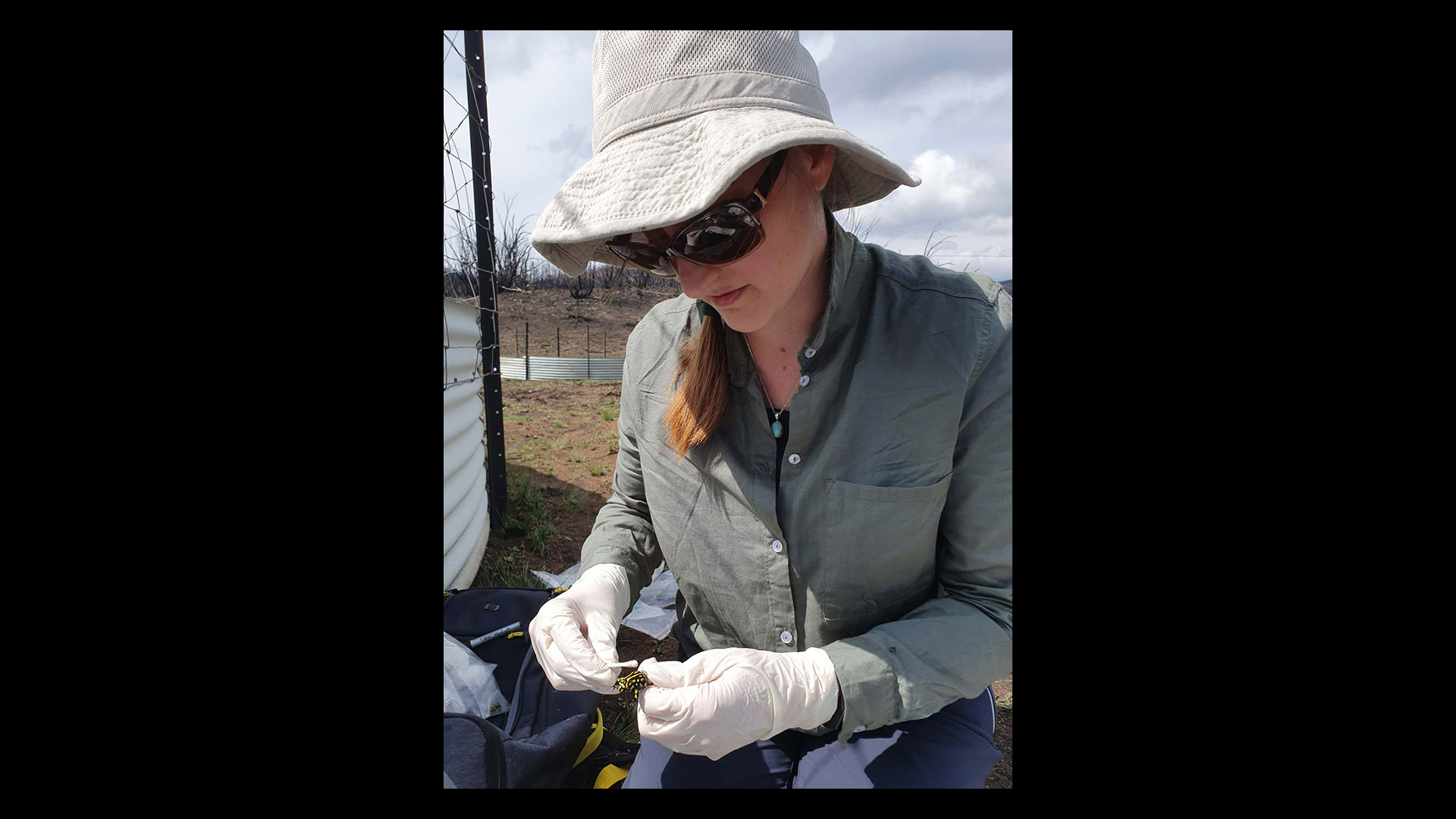 Dr Aimee Silla with one of the frog survivors from the January bushfires in Kosciuszko National Park. Photo: Supplied

Professor Byrne acknowledges that various Australian species have adaptations that allow them to resist and recover in the face of a fire challenge, but very little is known about how frogs respond to fire or smoke.

"The frogs who survived, were huddled together about 10 to 30 centimetres underground in moist refuges in the enclosures and that was enough for them to escape the full force of the two fire fronts," he says.

"Their burrowing behaviour is likely to be an adaptation to help them survive fire, having evolved through the process of natural selection, one of Charles Darwin's great theories.

"Frogs who respond to fire by seeking refuge are more likely to survive and reproduce, and pass on genes controlling this beneficial behaviour to their offspring."

Remarkably, the majority of the corroborree frog survivors were in good condition with only two or three displaying burn scars.

It is expected the UOW team and their partners, who include DPIE, Taronga Conservation Society Australia, Deakin University and Zoos Victoria, will ensure valuable lessons learned from the disaster are incorporated into future recovery plans. 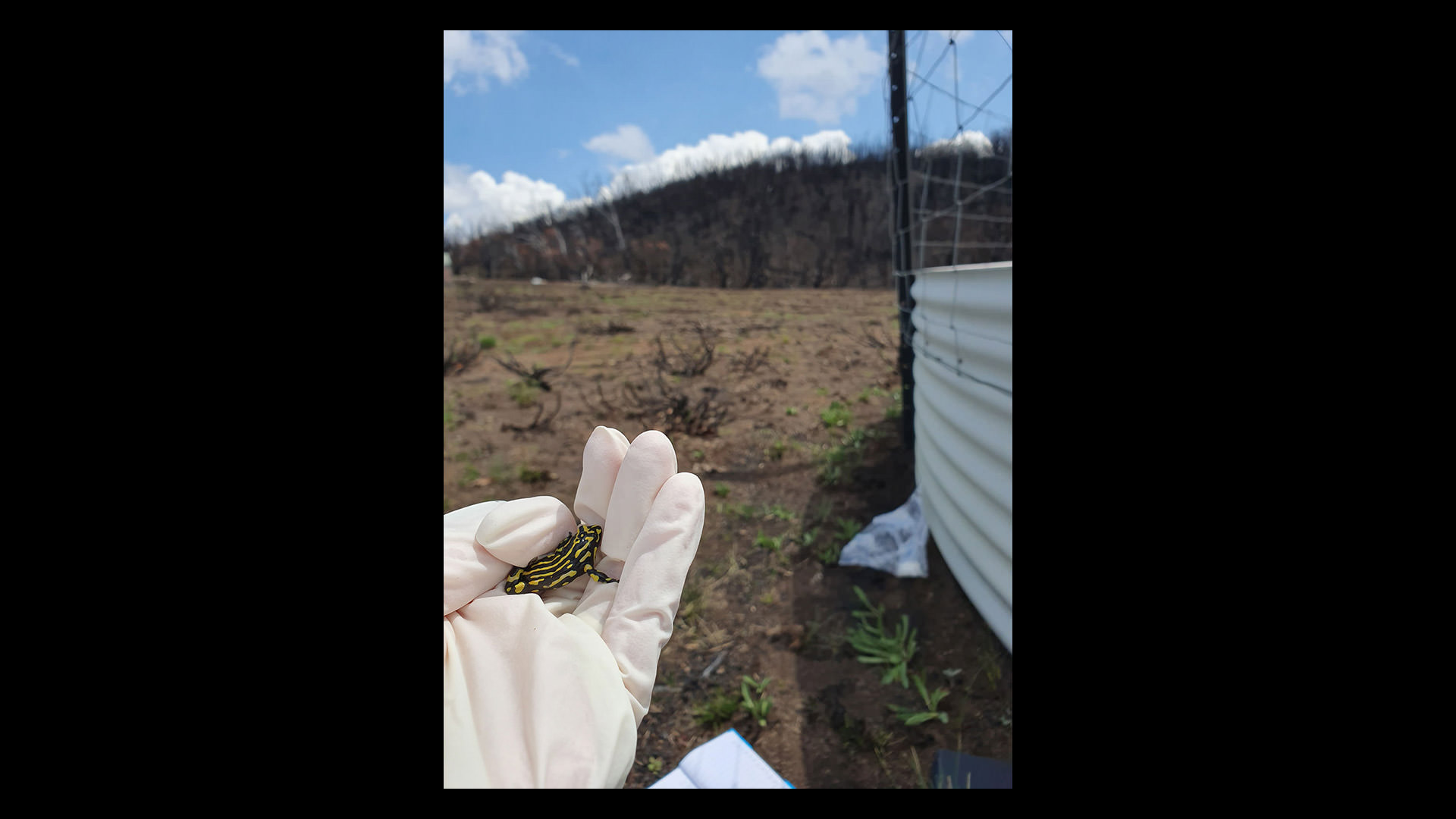 One of the surviving frogs after the bushfires in Kosciuszko National Park. Photo: Supplied

'What's not to love about them'

Professor Byrne and Dr Silla both gained their PhDs at the University of Western Australia and decided a decade ago to merge their individual expertise, which eventually led to their leadership of UOW's research laboratory.

Dr Silla, who grew up in the Swan Valley, where blue-tongued lizards would sometimes wander into the classroom, developed a love of the native wildlife that surrounded her family's large property. She decided at age 12 that she wanted to become a zoologist and never strayed from the notion of conserving wildlife.

Professor Byrne, a surfer who also loves the outdoors, has long held the belief that Australia's native animals have shaped the nation's sense of identity and is he equally dedicated to safe-guarding our biodiversity.

But both admit they knew little about the corroboree frog when approached to work on the recovery program.

"In fact, in my undergraduate years, I didn't know that much about any frog," recalls Dr Silla with a laugh.

"It was just fortuitous that when I signed up to do a PhD and was looking for a topic, preparations were underway for Year of the Frog in 2008. I soon learned that 41 per cent of amphibian species globally were threatened with extinction so I thought 'Wow, these incredible little animals need some help'."

When asked why they chose to study a tiny, slow-moving amphibian over endless other endangered native species, both Professor Byrne and Dr Silla give a 'what's-not-to-love-about-them' response.

Even the frog's toxicity, produced in part by eating ants, they believe, is fascinating.

And the frog, it seems, has been scientifically proven to have personality.

"One of our PhD students, Shannon Kelleher, became curious about the topic of personality, so after discussions she went away and researched it with intensive behavioural experiments," recalls Professor Byrne.

"Working together, we found that some individuals were consistently more active, exploratory and bolder in the face of predation than others - so one more reason to be impressed by these animals." 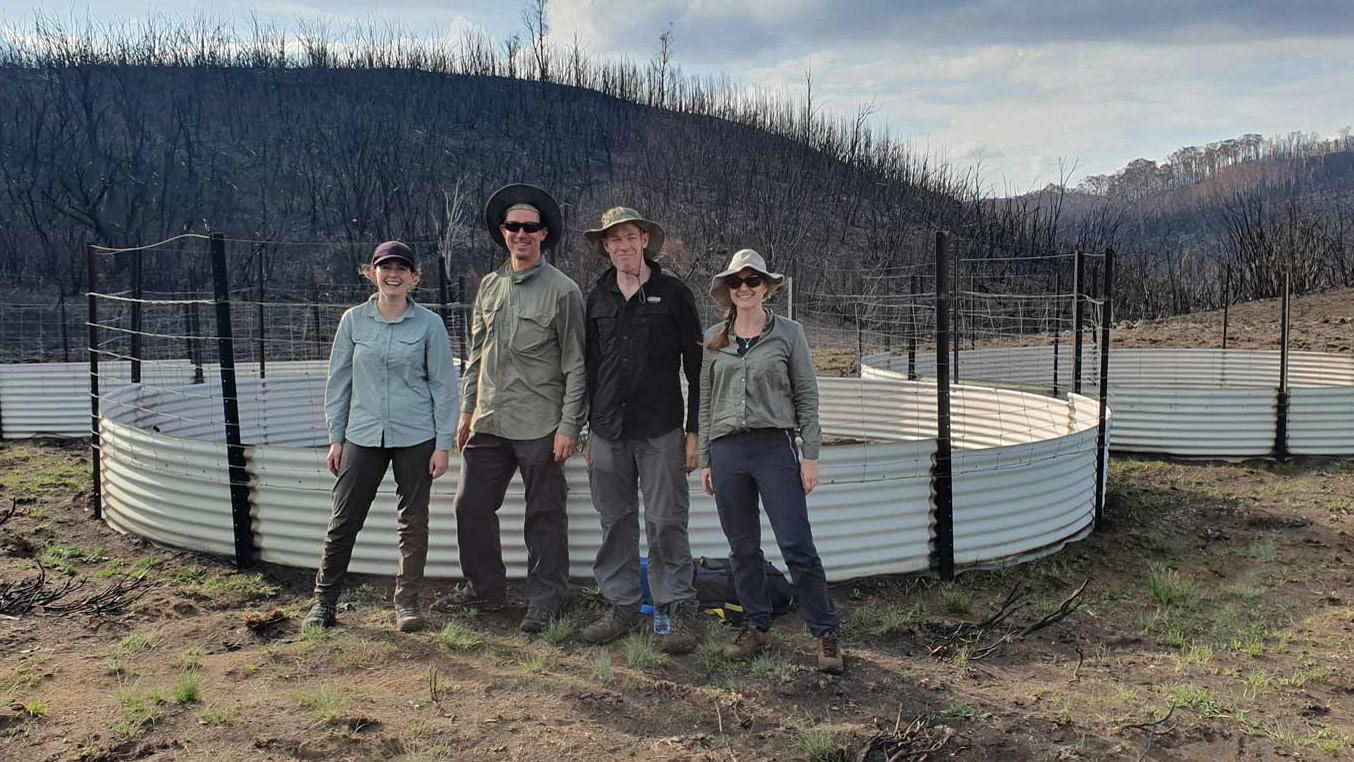 The research team survey the damage after the January bushfires in Kosciuszko National Park. Photo: Supplied

Professor Byrne and Dr Silla's relentless dedication to saving the corroboree frog has at times over the past decade grabbed world-wide attention.

They played a major role in developing a hormone treatment that can be applied to the skin of the male and female frog, to create 'the right mood' for courtship and reproduction.

Topical application eliminates the need for specialised training in amphibian injection, one of the reasons why reproductive technologies have not been widely adopted by captive breeding facilities.

Dr Silla says she hoped the development of a user-friendly, cost-effective method for hormone application would lead to more captive breeding facilities using hormone treatment to boost the breeding success of endangered frogs.

"Amphibians have highly permeable skin, so we were able to squirt the hormones onto the ventral pelvic region of the frog and it soaked right in," she says.

The team also recently discovered that a diet rich in carotenoids, a micronutrient produced by plants and present in many insects eaten by frogs, could give them a healthy start to life.

It is micro-wins like these discoveries that puts the wind in the team's sails, says Professor Byrne.

"Setbacks like the fire affect you emotionally, there's no doubt. You'd have to be a robot for that not to happen," he says.

"But we have learned a lot and the team is ready to move on with plans for a bigger and better recovery program. For example, the team is already working on ways to fire-proof the field enclosures." 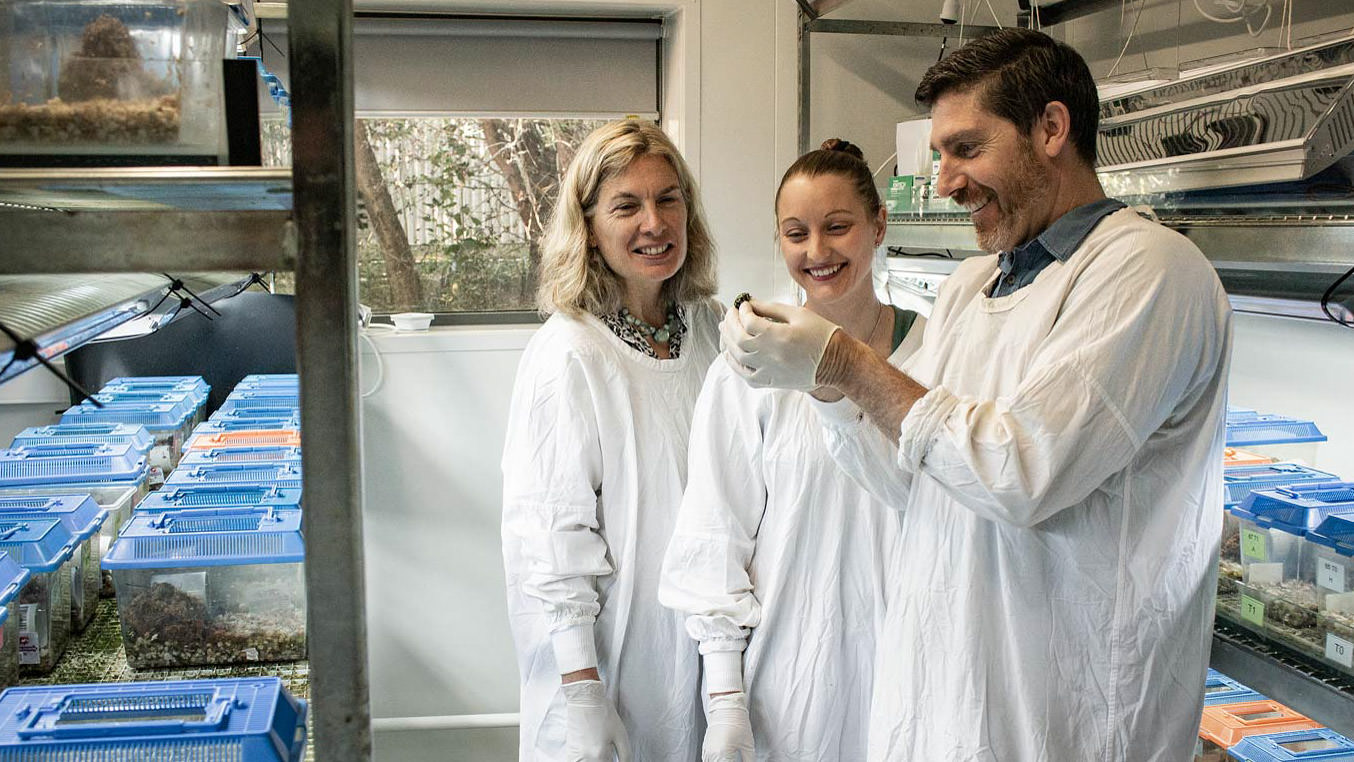 Dr Silla, who recently visited the enclosure site hit by fire, says the frogs who survived are still doing well and will remain on site to ensure no diseases are brought back into the lab.

"They remain of great value to our study and will be monitored regularly to check on their body condition, weight, cutaneous microbiome and colour intensity."

Another stroke of luck in this remarkable survival story is that equal number of males and females survived the blaze.

"They are too young at this stage to reproduce but if things go well that will happen in a year or two," says Dr Silla.

Both she and Professor Byrne are conscious of the ticking climate change clock but they remain convinced they are doing everything possible to ensure the corroboree frog remains an active member of Australia's iconic native animal club.

"Nature often finds a way if given enough time but the problem with climate change is the rate that things are changing," says Professor Byrne.

"If threatened species can't evolve fast enough to cope with the new set of challenges they face, we will need to focus our attention on finding innovative ways to increase their adaptive potential.

"I've no doubt the recovery team's positive energy and their depth of knowledge and expertise will ensure the corroboree frog is around for future generations."