Why 1969 was a fascinating era in American history.

The cultural and political rebellions of the 1960s reached an explosive climax in the years of 1968 and 1969. The long Sixties were to continue until at least 1975 when the Vietnamese revolutionaries swept into Saigon having already defeated the American imperial military machine. Yet 1968 and 1969 not only brought the decade to a close in a formal sense but also witnessed an accumulation of apocalyptic spectacles. 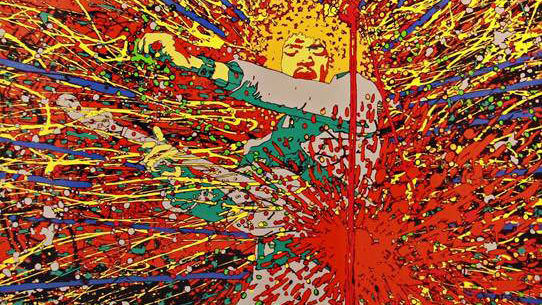 1968, in particular, was a year of dramatic events: the assassinations of Martin Luther King and Robert Kennedy; the rebellion at Columbia University in New York; the Paris uprising that also penetrated the French provinces and almost became a national revolution; the Czech uprising crushed by the Soviet tanks; the police riot in Chicago that saw the dreams of antiwar protestors battered by police batons; the massacre of students in Mexico prior to the Olympic Games; the Black Power salute at those games in which Tommy Smith and John Carlos were joined by Australian Peter Norman wearing a badge of solidarity. The list goes on and on and testifies to the critical significance of 1968.

Yet 1969 should not fade into the recesses of memory. This, the fiftieth anniversary of 1969 in America, brings back to mind many events that shine a light on the Sixties experience as a whole and point towards utopian futures as well as contemporary nightmares. The Manson Family murders and the Altamont Festival capture the nightmares but here I've focused on two profoundly important moments for the counterculture and its dreams: People's Park and Woodstock.

When an advertisement for a "rural reclamation project for Telegraph Avenue" was posted in the Berkeley Barb on April 18, 1969, little did people know that this would be the start of a mini-revolution in the town that had a campus of the prestigious University of California at its centre. Berkeley (and the San Francisco Bay Area as a whole) had been a breeding ground for radical movements and rebellions from the 1950s on but it was the Free Speech Movement 1964 to 1965 that cemented its place in the history of the radical Sixties.

Even in 1968, the Bay Area had a pivotal role. In that year radical momentum developed along Telegraph Avenue culminating in riots in June that accompanied rallies in solidarity with the French students and workers. These riots acted as a prelude to the struggle over People's Park. What many observers and commentators miss is that the battle over the Park was, in large part, a battle over Telegraph Avenue. 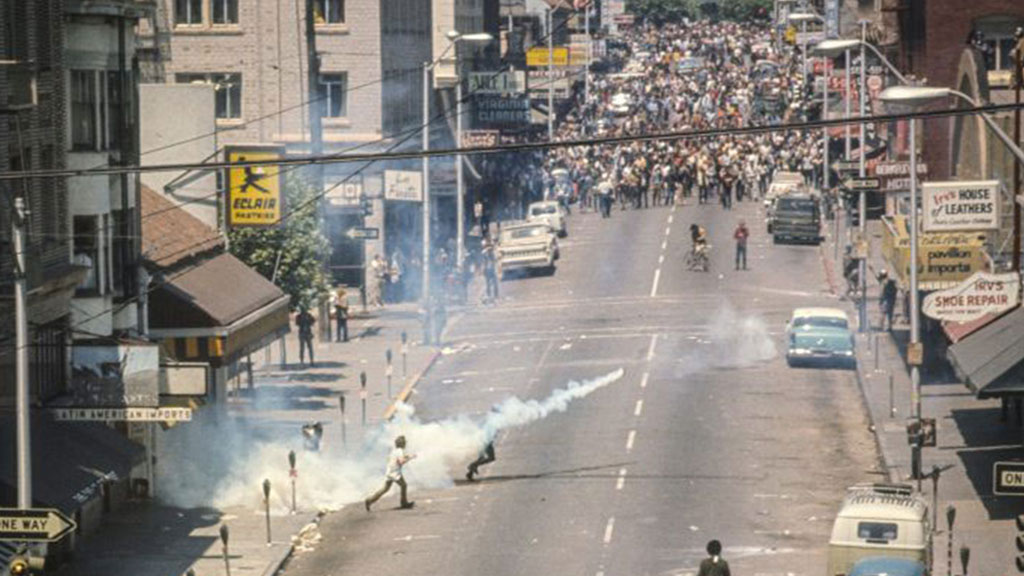 Telegraph stretched from the heart of Oakland to the Berkeley campus where it became, in effect, Sproul Plaza which had been the focus of the Free Speech rebellion. In the five or six blocks before the campus Telegraph was a thriving marketplace of book and record stores, coffeehouses, and street people/hippie hangouts. It had become symbolic of democratic free space. And in 1969 that symbolism was also attached to a vacant plot of land just off Telegraph and four blocks from campus.

The land was owned by the University of California. Conscious of the need to control community space in Berkeley, University administrators had commissioned an urban redevelopment project that culminated in the destruction of housing on that plot in 1967. The administrators were very aware that the area around Telegraph had become a core of community resistance to the dominant culture and its wars at home and in Vietnam.

One plan was to construct a soccer field but the land remained undeveloped and became an unofficial car park. Then a few community leaders came up with the idea of turning the land into a park. Thus the concept of "a rural reclamation project" was launched, reflecting the merger of countercultural pastoral dreaming and urban bohemianism.

The park that grew from the labour of the community contained Japanese rock gardens, a children's playground and mobile sculptures. It was a park and it was community art. It spoke to a growing ecological consciousness in the Movement as well as native American connections with the land. It was, in a sense, over-burdened with symbolism and yet it carried with it the spirit of radicalism that had shaped and defined Berkeley throughout the 1960s. The University was determined to reclaim it.

In the early hours of the morning on May 18, people occupying the land were dispersed by the California state highway patrol and a cyclone fence was erected. This fence, like all such structures, carried its own symbolism: ownership was declared, exclusion was announced. Private control over public land was re-affirmed and the aesthetic harmony of a green space was trampled upon and then shut down.

On that day the call went up to take back the park at a rally in Sproul Plaza and thousands marched down Telegraph only to be met by the firepower of the Alameda County police force. One man, James Rector, was killed, another blinded and over 100 required hospital treatment. 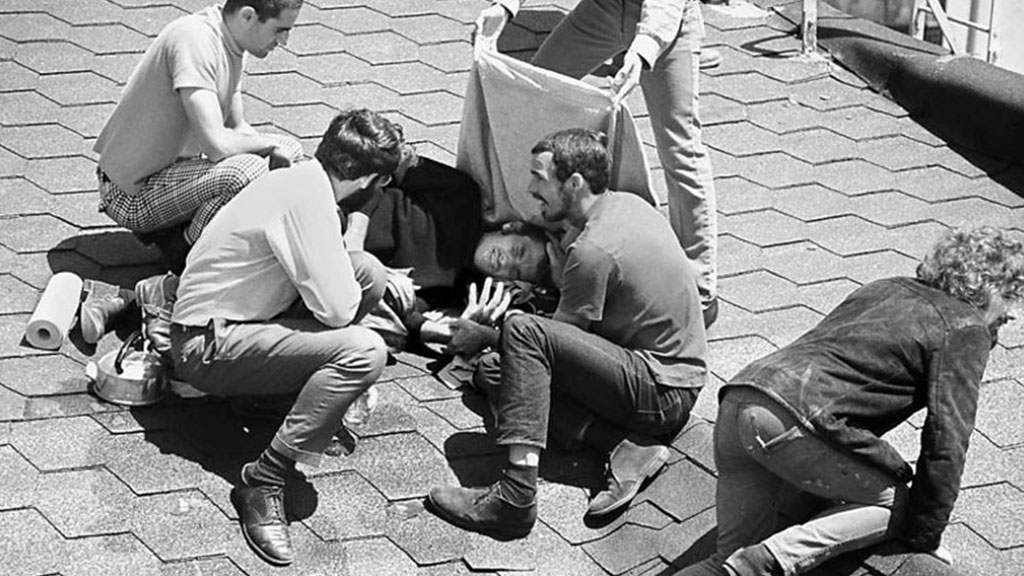 James Rector on the roof of Granma Books, waiting for the ambulance to arrive, in an image captured by Nacio Jan Brown. Photo: Nacio Jan Brown/The Berkeley Revolution

In the following weeks Berkeley was occupied by the National Guard under orders from then governor Ronald Reagan whose hostility to Berkeley radicalism was well known (and had, in conservative southern California, helped get him elected). The war was brought home in more ways than one, as on a particularly terrifying day helicopters bombarded the campus with chemical spray that left many in agony.

Yet the radicals and residents of Berkeley regrouped and on May 30 around 30,000 marched peacefully to the Park in an extraordinary display of community solidarity, love and resistance.

This is how the Woodstock Festival as it became known (despite being held in nearby Bethel, New York) was advertised. There are many readily available accounts of how the Festival, August 15 to 18, 1969, was organised, the logistics of getting the bands in, the way the numbers exploded and the festival became free. There was the three-disc album and the split-screen documentary Woodstock (which a young Martin Scorcese worked on as an editor). And there are new box sets of recordings and videos to mark the 50th anniversary.

Where People's Park is only remembered by a few activists and historians outside of California, Woodstock is etched onto the international imagination. Yet there are still debates about the meaning of Woodstock, its role within the counterculture and its place in the American radical tradition. The Yippie leader Abbie Hoffman, while riffing on the moon landing in his book Woodstock Nation, commented: "If I had to sum up the totality of the Woodstock experience I would say it was the first attempt to land a man on the earth. It took an awful lot of people to pull it off, but pull it off we did. Welcome to the Aquarian Age." 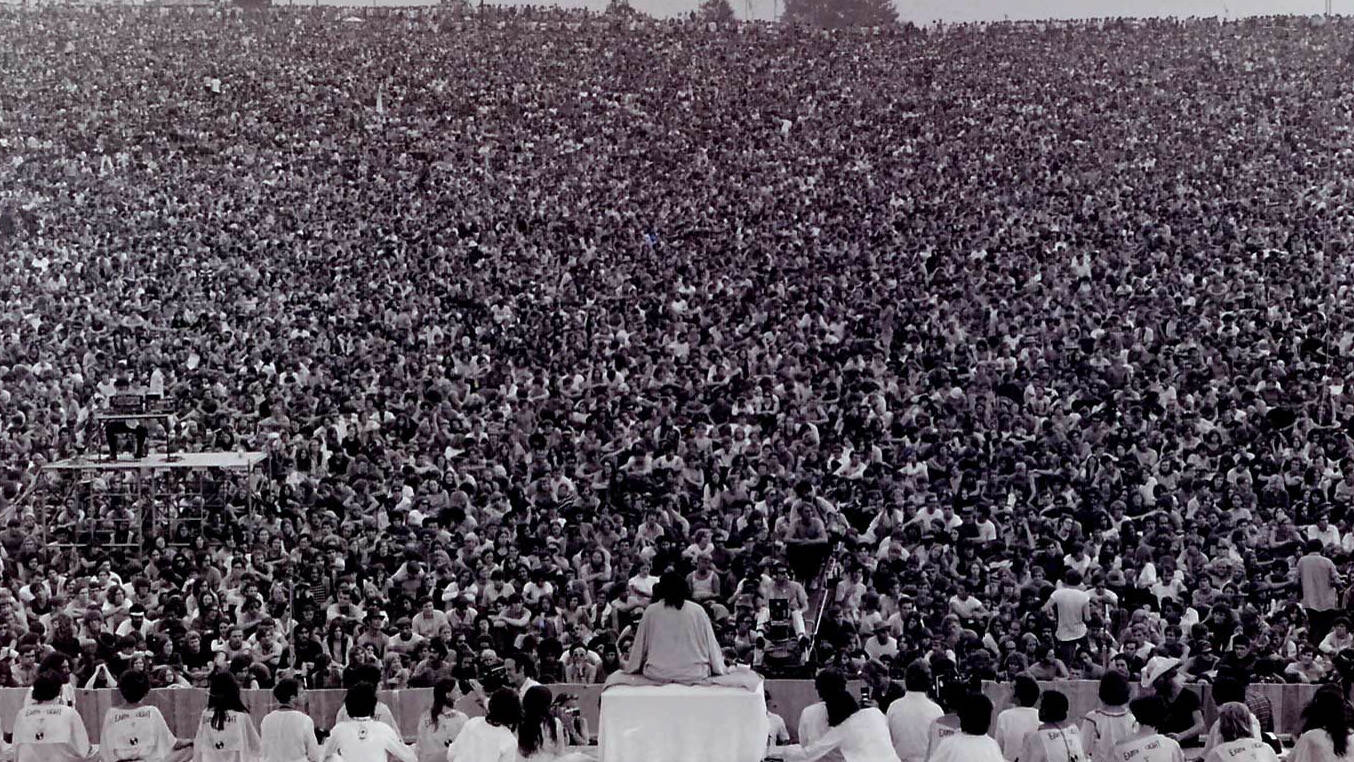 The opening of Woodstock 1969, with the Swami Satchidananda welcoming hundreds of thousands of people. Photo: Mark Goff/Wikipedia Commons

Richie Havens once observed that Woodstock was not really about sex, drugs and rock 'n roll. Rather, it was about civil rights and justice at home and the American War abroad. Havens himself concluded the opening of the Festival with a haunting improvised riff on "Freedom". For those who try to strip politics out of Woodstock, the introductory set by Havens poses a problem. As does Joan Baez.

She once argued that Woodstock was really somewhat short of a revolution and hardly stopped the war. And that, of course, is true. Yet in singing the great labour movement song "Joe Hill", a profound tribute to the songwriter from the Industrial Workers of the World (IWW), she drew on the American radical tradition and connected it directly to contemporary struggles against domination and exploitation. She mentioned her own husband, David Harris, a draft resister and leader of the Californian group Resistance, who was serving time in gaol. 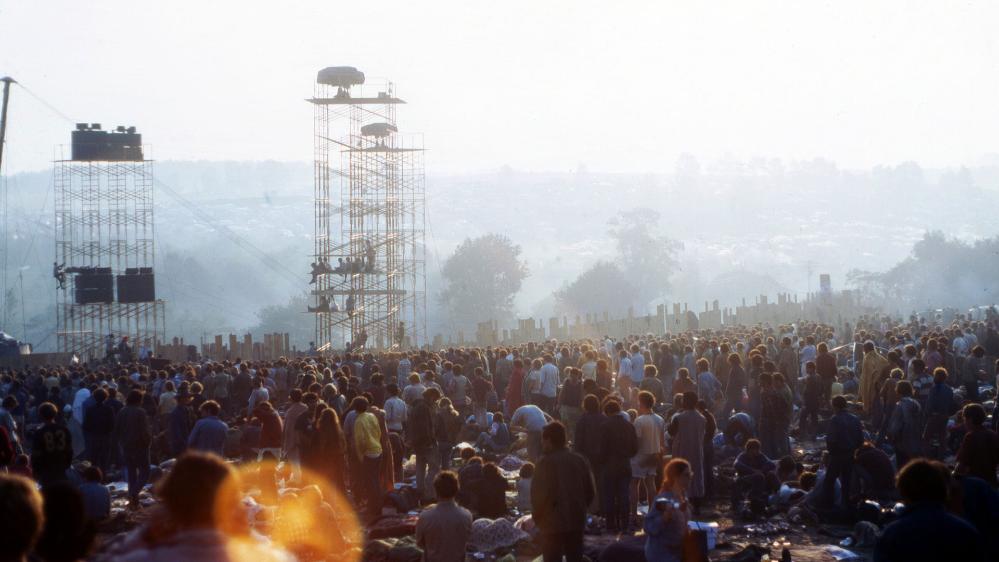 The Who perform at Woodstock in 1969. Photo: Wikipedia Commons

Peace and love were not just slogans for activists in the 1960s as they spoke directly to the American War in Vietnam and to the need to combat racism and war with the solidarity of agape love. Woodstock was a profound expression of that commitment. Joe McDonald (of Country Joe and the Fish) might have commenced his set with a somewhat unorthodox Fish cheer but his "Fixing to Die Rag" ("And it's one, two, three What are We fighting for…") had become an instantly recognisable antiwar anthem. He was not satisfied with the audience response and urged them to sing with more passion to stop the war. Even he knew that powerful singing would not stop the war but it could help as it drew people together in a collective struggle.

Not all of the musical highlights were directly political in the way that Jefferson Airplane's "Volunteers" ("Got a revolution, Got to revolution") was but they did all tend to reflect, in one way or another, the aesthetics of the counterculture. Thus Crosby, Stills, and Nash's "Suite: Judy Blue Eyes", had a dreamy harmonic quality that switched to Calypso style rhythms and was a tribute to Judy Collins, one of the icons of the folk song revival.

So, too, Santana's "Soul Sacrifice" combined Latino beats and searing rock guitar in a way that spoke directly to the counterculture. And topping it all, of course, was Jimi Hendrix. Hendrix's "Star Spangled Banner" remains, perhaps, the most evocative treatment of a national anthem in history. It is a beautifully realised piece of music that soared through the Woodstock skies and landed in the American heartland where it told the story of urban riots and jungle napalming through guitar licks that exploded the imagination.

It really is difficult to over-rate this musical experience, one I first heard at the time during a news item about the last day of the festival on ABC (our ABC) radio. This is not only the performance of an electric guitarist operating at his peak but of one who has captured the zeitgeist and played with it in surreal fashion. It is a fitting climax to a Festival that spoke to the hopes and dreams of a significant proportion of the generation known as "baby boomers".

Dr Anthony Ashbolt is a Senior Lecturer in Politics at the University of Wollongong and Editor of the journal Counterculture Studies. He is the author of A Cultural History of the Radical Sixties in the San Francisco Bay Area (London: Pickering & Chatto, 2013).