Category
Arts and Culture
Tags
UndergraduateStudent lifeCreative Arts
Business Areas
Faculty of Law Humanities and the ArtsSchool of the Arts, English and Media

It's said good things come in threes. From fairytales to Hollywood blockbusters and even to UOW creative artists.

In fact, people are wired to expect things in threes. Consider children's stories such as The Three Little Pigs or Goldilocks and the Three Bears. Hollywood loves a trilogy: Star Wars, The Matrix, Alien and Indiana Jones. Even in art there are three main primary colours, red, blue and yellow, and each has developed a meaning since ancient times.

But this story is not about fairytales, Hollywood blockbusters or even the three primary colours. It's a story about three extraordinary artists who graduated from the University of Wollongong's Faculty of Creative Arts three years ago.

These three artists say art will not make you rich, but you have to decide what is more important to you: money or a career you thoroughly enjoy. They believe their art is a challenge to strive and succeed and it takes hard work and determination.

Meet three young, talented artists who have resisted the "starving artist" stereotype, and are making a living from their creative endeavours.

Chris Zanko has been quite literally carving a name for himself in the art community. The young artist carves and chisels lines into pieces of plywood and then paints them in to create amazing images of houses.

He was the winner of the 2016 Gosford Art Prize, the 2016 GongCrete Art Prize, and a finalist in the 2015 Lloyd Rees Memorial Youth Art Award.

Late last year Zanko, painted a selection of works for his first solo show, which was hung at Egg and Dart Gallery, located in the Illawarra's northern suburb of Thirroul. Not only was the show a huge step forward for the young artist, but the entire show sold out in only 45 minutes, the day before it opened.

Egg and Dart Curator Aaron Fell-Fracasso, who has been watching the progress of Zanko's art for some time, says the young Wollongong artist is a painter going places and his latest show obviously connected with art lovers. 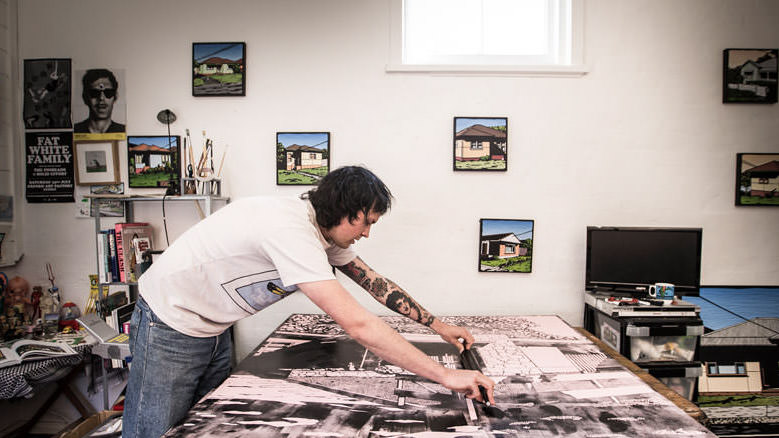 "Chris has captured a type of Australian ordinariness in a way that people recognise, respond to and embrace. The number of people I've heard say, I know that house, I grew up in that house or that's my house, is quite funny," laughs Fell-Fracasso.

The show of works called Umbra, which means ominous shadowing, was a selection of art deco, heritage and fibro houses the artist had selected from Wollongong suburbs.

"When I pick a house I want to paint, I'm looking for shadows and blocky shapes," says Chris, who is gaining a reputation for his paintings of local iconic properties using bright almost fluorescent colours.

"They are sculptural entities in the landscape," he says, pointing out some of his latest works, the mid-20th century architecture called 'Fibro Moderne'. Chris says that this type of fibro-clad homes was the hip look of the 1930s, '40s and '50s, popularised not only by architects but by movies and magazines.

"These days the old fibro house is vulnerable to changing circumstances and to future demolition. To carve and paint them is to set an image down that ensures their permanence in history."

When Misha Harrison makes her resin art, it resembles a scene out of the TV series, MasterChef. With a cocktail of different coloured ingredients Misha measures out precise amounts, stirs the mixtures into a runny coloured liquid and then pours out the viscous material in stylized S patterns all over an art canvas.

"Each of my resin art pieces is uniquely different. The colours will bleed and blend together in many different ways. Sometimes I start an artwork thinking one thing, only to find out 24 hours later I have ended up with something totally different," says the young artist, whose art spans many disciplines including painting, sculpture, textiles and installation.

After graduating from UOW in sculpture and textiles in the top five per cent for her year, she undertook further study and completed an Honours degree in visual arts.

Misha has been awarded various prizes including The Liz Jeneid Prize, the Hazelhurst Artist in Residence Prize and the NAVA Graduating Student Award.

Inspired by the beauty of the natural world around her, Harrison says her work highlights the complex relationships between a man-made synthetic environment and the natural environment. 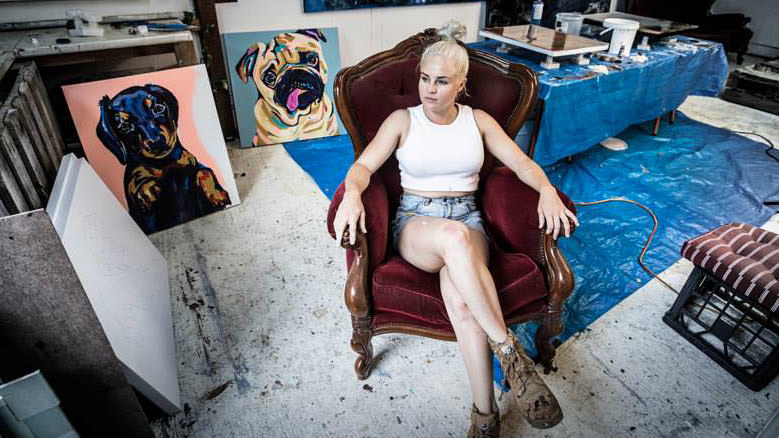 "My works are like nature itself. A push and pull between preservation and expansion," She explains.

Making a painting with clear resin is quite a learning experience. Resin is a two-part compound that hardens to a clear glossy finish. By adding colours to the resin and then pouring them over a canvas of board, the colours infuse and acidulate.

Even though the technique seems very messy, the vibrant colours and texture add a unique style to every painting, creating a magical, cosmos type look with a kaleidoscope of colour.

"Every resin painting seems to lead me along. For me it's like a journey with colour and texture. Sometimes I even get lost in the process. I like that!" Harrison says.

Interest was so strong in Harrison's resin artworks, the young artist decided to start her own Resin Art Workshops.

"I set up a four-hour workshop to demonstrate to artists and people who just want to be creative how to make resin paintings. I show the class how to mix resins, colours and demonstrate unique pattern techniques. Every client makes a piece of art that they can hang on their walls. It's really fun."

When asked if he is an artist or an environmentalist, Aristo Risi stops talking for a minute and thinks.

"I'm both. You could even say the art I produce is a type of ecological art. I have a deep connection to nature and with the ocean in particular, as well as creating images through photography."

Aristo is setting up his photographic exhibition called Suspended at The Moving Mountains Contemporary Art Space located in Wollongong's CBD. The long-haired artist, sporting an elongated hipster moustache, points to a selection of photos taken of jellyfish and then spins around to point out another collection taken of plastic bags.

"Jellyfish are beautiful creatures. I just love watching these translucent guys filled with colour. They are so mysterious and perfect subjects for underwater photography. And then you have these! Plastic bags! They may be graceful in their own way but they are a curse to the planet's oceans."

The underwater artist tells me that more than 100 million marine animals are killed each year due to plastic debris in the ocean and one of the biggest issues is marine animals eating plastic.

"To a hungry sea turtle, plastic bags look awfully similar to jellyfish, don't you think?" Comparing his photos of plastic bags underwater to his jellyfish images. "Because sea turtles eat jellyfish, they can also eat plastic bags by mistake. The bags block their digestive tracks. In short, they eventually starve to death."

The 26-year-old graduate in multimedia creative arts and qualified scuba diving instructor believes that photography is a powerful tool for marine conservation.

"I've always been a water lover, so when I discovered the wonders of photography while doing my multimedia arts degree it was only natural that I combined the two," he says. 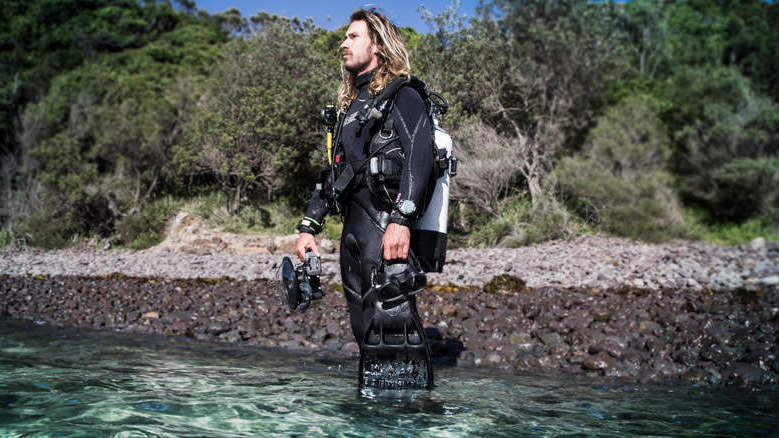 Risi also believes underwater photography has the power to show people who have never experienced the marine environment beneath the ocean's surface and helps educate people on the value of conserving it for future generations.

"I'm lucky," he says. "As a freelance photographer, I have a range of clients. These guys are my bread and butter, but my underwater photography is different. I do this because I love it. It's my passion. And, hey, if I educate the public and inspire the next generation of artists, that's great too."

Aristo has an incredible talent for capturing both the fact and the emotion and beauty of an underwater scene, from grey nurse sharks to playful Australian fur seals.

But the adventurous photographer says it's not without its dangers. "It's easy to get caught up in the moment while taking photos underwater. You have to be on your game when scuba diving. You have to watch your air and depth gauges, factor in decompression stops and be aware of your surroundings," he says.

Quite a crowd has gathered at the photographers' opening night, for his show, Suspended. It's a who's who of ocean lovers, from anti-plastic activists to marine biologists. The night takes a twist and the gallery floor is open to members of the crowd who take the opportunity to publicly speak out about protecting our different fish species to global warming and the effects on our oceans.

There is also a fundraiser to support a local group called Plastic-Free Wollongong, which aims to reduce the city's plastic pollution footprint. The night becomes an eclectic mix of art, speeches and information gathering.

Some hours later, I walk out of the show and think that when it comes to ocean conservation, Risi's passion for his art and his photographic talent is exactly what is needed to connect the masses to oceans that are over-fished and over-polluted.