The story behind North Wollongong parkrun

How this worldwide event is promoting active lifestyles, encouraging volunteers and building a community.

Feeling somewhat nervous, I bend down to redo my shoelaces as a way to pass the few minutes before we start. Behind me (likely for not very long) 249 others are jumping and stretching, but they are also noticeably in great spirits considering they gave up a Saturday morning sleep-in to be here.

"Hello, everyone. Welcome to North Wollongong parkrun." Brendan Hall grabs the attention of the crowd with a megaphone. He leads the crowd in warmly acknowledging the first-timers, several visitors from around Australia, as well as a couple on holidays from the UK. Then after a quick run-down of the course and a big thanks to the volunteers, he hands control over to the timekeeper. "On your mark, get set, go."

parkrun (one word, lowercase) is a volunteer-led, free of charge, five-kilometre run/walk held every Saturday morning at more than 1,400 parks around the world. More than 290 of those are in Australia.

The event is timed using each runner's unique barcode scanned along with a finishing token. This system allows any of the 2.8 million parkrunners to turn up to any of the parkruns around the world and run with locals for free.

As the event director, University of Wollongong graduate Brendan Hall is one of the locals who helped bring this worldwide running event to North Wollongong.

"My affection for parkrun comes from what it offers runners from the perspective that it's free and open to absolutely anybody," Brendan says. "I think that inclusive part is really important."

As we round the first bend and onto a bush trail I'm swept up in a swarm of fast runners that carries me along. This slipstream quickly evaporates as the field thins out. A man and his whippet overtake me. The dog has a look of unbridled joy in its eyes.

Starting out in 2004 as the Bushy Park Time Trial with just 13 runners, parkrun was founded in England by Paul Sinton-Hewitt as an excuse for him to catch up with some friends each week.

"It's grown from there to be this huge not-for-profit worldwide organisation," Brendan says. "It's changed the way many local communities think about running and exercise in general."

parkrun arrived in Australia in 2011 at Main Beach on the Gold Coast. It has gone on to attract many participants who wouldn't normally consider competing in a traditional race. In fact, more than 40 per cent of parkrunners don't belong to a traditional running club.

Weaving my way along the lush trail, I catch a welcome sea breeze as I cross a boardwalk. I'm then met by a smiling volunteer in a bright orange vest who points me down a concrete path and offers some encouragement, "Keep going, you're doing great." I manage a quick "thanks" in between rapid breaths.

"We started here back in September of 2017," Brendan says. "After getting council approval and gaining some sponsorship we had a massive launch - much bigger than what we had expected - with almost 650 people showing up. We were expecting about 150."

With two well-established parkruns already in the Illawarra region, at Sandon Point and Shellharbour, Brendan was optimistic North Wollongong would attract its own local participants and volunteers beyond the first week.

"We thought there was a great opportunity to bring one here to the middle of Wollongong and grow parkrun in this area even more," he says. "The course itself is probably one of the biggest attractions. Just like the other two Illawarra parkruns, there's a good variety of terrain to run on and views to take in."

After one change in start/finish line and more than 30 events, it's clear North Wollongong parkrun has cultivated its own community. Around 200 parkrunners consistently show up every week, while the numbers Sandon Point and Shellharbour remain as strong as ever.

As I reach the halfway point I give a thumbs-up of thanks (words are now a struggle) to another volunteer and start on my homeward journey. I manage to briefly lift my head from the grass in front of me to appreciate the views of North Wollongong Beach. 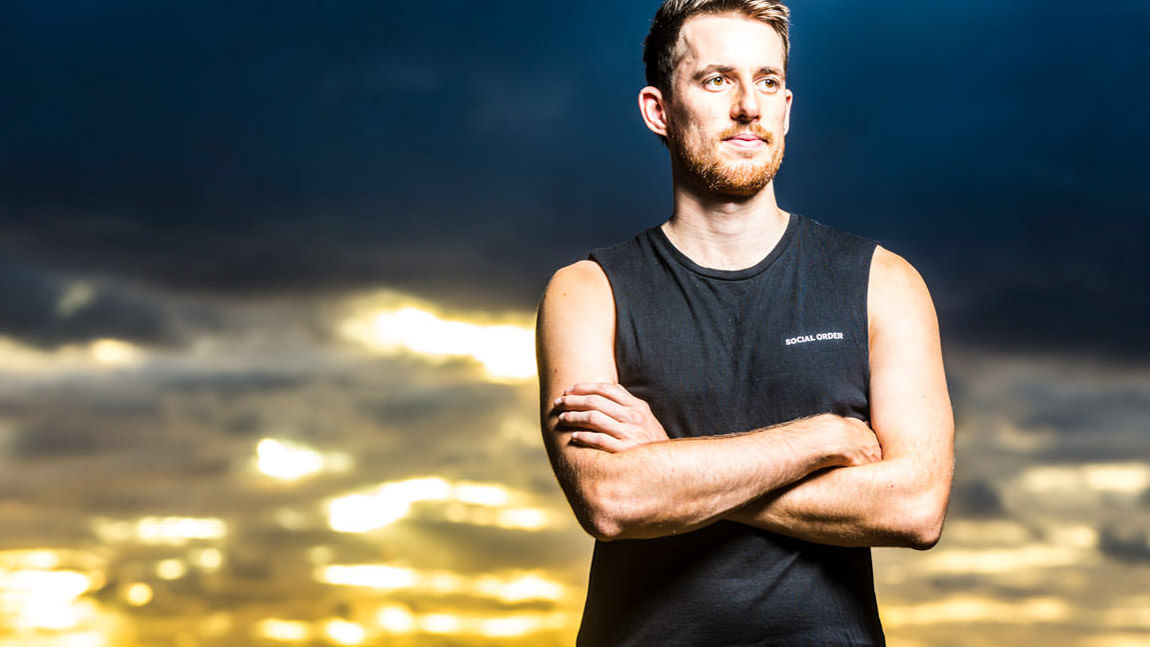 Brendan - who recently completed a personal milestone of 50 runs - has been involved with parkrun as a runner and volunteer since 2014.

"I did my first one on New Year's Day at Sandon Point and since then I've done many parkruns around the region," he says.

Brendan is finding this passion for promoting an active lifestyle and his background in Human Resources have been valuable in his role as a parkrun event director.

"I graduated from UOW with a Bachelor of Commerce majoring in Human Resources Management and now work full-time at IRT," he says. "As a HR manager, a lot of what you're doing is coaching and advising people. There's a lot of stakeholder management in the parkrun environment, so those HR skills have certainly helped."

As I continue homeward, I discover an unexpected highlight of this up-and-back course: I get to cross paths with every single runner. I see kids literally doing cartwheels, volunteers high-fiving parents with prams and runners yelling encouragement to friends as they cross paths. The atmosphere is one of abundant positivity.

Each local parkrun event is completely volunteer-led with roles kept quite simple to lower the barrier to volunteering. Regular runners are also encouraged to volunteer when they can.

"parkrun relies on people giving up their time to make this work from week to week," Brendan says. "We run pretty lean with about 11 or 12 volunteers. It's a great opportunity for people who don't run to come and get involved."

When it comes to attracting and retaining these volunteers (there's more than 346,000 worldwide), Brendan says it's all about recognition and encouragement.

"We ask our runners to thank the volunteers as they run and we talk to all of our volunteers about encouraging the runners. This creates an environment that is really supportive and really inclusive."

Associate Professor Dr Michael Jones, of UOW's Faculty of Business, has done extensive research into volunteering and says this recognition - along with our psychological need for autonomy and belonging - is important in retaining volunteers.

"All of the rhetoric around volunteering will point to altruism as the main driver for volunteering," he says. "To a degree this is true, people enjoy giving. However, people also want recognition for their giving. There is an element of self-satisfaction through knowing that they are giving, but also being known for giving."

Lisa Jones, who came down to run the morning of her wedding, has volunteered for parkrun more than 20 times. Like many volunteers, she started out as a runner, but when North Wollongong parkrun launched, she saw an opportunity to give back to her community.

"I get a lot of joy from volunteering," she says. "Everyone is happy. You get to experience the community having a great time in our local area. This is part of my life. I come every Saturday."

Three and a half kilometres in. I'm struggling. I consider dropping my pace when another runner comes up beside me. "Come on, you're young and fit. Let's go." Given little option, I nod approval and do my best to keep up.

With a 'run not a race' philosophy, parkrun attracts a wide variety of people, from families to competitive runners. And Brendan believes their reasons for doing parkrun vary just as much.

"Some people come down and use this as part of their competitive training," he says. "Then there's people who are on big weight-loss journeys, where parkrun is helping them live healthier lifestyles. And then you've got others who come down because they want to get involved in the community - it's a social event for them. That's one of the great things about parkrun: you can get whatever you want out of it."

Sporting a black 100 Club milestone shirt, Geoff Walter has completed more than 130 parkruns. He comes to keep fit and stay in touch with friends - much like the parkrun founder, Paul Sinton-Hewitt.

"I do it for exercise. It's the reason I run through the week - to train for parkrun," he says. "But also, parkrun is a wonderful social activity for every participant. I started at Sandon Point, and still go back every now and then to see my friends."

Back on the bush path through Puckey's Estate, I keep thinking the next bend will be the last. The whippet, who I thought would have run out of stamina by now, is nowhere to be seen.

Good for the mind and body

"Physical activity, especially at moderate to vigorous intensity, which parkrun is, will lead to better mental health, such as reduced rates of depression and higher rates of wellbeing," he says.

"Unlike some group sport, activities such as parkrun necessitate self-referenced judgements of success, such as 'Did I do a personal best?', which are psychologically healthier than other-referenced goals, like 'Did I win?'," Dr Vella says.

This combination of social components and self-referenced goals are likely to lead to high-quality motivation and far-reaching benefits for both our physical and mental health.

As I enter the last few hundred metres I pass a volunteer photographer. I do my best to look like a runner who isn't in a world of hurt. Images posted on Facebook (see below) would later confirm I failed.

The health of the community

It's human nature to want to belong to a group and the inclusive ethos that parkrun has cultivated amongst its runners ensures others feel welcome. Brendan believes that beyond the personal benefits parkrun provides, having a free, regular event provides many with an increasingly rare opportunity for real human interaction.

"For the community, it provides a place for people to come down and feel included," he says. "If they're socially isolated within their own lives it gives them an opportunity to come down and be a part of something where everybody comes together."

Dr Vella says the social pursuit of physical activity is likely to benefit the health of the whole community.

"Being social, pursuing goals in conjunction with others can buffer against the onset of mental health problems," he says. "Providing a free, social, motivating avenue for physical activity to the public is a very important public health initiative."

I muster a weak attempt at a final burst of speed and cross the finish line. I collect my finishing token, but it's a full five minutes before I have the energy to have it scanned along with my printed barcode.

First-timers are given a round-of-applause. Visitors are warmly acknowledged. Milestones - both for runners and volunteers - are recognised. Encouragement is found at every bend. These are the things that happen at every parkrun. These are the reasons why parkruns are launching in communities all over the world. They are proving to be a valuable investment in the health and wellbeing of our community. All without costing a cent.

I finished 12th with a PB time. Something I'm certain wouldn't be possible without the other runners and volunteers around me. I came to parkrun to push myself mentally and physically, and I certainly did that. Others came to enjoy themselves with friends and family. Judging by the smiles I see as others cross the finish line, they've achieved their goal too.

Registering for parkrun is free and your printed barcode can be used anywhere around the world.