The history of women's activism

Senior Professor Vera Mackie and Dr Sharon Crozier-De Rosa trace the memories of women who have made history, changed the world, and paved the way for their modern sisters.

On January 21, 2017, they marched. Millions of women - and men - throughout the world took to the streets, of Washington DC, Sydney, New York, Nairobi, New Delhi, Los Angeles, Paris, Berlin, London, and countless more cities to protest the election of United States President Donald Trump, who had been sworn in just a day earlier. All in all, there were more than 600 marches across 81 countries.

They wore pink 'pussy' hats, a reference to Trump's infamous Access Hollywood video, and bore signs that were clever, poignant, astute, and, often quoted Beyoncé - "Who runs the world? Girls!" It was a defining moment of Trump's new presidency but also of women's activism in general. It was a rallying call for modern women - 'Stand up! Be counted! Use your voice!' But while it felt very 'of the moment' - the Women's March began as a Facebook group - it also built on the passionate legacy of the sisters who had come before, the millions of women who had used their voice and their bodies to agitate for change.

They watched the Women's March of 2017 with great interest, but say the mass rally was just another chapter in a long, complicated history of women taking to the streets to express their demands.

"Vera and I are both fascinated by the tenacity and mobility of the Women's March," Dr Crozier-De Rosa says. "The 2017 march prompted a movement for women's political empowerment in the United States, and has stimulated many women to stand for political office. We saw the results of that in the November 2018 US mid-term elections, with a record number of women elected to Congress.

"But it is by no means the first time that women have used the spectacle and the collective power of the women's march when campaigning for their rights. Indeed, the women's march was a ubiquitous part of women's suffrage campaigns around the world, a well-used suffragist tactic." 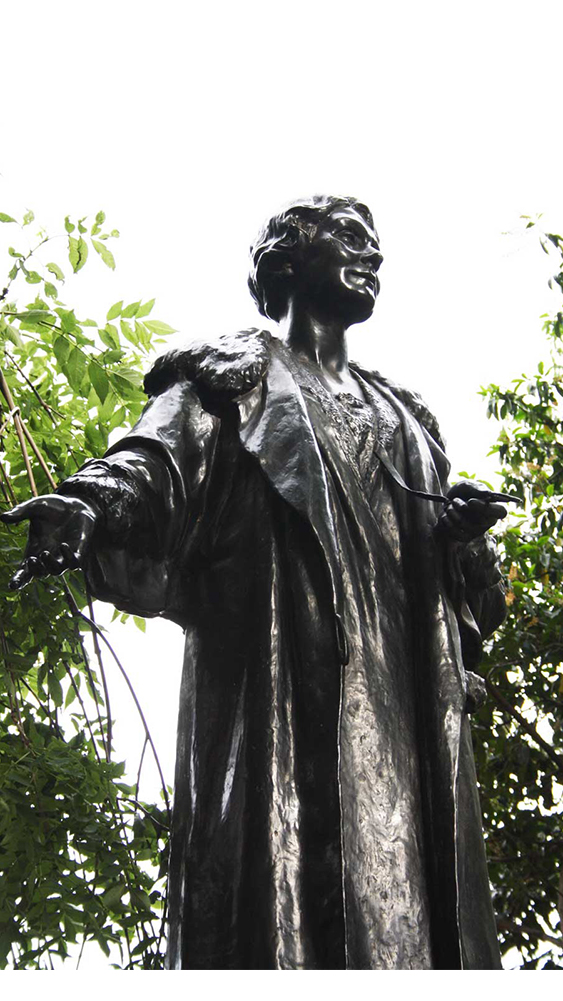 Indeed, women's activism has long been a force for change. Dr Crozier-De Rosa and Professor Mackie, both historians, say they were inspired to write Remembering Women's Activism to challenge the male-centred view of history and provide a record of the countless women who have challenged the status quo, often in the face of violence and persecution.

"Many of the big modern world events that were considered worth remembering - publicly and academically - were remembered as men's stories," Dr Crozier De Rosa says. "I am thinking of the big wars, the Cold War, World War One, World War Two."

Professor Mackie adds, "We didn't just want to make women more visible in history, we wanted to write about women who had been active in trying to change their societies. We were interested in whether and how they had been remembered."

"The timing also seemed right for our book, with the commemoration of significant anniversaries of women gaining the vote. The year 2018 marked the centenary of women's limited suffrage in the UK (full suffrage being gained in 1928), and 2020 marks the centenary of women's suffrage in the US. Women in Australia and New Zealand, though, gained the vote well before their sisters in the northern hemisphere."

Militant suffragists (also known as suffragettes in the UK) play an integral role in the volume. The book charts the worldwide fight for the right to vote in the late nineteenth and early twentieth century. With a focus on the suffrage cause in Britain, Australia and the US, Dr Crozier-De Rosa and Professor Mackie profile the women who were at the centre of the movements and their often controversial places in history, while at the same time examining the fight for suffrage as a whole. They write about women like Emmeline Pankhurst and Emily Wilding Davison in Britain, who were immortalised in the 2015 film, Suffragette, and Alice Paul in the US, who featured in the 2004 film, Iron Jawed Angels.

"While the film Suffragette portrayed the women in a positive light, earlier films had often presented the suffragettes as figures of fun, like Mrs Banks in Mary Poppins. Cartoons of the early suffrage movement ridiculed the women and questioned their femininity," Professor Mackie says.

While the campaigns were geographically disparate, and took place within different time frames, Dr Crozier-De Rosa says, "the stories of women's activism could not be contained within the boundaries of one nation-state".

"The movement for women's suffrage was a global one. We wanted to capture the transnational flows of ideas and influences." 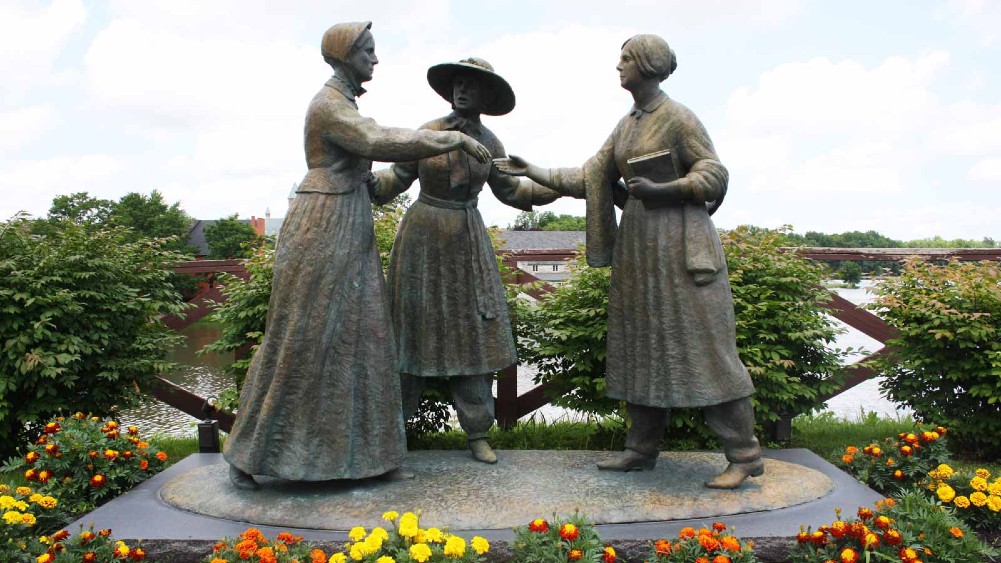 Writing the book was a fascinating and deeply personal experience for Professor Mackie and Dr Crozier-De Rosa. Their research took them around the world, to archives, memorials and museums, statues and signposts. They walked the streets of Seoul, Tokyo, Shanghai, Taipei, Dublin, Belfast, London, Manchester, Melbourne, Seneca Falls, and New York, taking photographs of memorial sites, plaques and statues. They visited locations that were the backdrop for some of the most significant historical campaigns. They retraced the steps of the women's movements and felt the weight of history.

Dr Crozier-De Rosa, who researches the history of militant Irish women, was intrigued by women who chose to take up arms or commit acts of violence.

"Growing up during the Troubles in the north of Ireland (a violent 30-year conflict), I understood that men were expected to be enticed or even coerced into the paramilitaries, to take direct action on behalf of their respective side in the conflict," Dr Crozier-De Rosa says. "Females were not expected to, although many did. When I saw or heard stories about female revolutionaries - like Constance Markievicz, the only woman sentenced to be executed for her leadership role in the failed armed insurrection against British imperialism in Ireland in 1916 - I was engrossed. What opposition did these women face from their male comrades? Given the immensity of their transgressions - as women who picked up guns instead of dedicating themselves to performing more usual womanly duties as wives and mothers - how did they expect to be remembered once the cause was won or lost?"

Indeed, the spectre of war hangs over the book. While it considers the controversial women who became paramilitaries, it also delicately covers those who were enslaved in military brothels or were victims of horrific sexual violence. 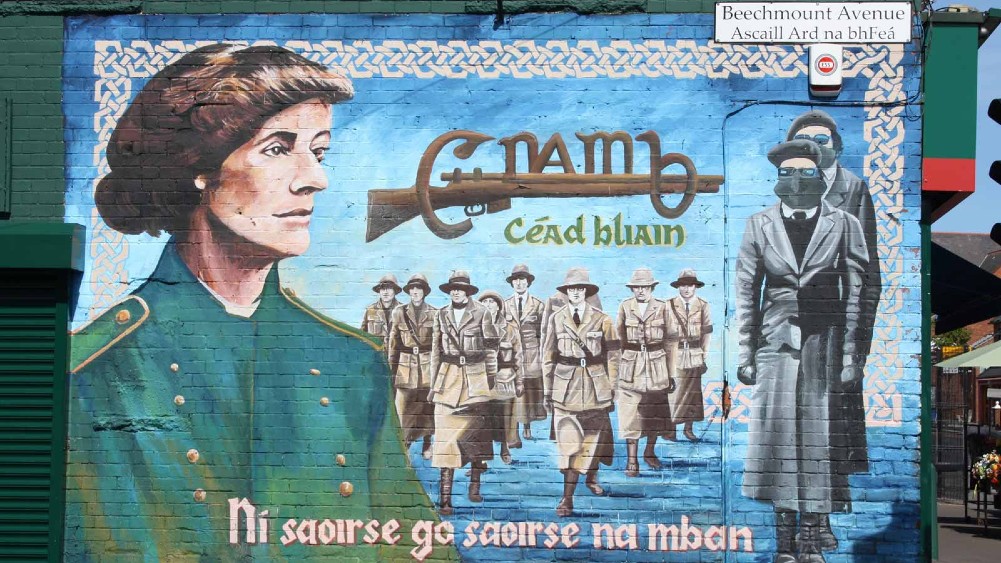 A memorial to the Easter Rising, in West Belfast, the Republic of Ireland. Photo: Sharon Crozier-De Rosa

Professor Mackie, who specialises in Asian history, focused on the fight for redress by survivors of sexual violence inflicted upon women by the Japanese military during the Asia-Pacific War. Japanese occupying forces in China, South Korea, and throughout the Asia-Pacific region subjected women to sexual abuse. The book, however, places this history in the context of sexual abuse in various military conflicts, right up to the present.

It would be decades before the survivors of militarised sexual abuse in the Asia-Pacific War would begin to share their stories.

An important figure in this history is Kim Hak-sun, a Korean survivor of wartime sexual abuse. 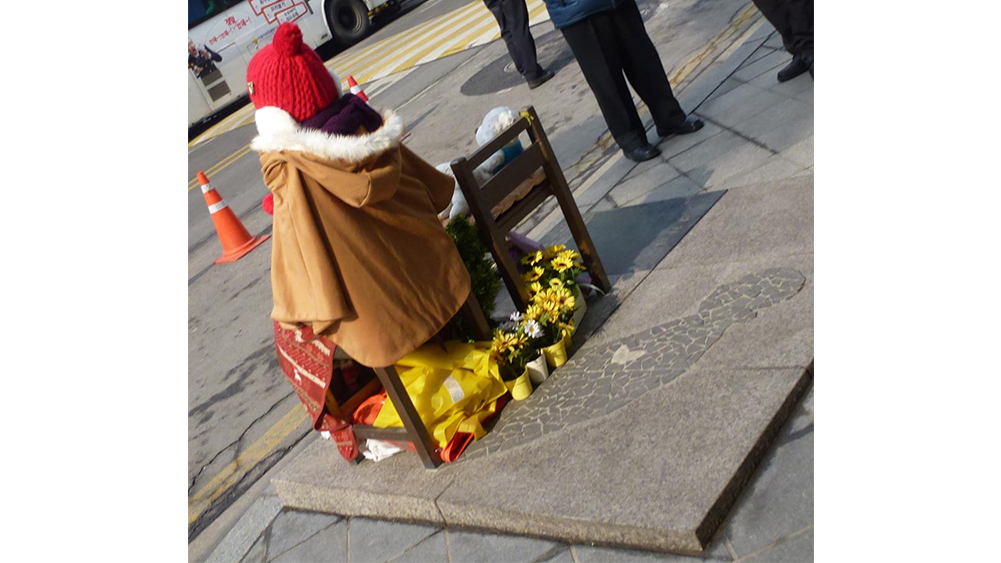 "In January 1992, then Japanese Prime Minister Miyazawa Kiichi made an official visit to South Korea. On Wednesday 8 January 1992, Kim Hak-sun, other survivors, and their supporters gathered in front of the Japanese Embassy in downtown Seoul. They demanded that the Japanese government make an official apology and provide compensation, chanting 'Apologise!' 'Punish!' 'Compensate!'," Professor Mackie says.

"This demonstration has continued to this day. The women have protested in front of the Japanese Embassy every week for more than 25 years. Survivors and their supporters hold placards in Japanese, Korean, or English. The elderly survivors sit on portable stools, surrounded by their younger supporters. They are often joined by international supporters visiting Seoul.

"While we did write about many inspiring individuals in the book, we were also writing about women like this, about movements, about the groups of women who achieved change through banding together."

Who runs the world?

Women's activism is experiencing a resurgence in the twenty-first century, with new rallying cries and new methods of spreading the message and gaining support. Think of the abovementioned pussy hats seen at the Women's Marches; 'Nevertheless, she persisted'; I'm With Her.

In the years since the first Women's Marches, women have been continuing the fight around the world, across the spectrum of issues that affect female rights and human rights. The fight has encompassed reproductive rights, gun control, Supreme Court nominees, sexual abuse, issues that will have repercussions for years to come.

In the Republic of Ireland, a landmark referendum debated whether to overturn the country's constitutionally established abortion laws. The vote brought many of Ireland's global citizens home and saw activists come out in force to repeal the eighth amendment, including pro-choice campaigners in Belfast who took abortion pills during a rally.

In Washington, DC, protestors spent weeks on Capitol Hill, agitating against the Supreme Court confirmation of now Justice Brett Kavanaugh, who was very publicly accused of sexual assault. They disrupted the televised hearings, told stories of their own sexual assaults, and sent coat-hangers to senators who expressed their support for Kavanaugh. More than 200 arrests were made, and in echoes of the way early suffragettes were depicted, many of the female protesters were dismissed as "loudmouths", their outrage merely "hysteria". 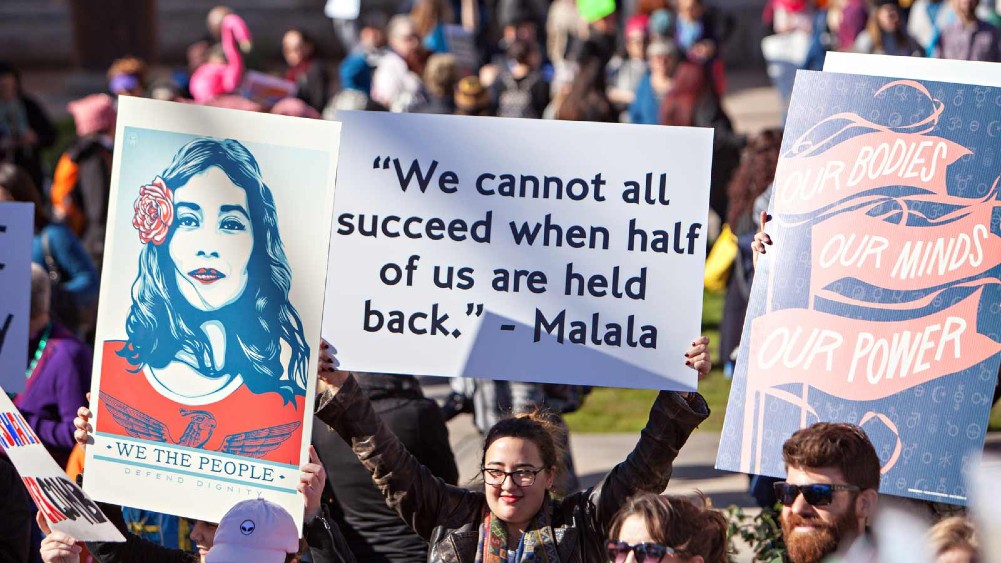 It has also become the age of the handmaids. Throughout the world, women have recreated the striking red and white costume of the handmaids, from Margaret Atwood's dystopian novel, and subsequent TV series, The Handmaid's Tale. "Because it's a visual symbol, women can use it without fear of being arrested for causing a disturbance, as they would be for shouting in places like legislatures," Margaret Atwood told the Guardian. "No one can accuse them of being immodest: they are well covered up. But everyone seeing these groups of women know what they mean in the context of the individual protest, whether it be Ireland, Argentina, or Arizona."

Much of the new wave of activism has been fuelled by rage against the current occupier of the Oval Office. And it is working. The 2018 mid-term elections in the United States saw record numbers of women elected to the House of Representatives, hailing from a variety of backgrounds, and many of whom had never before run for office. 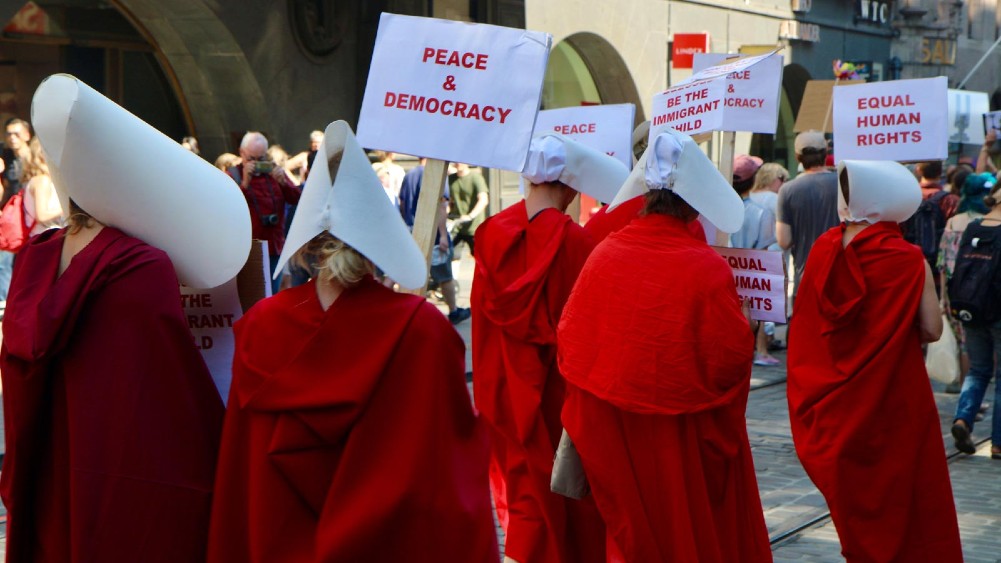 The authors are thrilled at the new wave of activism and say that recent movements combine the time-honoured tactics of marching and carrying placards with the power of social media. They also note the diversity of participants in recent marches and campaigns.

"Today women's rights do not stand alone," Professor Mackie says. "They intersect with the rights of groups who have been marginalised because of their ethnicity, racialised position, sexual orientation, gender identity, or citizenship status.

"Social media makes it easier to mobilise protestors but it doesn't seem to replace the physical demonstration. People still gather in public places to express their political demands. What was distinctive about the Women's March on Washington was that it stimulated similar marches all around the world. Photographs of the marches were placed on social media in turn, a rapid way of documenting history."

What lessons can modern female activists learn from their historical sisterhood?

"Feminists need to work to preserve and archive their own memory so that activists are not forgotten and don't fall prey to historical amnesia, as so many female activists have in the past," Dr Crozier-De Rosa says. "The book is as much about the struggle to remember feminist activism as it is about how those women are remembered today."