Students learn to make a positive social impact in the world.

A humanitarian project to provide clean drinking water to some of the world’s poorest people is showing UOW students what it takes to make a difference in the world.

"The poverty is gut-wrenching," final year materials engineering student Andrew Vild says as he describes the confronting conditions in urban slums and poor rural villages in Uganda. It was just so different to anything I've ever seen before - the slums, the poor quality of life - it can be overwhelming at first."

He leads four-week trips to Uganda where UOW students from engineering and biological sciences work on humanitarian missions to research and test drinking water sources. He can't quite put a finger on when the transition from blast furnace technician at the local steelworks, and being paid to do his degree, to a humanitarian project leader in east Africa began, but he is certain of his choice.

"To be helping communities change the basic ways they live simply by having access to clean water means so much. It can make the difference in having job security because they aren't getting sick, or it could help children to grow up strong andf healthy." The 23-year-old grew up in the Southern Highlands and took up a materials engineering degree at UOW as a Bluescope cadet, but he says he longed to do more than travel.

"I wanted to have a purpose to what I was learning," Andrew says. "I worked as a volunteer on an engineering project in India and that opened up the world to me in terms of possibilities of how engineering could be applied outside the conventional means. I saw the contrast between what we have in Australia and how poorer communities overseas live but also the potential for helping create change. My first trip to Uganda, working with communities, confirmed to me that I was on the track."

The trip was in his new role as a co-director of Project Everest, a social enterprise start-up that works on development projects to help improve the health and economic wellbeing of people in developing nations. 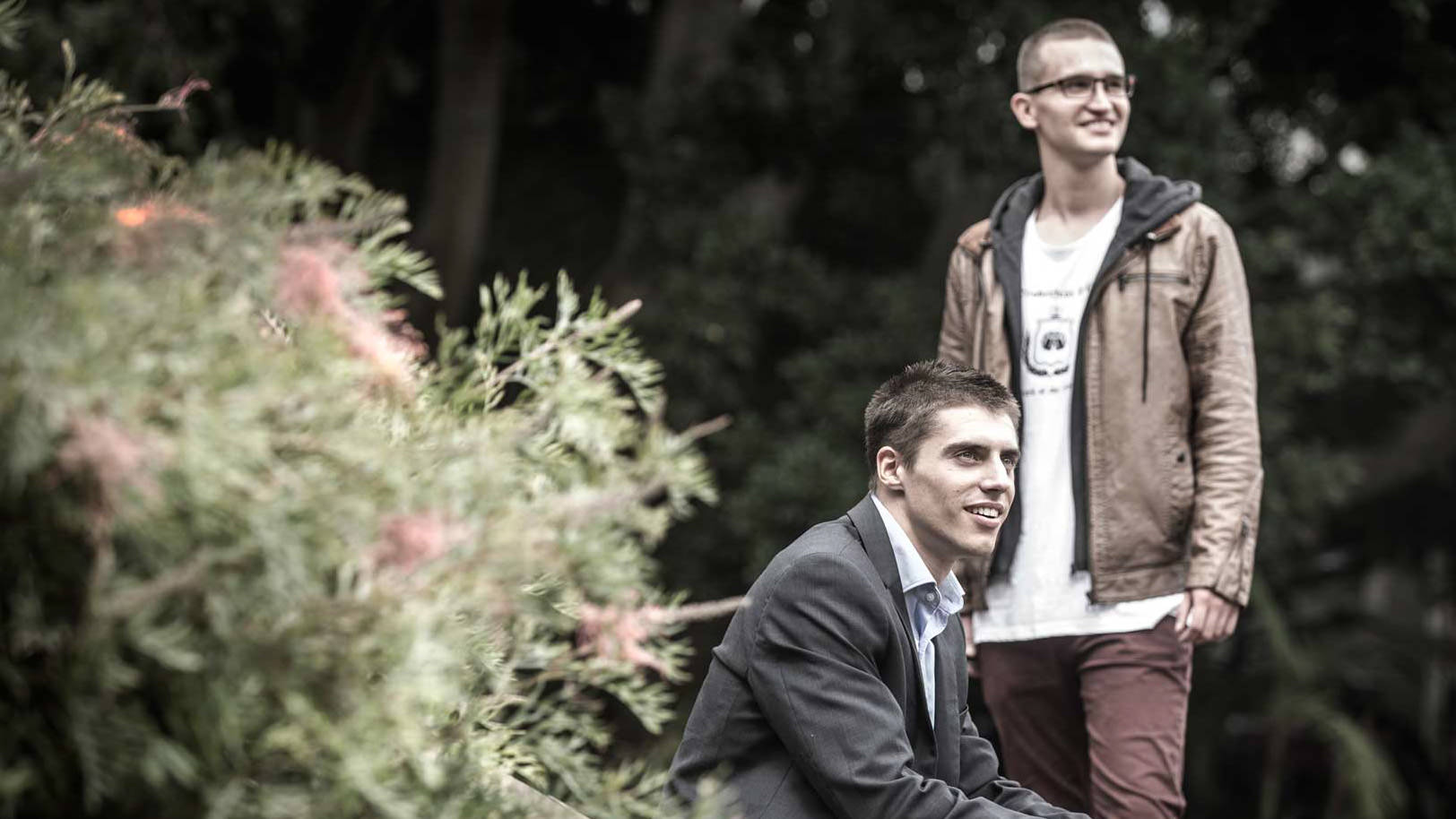 The first trip in February was made up of a small group of engineering undergraduates and one biological sciences student. It was no walk in the park for the young and enthusiastic bunch. Uganda is a country of 37 million people and it's estimated that about one in five live below the poverty line. And despite masses of renewable water sources, the World Health Organization estimates that more than 8 million people do not have access to safe drinking water, due to contamination from poor drainage and unregulated waste disposal.

Mass migration to the capital Kampala is compounding the problem of providing clean drinking water and sanitation. Student Nicholas Kerr, who grew up on a farm in Deniliquin in regional NSW, was "looking for a challenge", and left the farm to take up civil engineering at UOW. He jumped at the chance to be a part of Project Everest, despite having never been overseas in his life.

"I knew my passion wasn't in the technical side of engineering, it was in the project side. And helping people is in my nature so I applied," Nicholas says. "I didn't know anything about Uganda. Andrew called me and asked, 'what do you understand of the work we'll be doing?'. Honestly, I had no idea. I just wanted to see if it would work out.

"When we got on the ground the realisation hit, I'm in Africa, I'm in Uganda. It dawned on me then that it was happening and I loved it from the moment we hit the ground." Also dawning on Nicholas and fellow team members was the realisation of just how big their task was. "In a lot of the disadvantaged communities their water sources are very poor, so much stagnant water and rubbish. That was tough to see and stayed with me. It also made me determined to do what I could to help."

"Being a farmer and growing up in a rural area, I appreciate just how important clean water is." - Nicholas Kerr

Fellow team member Maddison Steele said she had a desire to do aid work abroad and four-weeks in Uganda was a "life-changing" experience for the UOW medical biotechnology student. She says it afforded her the opportunity to develop skills beyond what she learned in a lecture theatre. "I learned how to hold a business meeting, I learned how to pitch a business idea to a board, better leadership skills and how to work as part of a team in intense circumstances," she says.

"The slums were a huge shock. You see it on TV and read about it but you can't possibly understand just how bad the living conditions are and the level of poverty these people suffer until you step into the communities." After completing the first trip to Uganda and undertaking a leadership course with Project Everest's partner organisation Lev5l, Maddison will lead a team in July on another project, in Uganda or possibly East Timor.

"This experience was life changing," she said. "I know I'm a completely different person to the 'Maddie' that went over. I have this drive that's even greater now to go and get other students to experience what I did and at the same time make a huge impact, learn about cultures, about people, and how the world actually works."

Andrew says that rather than march into a community with good intentions and set about doing what he thought would help, the Project Everest philosophy is to identify a need for a good or service and work with the community to create a solution that will last long after the foreign help leaves. "Our role is just figuring out what the situation is are we doing more damage than good. We weren't just giving handouts or telling them what they needed to do, we were going to work with them and it's important we have people who get that process and understand the cultural sensitivity."

That means dealing with local politicians, council members, local universities, and other influential people to help integration and acceptance into a community. The team and the community work together on the best solution with the aim that the community will pay off the costs of the project over an agreed period of time. Community buy-in ensures they understand, respect and own their solution.

"We want to implement something that is actually empowering the community to be working towards making something that will last. If it does break because there's profits being generated there'll be a fund there to repair it," Andrew says. "An example of a social business in a community could be local women making slow sand filters and selling it back to the community providing employment for women and giving the community a means to filter their water to make it cleaner and safer to drink."

Andrew will take another team to Uganda in July, with participation serving as professional experience credit, a requirement undergraduate engineering students have to complete to get their degree. He knows there are more willing, able and talented students like Nicholas and Maddison out there, so he's putting out the call for more students to be part of the project. "The kind of students we're looking for are those who want to make an impact, want to make a difference and are prepared to learn whatever it is they need to get the job done."

[Andrew Vild, UOW Alumni, Director Project Everest]: Project Everest is an organization that believes in the power of enterprise to solve social issues. So rather than give handouts, if we can create a business within a community that provides a good or service and the inherent operation of that business provides that good or service then it's more sustainable than a handout. And so Project Everest involves University students in developing projects and developing social ventures. And then those social ventures develop and involve into something that generates a profit and that profit will always go back into the communities.

[Maddison Steele, UOW student, Faculty of Science, Medicine and Health]: Uganda completely blew all in my expectations out of the water. Um I'm not really sure what I was expecting. I think I was expecting like a savanna like no… no greenery or anything. But the one thing that really struck me about Uganda was how green everything was.

[Nicolas Kerr, UOW student, Faculty of Engineering]: So when we were coming in on the plane, it was incredible actually looking at the window. The landscape was entirely green and we were actually coming in near Lake Victoria. So having the greenness and the water there was really special to me, coming from a country background.

[Andrew Vild, UOW Alumni, Director Project Everest]: So essentially our roll when we get onto the ground is just figuring out what the situation, what the situation is. Is there a place for us? Are we going to be doing more damage than good having, you know, eight westernized foreigners walking into a community? And that's why our process is really important of setting up relationships with the chairman of the local councils. Setting up relationships with the local universities so that, you know, local university students can actually take us through the communities. Part of our process is also getting the scientific facts and data on the situation. So actual water testing results. Do they have bacteria in their water? Do they have abnormal levels of nitrates or ammonia or heavy metals?

[Maddison Steele, UOW student, Faculty of Science, Medicine and Health]: So on the program we started off in Kampala which is the capital city. So we went into the slum communities. There we assess the water, the water quality and accessibility there.

[Andrew Vild, UOW Alumni, Director Project Everest]: Working with the communities is the next step once we've identified a problem. And working with them to identify what solution works best for them financially and what solution works best for them culturally. We don't want to go in there and create a 12 month or an 18 month or a five-year solution.

[Andrew Vild, UOW Alumni, Director Project Everest]: When we went over to Uganda, it's a very bureaucratic place. You have to go through a lot of official pathways. And so because of that we were involved with major government ministries, major government organizations, you know, some of the most prestigious universities in Uganda.

[Maddison Steele, UOW student, Faculty of Science, Medicine and Health]: And the reason why I decide to go in this program, it wasn't so much to get the professional experience that engineering students can get, it was more, um it was more to develop skills that I couldn't get in my lecture halls. I learned how to hold a business meeting. I learned how to pitch a business idea to a board, to an individual. I learnt how to have better leadership skills. I learned how to work in a team in quite a different circumstance, like in a just intense circumstance.

[Nicolas Kerr, UOW student, Faculty of Engineering]: The kind of student that should get involved in this project is someone that's looking for a meaningful act. To undertake this program is more than just volunteering. It's more than just positive sustainable impact. It's about personal and professional development.

[Andrew Vild, UOW Alumni, Director Project Everest]: The kind of students that we're just looking for are the ones that have the attitude that they want to make an impact. They want to make a difference and that they're prepared to learn whatever it is they need to do to actually yeah get the job done.