A house for all

Creating a better way of living for people with dementia

A people-focused approach to building design will lead to better quality of care for people living with dementia.

Getting up to go to the toilet at night and fumbling your way to the light switch, bumping into walls and door frames, might seem like an ordeal for most people. But imagine for a moment feeling constantly lost and confused in broad daylight.

Fear turns to panic when an otherwise normally functioning brain robs a person with dementia of their short-term memory and other cognitive abilities. And what if you could change that by removing the obstacles in the way of decent quality of life for vulnerable elderly people?

A group of UOW researchers proposes to rethink how we design and build homes to improve quality of life for people as they age and address specific needs of people living with dementia.

Alzheimer's Australia reports that there are more than 353,000 Australians living with dementia. With a growing ageing population, that number is predicted to increase by almost one third to 400,000 by 2020.

Given the unsettling nature of the condition and the intensive care required, many older people end up in aged care facilities.

To put the demand for residential aged care beds in perspective, Professor Richard Fleming, Executive Director of Dementia Training Australia, says that to maintain the current level of residential care for people with dementia in Australia, what's needed is 400 new beds per month every month for the next 40 years.

"There isn't a society on earth that can afford that," Professor Fleming says. "So you've got the economic pressure and the moral pressure coming together to tell us that we've got to find a different way of doing this.

"We can't keep putting people with dementia in residential care. We have to make the local communities more supportive."

Supportive living starts with understanding the problem. The question of how living conditions affects dementia came to the fore through a body of research at UOW's Sustainable Buildings Research Centre.

The end goal was to produce recommendations to make aged care facilities more energy efficient, tackling the obvious economic pressures as well as reducing or at least managing their environmental footprint.

If, according to Alzheimer's Australia, dementia care will account for one third of national health and aged care spending within two decades, the impact of the work could be profound. Yet the researchers discovered that investigating energy efficiency led to a range of other questions about health and wellbeing of the aged care residents.

"After reviewing the available literature, I realised that very little is known about the specific impact of some indoor environmental factors, such as temperature, light and noise, on well-being and quality of life of residents living in nursing homes," Federico Tartarini says. He's an engineering PhD student at SBRC.

Before deciding what upgrades to recommend, Federico says he had to take a slightly different approach and determine the impact the indoor environment has on all nursing home occupants.

Over a 10-month period, Federico combined engineering research methods to understand the indoor environmental conditions with nursing methods to assess agitation. He monitored the indoor conditions such as air temperature at an aged care home and carers periodically assessed and rated the behaviours of 21 residents, each living with dementia.

The results show that extremes in temperature increase agitation levels.

"The physical indoor environment is not only a primary factor in providing comfort to the building's occupants, but may even be classified as a non-pharmacological factor in managing agitation in people with dementia," he says.

In short: he found the building itself could be making life worse for the elderly and those living with dementia.

"He's discovered that this connection is actually researchable," Professor Fleming says. "He's shown the graph of the impact of temperature on agitation. It's never been demonstrated before."

Federico admits the project was tough at first, but he has a sense of satisfaction knowing he's working on a concrete project that will enhance the quality of life of many people living in care homes.

"The needs of older people have often been ignored and an element of ambiguity still remains in how to design aged care facilities that enhance their health and wellbeing," Federico says.

"It's not acceptable that just because people with dementia may not have the ability to complain, we accept that some of them live in uncomfortable facilities which may worsen their health and impact on their behaviours.

"They have the right to live in a comfortable environment. The most important lesson that I have learned is that the building is well designed only if it promotes wellbeing and health of the occupants."

Flowers in the desert

Designing buildings that nurture rather than annoy is at the heart of the next step in the gradual process of building a house for all, regardless of age or health condition. For the second time, a team of tertiary and vocational education students will combine forces to design and build a house to enter the Solar Decathlon Middle East 2018.

The Solar Decathlon is an international competition that challenges university teams to design, build, and operate solar-powered houses that are cost-effective, energy-efficient, and attractive. Much like Federico, Team UOW member Clayton McDowell saw the competition as an opportunity to address additional needs in comfort and wellbeing. 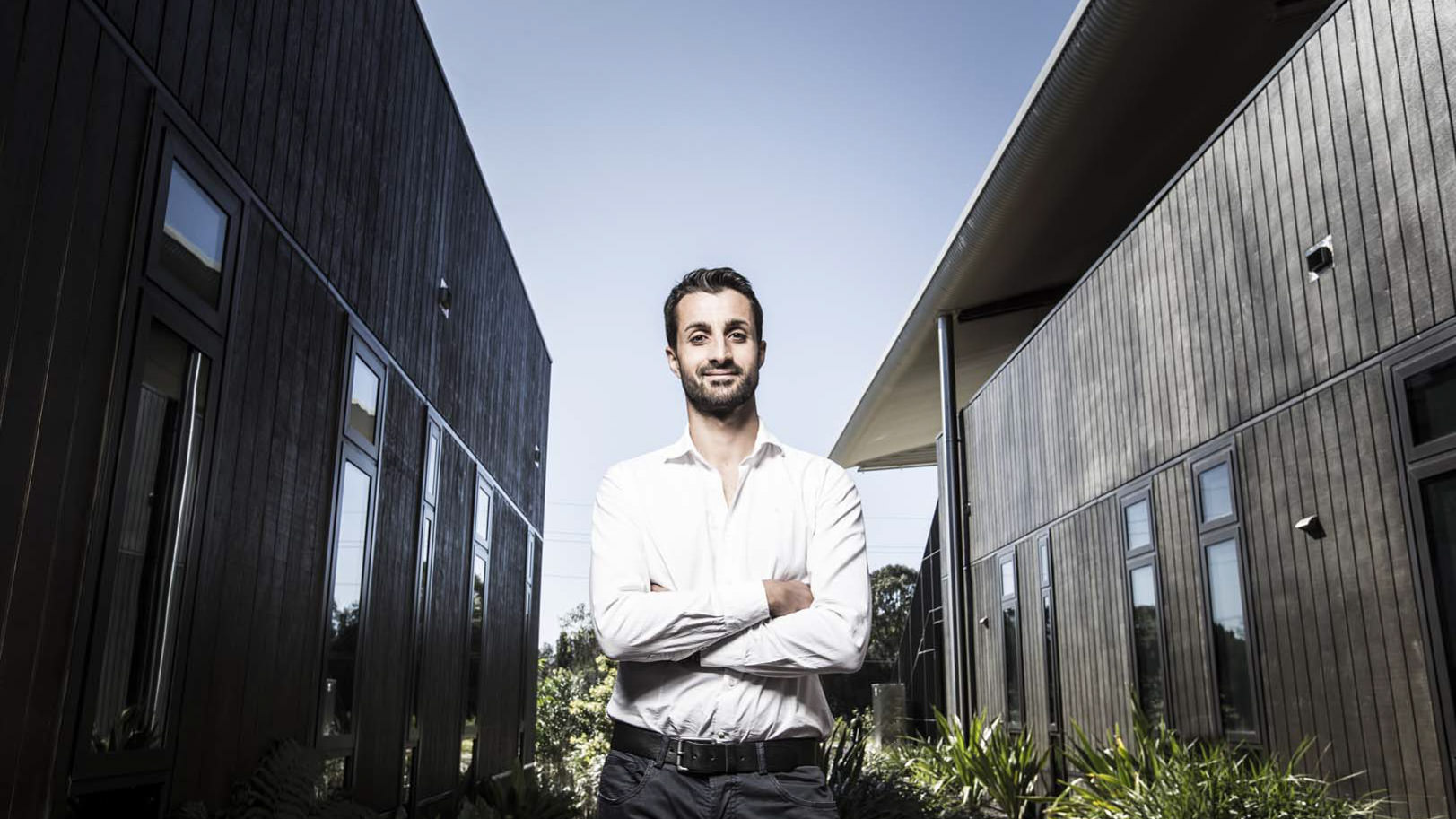 "I was part of a project that involved going out to the homes of more than 200 low-income elderly people and doing audits of the materials used," he says. "We looked at windows, doors, insulation; all manner of materials that gave us an indication of sustainability and comfort levels.

"Throughout the project we kept hearing the stories about how the building affected people's lives and their levels of comfort. For example, one elderly lady asked me if I could leave the window slightly open because she wasn't strong enough to open it when it was fully closed.

"The project lasted two years and unfortunately during the project we saw people who had to be moved to different accommodation as their health deteriorated and sadly one or two passed away."

Clayton says that over time these stories coalesced into a theme and started begging the question: why aren't we designing houses that are suitable for people as they age?

"Even houses that were designed for the elderly, the hallways enabled the turning of a wheelchair but not a walking frame. In many ways, our homes are making life harder than it should be and we could make relatively simple changes that would drastically improve quality of life and wellbeing."

Underpinning the "relatively simple changes" is a set of design principles developed by Professor Fleming, based on his decades of seeing how people living with dementia have been stigmatised.

"There are some things that everybody with dementia needs. We can start with safety. Everybody needs a safe environment," Professor Fleming says. "The trouble is that it usually gets confused with security and people with dementia are put behind two-metre high fences, and the doors are locked, and people describe this as being safe for them.

"It's not safe for them because that makes them depressed. The research is clear about this is when you provide an environment for people with dementia that is safe, in ways that don't confront them."

Then there's the size of the place. Professor Fleming says it's stupid to put confused people with a lot of other confused people. "You've got to get down to perhaps, ten, twelve or fourteen people to give them a chance."

As dementia progresses, people find it very difficult to find their way around. If a person is in a large aged care facility with a central dining room, but their bedroom is down the corridor, around a corner, down another hallway and so on, they won't find it.

"They need to be able to sit in the dining room and lift your eyes open to be able to see your bedroom door, then you can find it. It's what I call visual access," Professor Fleming says. The concept extends to basic functions most would take for granted. 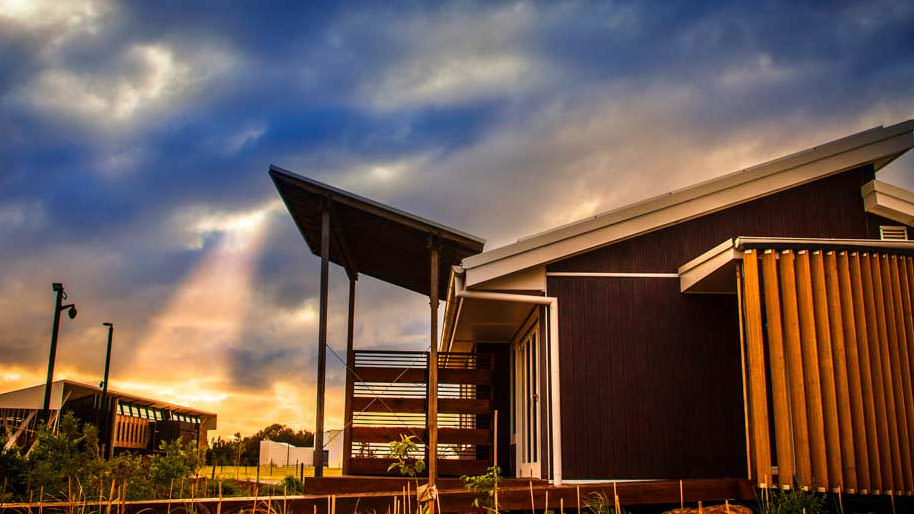 For the second time, a team of tertiary and vocational education students will combine forces to design and build a house to enter the Solar Decathlon.

A person living with dementia who can see their toilet is eight times more likely to use it, Professor Fleming says. And that's a benefit to everybody including the staff. The Dementia Enabling Environment Principles Professor Fleming has developed come out of hard lessons from decades of witnessing the poor treatment of dementia patients in psychiatric hospitals.

"By the mid-1980s, the health department embarked on the de-institutionalisation of the patients in the psychiatric hospitals. But a big blind spot in everybody's planning was what to do with the people with dementia living in the back wards.

"There was no research, there was no technology … nothing. The quality of life for those people in back wards was very, very poor to say the least. What was being done in those psychiatric hospitals was evil. It was evil, and you know, for a quarter of a century, I was driven by anger about that."

In collaboration with registered nurse John Bowles, he turned to the academic literature. They found all of four papers on how to develop and design places for people living with dementia.

"It was helpful but our biggest source of inspiration was really a reaction against what we saw in front of us. If we sought each of us as people and we responded properly person to person, we certainly wouldn't have these problems."

Team UOW have dubbed their house the Desert Rose. A fitting metaphor for the attempt to make the deserts of aged care bloom with new ideas and ways of caring for the vulnerable. The concept for the Desert Rose puts the person at the centre of the design process, following a philosophy that the "architecture celebrates human life rather than itself".

"It's a different approach, rather than going straight into site planning we take time to understand the task by walking in the shoes of the occupant," Clayton says. "It will celebrate life by helping the elderly to live a life of enjoyment in the comfort of their own home for as long as they choose."