When arts graduates Claire Foxton and Matt de Feudis met while working as graphic designers in UOW's marketing department, neither could have imagined the impact the other would have a decade down the track.

“Claire is probably one of the hardest working people I’ve ever met,” says Matt of Claire, now a professional artist.  “She really inspired me when I first started working at UOW, because I thought, ‘if I'm going to survive here, I'm going to have to try and keep up with Claire and that's gonna be really hard’.”

Turns out, the feeling was mutual. Claire and Matt began to share their career ambitions and advice. “Matty is just a reliable, extremely talented, really down to earth, very modest person. It’s crazy to hear him say I inspired him because he inspired me. We pushed each other in a lot of ways with our work and our creative pursuits outside of work.”

With their post-uni careers in full swing, Claire describes their friendship as one that developed during the smaller moments of their work days before blossoming into something with a significant influence on both of their lives.

“Firstly, Matt laughs at all of my jokes, which is a really good quality in a friend.” she says. “But he’s also someone you can have a deep conversation with and not feel weird. We often had our lunches together and our coffees together in the morning and he was just my person at uni.” 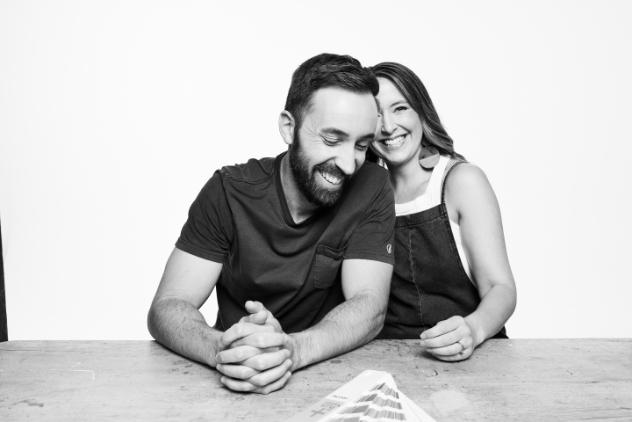 When Claire decided to leave UOW to pursue a full-time career as a professional artist, it had an indelible impact on Matt. “It was a huge bummer. I lost my sidekick,” he laments, as a testament to the impact Claire had on his career thus far. “And it affected my work a little bit too because I didn’t have that person to spur me on.”

“Something that made us gel early was that neither of us were satisfied with the nine-to-five life. I remember when she was starting her murals and was doubting herself a little bit, I’d just say there was no reason for her to doubt herself. Just go for it.”

Since beginning to pursue her art full-time in 2016, Claire's unique murals can be found everywhere from Christchurch, New Zealand to Jackson, Michigan, USA, and even Inverell, Australia. Her unique fusion of portraiture, abstract forms and bold colours has helped turn walls into landmarks, and quickly become community favourites around the world.  Matt has continued to pursue his commercial design career, weaving in more technology-driven forms of work like motion graphics and illustration for a wide variety of clients around Australia.

Despite their divergent paths, the pair still lean on each other for creative and professional support.

“There's definitely overlap because a lot of [Claire's] murals have a commercial bend to them.” says Matt. “We both have different lanes we can travel in depending on the client.”

"I wouldn't be painting murals if it weren't for my design background,” says Claire. “It's been a natural progression for me because I worked at the uni in a team, and that organisational structure helped me talk about meetings, understanding quoting and all that behind-the-scenes work"

Over the past few years, Matt and Claire’s success has operated in parallel with the changing face of Wollongong: from a rough steel city to a new identity as a post-industrial playground that embraces art, design, technology and creativity. With the success of arts-based events like the ‘Wonderwalls’ mural festival, Wollongong became an increasingly attractive homebase in the post-COVID world. Both Matt and Claire credit Wollongong’s gradual change with allowing them to thrive on the cusp of it all.

“Creativity has become a more respected profession,” says Matt. “I think ten years ago the creative industry wasn’t what it is today. People saw it as a hobby, but initiatives like Wonderwalls (which Claire has fed into, because she’s a gun) really help bring creativity into the public sphere and help people recognise that you can make a living doing things you love.”

“It's about risk taking as well,” adds Claire. “If you look at Yours & Owls, or Wonderwalls, they both took on a huge amount of risk. But they’ve completely changed the face of Wollongong and have inspired other people to take those risks as well. It will have a knock-on effect. There are so many talented people in Wollongong who we used to lose to bigger cities. But there’s now so much creativity here and support from other creatives.”

“If you’re a young creative coming out of uni wanting to do something really ballsy, look at what Yours & Owls are doing. Look at what Wonderwalls are doing. It’s about knowing it can be done, and having the support to get there.”

Claire and Matt’s friendship is like it’s own piece of art— thousands of small interactions working as cohesive brushstrokes towards something bigger than the sum of its parts. Their relationship is a quintessential case study on the beneficial connections one makes during a university experience.

“Just take opportunities,” says Matt. “Lecturers will give you opportunities and things to do outside of uni or maybe take on some of your free time to do things. Because I was interested in what I was studying, I would always put my hand up to do those things, which helped me make good connections and get that little bit of extra experience you probably wouldn’t get remotely. That's helped me a lot in my career.”

“That's the UOW effect,” offers Claire in return. “It’s such a good environment for building relationships. The connections you make at Uni are for life, and they always come back around in the form of opportunities and friendships. It’s definitely formed a foundation of who I am as a person, and Matty plays a role in that, as does everyone else I meet there.”

“It's a good place for like minded people,” says Matt in return.