UOW medical students give back

Those were the words used by Gabriella Marriott, Hannah Gibbs, and Lana Morini, students from the University of Wollongong’s (UOW) Doctor of Medicine program, to describe the scenes unfolding on the NSW North Coast, in the wake of the  flooding that devastated communities earlier this month.

Gabriella, Hannah and Lana are part of 10 (MD) final year medical students embedded within the Lismore and Ballina community as part of their year-long rural placement.

Based at hospitals, GPs, and health services throughout the region, the cohort were witnesses to the tragedy that took place as torrential rain pummeled the North Coast in early March. And, during the flooding and its aftermath, which still continues weeks later, they all pitched in to help without a moment’s hesitation.

“We helped with handing out food, organising beds for those displaced, providing first aid, and assisting doctors and nurses at the centres." - Gabriella Marriott

"It was a unique setting with the hospital downstairs and the evacuation centre upstairs.”

When the floodwater began to recede, the students pitched in with the local community to help residents wade through the wreckage and begin the arduous and ongoing job of cleaning up. 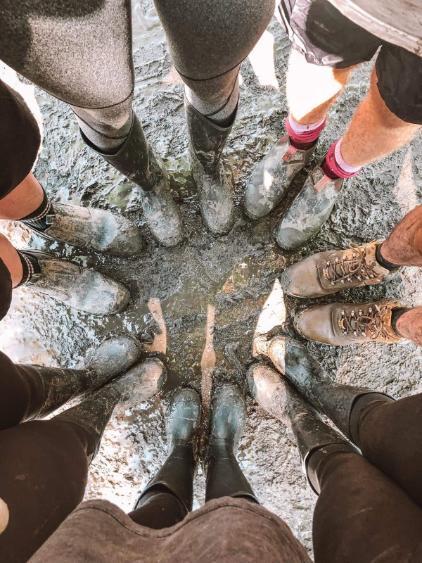 “We banded together and knocked on doors in affected communities south of Ballina, which had been cut off for several days without any assistance. We helped to move heavy furniture, remove soggy carpets, and discard destroyed possessions. It was heartbreaking to see how much had been damaged," Hannah added.

“One of our fellow students also lost their accommodation during the flooding, so we helped to move their possessions, too.”

Rebekah Hermann, Clinical Placement Facilitator at UOW’s Lismore Hub, said she was proud of the way the students dropped everything, and interrupted their own placements, to help in the community.

It highlighted the strong community connections forged during regional placements, and how spending a year in a regional or rural area can be a transformative experience for senior medical students.

“The students have been here since last July and they have really settled in well to the community,” Ms Hermann said.

“I’ve been so impressed by their willingness to not only look after each other, but also the wider community. As the situation was unfolding, they reached out and said ‘how can we help?’. They gave up their personal time and reorganised some  placement and learning activities to do whatever they could to help.

“This whole event has really demonstrated the value of having students integrated into the community over a period of 12 months. Students don’t just get clinical experience and knowledge, they become well-rounded doctors who are an integral part of the community.”

Lana said the students were compelled to do what they could to help out members of the community, although it has, at times, been a confronting experience. They wanted to give back to the community that has welcomed them with open arms.

“It has been soul crushing to watch the flooding devastate so many lives across the Northern Rivers, however, through the heartbreak, a true sense of camaraderie and community spirit has prevailed,” Lana said.

“In the initial aftermath of the flooding in Lismore, we all felt a sense of dedication to this community that we are lucky enough to call home for the year.

“We knew that there were so many communities that would require physical assistance in the immediate aftermath, so we swapped out our stethoscopes for gumboots, old clothing, and sunscreen, and headed out into the mud.

“We thought that that would be where we could help most at this moment in time." - Lana Morini

"It has been quite an eye-opening, challenging, and also heartwarming experience," Hannah added.

“We have seen elderly and frail community members hold onto possessions they hold dear, yet that have been damaged by flood water. We’ve smelled the stench of mouldy carpet. We’ve heard stories of harrowing rescues. And we’ll continue to listen and help in the months ahead as the community rebuilds following this traumatic time.”

Anyone still looking to provide support to the region following the floods, can do so by visiting: www.redcross.org.au/floodappeal/

*On the NSW North Coast, the UOW medical program operates in partnership with the University of Sydney and Western Sydney University as part of the North Coast Medical Education Collaboration.