The (renewable) power of exercise

The future of wearable tech is here, and it’s being built at the University of Wollongong

Imagine charging your phone by going for a run. That’s the concept behind Dr Fatemeh Mokhtari’s project intertwining renewable energy, tech and activewear.

Over the past decade, the wearable technology wave has changed the way we interact with each other, ourselves and fitness. Wearables have become versatile and less obvious, integrating with our daily lives and performance.

Electronic performance and tracking systems (EPTS) were first used in professional sport in 2016 when Leicester City introduced wearables to the English Premier League.

She has designed a new form of wearable through piezoelectricity (electricity generated through mechanical movement.) Piezoelectric wearables have garnered huge attention since they were first innovated by Japanese university researchers in 2015.

"Flexible fibre energy harvesters have attracted significant attention due to their ability to be integrated into fabrics, or stitched into existing textiles,” says Dr Mokhtari.

“However, largescale production of energy harvester fibres using conventional manufacturing processes has been a challenge.”

With her team at the Australian Institute of Innovative Materials (AIIM) at UOW, Dr Mokhtari has created a novel smart fabric embedded with silver-coated nylon that creates an electrical current when stretched.

“We developed these materials and fabricated filaments through an extruder machine to be made in mass production, so it can feed through the different types of textile machines and be produced in different ways,” says Dr Mokhtari.

“The novelty of this is the variation of the textile design, from melt-spinning, knitting, weaving, braiding – giving us the capability of low-cost and high production.” she says.

“My project was to make this electrical conversion more efficient. We originally designed electrical circuits that charged a capacitor. After some running, the movement was enough to turn on an LED. The challenge is to make it as soon as you begin exercising, the movement can charge your mobile phone.”

The role of smart fabrics in healthcare

Wearables aren’t exactly new - early pedometers were used by researchers in the 1900s to quantify links between walking and health, and the first ‘step counter’ can be dated back to a novel invention by Leonardo Da Vinci.

Digital display pedometers hit the market in the mid 1990s, and entered the mainstream in around 2011, when the general population became more interested in tracking their movement.

Dr Mokhtari’s modern design uses these original ideas to work across a range of areas. The smart fabric doesn't just generate power for convenience - signals can also connect to an app that monitors movement which could be used across the spectrum of healthcare.

“The fabrics were put on the knee and recognised the bending of the joint, so can identify if you’re walking or running. It can also recognise how many degrees you bend your knee,” she says.

“If you have just had knee surgery, your doctor will want to evaluate how much you can move your knee and any improvement procedures. After one week you might get ten degrees of movement, then 20 degrees the next week and so on, and you can compare all those signals during recovery,” she says. 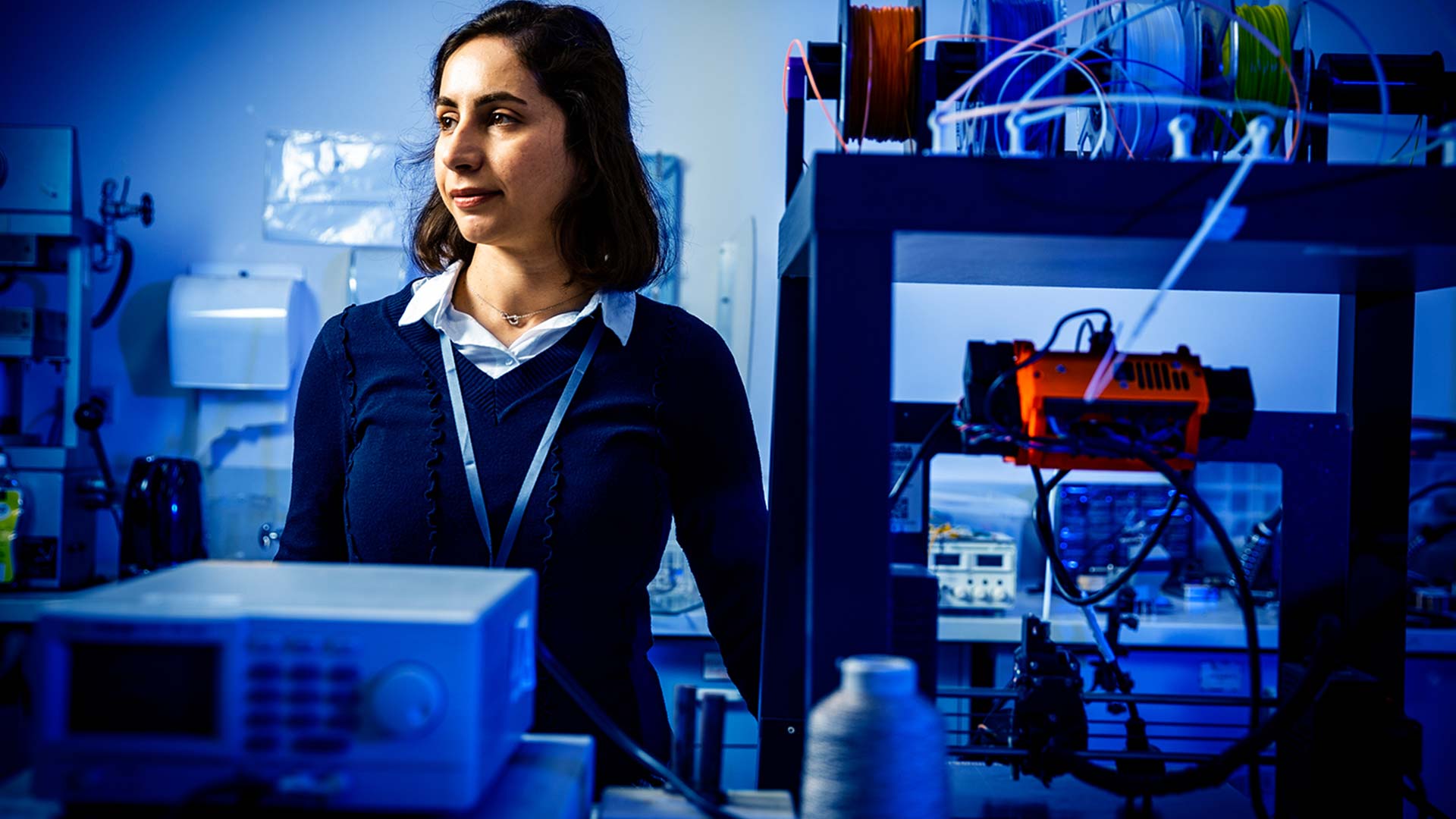 Dr Fatemeh Mokhtari's design can be used in any type of textile machine, allowing for mass production.

The future of wearable tech

Everyday wearable tech is now more popular than ever, with 127 million smart watches sold worldwide last year. Apple has the dominant share of the industry, with their wearables alone bringing in 8.8 billion USD of company revenue in 2021.

Dr Mokhtari hopes her innovation can fulfil diverse applications, including industry-specific workwear and personal use. Her team is currently seeking collaboration with private industry, specifically, in the activewear space.

"There are a lot of challenges: what we make must have high efficiency, a sense of comfort, be flexible, be viable for mass production, and at a low price,” she says.

The design can be covered in a silicone dressing to be wash-proof and sweat resistant, and the currents generate no heat to provide optimal comfort for the wearer.

Dr Mokhtari also has plans to combine the body heat generated through exercise with the current design.

“When you are running your body gets hot, and this heat also can be converted into electricity. We can potentially mix two different types of energy: mechanical to electricity and heat to electricity. In theory, if you went running on a hot day you could generate more electricity,” says Dr Mokhtari.

“We hope this can reach the level where it’s like clothes for everyday people, especially here in Australia where we have an active population. People are already running, walking, biking, and that mechanical movement could charge their mobile phone,” she says.