It’s a business recipe almost too good to be true.

You take three childhood mates;Jared Smith, Dean Martelozzo and Tom Simnadis,  give them a few years at uni to mull over their futures, and ask them to think of a business that would reflect their diverse skill sets. This business recipe started, like all good things do, as a joke.

Having met on their first day of high school in Wollongong, Jared, Dean and Tom enrolled at UOW in very different study areas.

While Dean and Jared were both fairly confident in their respective commerce and science degrees, Tom, still unsure of his future, decided to study both. The double degree was an experiment. “I still don’t know precisely what my purpose was, but it gave me the ability to rule out certain pathways,” he says.

The randomness of that double degree eventually launched a conversation about the inner workings of a distillery. “We were joking around over some drinks that there was never going to be any relationship between his courses,” Dean says. Tom, on the other hand, was completing a PhD on alternate uses of grains and believed otherwise, stating the very vodka they were drinking was made from a combination of raw materials, engineering, and commerce-at-scale.

Listen to the full interview with Jared, Dean and Tom

Jared describes the conversation as a lightbulb moment. “We threw the idea [for a distillery] around and woke up the next day still thinking it was a good idea. If you wake up and still think something is a good idea, then you might be onto something.”

Shortly after, Jared (who had since graduated with a double degree in Science majoring in Chemistry and a Bachelor of Mechanical Engineering) went out on a limb and purchased some distilling equipment. He texted his new business partners their share of the bill, and Headlands Distillery was born.

Inspired by the dual headlands north of Wollongong, which Tom refers to as “humbling,” the trio founded the distillery on a set of basic values; take your time, make it quality, and be sure to give back. While Tom says the early years were made up of “a lot of mistakes, and a lot of luck,” Jared’s recollection is one of hard work by everyone involved.

“I’ve watched Tom put in a 23 hour day and then wake up an hour later and do another full day. We had this hard work mentality that we were never going to give up. It wasn’t a question of whether we’d be successful or not, but rather how many hours of sleep would we need to lose to get there.”

As one of the few craft distilleries in the area, Headlands drew inspiration and unique ingredients from the south coast to create something no one else could. “We’re all perfectionists, so when it came to the product it had to be of that level,” Dean describes of the five year process it took to produce their very first bottle. “There are six and a half thousand native botanicals in Australia. We use ingredients people haven’t tasted before; we have a whiskey coming out from the Illawarra Plum barrels which is something no one else is using.”

“We just have a really amazing culinary experience we can share with the rest of the world,” Jared adds.

The distillery is committed to giving back, both on and off the production line. Tom explains  how they’ve tweaked the distillation process to be more energy efficient, while also sponsoring the UOW Women’s AFL team and sending 20 per cent of their profits to SpinalCure - a cause important to the partners after Dean broke his back in a snowboarding accident some years prior.

“We’re always looking at how we can offset the less positive aspects of our product. We placed a strong focus on things like a bottle recycling program; we don’t use any plastic in our production; we’re looking into incorporating more solar power; we give leftover grain husks to our local farmer as cow feed. Jared has even designed a super efficient water recycling system so we don’t have to re-heat water. Not only does it benefit society, but it also benefits us as a business by reducing our costs.”

“We were also one of the first distilleries to start making hand sanitiser,” Dean says. Jared re-engineered their distillery equipment in the early stages of the pandemic to meet demand. “It was kind of horrifying. We had doctors and nurses and paramedics coming in asking for it because no one had any available. But we were proud to be able to quickly turn the spirit production off and use that alcohol to keep the community safe.” 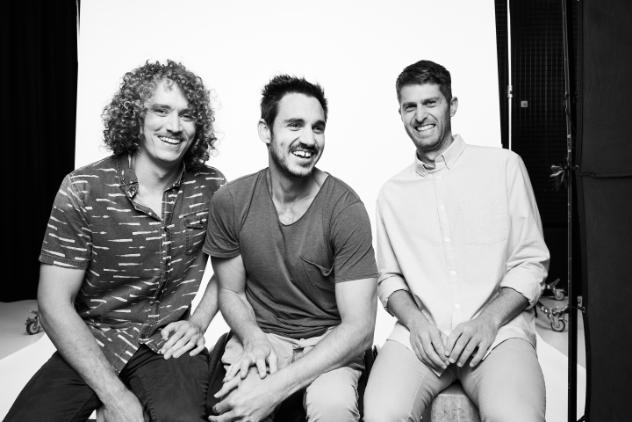 Tom can talk at length about traceability, product cycles, market behaviours and economic motivators. He’s even gone as far to deliver a bottle of vodka to the grain farmer who helped produce it. But all three agree, as Wollongong changed over the past decade, Headlands Distillery grew to fill a gap in the market.

“There was a growing frustration where people wanted locally made things. Local music, local drinks, local products,” Jared says, noting that while they routinely sell out of spirits at their current production capacity, 96 per cent of all spirits sold in Australia are imported—and the future is bright. “What if that was 50 per cent? There’s no way we could supply that.”

“Success is a moving target,” Dean says of Headlands’ never-ending ambition. “I remember when we sold our first bottle of vodka, we thought ‘wow, we’ve been able to sell something,’ now let’s sell a hundred. Then you sell a hundred locally, so you try and expand your geography. I don’t know if we’ll ever be satisfied, but we’re always looking to grow and build our presence, and that really drives us.’

Looking back on their years at UOW, Dean, Jared and Tom attribute their time on campus—including the uni games, ski trips and parties—as formative to their business and characters.

“Without being here and still seeing [Jared and Tom] every day at uni, then I don't think that we still would be as good of friends as we currently are. I’m really stoked we could turn that into a business.”

“When you go to other universities, the campus is spread all over a city. You might be studying science, but you’d never run into someone studying education,” Tom adds. “UOW is a melting pot so it really broadens your perspective and lets you meet people you otherwise would not have interacted with.”

Plus, the group stayed true to the most important part of Headland’s ethos: put friendship above all else.

“It’s good that we have a group business partners because if it were just two, we’d drive each other crazy,” Jared laughs. “We can cast a vote, and there are no hard feelings on business decisions. That helps us stay friends outside of the business.”

“We started with a really strong core, so no matter what happens, we still remember what it was like to be friends,” Dean says. After all, the three have known each other longer than they haven’t. “We don’t always share opinions, but at the end of the day, we're friends and the business will never get in the way of that.”