“The first day is always the most nerve wracking.”

Kristen Patchett, Antonia McInnes and Natalie Piucco each stepped into their very first class with the question that fills the heads of new students everywhere—will I make friends here? It turned out they were each other’s answer to this very question.

“I remember looking around the room, seeing Kristen sitting there and thinking ‘yep, you look fun. Let’s chat.’ So we started chatting,” recounts Antonia, mimicking almost word-for-word separate recollections from both Kristen and Natalie on their first impressions. After sitting next to each other, the three immediately found common ground. This kicked-off a personal and professional friendship that defined their early years on campus.

“We tried to pick our subjects together and tried to do as many group assignments as we could together, which never worked because they were always selected at random,” says Antonia, who lived in student accomodation while Natalie lived off-campus and Kristen commuted from Cronulla, in Sydney’s south. "But we would study together and make sure to pick our class days together so we could support each other through our courses.”

Each of the friends’ unique personalities and strengths complemented the others’. The trio parlayed this synergy into academic, social and professional success. “Although we met through uni, our friendship had so many more connections than we realised. It was just waiting to be unraveled,” adds Natalie. 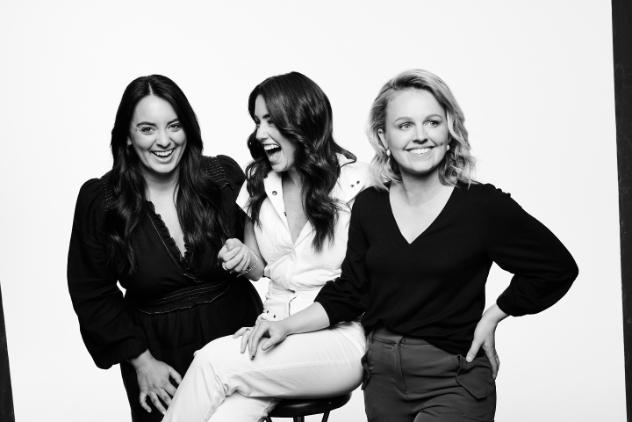 “In a sense, there is a north star for all of us in focusing on where the world is heading, and we’re all working on different parts of that,” says Natalie, describing their combined science, technology, business and creative lenses as ‘different pieces of the same puzzle.’

“Antonia is the most unbelievably organised human, she’s so well connected and so deeply trusted. Kristen is like the light, she’s on a huge trajectory. And I suppose I am the blue sky thinker, the person thinking about the art of the possible.”

Like any other professionals pursuing a career in a trail blazing new industry, Antonia, Nat and Kristen have overcome challenging obstacles and embraced wild new opportunities. Most importantly, each of the three are quick to credit one another at every opportunity.

“They’re really special girls in my life,” says Antonia. “We’ve all been champions of each other's success. In some long-term friendships, there might be an element of competition or jealousy. But we’ve always pushed each other to find that next step, and been really proud of each other when we’ve reached it.”

“It’s crazy that the two people you meet in your first class you end up being friends with eight or so years later. And we’re still best friends,” adds Kristen.

Students walking into their very first class at UOW would do well to gather a few bits of wisdom from this trio’s story of friendship.

The first is the value of the connections you make throughout your time at Uni. “As we get further into our careers, you definitely notice people who were in the course with you,” says Antonia. “I’ve re-met contacts with whom I studied; one in particular who I am now planning her wedding with, and we would never have had that relationship if it weren’t for that initial connection from uni. At worst, it’s an icebreaker. At its best, it’s what the three of us have now, with different skill sets that complement each other in unexpected and different ways.”

"Everything that I do in my role is based around relationships," adds Kristen. “I never would have imagined myself working so closely with a CEO of a nuclear science organisation, but once I’d crossed over to ALDI, having access to those former networks allowed me to cooperate with people at all levels."

Another lesson is learning what you uniquely bring to table, and how you can use that to help those around you.

“Authenticity is the most important thing for connecting with people and groups and classmates and sporting teams or whatever you’re interested in,” says Natalie.

“I think students will feel that anyway at UOW. There is a lot of natural authenticity built into the environment. It isn’t just one building, it’s a campus which allows you to have those kinds of natural interactions. Whether it’s sitting around on the duck pond lawn or at a cafe for a few hours, there’s a lot of room for you to grow into yourself and meet people with common interests and make genuine long lasting friendships.”

And lastly, it’s wise for students and alumni alike to remember to keep these connections close, because these very friendships tend to pay dividends when you least expect it.

“If we didn’t go to uni, I don’t necessarily think we’d have met in any other setting,” says Kristen. “Without having shared those three and a half years at uni together, we wouldn't have formed those memories, that knowledge, and those insights that helped build a friendship that's lasted eight years.”

“We’re all very different people. But they’re the kind of friends you want on your side.”