How to choose milk for yourself and the environment

What UOW experts say on the best milk choices for personal and planetary health.

The acceptance of alternative milk in Australia is booming, with plant-based products equating seven per cent of milk consumed and the industry worth around $230 million in 2020.

While soy milk long held the top spot since its 1970s entry to the Australian market, almond milk has recently taken over as the drink of choice for non-dairy drinkers.

Professor Eleanor Beck is Discipline Leader in Nutrition and Dietetics in the University of Wollongong's School of Medicine. She says almond milk is not necessarily the super-drink it has been marketed as.

“I would argue that the reason to have dairy products in our diets is to ensure adequate protein and calcium. While soy milk is closer to mimicking cow’s milk, almond milk is very low in protein. It’s also low in carbohydrates and therefore often has sugar added to make it sweeter,” says Professor Beck.

“While there’s no issue in having almond milk in your coffee, be aware that you're not getting the same nutrition that you might be getting if you had a dairy milk. It is important to ensure that the almond milk you consume has added calcium.” 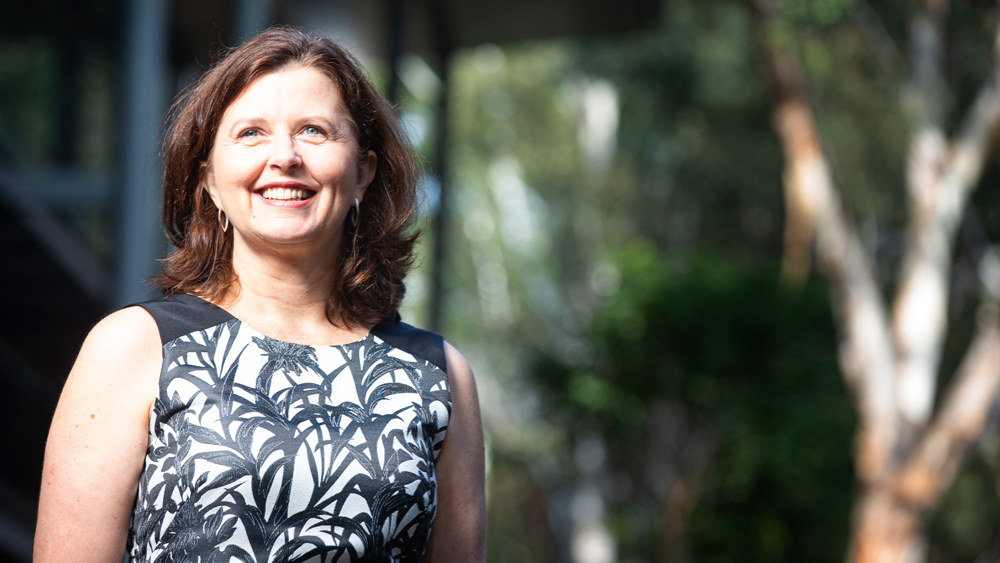 Professor Eleanor Beck is Discipline Leader in Nutrition and Dietetics in the University of Wollongong School of Medicine.

The rejection of dairy can be linked to health, environmental and ethical concerns, and has led to an array of alternative options, from macadamia, to rice, to pea milk.

“Individuals will jump on any trend that they think is fashionable or healthy. We actually have healthy eating guidelines in Australia, and they encourage people to eat a wide variety of foods,” she says.

“The National Heart Foundation recommends that if you don't have existing high cholesterol or a history of heart disease then it's okay to have full cream milk in a balanced diet. If you do have some of those problems, then you should choose a low-fat milk.”

As a general rule, Professor Beck says that dairy milks provide the best nutritional value. However, for people who choose not to drink dairy, soy has more health benefits than almond milk, due to its similar protein content to dairy milk.

“It’s complex because we probably didn’t always have cows, and we didn’t always evolve drinking cow’s milk. But if we look at a balanced, healthy diet, especially looking at growth and bone development, evidence shows that children who don’t consume cow’s milk or a relevant substitute tend to have poor growth,” says Professor Beck.

“If you look at even just a hundred years ago, you would see children suffering from rickets from insufficient nutrients (especially Vitamin D and calcium) from not having enough dairy foods in their diet. This disease is still seen in countries with insufficient food and nutrition resources for their young.”

So, the key message is, that whenever you remove any food from your diet, especially an entire food group, you do need to replace it with something, and that may not be the products that are marketed as healthier or better for the environment.”

Professor Karen Charlton, also from UOW School of Medicine, is a dietitian and public health nutritionist with a research interest in dietary patterns for both personal and planetary health. She says as the world population is estimated to grow to nine billion by 2050, up to 100% more food will be required, but will need to be produced within finite environmental resources. 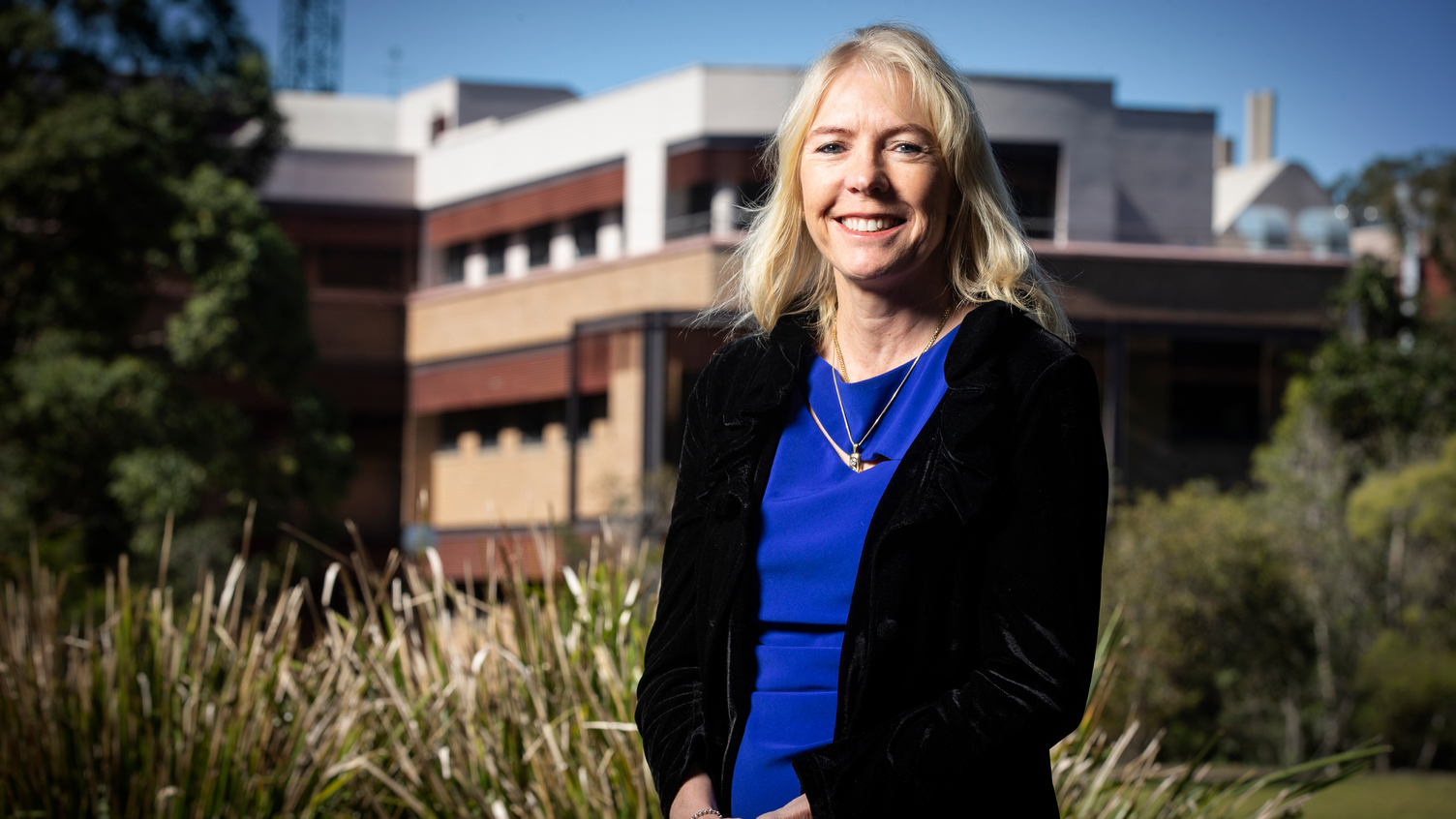 Professor Karen Charlton says there are plenty of factors to consider when choosing a plant-based milk.

“We will need to become much more careful in our choice of foods, including paying attention to how foods are produced. It is becoming increasingly clear that a great food transformation is needed to disrupt current food systems that are not environmentally sustainable. Consumers will need to change their diet-related practices to be healthier and more sustainable, to drive transformation at each phase of the food supply system,” says Professor Charlton.

“It is complicated and there is currently no way that consumers can make a judgement how to compare different types of foods, such as in the case of milks. There is no doubt that reducing intake of animal-derived foods, especially red meat and dairy, and replacing them with plant-based alternatives would be good for the planet.”

Professor Charlton says that in the case of dairy, cow’s milk has a heavy environmental footprint.

“This is because dairy cattle require a lot of water and use large areas of land for grazing, as well as releasing methane into the atmosphere. However, there are still plenty of factors to consider when choosing a plant-based milk." 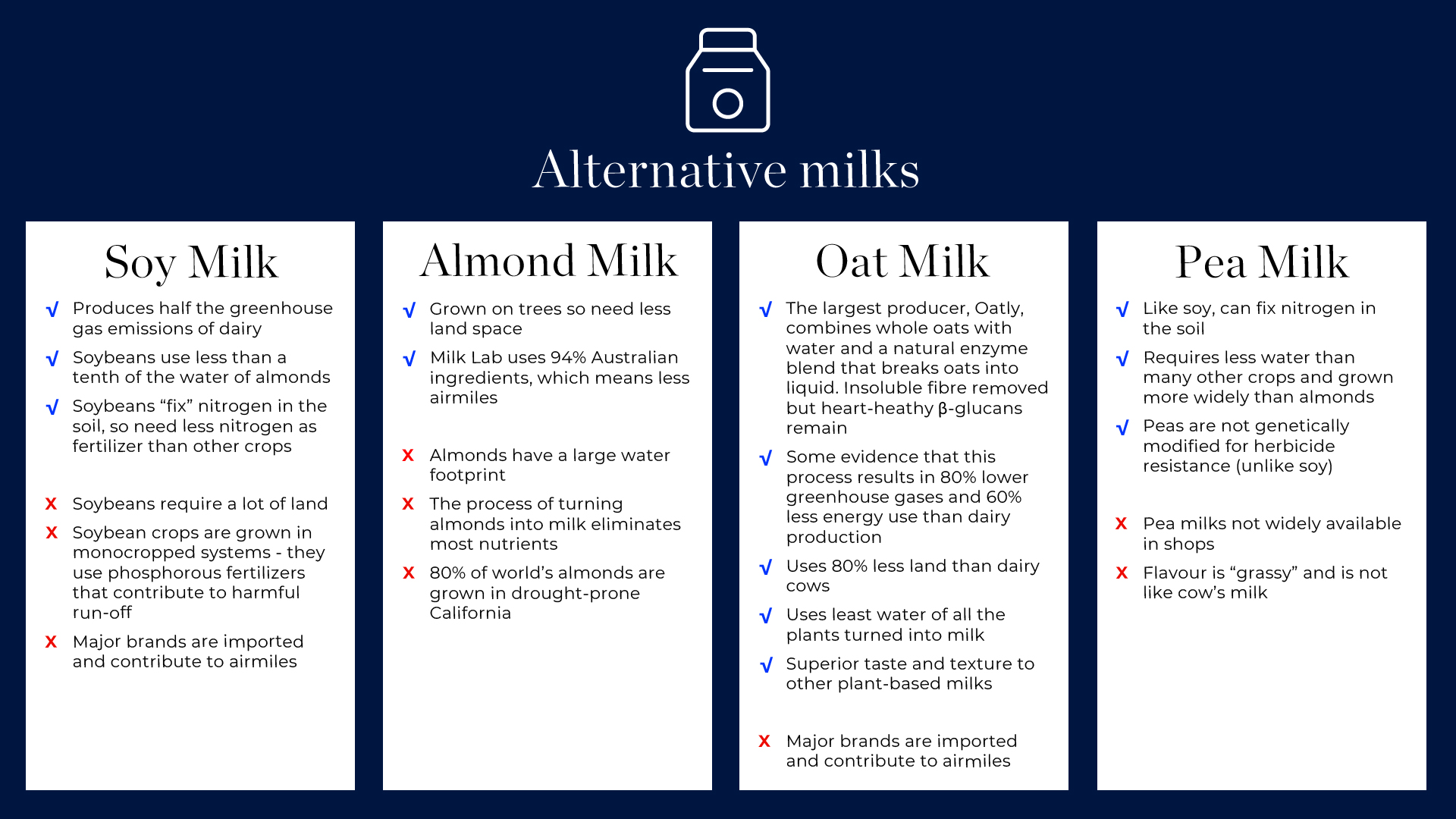 So, what should we be drinking?

While plant-based milks are better than cow’s milk for environmental impact, it is quite a different case for nutritional content.

“There is really no plant-based milk that naturally provides the same level of nutrition as dairy. For example, a 200ml glass of milk will provide seven grams of protein, compared to just a little less in soy (six grams), but only approximately one gram of protein in oat, almond and rice milk,” says Professor Charlton.

Considering nutritional content alone, Professor Beck says dairy is best for anyone who can drink it.

“However, if you were to choose an alternative milk for health or lifestyle reasons, make sure that what you are drinking is a brand that has added calcium and vitamin B12, so you are still getting those nutrients.”