All you need to know about Evil Duck.

In the dawn of time, around 2000 to 2007, there lived a Muscovy Drake in the kingdom of UOW. This duck, unlike his fellow ducks who still to this day attempt their raid on Subway, took pleasure in terrorising the staff and students of UOW. He was known as the UOW Evil Duck.

Evil Duck did not fight for food but demanded it, demanded chips and sandwiches to those who dare loiter his domain: the Duckpond Lawn. Failure to comply with this tyrant resulted in attack. Yet, despite his ruling of the Duckpond Lawn with his feathery wings and webbed feet, Evil Duck collected quite a fan club within the student body. Evil Duck’s antics had become one of the very characteristics that draw students and faculty to the lawn.

According to legend, Evil Duck started as a spoilt pet who was brought to UOW when he had become too demanding of his residential roommates. Legend has it that on a particular occasion Evil Duck was snuck into the Wollongong Campus Library for some bellowing mischief.

The reign of Evil Duck wasn’t to be and only several years later the Muscovy Drake had vanished from the kingdom of UOW. Students at the time reported that his absence was obvious to anyone who spend a considerable amount of time on this portion of Wollongong campus. Though no evidence of his death was found, it is surmised that the duck who had become the very spirit of Duckpond Lawn had faced his final battle and reached his final rest.

A duck shaped hole had grown in the hearts of staff and students after the passing of the great Evil Duck. His demanding company was severely missed, and the absence of his nippy trickery had forever altered the experience of student life on campus. Students took to social media to create a tribute with a group titled ‘In loving memory of the UOW evil duck’. The Facebook page serves as a meeting forum for students to come together to remember the tricks, nips and demands of the Evil Duck who will always remain in their hearts and minds.

The staff too took to memorialising this creature of their hearts. The vice-principal at the time, for instance, commissioned steal and ceramics artist Didier Balez to construct a sculpture to honour the memory of Evil Duck. Balez laboured for three moons to shape and perfect his sculpture to be worthy of an appropriate memorial for this big duck on campus. To this day, Evil Duck in sculpture form enjoys the paradise of his territory at Duckpond Lawn. 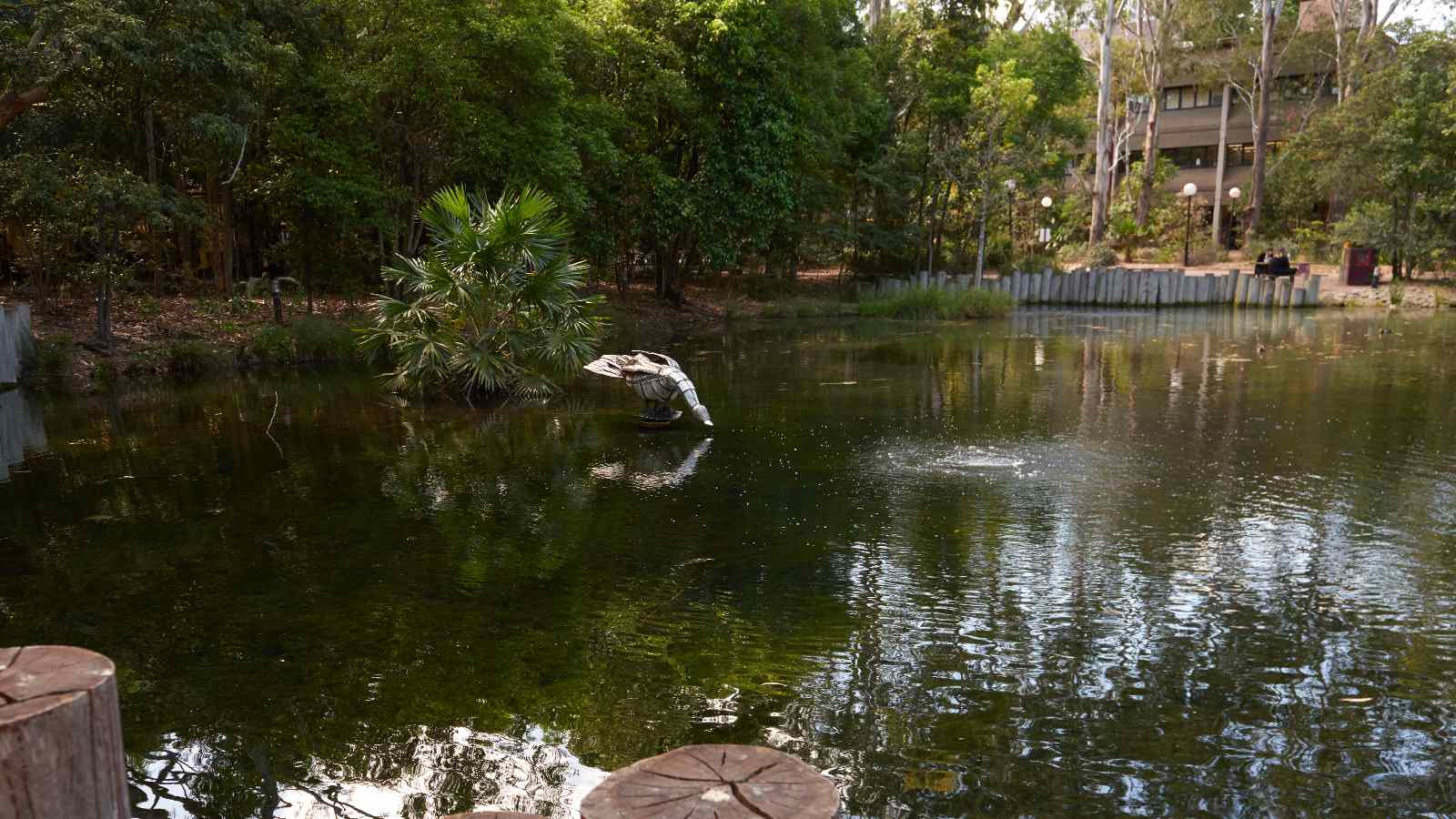 Evil Duck sculpture in the duckpond on campus.

Baxter started his life as a mere concept in the mind of the same vice-principal, Chris Grange, who had commissioned the Evil Duck sculpture. Baxter would fill the hole left in the hearts and minds of the students and staff. Like Evil Duck, Baxter would have a craving for snacks, be cheeky and full of trickery. Baxter would bring back the spirit that had been lost to the kingdom.

To name the new spirit of the Kingdom, UOW asked students for their submissions, and with over nine hundred votes, the name was decided on. The namesake had been given to the new mascot of the kingdom of UOW to pay respects to Sir Philip Baxter who was significant in building the foundations of the kingdom of UOW. While the physical appearance of Baxter was inspired by everyone’s favourite Muscovy Drake, there were a few liberties taken to bring out the cheeky sass with fluffy feathers and a spiky fohawk. Then there’s the bright red ninja style bandana around his head, ensuring Baxter is always ready to bring mischief back to the Duckpond Lawn. 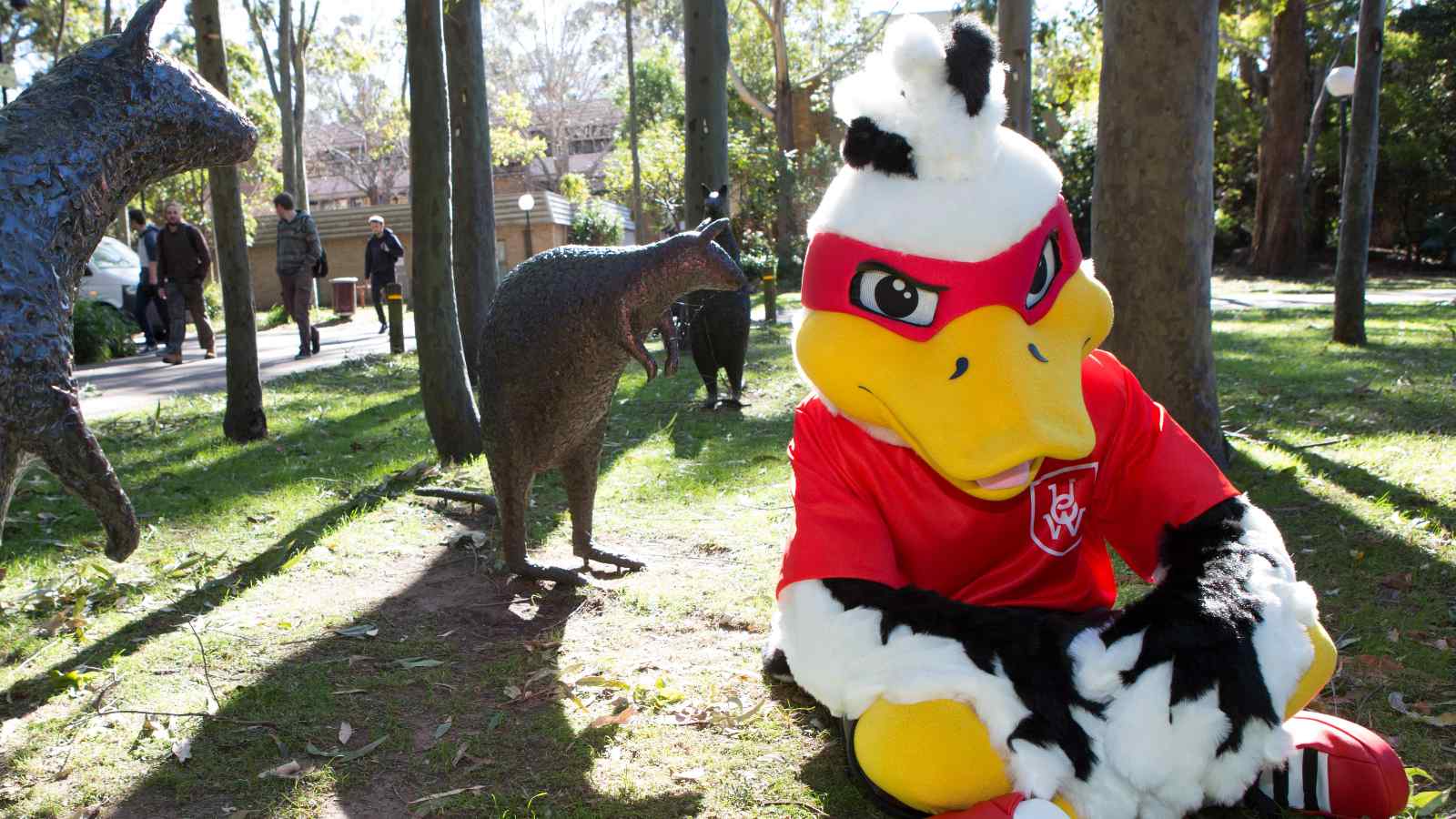 Since then, Baxter has been actively involved in on campus life entertaining current students, past students and future students at open days and orientation weeks. He has become a massive supporter of various sports and Uniclubs on campus and his dance moves are those to rival the legend of Evil Duck. His antics have, on occasion, earned him the spotlight in local online newspaper articles outlining the cheeky duck at the kingdom of UOW. All of which is hungry work, so in his spare time Baxter happily shares his top snack tips to social media.