The fibre aiming to treat illnesses without drugs

In just two years, University of Wollongong researchers have developed a ground-breaking fibre which could mean a future without drugs.

The fibre offers an unprecedented chance to listen to never-before-heard conversations between our vital organs and the possibility of huge changes to the way epilepsy, diabetes and many other conditions are treated. So, what could be achieved in another 12 months?

Majority of the time when we get sick, we take medications to feel better. Most of us have visited the chemist at one time or another to pick up a prescription or some over-the-counter relief when we're feeling lousy. From winter colds and migraines that simply won't go away, through to more chronic conditions, such as epilepsy, heart disease and diabetes, pharmaceutical drugs play a significant role in our ability to tackle illness and promote wellbeing.

Modern pharmaceuticals are a part of our society in a big way. In 2015-2016, Australia spent $20.8 Billion on medicines. But have you ever considered a world where chronic illnesses can be treated without a reliance on drugs?

A world without drugs?

For University of Wollongong Distinguished Professor Gordon Wallace, it's questions like these that fuel his determination to contribute to improved health and wellbeing outcomes through his research.

Distinguished Professor Wallace is the Director of the Intelligent Polymer Research Institute (IPRI), a key research strength at UOW, and he is internationally recognised as a leader in electromaterials research. IPRI is filled with biologists, clinicians, chemists, physicists and engineers, working together designing, discovering and developing new materials.

IPRI is also the headquarters of the Australian Research Council Centre of Excellence for Electromaterials Science (ACES), which Distinguished Professor Wallace is also the Director of. The Centre is charged with translating fundamental discoveries in materials science into the next generation of devices to improve people's lives, particularly in the health space.

"While pharmaceutical drugs have revolutionised the treatment of a multitude of conditions, we also know that there are definite side effects, as we can't control or limit the delivery of the drug to a specific area - we flood the body," Distinguished Professor Wallace says.

"Over the past five years, we have taken our research into the world of electroceuticals with the plan to utilise our new material developments and additive fabrication techniques to develop implantable structures that can monitor, maintain and restore function in neural tissues." 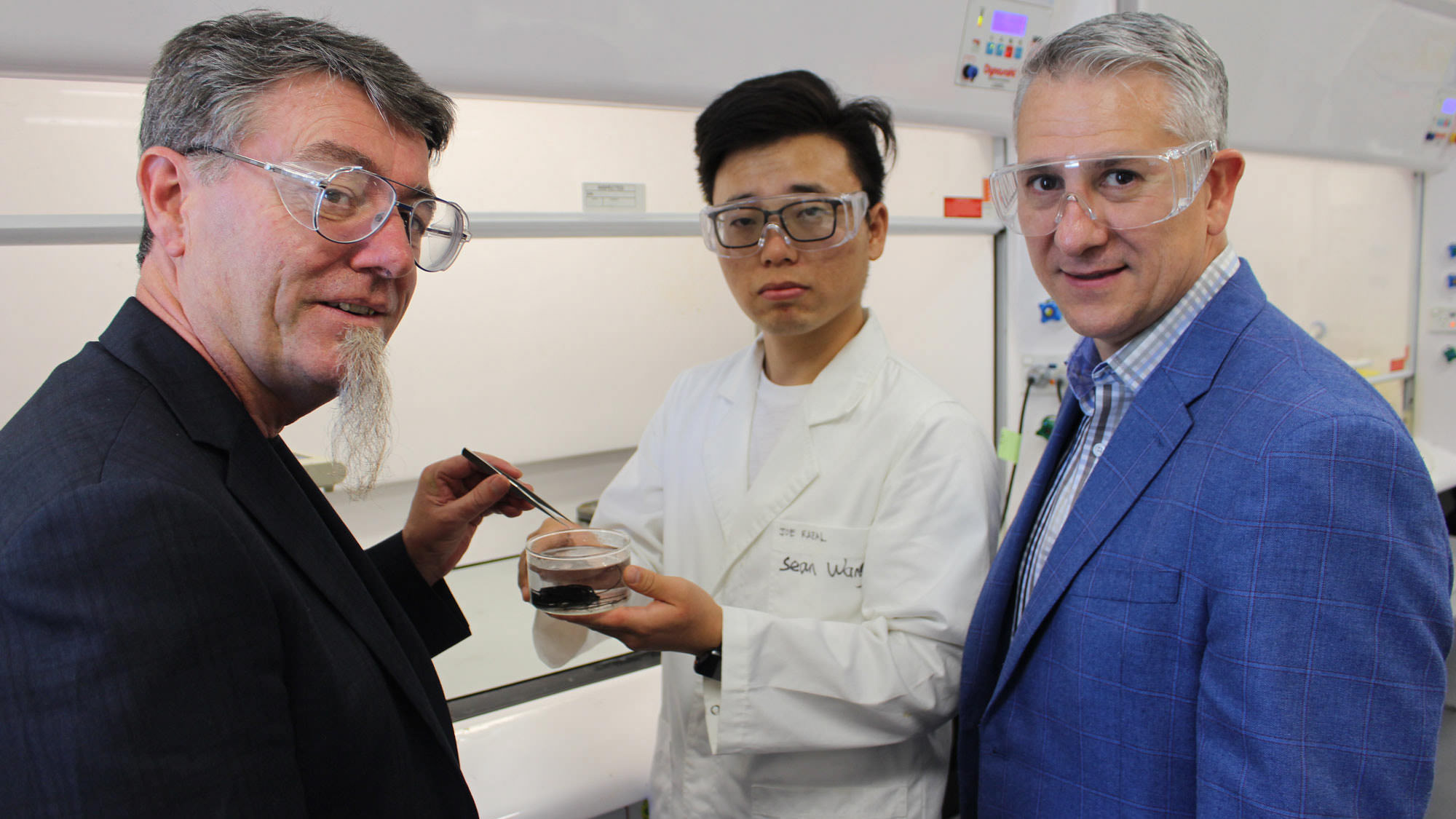 Electroceuticals has become a hot topic of research in recent years. It focuses on creating treatments with minimal invasion and side effects. Researchers are working towards the ability to administer electroceuticals (electrical impulses) that target specific neural circuits in body tissues and organs affected by an illness to improve performance.

One of the main limitations in electroceutical research to date has been the fabrication of suitable implantable electrodes. Currently, electrodes are created using everyday materials, such as metal, making them inflexible, potentially damaging to the nervous system and limiting the effectiveness of electrical communication with the nerve and overall mapping of the body's neural circuitry.

"We come up against roadblocks every day in research - if we stopped, turned around and walked away, we could be in a world where the cochlear implant was little more than a dream, polio may still affect our children, and we could be extracting infections with leeches."

With a never say die attitude and a multi-disciplinary team of experts, UOW researchers use a traditional wet spinning fabrication method to manufacture a new, novel fibre to overcome the current limitations in electroceutical research. In wet spinning, a dispersion/solution is converted into a continuous solidified state - the fibre. Picture your favourite clothing factory, laid out with knitting equipment and large spools of fibres and yarns, but rather than cotton and polyester, the IPRI team use carbons and solvents to spin a ground-breaking fibre they have named the 'sutrode'.

The sutrode combines the electrical properties of an electrode with the mechanical properties of the suture to produce a fibre that is ultrathin (half the diameter of a human hair), strong, flexible and maintains electrical properties. The fibres have demonstrated significantly improved electrochemical activity within nerves, and are stiff enough to penetrate soft nerve tissue, yet flexible enough to accommodate for micro-movements once implanted, giving surgeons the ability to communicate with the nervous system in an unprecedented way. 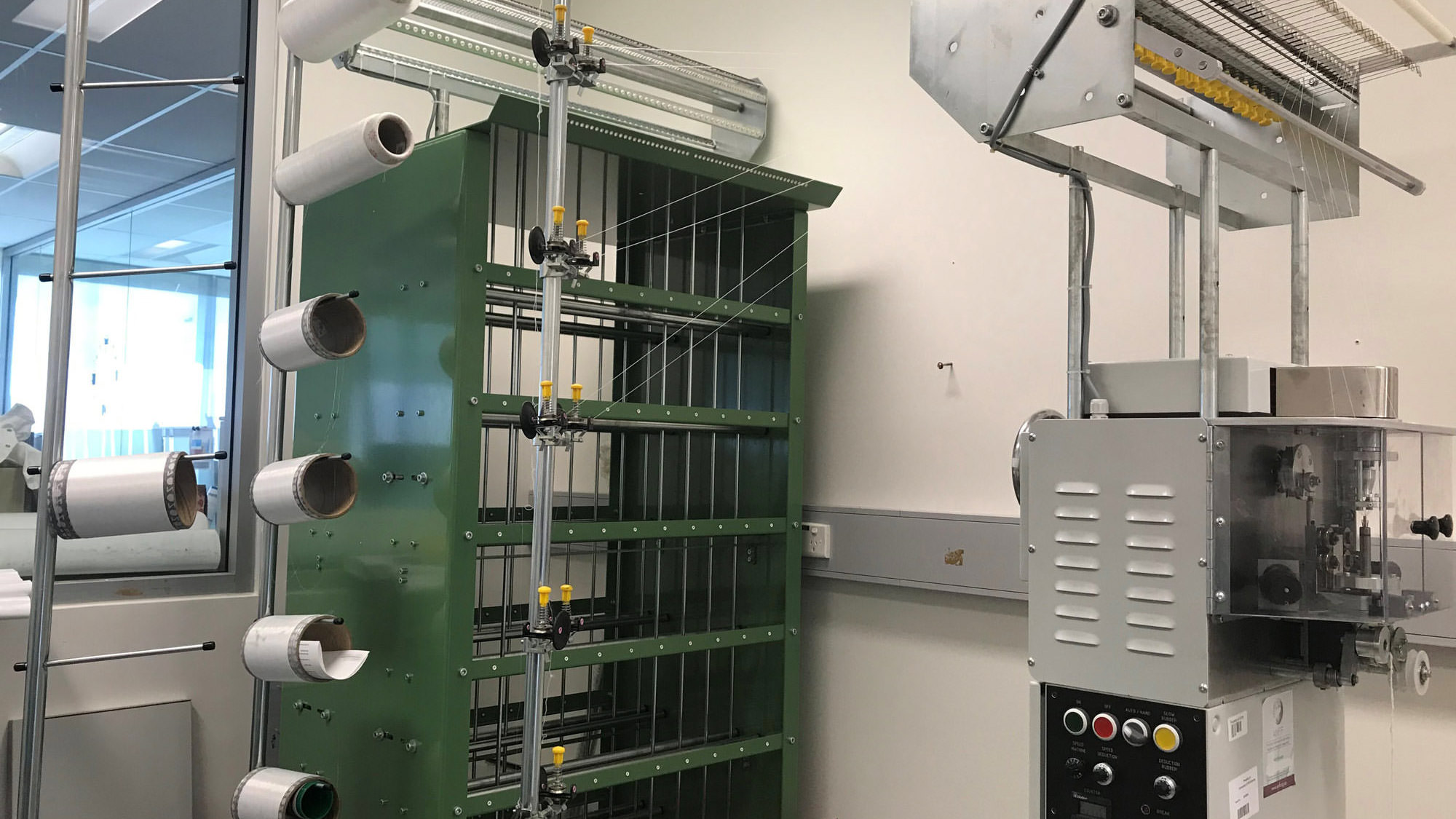 Researchers use fibre spinning fabrication methods to manufacture the sutrode.

"The not-so-secret ingredient in the sutrode is graphene," Distinguished Professor Wallace says.

"We know graphene has remarkable properties, and we've been working to develop chemistries to enable the creation of useful structures that retain its amazing mechanical, electrical and biological properties.

"We've long held a vision that graphene could be used to enable better electrical communication within the body, and the sutrode has shown that this is possible. We've developed something that is truly ground-breaking and offers opportunities that may not be possible within pharmaceutical treatments."

So just how big a deal is the sutrode?

"It's a pretty big deal," says Prof Mario Romero-Ortega, a Neurosurgeon from the University of Texas, Dallas, who is collaborating with UOW on this project.

"Researchers in Wollongong have created an advancement never before seen in electroceuticals. The sutrode provides unprecedented spatial control in the electrical stimulation of nerves, which is crucial in effectively stimulating specific nerves, as well as unprecedented sensitivity in recording these signals."

"Just as computer hackers sneak into our networks, we have the chance to listen to never-before-heard conversations between our vital organs, meaning we can better map the neural circuitry of the body. The sutrode is our microphone that will help us better understand the language of our organs."

For researchers and clinicians, being able to listen in to how vital organs talk to one another creates opportunities to compare signals of a healthy organ with one that is suffering from a pathological condition, and then adjust the neural signals of the diseased organ to behave like the healthy subject using electroceuticals (that is, without drugs).

The future looks (and sounds) bright

When you sit in a room with Gordon and Mario, you can feel the energy, the buzz, as they remark on the exciting possibilities the sutrode offers for electroceuticals and beyond. Cardiac activity, hypertension, obesity, epilepsy - the list goes on.

Already Mario has tied the sutrode around fine bundles of nerves in the spleen that have never been accessed before to gather intelligence for the treatment of diabetes.

"Can it be used to help damaged nerves reconnect, or help nerves and muscles better communicate? Imagine being able to compare nerve communications in a healthy body with those in a body that experiences epileptic seizures, and then use electrical stimulation via the sutrode to treat the condition.

"We need to keep exploring the unknown, take risks and be brave. The sutrode did not exist two years ago - if we can come this far in 24 months, imagine what can be achieved in another year's time, and another year after that."