Rise of the Himalaya

The rise of the Himalaya profoundly altered the global climate and the mountains still influence weather systems today.

We all want to know where we come from. Archaeologists dig into our human history, palaeontologists piece together our evolutionary origins, astronomers look back in time at the stars.

So too geologists, such as Dr Solomon Buckman, who study the jagged history of the Earth's tectonic crust. Over millions of years, continents have rifted apart and collided with others to create mountain ranges and oceans deep - and it is all preserved in rock.

In the Himalaya lays a story of oceanic origins. Dividing India from Tibet, the Himalayas' reign as the highest mountain range in the world goes unquestioned but geologists are still dissecting evidence to pinpoint precisely how and when these mountains began to form.

"Continental collisions change the face of the Earth," says Dr Buckman, Senior Lecturer in the School of Earth and Environmental Sciences at the University of Wollongong (UOW). The rise of the Himalaya profoundly altered the global climate and the mountains still influence weather systems today.

Understanding their origins means we can more accurately reconstruct the Earth's fractured history. But the mountains do not give up their secrets easily.

The mountains are calling

To geologists, the Himalaya are a dizzy high-altitude delight.

"This is one of the best natural laboratories for studying geological processes," Dr Buckman says of Ladakh in north-west India. Here, where the air is thin and Tibetan prayer flags catch the wind, Dr Buckman conducts fieldwork to map, sample and date rocks along the Spontang Massif, an outcrop which has attracted the attention of geologists for more than a century.

"Six thousand-metre mountains fall away to 3,000-metre valleys and it's all arid. The folds in the crust are exposed and you can see the geology plastered there in front of you - a cross-section through the Himalaya," he says excitedly.

"The Himalaya are an active plate boundary where you see processes that have been happening for millions of years, that are ongoing and that are happening now."

Folds in the rock, static as they may seem, are a mark of the colossal forces that continue to shape the surface of the Earth, where tectonic plates jostle and bump against each other.

"The Himalaya are an active plate boundary where you see processes that have been happening for millions of years, that are ongoing and that are happening now," Dr Buckman continues. "India is still colliding with Asia and the Himalaya are still being uplifted."

Joining Dr Buckman on his latest trip to Ladakh were PhD candidates Jessica Walsh and Wanchese Saktura. For all the many expeditions to the Himalaya, there are still parts of the mountain chain that have rarely been studied, posing a challenge to these young geologists.

"We're trying to go to a new place where people haven't really done much research, find a few pieces of new evidence and try to join it to this overarching big picture of how the Himalaya formed," Mr Saktura says.

"The modern mountain that we see is just the final collision. Before that, there's a long history."

Ladakh in north-west India is one of the best natural laboratories for studying geological processes.

India began its journey north towards Eurasia millions of years ago. It was a big move: the Indian subcontinent rifted away from the ancient southern supercontinent, Gondwana, where it had fit snuggly between Africa and Antarctica, and was dragged northward by a fringe of heavy ocean crust that began to sink beneath Eurasia.

"Continents are buoyant and don't like to subduct under another," Dr Buckman explains. "But ocean crust is much denser and sinks back into the mantle. Sometimes that ocean crust is attached to other continents and when it sinks, it pulls the continent along with it."

India was pulled into the northern hemisphere where it slammed into Asia. Both continental plates buckled on impact. One wedged underneath the other, pulled deeper by the ocean crust.

"There is a new school of thought that India first collided with a chain of volcanic islands somewhere along the equator before a continental collision."

"An entire ocean, the Tethys Ocean, was consumed between those two continents," Dr Buckman remarks. "And that's why we've got the Tibetan Plateau stretching beyond the Himalaya because the northern part of the Indian continent is underneath Eurasia."

Occasionally, rare fragments of ocean crust are preserved in continental collisions, caught in the suture zone between two continents and elevated to great heights as mountains form.

Called ophiolites, these fragments are what Dr Buckman and his team look for in Ladakh: the only remnants of the once vast Tethys Ocean that separated India from Asia when they were part of Gondwana and Laurasia. Looking at these ophiolites, the story of the Himalaya goes back further than we first thought.

The Himalaya are used as a textbook example of plate tectonics at work, where one continent collides with another, but as geologists collect and analyse more samples, fitting their findings to what has been done before, the timing and nature of the collision has been debated.

The chunks of ocean crust that have been preserved atop mountains in Ladakh, collectively named the Spontang Ophiolite, suggest that there may have been an earlier event - somewhere out in the Tethys Ocean - that preceded the continental collision between India and Asia.

"There is a new school of thought that India first collided with a chain of volcanic islands somewhere along the equator in the Tethys Ocean before a second collision, which is the continental collision," Dr Buckman explains. 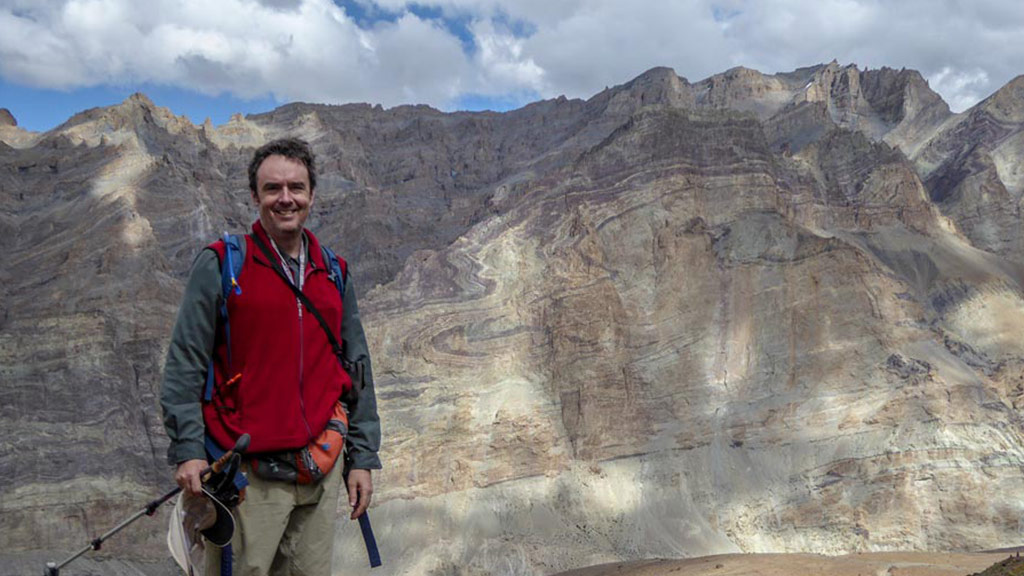 "The folds in the crust are exposed and you can see the geology plastered there in front of you - a cross-section through the Himalaya." - Dr Sol Buckman.

Before India made its way toward Asia, a fragment of the Australian continent had broken away, opening the Tethys Ocean. When India made its move, at some point that oceanic crust was thrust up onto the northern margin of the subcontinent and carried toward Asia.

"It marks the first phase of mountain building activity that initiated the uplift of the Himalaya," Dr Buckman says. He wants to know precisely how and when that first collision occurred: "That's what we're trying to test by looking at these ophiolites and other rocks along the suture zone."

"If we know the age of the rock, and we know where it formed in terms of latitude, we can start to reconstruct exactly where these island arcs were forming in the Tethys Ocean. That way, we can provide really accurate tectonic reconstructions of the whole opening and closing of the ocean, and the collision of India and Asia."

In Ladakh, near the remote village of Photoksar in the Zanskar Ranges, Dr Buckman, Ms Walsh and Mr Saktura scour the rocky mountains for ophiolites. They returned from their most recent expedition with more than 400 kilograms of samples taken from the uppermost layers of ocean crust.

Of special interest are the gabbros, which form underwater when magma spurts through cracks in the ocean crust. Pillow basalts, the shape of mushroom clouds, set fast first and the gabbro cools slowly underneath.

"These rocks are really difficult to date," Dr Buckman says. "But if we're lucky, there'll be little patches that contain very small quantities of zircons that we can extract." 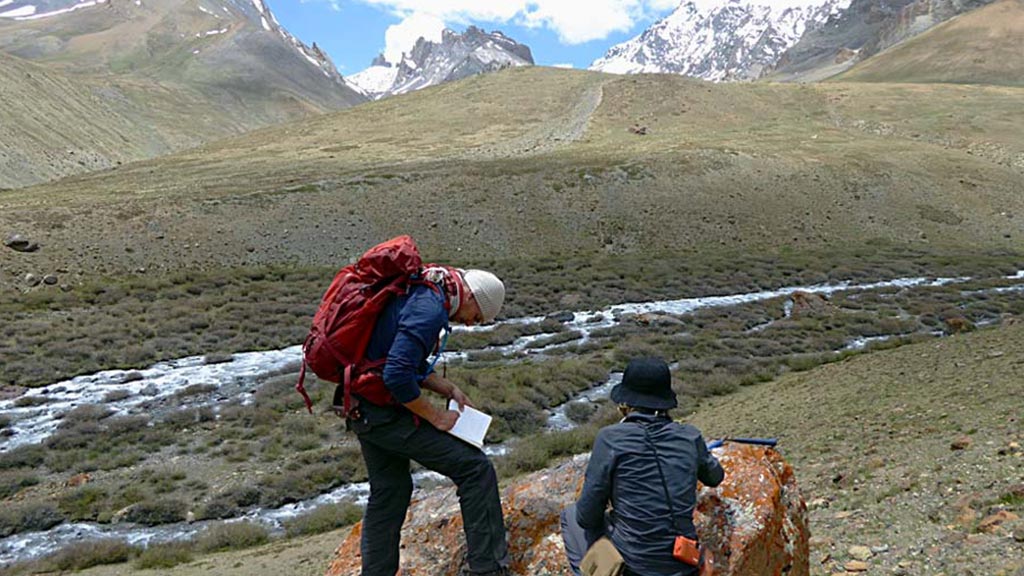 The size of a pinhead, formed from traces of zirconium, these tiny crystals are the last finicky fraction to solidify. In a few kilograms of gabbro there might be only 12 teeny zircons but they hold many mighty secrets.

"Zircons are like little time capsules," Ms Walsh adds. "They've got uranium and lead inside them and based on radioactive decay over time, we can get an approximate age of one of those grains."

Looking at other elements trapped in the zircons also reveals whether the ophiolites formed close to any continent or in the depths of the ocean.

"What we found was that they formed 135 million years ago far from the influence of any continental crust," Dr Buckman says of their most recent published paper, which carefully reconstructs events in the Tethys Ocean and exposes oceanic processes that gave rise to volcanic island arcs as the Tethys rifted further apart.

"We think they formed somewhere along the equator between India and Asia and then ramped up onto India about 55 million years ago," he says.

"Zircons are like little time capsules. They've got uranium and lead inside them and based on radioactive decay over time, we can get an approximate age of one of those grains."

Their findings add to evidence put forward by other Australian geologists, whom Dr Buckman has worked with, which suggests that India only collided with Asia 35 million years ago after India had picked up the ophiolites in question in the Tethys.

The next step is to date zircons collected from sedimentary rocks surrounding the Spontang Ophiolite that were grated when the ocean crust was thrust up onto India, Dr Buckman says.

"I'm hoping they will tell us exactly when the ophiolite was in place on India. We'll be working on these samples for another few years yet."

"The scales that we work on as geologists is one of the most notable things," Ms Walsh says, reflecting on the year's fieldwork and ongoing lab analysis. "In the Himalaya, everything is massive. On every scale. The erosion is huge, the river incisions, the mountains themselves - everything is just enormous. You go from mountain ranges down to the micro-scale."

At the lab bench, Ms Walsh has been working to further constrain the age of the Spongtang Ophiolite by analysing marine microfossils preserved in deep ocean rocks. She classifies different species of radiolarians, microscopic creatures which fall to the ocean floor when they die, their geometric skeletons fossilised in a layer of sedimentary ooze when it hardens into rock. 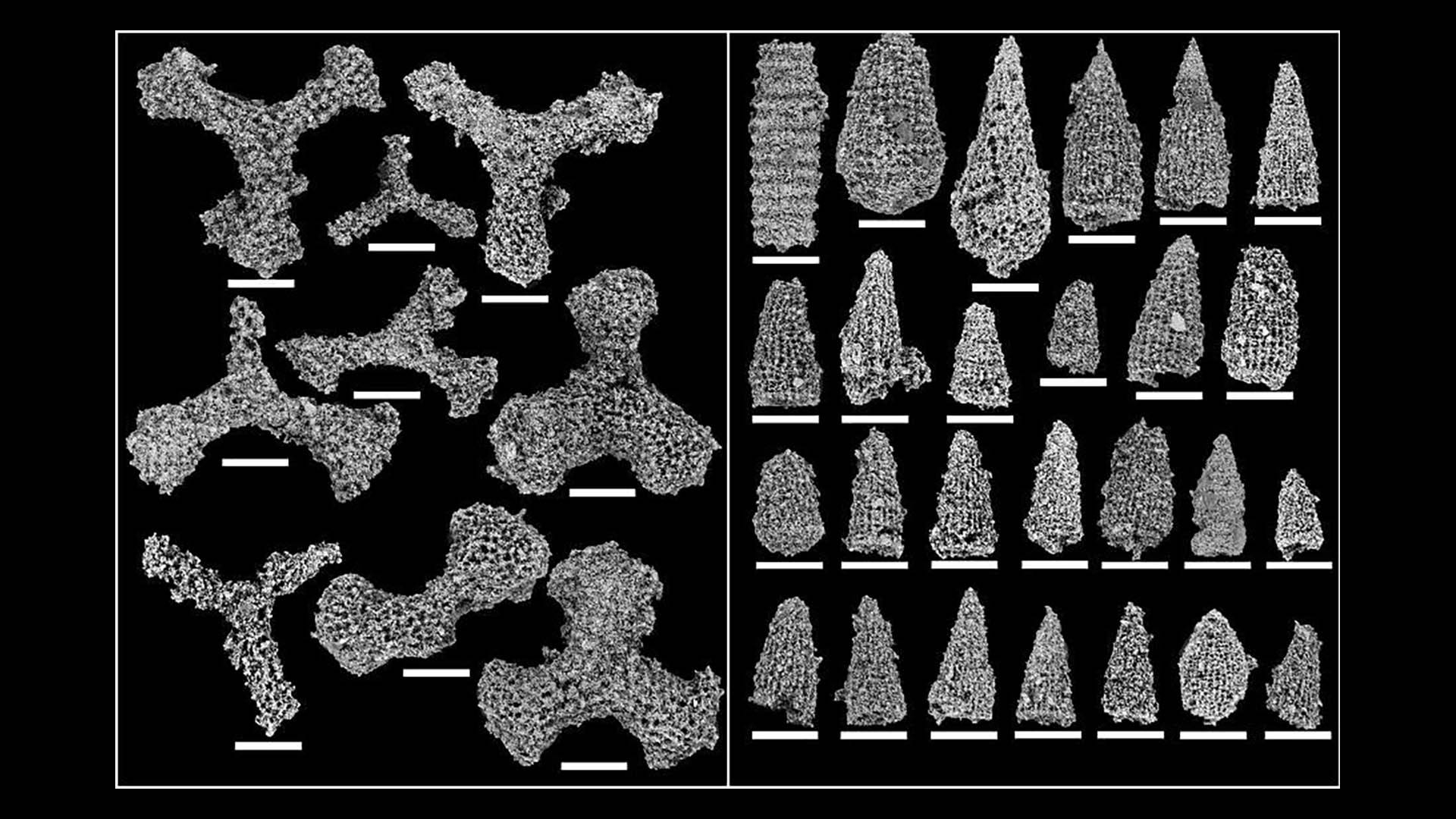 Radiolarians are microscopic creatures that fall to the ocean floor when they die, their geometric skeletons fossilised in a layer of sedimentary ooze when it hardens into rock. "Based on the different species which existed in different geological time periods, you can tell how old the rock was." - Jessica Walsh.

"If we're lucky, radiolarians are preserved. Based on the different species which existed in different geological time periods, you can tell how old the rock was," Ms Walsh explains.

Meanwhile, Mr Saktura has been studying other rocks from Ladakh adopting a novel technique for dating grains of quartz to understand how fast the Himalaya are uplifting to this day.

"If I can figure that out, I'll be able to tell how quickly the piece of rock I'm holding has been moving up to the surface and how fast the Himalaya are growing in a particular region," he says.

Dr Buckman talks about geology with the same excitement as his students. He loves it because geology draws on other disciplines of science in its pursuit to understand prehistoric worlds.

"You need to be looking at chemistry, geochronology, physics and biology to bring it all back together and work out where these rocks formed."