How theatre is helping Vanuatu protect its fisheries

Sustaining fisheries for generations to come.

A team of UOW researchers are behind an initiative that uses theatre to educate remote villages about the importance of sustaining fisheries for generations to come.

Patrick Atel and Liliane Tasso were born to act. The two actors ooze confidence, showing off their mix of cheerfulness and honesty, and both are sharp as a tack when it comes to explaining crucial topics addressed on the community tour of Twist mo Spin.

“The main message in this play is that it’s important for communities to look after the ocean and the creatures in it. Ultimately, it’s their responsibility to manage Vanuatu’s resources for future generations,” Patrick says as he readies himself for a performance in front of the small community of Enkofo, on the island of Tanna.

Patrick and Liliane are part of the 13-person cast of Twist mo Spin (meaning twist and spin in English) and it is the latest production to come out of the ever-popular, Vanuatu-based, Wan Smolbag Theatre Company.

The play has been developed in partnership with the Vanuatu Fisheries Department (VFD), with funding from SwedBio and the Australian Government through the Pathways Project. Pathways is a collaboration between university researchers and South Pacific agencies to support community-based approaches to coastal fisheries management. The research focuses on strengthening island village fisheries programs in Kiribati, the Solomon Islands, and Vanuatu.

Twist mo Spin tells a story of a young couple, Lyn and Jason, returning to Jason’s home island. Along the way the play deals with issues of love, poverty, empowerment, and well, a lot of fishing. But by the time Lyn has her fifth child, things have changed at the small island fishing village, particular around the reef where the locals have almost fished out their island hamlet.

It seems the local fishermen and women have continually used small hooks and undersized nets to catch fish, so many of the sea creatures are no longer easy to find or have disappeared from the area all together. Some villagers even have to resort to tin fish when they cannot catch fish at all.

Dr Dirk Steenbergen, a Research Fellow at the Australian National Centre for Ocean Resources and Security (ANCORS), based at the University of Wollongong, says the play is part of an initiative to reach more people in remote parts of the South Pacific.

“In Vanuatu, the spoken word, through music, storytelling and play, has been central to communicating history and culture for hundreds of years. With fish playing a huge role in the lives of the people in Vanuatu not only for food but also income, the play Twist mo Spin was the perfect way to get the message out to communities about how to look after coastal fisheries and how to manage them.”

My role with the play, that was done by Wan Smolbag, we asked the project to develop the script together with Wan Smolbag, going through the narratives and also going with Wan Smolbag to feature various communities for Wan Smolbag to get a feel of the community, the issues around the community, to talk to women in the community, to talk to men in the community, fishers in the community.
Every society tells stories and every society likes plays and films. I mean Netflix, you know, it's just how we all actually operate and I don't think it's specific to Vanuatu but if information is harder to get to people here because lots of people don't read.
ANCORS coordinates the regional pathways project and I lead the country program in Vanuatu. And as part of the pathways project, ANCORS partners up with the Vanuatu Fisheries Department and under this initiative we have created a partnership with Wan Smolbag theatre group in Vanuatu to develop an innovative way of disseminating information and increasing awareness in communities through theme.
So there's there's been all sorts of campaigns on how to get information out to these very remote communities and one idea that came up at the start of the pathways was to work with this theatre group, given that Melanesian culture, storytelling, theatre, song - it's all means of spreading ideas and stories. So the idea and the pathways was to partner with Wan Smolbag, believed a theatre group and develop a play that would bring forward some of the issues around coastal fisheries management and not necessarily provide solutions but allow a space for people to discuss ideas, to bring out some of the challenges that they have and get a discussion going together in with with the FDP with water fisheries.
Some of the facilities use data identified within the play mainly around size limits, mainly around population core and the need to eat fish.
Not just fishing but on the reef but also sort of gender issues and what impact the women had on the reef and the way they fished the reef and the way men fished the reef and the pressures on families at village level and their need for money and balancing that with maintaining species in healthy numbers on the roof.
And people love songs and they they love watching actors it's exciting and I think to be honest actors of way better facilitators than most people.
I'd say it's quite exciting to see people react to what we what we're putting on in place, especially about the about the fisheries, and I can see from the community's points of views how we go around and about showing our plays and during our after play workshops with them some of the things that they don't know before they've know been they they know now.
And so just being able to see the impacts and the repercussions of that play tells you that it is working, it is getting people to think about the future, it is getting people to think about how they're using the resources right now.
[Music]

The Wan Smolbag Theatre Company has become well-known for promoting community action and creating awareness on challenging issues through television and community-based theatre productions. The non-government organisation (NGO), founded by Peter Walker and partner Jo Dorras, have performed throughout the South Pacific since 1989 and is the South Pacific’s only full-time theatre group, with all the actors been Pacific Islanders.

“The tradition of popular theatre has proven a really effective way of spreading information, particularly in areas where many people cannot read or write, or where access to a radio or television is non-existent,” says lead script writer Jo Dorras, or Mamma Jo as the actors call her.

The English school teacher turned script writer explains that theatre works well in a community setting because it captures the interest of a wide range of community members and then provides a space for them to reflect and discuss openly the problems or conflicts the play may present. Also, audience members are usually able to better remember and apply the information to their own lives.

“The script for the play was developed in close collaboration with the Vanuatu Fisheries Department,” Jo says.

“I think addressing coastal fisheries and fishing practice is really important in the South Pacific. Not only does fishing represent a cornerstone in the local cultural identity, but teaching communities about sustainable fish management gives locals a real sense of ownership and stewardship, along with improving people’s livelihoods.”

Twist mo Spin also addresses other issues such as the role women play in village life, local governance, co-operation with-in the community, and caring for the environment.

After each community play, the men, women and young people are able to share their opinions with each other and come up with ways they can address declining fisheries in a post-play workshop.

Then the actors record basic demographic information about the audience and collect various comments from audience members about their thoughts on the play, including any issues it raised. This feedback is passed on to VFD and international collaborators under the Pathways Program.

Pita Neihapi, fisheries officer at VFD, says the community audience discussions are a great way to start the conversation on how they can manage their own resources and seek help from government organisations and services.

He says the government can offer guidelines and advice through projects such as Pathways, but the ultimate responsibility resides within the communities to determine how best to manage their resources.

“So far performances of Twist mo Spin, have been really well received by village audiences in a number of island locations around Vanuatu. Local communities are concerned with reductions in fish numbers, this means there are some pretty lively discussions during the post play workshops. This is good because it gets them thinking how can we change things,” Mr Neihapi says.

Dr Steenbergen nods in agreement. He says that by using theatre to communicate critical messages around nutrition, livelihoods, and inclusive decision-making, the Pathways team seek to develop a platform through which discussion and information exchange can take place in communities.

“Twist mo Spin is the perfect opportunity to bring the power of theatre to educate communities,” Dr Steenbergen says. 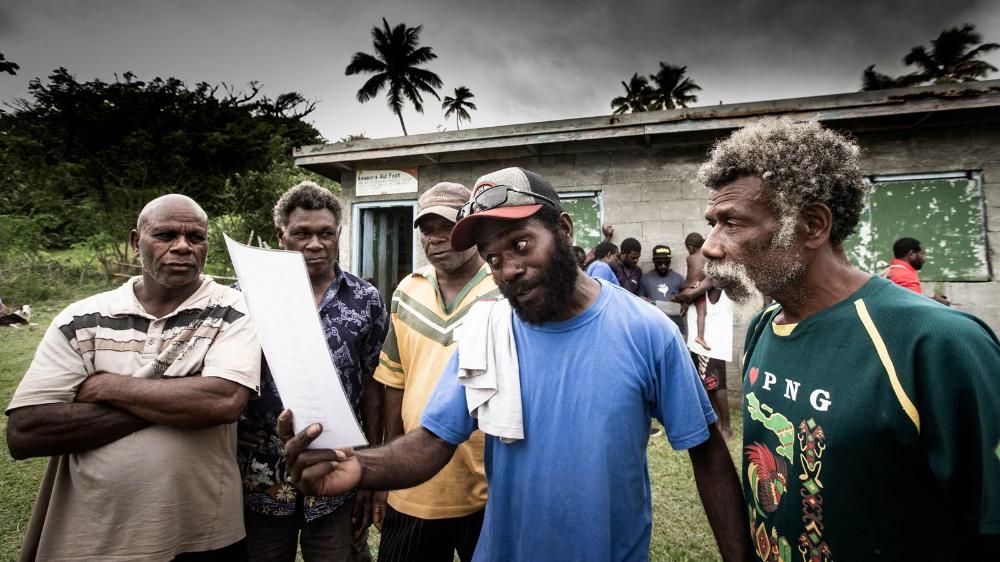