The race to save Chloe Saxby

How advances in stem cell research could be the key to understanding a rare brain disease.

On the surface, Chloe Saxby is just like any other nine-year-old girl.

She loves hash browns from McDonalds, always bickers with her 13-year-old sister Madeleine, and has a particular fondness for rainbows.

However, after a nasty vomiting virus at just three-and-a-half years old, Chloe found it difficult to balance, walk or stand up without support.

Eight months later and after extensive testing, her parents were given the news every parent dreads.

Chloe was diagnosed with Vanishing White Matter Disease (VWM), an extremely rare, degenerative brain disease for which there is no cure. Until recently, only two researchers in the world were looking into the disease, one based in the Netherlands and the other in Israel.

So what exactly is Vanishing White Matter Disease?

Also known as Childhood Ataxia with Central Nervous System Hypomyelination, the disease destroys myelin, the brain's white matter, which over time leads to an inability to walk, talk and eat, as well as blindness, deafness, loss of motor skills, mental retardation, spasticity, seizures and coma.

Around seven cases of VWM have been reported in Australia with less than 200 known cases worldwide. That's roughly a one in 42 million chance of having the disease.

"A small bump to the head, a temperature, a cold or even a fright could end Chloe's life," says Nyree Saxby, Chloe's mother.

The average life expectancy of a child diagnosed with VWM is five to 10 years from onset of the disease. Over the past six years, Nyree has watched Chloe deteriorate to the point where she is wheelchair-bound and relies on round-the-clock support to do basic tasks. 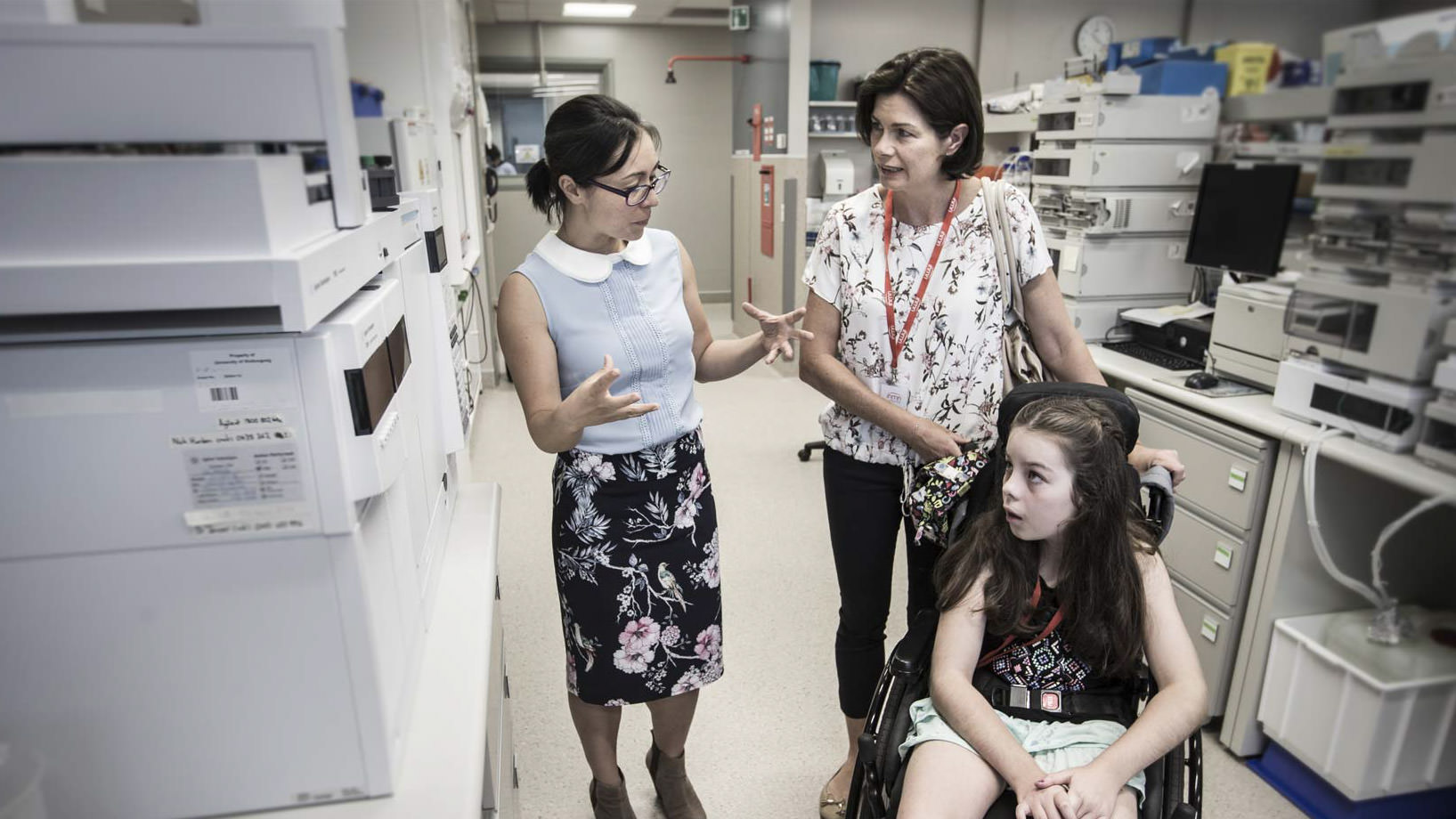 "Every single day I see my youngest daughter Chloe in pain and I know that what she is experiencing now is nothing compared to what is to come for her if a cure for VWM disease is not found," she says.

"The hardest part as a parent is to watch my little girl die before my very eyes."

When University of Wollongong (UOW) and Illawarra Health and Medical Research Institute (IHMRI) researcher Dr Justin Yerbury heard Chloe's story in 2017, following a special fundraising event organised by Dr Yoke Berry at Wollongong's Israeli Film Festival, he reached out to Nyree to see what could be done to help young Chloe.

Diseases in a dish

At the cutting edge of disease modelling and drug discovery is Dr Lezanne Ooi, a neuroscientist who joined UOW and the team at IHMRI from the United Kingdom in 2012.

With a background in biochemistry and experience in the neuroscience research department of a leading UK pharmaceuticals company, Dr Ooi was approached by Dr Yerbury to head up the UOW-led research team into VWM. 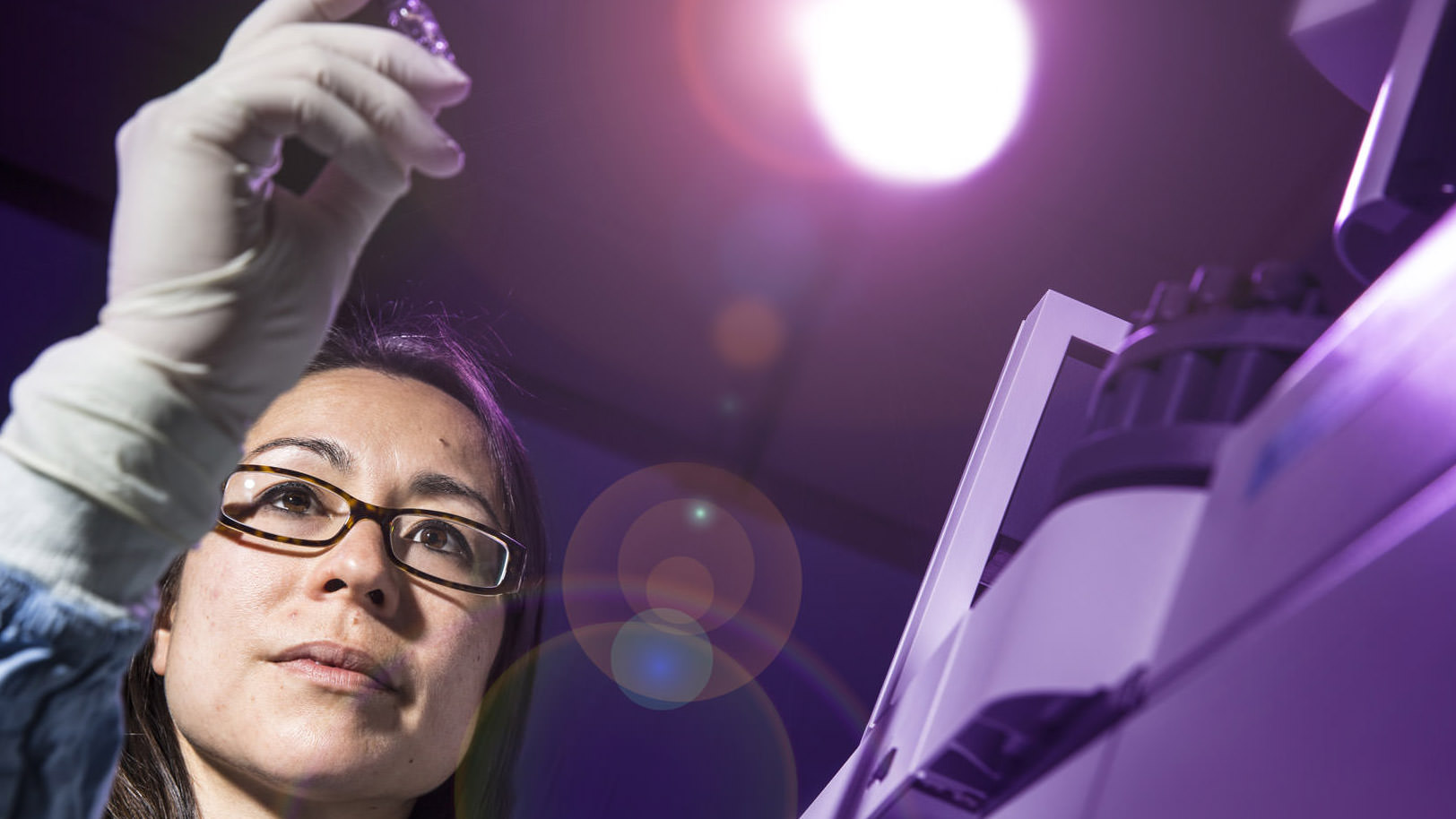 "Justin [Dr Yerbury] came to me and said it would be great if we could do something for Chloe, and we talked about how that would work and what would need to happen. When we approached the IHMRI Executive they really got on board with the research we were proposing," she says.

"Diseases of the brain are quite difficult to investigate on a cellular level because you can't access living brain tissue from patients," Dr Ooi says.

"Working alongside clinicians, we use donated skin cells and convert them into stem cells in the lab. These stem cells then go through another process to make the different cell types of the brain.

"We're trying to understand in a dish what happens to cells from people with those diseases. By using this method, we can try to gain an understanding of how diseases progress and how disease course could be altered or stopped."

And that brings us to Chloe Saxby and the elusive Vanishing White Matter Disease.

By using the same process, described as disease modelling, the team at IHMRI are working to understand exactly why Chloe's white matter is being attacked from within, and potentially identify drugs that could help Chloe and children like her.

Described as an industrial revolution for biosciences, IHMRI will soon be receiving a state-of-the-art robot that will speed up the process of cell analysis and significantly reduce lab time for researchers.

IHMRI Executive Director and CEO Professor David Adams said the new technology would give the Institute the first high-throughput automated patch-clamp facility in Australia, one of only a few in the world, and would lead to new drug discoveries.

"This facility represents a quantum leap in productivity for biosciences in this country," he said.

Until now, researchers have been able to look at the properties of brain cells in a dish and it has been a slow and laborious process, assessing the cells one by one.

Using the new piece of equipment with its patch-clamp technique, researchers will be able to move from looking at one cell to looking at 384 cells at a time.

"This is a huge leap forward in terms of the amount of information we can get per day," Dr Ooi says.

"In the case of Chloe Saxby, we can use this equipment to understand the difference between her cells compared to people that don't have VWM, and also look at testing drugs on those cells."

Developing a better understanding of diseases in a dish opens new doors for researchers to develop personalised medicine.

"There have been a lot of drug trials that have failed in the clinic, but we know that people respond to drugs differently depending on their particular genetic makeup," Dr Ooi says.

"It means that if you've got cells from an individual in the dish and those cells respond in a certain way to a drug, then that can inform whether the drug either may or may not be effective for them.

"We're essentially trying to understand how we could use cells from patients to develop patient specific treatments."

Although researchers at IHMRI will be using new technologies and new methods in the race to save Chloe Saxby, research associated with rare diseases is not without its challenges.

With only two other researchers in the world currently looking at VWM, little is known about the disease and its devastating impacts.

"Because they [rare diseases] are not researched as heavily, if at all, much less is known about the mechanisms that cause the disease," Dr Ooi says.

Another major challenge, says Dr Ooi, is how hard researchers have to fight for funding.

"Pharmaceutical companies are not interested in studying rare diseases so research falls to academic researchers that are passionate about certain causes.

"There's a finite amount of money for research in general, so especially for rare diseases we rely quite heavily on philanthropic funding from donations and charities."

Nyree has spent the past two years fundraising for research into VWM to be undertaken overseas through the Saving Chloe Saxby campaign.

"As a small charity raising funds for an extremely rare disease, it can be very difficult to get large scale support and the type of funding that we need to save Chloe's life and the lives of children like her, which is why it is so important for us to receive support from the community and other organisations," she says.

Lezanne is joining Nyree in a community effort to raise funds for research into VWM to continue at IHMRI past the initial seed funding phase.

In March she will be taking part in the 2018 Great Illawarra Walk alongside a team of researchers and staff from the University of Wollongong, with hopes to raise more than $150,000 to contribute to ongoing research.

"We're in a race against time and the only thing standing in the way of saving our little girl is funding," Nyree says.