What if the coming shortage is not of water, but of storage?

Water is in demand all over the world. But if the coming shortage is not of water, but of storage, then we need to rethink how we capture, store, treat and recycle this most precious of resources.

Of the 7 billion people on this planet, two-thirds already experience severe water scarcity at least one month per year. Cape Town, the second largest city in South Africa, was and still is counting down the days until it runs out of water and this has been a wake-up call to cities around the globe, Sydney and Perth no less.

We cannot take water for granted, the United Nation says. There is enough fresh water on the planet for everyone but not where it is needed and where water flows easily, we waste it, drain it and pollute it.

The question is, if we are not short on water per se, then how are we capturing and using that resource – and how can we do better?

As an engineer who specialises in water, Professor Muttucumaru Sivakumar traces its flow from the source to the sea through all the cracks in between. Water is essential for life – the source of life and sustainable communities, he argues. If water is scarce, then food production, health and education all suffer.

“Almost all of the Sustainable Development Goals [set by the United Nations to transform our world by 2030] are connected to water in some way,” Sivakumar says. “You can’t have sustainable development without a sustainable water supply.”

Not only is the world population growing, it’s changing too: “In the world, we have just passed the 50 per cent mark of people living in urban areas,” Professor Sivakumar remarks. “There is a move towards the suburbs and cities.” And with it, the water.

In Australia, almost 70 per cent of us live in capital cities on the coast and yet most of our water comes from inland surface dams built hundreds of kilometres upstream. “Living in urban environments requires services coming from everywhere – and water is one of the most essential,” Professor Sivakumar explains.

His focus is on improving the infrastructure that we use to capture, store and move water. Australian dams are under pressure from bulging cities and big agriculture – a midlife crisis as Professor Sivakumar puts it. “We need to find other ways of storing water,” he says.

No new large dams are being built – the last was in 1994 for Perth and before that, 1987 in Darwin – with steadfast community opposition to any proposed construction. Australia is also the driest inhabited continent on Earth so we need to capture what we can.

Dam levels fell to as low as 25 per cent in Melbourne and 33 per cent for Sydney during the Millennium Drought, the worst drought on record for south-east Australia.

“What the major water authorities in Australia have done is drought-proof our water supply by building desalination plants,” Professor Sivakumar explains.

Perth relies heavily on its desalination plant but removing salt and minerals from seawater is costly and energy-intensive. Desalination plants sit idly beside Sydney and Melbourne on standby mode until water levels fall again.

Think outside the box

Where dams are built upstream, coastal reservoirs store fresh water offshore or inside a large estuary. Positioned at the base of a river system, they can collect runoff from the whole catchment when water flows are high. Fresh water is contained by a soft barrage that hangs inside a second solid seaward barrier. The water is treated to remove contaminants and pumped to nearby cities.

The Qingcaosha Reservoir (image below) constructed to service Shanghai is the biggest coastal reservoir in the world and the first of its kind. Nestled against Changxing Island in the Yangtze River, the reservoir partitions water from the river without halting its flow. “It’s supplying water for more than 10 million people,” Professor Sivakumar remarks.

To water resource engineers like Yang and Sivakumar, coastal reservoirs are a logical choice, one that could capitalise on high coastal rainfall to bolster urban water supplies, but the pair will need to assess the feasibility and impact of coastal reservoirs at Australian sites.

“If there is water coming, then we need to capture it right,” Professor Sivakumar says.

Isabella Svinos is not so sure that water is getting to the people who need it.

In her final year of study and interning with the Australian Institute of International Affairs (AIIA), she is focusing on environmental politics – who is involved in conflicts over natural resources, their interests and influence.

In the case of the Murray-Darling Basin – which straddles four states – politicians, water authorities and farmers can’t agree on reforms to manage the water used by 3 million people in Queensland, New South Wales, Victoria and South Australia. Water levels are low and tensions are high.

The multibillion-dollar Murray-Darling Basin Plan was introduced in 2012 to regulate how much water could be taken out by certain people in certain states, but it has not delivered water back to the river as promised. Wetlands are drying up and small communities downstream are losing out.

“There are some communities in rural Victoria and South Australia who in the last two years have been faced with severe water shortages,” Svinos says. “It was up to the states to enforce the plan, but it has fallen apart.”

The plan relies on compliance but investigations have alleged that big irrigators are profiting from inadequate enforcement measures, hoarding water and going so far as to tamper with water meters to take more than their fair share.

“Over eighty per cent of water from the Basin is directed to agricultural industries,” Svinos explains, namely cotton, cattle and rice, but they are sucking our waterways dry. “We need to see big changes made to the way we manage our water.”

Tough regulation on agriculture and industry is a must. “Change can be swift but industry and lobby groups are going to push back. They need to find ways to reuse and recycle the water they’ve already got.” The same goes for us.

Water scarcity is only going to get worse as we see the effects of climate change kick in, and we all could use water more efficiently.

Svinos wants to take it up with local government. “You can’t govern with a blanket policy. There is never going to be one solution that suits everyone,” she says, reflecting on what she has learnt studying the Murray-Darling Basin Plan.

“Not just in water policy but in different areas, including energy, you need to be more localised than the federal government,” she continues. “Local councils need to be deciding what the best technology is to use in that area and what measures should be put in place.”

“We need to start doing something about this now – not when we have another drought.”

Indeed, some people are taking matters into their own hands. 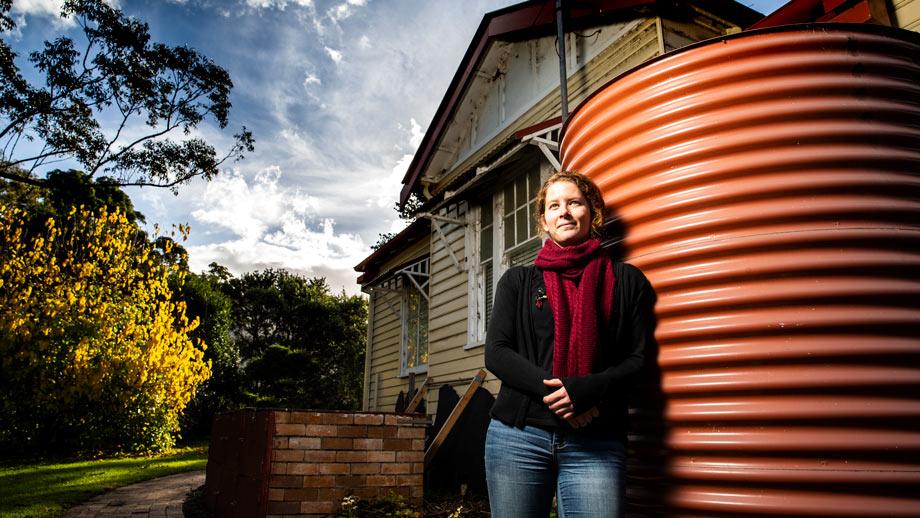 Carrie Wilkinson grew up on tank water just outside of Batemans Bay on the South Coast of New South Wales. When rain was forecasted, her dad would run a hose from their catchment tank to the household tank to make sure one was ready to catch as much rain as possible.

“The South Coast is typically dry in the winter and very wet in summer. It’s all about capitalising on the boom and bust rainfall pattern when you’re wholly reliant on water tanks,” she explains.

Returning to her roots, Wilkinson has been studying residential water tank use on the South Coast for her PhD with the Australian Centre for Cultural Environmental Research. She surveyed over 200 households and interviewed 50 more from the coastal towns of South Durras, Congo, Bingie and Meringo, and inland at Nelligen to understand their motivations for being self-sufficient for water.

“Most households had at least two rainwater tanks. Many had three, with several on acreage having five or six. The residents I interviewed, they’ve all invested in the infrastructure for their homes to suit their needs,” she says.

There are many benefits of being self-sufficient in water, which Wilkinson has documented in her research. She says you have to be flexible and inventive, and you become more engaged with where you live.

“A lot of participants talked with great pride about the skills that they had learnt to manage their water,” Wilkinson says. “You’re the CEO of your water company. You’re in charge.”

Many households had been living on tank water for decades, and most were not concerned about water shortages. “They were confident they could manage – that they could get through dry times without tapping into bigger water systems.

“People were more concerned with the water they were wasting. They were reusing and recycling water as many times as possible.”

Wilkinson is encouraging of urban households that install water tanks and hopes that we can learn from the resilience of self-sufficient communities. “They have all this knowledge, skills and experience that can translate to bigger conversations [on water shortages].”

Many people in her study lived on blocks similar in size to lots in the Illawarra. “Our cities are sprawling, but there’s so much potential to do more. A lot of people have tanks beneath their houses.”

Reducing our water usage is an easy starting point. A person in Sydney uses on average about 295 litres a day without thinking about where that water comes from. “It was one of those stats that I had to keep reading and ask, ‘Am I reading this correctly?’” Wilkinson says, shocked by the numbers.

Living on tank water dramatically changes your behaviour, she says, until it just becomes something in the back of your mind.

“You are far more aware of the water that you consume when you rely on water tanks,” she says. “Your water source is a right next to your house, not a dam hundreds of kilometres away.”