From grisly murder cases to serial killers, what is it about tragedy that fascinates us?

On 17 June, 1994, Dominos Pizza sales hit a then record high. Not because of a genius marketing campaign or a special offer - it was because of our fascination with crime.

About 95 million people worldwide tuned into the live broadcast of a low-speed car chase as O.J. Simpson led police on a pursuit across Los Angeles in his Ford Bronco. People refused to leave their TV screens, leading to a busy day for pizza delivery.

The hour-long pursuit unfolded after Simpson was suspected of murdering his ex-wife Nichole Simpson and her friend Ron Goldman. Fascination continued during the trial, with an even larger viewership for the final verdict in 1995. The case itself has been described as the most publicised criminal trial in American history.

More recently, what started out as a little-known documentary series, Making a Murderer drew in 19.3 million views in its first 35 days on Netflix. Filmed over the course of 10 years, the series follows the case of Steven Avery, who served 18 years for a wrongful conviction. After a short taste of freedom, he fronted court again over new murder charges, which still has viewers divided.

An audience snowballed and today people continue debating theories as they play detective from their couch at home. Avery's attorneys have gained a celebrity status, presenting at conferences across the globe as the legal battle continues, prompting producers to work on season two.

Whether it's a car crash, an assault or some of the most grisly murder cases, fascination with true crime fills our news bulletins. The more notorious examples are often adapted into documentaries, books and television series. Psychology Lecturer and Criminologist Dr Tracey Woolrych, from UOW's School of Psychology, says this captivation is nothing new.

"Crime has always been a source of fascination, from the bible to Salem and witch trials," she says. "Literature about crime has been around for years and years, we just have many more ways of accessing it in the media these days than we used to."

So why are humans so interested in murder, serial killings and bizarre crime? In psychology, it comes down to some of the most basic human traits.

The desire to learn or know about anything; inquisitiveness - Macquarie Dictionary

Our inherent need to know is one of the reasons people become so intrigued by murder cases. The O.J. Simpson trial was broadcast live to tens of millions of people, while a cyanide coffee poisoning in Indonesia late last year was broadcast on two national TV stations. It has been dubbed the country's most prominent murder trial and prompted a movement #WeStandForJessica.

These cases expose us to many of the investigative processes. They show evidence and raise questions, which still haven't quite been answered with absolution. Many people still wonder whether the system got it right. Dr Woolrych says our interest in such cases can be associated with our need for certainty.

"We want to know what happens, we want to know the outcome and we like certainty," she says. "One of the dangerous things with real crime is when the line is blurred between fact and fiction.

"The other thing they do is they give us an in," she says. "People think if they have seen crime stories, that they know about crime. They might think they know how a killer thinks and how to do profiling. This is an emotional investment in the program. You're trying to work out who the killer is, am I right or am I wrong?"

A painful feeling of impending danger, evil, trouble, etc.; the feeling or condition of being afraid - Macquarie Dictionary

Fear. We hate it but we also love it. It's the primal instinct that drives adrenaline junkies or compels us to watch a horror movie alone at 2am. When it comes to crime, forensic and clinical psychologist, Associate Professor Mitch Byrne says people overestimate the likelihood of becoming a victim.

Dr Byrne, from UOW's School of Psychology, has worked as a forensic psychologist, including in prisons and aggression management, with some of the people true crime stories are based on. He says the more we are exposed to crime, the more prevalent we think it is, which prompts this feeling of fear. 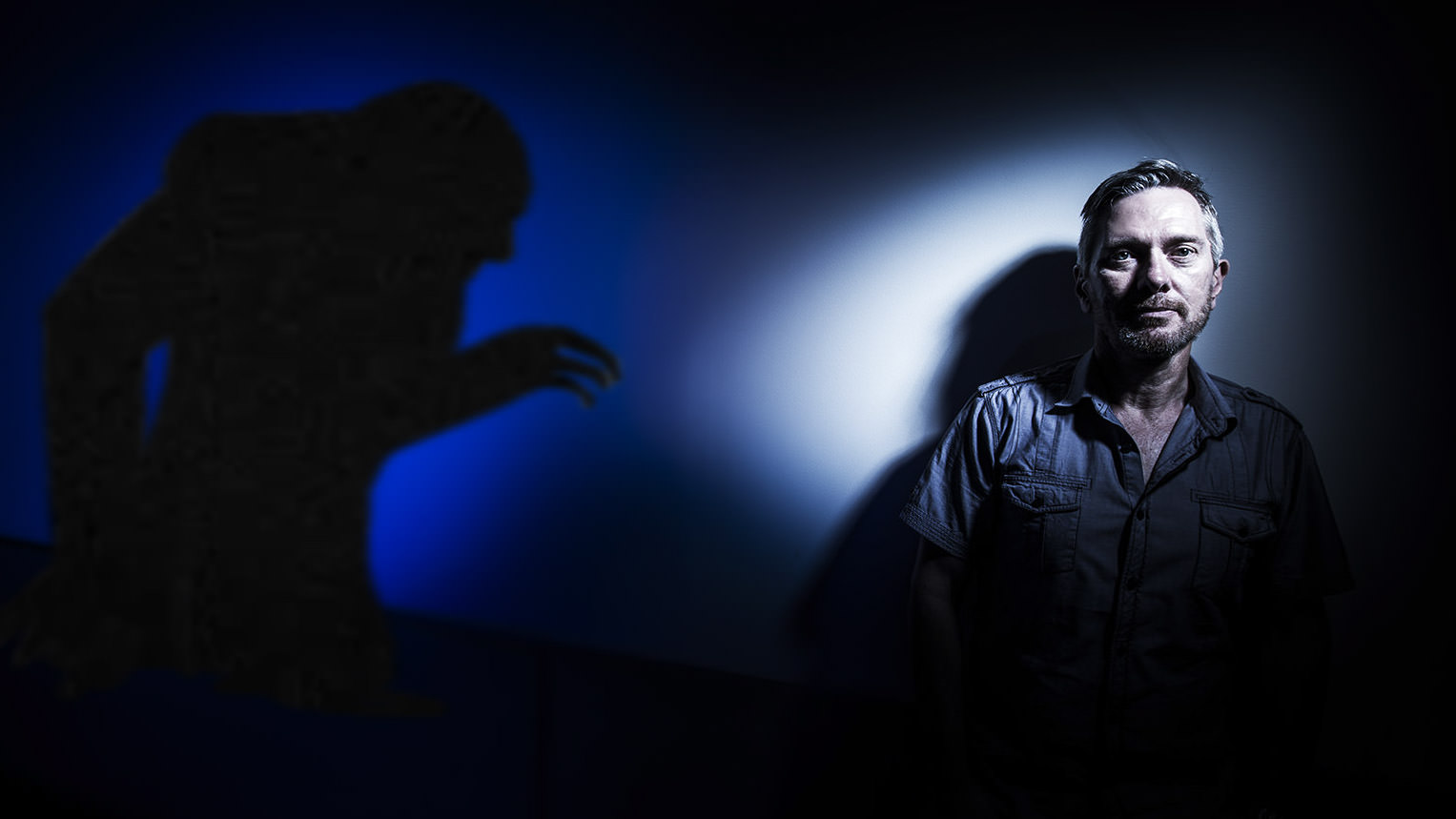 "What feeds the media, feeds news stories, is this general overestimation and vulnerability. People emotionally connect with these bad news stories. If you look at it, 90 per cent of news is bad news stories," Dr Byrne says. "We also have a desire to be frightened, that's the way horror movies work.

"When people connect with the experiences of the victim, that also enlivens their own experience. The visceral reaction they can then have, where their stomach turns or their heart races - we desire that stimulation. It's a safe petrification, as opposed to going out into the worst parts of Wollongong late at night screaming: 'I've got lots of money in my pocket'.

"You can watch a movie and get that same enrichment of your senses. With the connection of it being a true crime, with a desire for stimulation and also with that empathy, it's a perfect storm for people to be fascinated by these stories."

You need only mention Ivan Milat for people to connect the infamous character to the Australian backpacker killings and resulting movie Wolf Creek. Or utter the name Charles Manson to be reminded of the cult leader who inspired Helter Skelter.

Mental entering into the feeling or spirit of a person or thing; appreciative perception or understanding - Macquarie Dictionary

When you come across a crime or an accident and think: "that could have been me" you're practising empathy. It's something we as humans practise every day. Dr Byrne says the more detail we have about a crime, the more we are able to form an emotional connection with the victim, and sometimes even the accused or convicted offender.

"When you have a story that provides detail, that detail makes it easy enough for people to superimpose their own personal details to the ones provided," he says. "A young woman is attacked at a college party. People are aware that happens, but they don't think of themselves.

"When those true stories come out, particularly when they are well written, people want that detail so they can enrich their fantasy life about their vulnerability to these types of crimes and their anxiety if that's the case as well. And when you've got visuals, a picture paints a thousand words - it helps with people placing themselves in that sort of position."

"On some occasions, you can see how anybody under the right circumstances can commit any heinous act."

Principles or habits with respect to right or wrong conduct; ethics - Macquarie Dictionary

Our sense of right and wrong, our ethics and morals are other factors that make us fascinated by true crime stories. Most people want to see justice served. Dr Woolrych says the way people involved in crime are constructed can often feed into our sense of morality.

"You always hear the murderer's full name, and they are not really given a voice, you don't know about their life. The victims are always constructed in a way that you are able to empathise with them because they are a normal regular person in our society and they are a good person - so there is this need for justice.

"We have a view of a just world where good people get good things and bad people get bad things. And these kinds of programs feed into that just world hypothesis that we have."

"I actually don’t think there is that much difference between a criminal and me. But there is something about them that allows them to do the behaviour they do."

What separates you from a murderer?

For Dr Woolrych, our fascination ultimately stems from a mix of the unknown, our need for justice and the thrill. She says we want to unravel the puzzle that is the murderer.

"It's that intrigue, that a criminal mind is somehow different to ours and how could they do it - because I couldn't do it," she says. "I don't understand criminals, I've done criminology and psychology and I actually don't think there is that much difference between a criminal and me.

"But there is something about them that allows them to do the behaviour they do, whereas I don't, that difference is fascinating to me. I don't know what it is, I don't know how to quantify it and I think that's the same as your average Joe in the lounge room. That's why I got into criminology, I was fascinated by people's behaviour that I didn't understand."

Dr Byrne says the lure of true crime stories is much like our interest in anything else.

"The difference, I believe, is we aren't exposed to those sorts of good news stories or those positive aspects of our voyeuristic behaviours of looking at other people's lives and trying to see what's happening inside their lives. We are exposed more to the negativity and to the fear, and fear is a strong driver in the community of many, many things."

While we may be interested in hearing about other people's crime, Dr Byrne says in his experiences, he has learnt what prevents most people from committing them.

"There are different reasons and when you look to yourself, on some occasions, you can see how anybody under the right circumstances can commit any heinous act."