Trumping distrust in the corporate world

How new insights into responsible leadership can help businesses be a force for good.

Mario Fernando can remember the exact moment and place that he realised he was having a career crisis.

Now an Associate Professor of Management at the University of Wollongong's (UOW) Faculty of Business, Fernando had scaled the heights of Sri Lanka's corporate world and at the age of just 32 was an executive and member of the board of directors of one of Sri Lanka's largest corporations.

"We were at dinner at a restaurant that had just opened. We were sitting outside and I can remember the lights that were strung up in the trees to create a nice atmosphere. I was very disillusioned with the corporate world. I was a senior executive with everything but no meaning in life. Something was eating at my soul."

Associate Professor Fernando came from a family of lawyers and was obsessed with studying. He studied law and followed his family's footsteps into practice but to his father's utter dismay, found his heart wasn't in it. He turned to the human resources profession where he thought he found his calling.

"After more than 10 years in managing human resources at the highest level, I told my wife I wasn't happy. We discussed it at length and she suggested (at the time rather sarcastically) that I study this phenomenon as to why a senior corporate executive having a happy married life with two young children and a lucrative corporate career was wanting to throw it all away.

"That started shaping my PhD project problem. It was about my life journey and the associated philosophical questions of purpose of life," Associate Professor Fernando recalls.

UOW · Why responsible leadership is good for business

He was a voracious reader and academically minded, so the idea made sense. The hard part was finding an academic supervisor willing to take on an idea that melded philosophy with more traditional business management concepts.

The result is a body of research, and now a book - Leading Responsibly in the Asian Century - that is the distillation of personal experience and academic endeavour and provides new insights into responsible leadership that are arguably more prescient now than at any other time in recent history.

From his tweets directed at specific companies to his protectionist policy to "buy American, hire American", US President Donald Trump has torn up and thrown out the rule book. Yet, here was an outsider, a self-styled businessman whose appeal to voters was his projection of corporate success and rejection of Washington elites.

Away from politics and in the corporate world, scandals such as the Volkswagen's efforts to dodge emissions legislation and high-profile collapses in the finance sector are creating an atmosphere of distrust in the institutions that uphold democratic society.

The 2017 Edelman Trust Barometer, the 17th survey of more than 33,000 people in 28 countries in the public relations corporation's annual trust and credibility research series, revealed a "global implosion of trust".

The Edelman survey cites practices such as profit shifting, resource plunder with little regard for the local community and environment, offshoring of jobs and fears of the impacts of automation and globalised business as a clutch of factors fuelling people's distrust.

According to Edelman, the macro trend is that more than "two-thirds of the general population do not have confidence that current leaders can address their country's challenges".

"Responsible leadership is urgently needed at all levels of our society," Associate Professor Mario Fernando says.

Certainly, there are corporates who claim to march to a different tune. Google's code of conduct opens with its now-famous motto, "don't be evil", while its parent company Alphabet's code of conduct directs that employees and affiliates "should do the right thing - follow the law, act honorably [sic], and treat each other with respect".

What does it mean to act "honourably"? The word is not common in the language of business. In his book, Associate Professor Fernando has developed a model of what responsible leadership decision making looks like.

"Rather than leadership being viewed as how effective one is at influencing others at achieving goals, responsible leadership integrates effectiveness with responsibility, emphasising that one can't be effective while harming others," Associate Professor Fernando says.

In short, responsible leadership is about leading with integrity and making profits without compromising principles. It builds on the widespread and growing societal expectation that corporations need not only to achieve economic profits, but to deliver on the triple bottom line: profits, planet and people.

"This is a big ask from a business leader. And that the responsibility not only lies on profit maximisation or value creation for the organisation but also for society as a whole, through sustainable, value-creating social change. Effective responsible leaders have a broader, society-wide reach and impact."

It also means that those with the access and ability to speak truth to power when the need arises. A seeming contradiction of the Edelman survey is the finding that while trust is being eroded, the community expects business to lead on social issues.

Out of the big four institutions - business, government, media and non-government organisations - three quarters of respondents said business was the one that could make a real difference to economic and social conditions.

"Business is the last retaining wall for trust," Kathryn Beiser, global chair of Edelman's Corporate practice, says in the survey's accompanying press release. "Its leaders must step up on the issues that matter for society."

However, speaking out on social issues is not without risk for business leaders. A letter from 20 high-profile business leaders urging Prime Minister Malcolm Turnbull to legislate on same-sex marriage drew a rebuke from Immigration Minister Peter Dutton, who said that business leaders needed to stay out of the debate.

Associate Professor Fernando calls it "quietism", when a leader chooses not to act or speak out on important issues. In the US, the first days of the Trump presidency led to a clash with the then acting Attorney General Sally Yates, who had directed Justice Department lawyers not to defend his controversial travel ban on people from seven Muslim-majority countries, citing doubts the order was lawful.

"Just as Yates did, this is the time to show the opposite of 'quietism' and show 'responsible courage'. I know Yates had just a few days left on her employment when she took this courageous action, but despite this, these types of actions can have ripple effects and ultimately influence change in the administration.

"Whistleblowers are perfect examples of people who are ready to take this type of action, despite the consequences."

Associate Professor Fernando says leaders can show a range of responsible leadership behaviours, from the ethically mute, who don't appear to be taking a lead in responsibility, to the ethically active, who recognise the need to act and then do so.

"If a leader fails to recognise the need to take responsible action, then the leader is subject to criticism by the public for not living up to the normative expectations of society," Associate Professor Fernando says.

"In the context of responsible leadership, recent leadership decisions from the US demonstrate weak relational intelligence; not appearing to painstakingly strategise an action before putting it out to the public. Strong relational intelligence could ensure that all stakeholders are fully engaged and involved in the decision-making process before taking action that affects them." 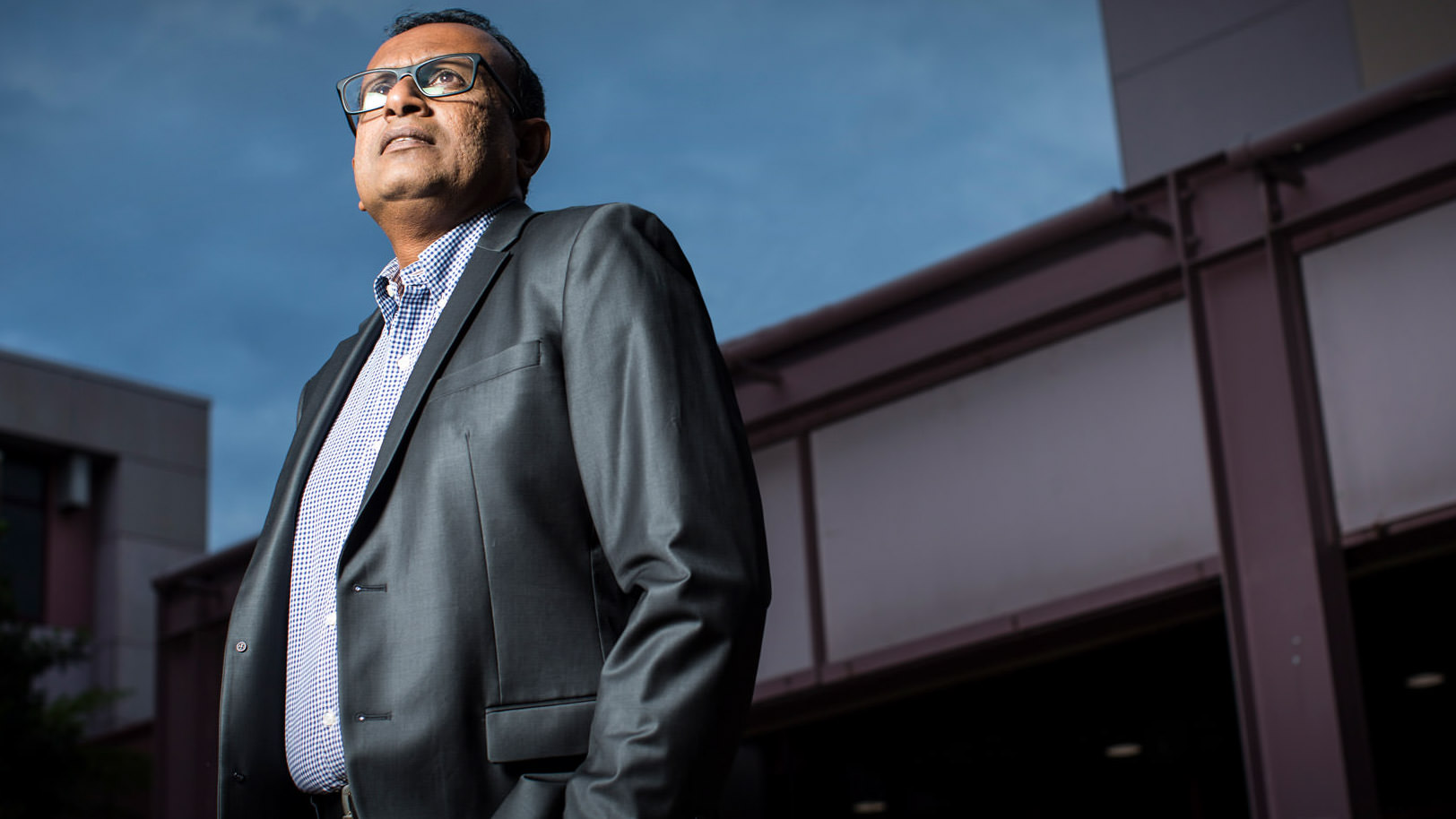 The building blocks of responsible leadership

In his book, Associate Professor Fernando pulls no punches in blaming the dearth of ethical education in business courses as a great contributor to creating business schools that are breeding grounds for capitalists without conscience.

"The recent corporate scandals, such as at Volkswagen and Barclays, JPMorgan Chase, Goldman Sachs and other banks, suggest not simply morality problems, but something more serious: business schools have been charged with incubating criminals," he writes.

He argues that imposing more regulation is not the only answer to stemming the rise in corporate scandals, or to encourage responsible courage. Instead, change needs to come from within the corporate world through responsible leadership. The argument that businesses should stick to business, that markets don't have moral compasses doesn't wash with him.

Platforms like LinkedIn and other news websites for management professionals are laden with articles about being a great leader. There are critics of the idea of leadership, management professor Henry Mintzberg for example, who say that too much value is invested in the idea of leadership, and it has developed into a kind of mythical hero-worship rather than focussing on the necessary practical and human skills involved with management.

"I am of the view that we need leaders to guide us through situations to lead us to achieving goals," Associate Professor Fernando says. "Whether leadership is centrally located in one individual or across several leaders (distributed leadership), there is a distinguishable process called leadership."

Associate Professor Fernando says teaching responsible leadership should be different to teaching other types of leadership approaches. He points to the flaws in our basic human nature. The classic tension between us and others.

Whether it be the sliding down the slippery slope, being blinded by self-serving bias, falling for peer pressure or simply obedience to authority, good people will commit unethical acts. According to Associate Professor Fernando, this is where teaching that integrates ethics into business and management courses comes to the fore.

"This teaching should not be limited merely to teaching of what responsible leadership is; the theory. The how and why, the practice, are very important to understand why students should bother with another leadership approach on top of those approaches that are already out there.

"There should be ways in which to address these basic human tendencies to engage in unethical acts, particularly when in power. I am very happy that ethics teaching is now happening in our schools. We need to start very young, exposing children to basic norms of society."

Associate Professor Fernando recalls a time in 2009 when he was developing a new undergraduate business subject. The idea of responsible leadership was a rarity in research literature and in practice. He drew on his personal experience and his academic work to create what is now a core subject for undergraduate management students and the theme is being further developed for inclusion in UOW's Sydney Business School MBA program.

"I doubt that it will ever be labelled as another management fad," he says of the growing awareness of the need for this type of teaching. I think back to that realisation I had, at that restaurant in Colombo.

"I now recognise that I had the courage to say no to the highly materialistic world I was in. I sacrificed a lot but I'm happy."